Persistence of memory, The Blitz | 7 comments

The Lockwood family lived on Rosebery Road in Norwich, number 65 a very ordinary little terrace in a row of terraces nestling in the sea of shoe factory workers houses between St Clements Hill and Angel Road, not far from Angel Road School. In the Picture above we have Hilda, or mum, who would have been in her mid thirties when this was taken, Cheeky Jack who was about six and Beryl who would have been about eight. On the right we have Alfred the dad. Hilda would soon fall pregnant with child number three; Margaret.

I know this because our neighbour and friend Ralph Gayton gave me this picture, they’re his cousins, his aunt and his uncle. Ralph knows about my interest in the Norwich blitz which I suspect relates really to my family on my dad’s side surviving the one in London somehow; mostly by sitting under a table as far as I can work out. Ralph’s house stands next to another Jack’s; a spritely and amenable 88 year old D-Day veteran, his house show those typical above ground signs of the attacks of 1942, damaged brickwork and detailing, it was rebuilt, Ralph and Brenda’s escaped most of the damage, next to Jack the house is new and doesn’t quite fit the pattern of the Edwardian terraces around it, this is of course another story as none of them lived here then, other people did, but they did live in Norwich and know the stories. Jack is a bit sensitive to these things he says and can sense the turmoil in the house. I’m a sceptic, but when he said it it still made the hairs on my neck feel like I’ve stuck a knife in a toaster.

Ralph’s uncle Alfred was an ARP Warden, at nearly 40 presumed to be past his best as a fighting man and therefore safer at home. He’d do his day job and then come the evening stick on a steel helmet, slip on an armband, a gas mask case would be dropped over his shoulder, and he’d stroll out into the evening and go and do what Air Raid Precautions officers do, which was partly the ever predictable stereotypical ‘Dad’s Army’ shouting “turn that light out” at people but also included making sure things were running tickerty boo, and of course should there be an air raid, he’d have to stay out and help put out incendiaries, report trouble and go to the aid of those caught up in the mess that dropping thousands of pounds of high explosive on a largely civilian population brings to life.

A daunting task, assuming a raid happened, but nothing much had happened, it had been quiet for months, nothing, no tip and run raids, nothing much at all, just the dark of the night and the chit chat and the cupped-handed crafty fags at the ARP post.

In the afternoon of the 27th of April 1942, Ralph’s Aunt Hilda and cousins had been over to Knowsley Road to play, he remembers it quite well. Mucking about in the house and garden, tired from the warmth of the day Ralph said goodbye to his cousins and went home. Alfred came home from work, ate something and then went out again as his duty required, leaving his family including now three 3 month old Margaret and stepped out into the dogged evening, the light extending towards the summer as the sirens yelled and the second of the worst bombing raids that Norwich was to suffer started. His post was at Angel Road School not far away. The men hunkered down for a night of it, brave enough to stay out in the filth the night threw down come rain or snow and indeed anything else.

This night was to be a different thing, much later at around 11.20 the sirens sounded, this time not a test, no radar plus confusion over other Luftwaffe operations over the North Sea allowed the raiders to get nearly up to the coast before being detected, flying in under a radio silence, guided onto the crossing radio beams of The X-Geraet radar that homed in on the City Station site in the North of the city. Norwich was almost unprotected, it had been deemed that despite vague threats from Lord Haw Haw on the radio that there was not much need to protect Norwich or the suburbs, The Heinkel III pathfinders flew in, dropping five Chadelier flare markers; huge multiple lights that swung in the sky slowly descending, bending and moving the shadows in the eerie bluey-white magnesium light, people accustomed to staying in bed for the normally hollow sirens scrambled for a mixture of Anderson, Morrison and street and park communal shelters. The mixed stream of Junkers 88s and Dornier 217s from Kampfgeschwader 2 followed them in and began to bomb onto the marked targets, first with High Explosive to open the buildings up, then over again with incendiaries to start fires in the shattered wood and tar paper. Chances of survival unharmed as an ARP must have seemed very low on a night like that, hot metal, tiles and brick flying about, incendiaries falling, the smoke, the din, your city on fire, rushing about trying to put out incendiaries as aircraft climbed and dived, shooting in from West to East, coming in again and again. Even hardened veterans of the Great War who’d donned the familar helmet again commented on how exposed you felt compared to life in the trenches.

Caught napping the RAF managed to get a small number of night fighters up from Coltishall, Bofors guns fired from round the city with little affect, nothing much could really be done, The Bombers had free reign to bomb and re-bomb, circle and strafe, the 25 aircraft continued until quarter-to-two when their munitions spent they left the city shattered and burning.

When Alfred returned his house, mind, hair and skin filled with the night it still stood. There was blast damage everywhere, but the house was intact, It can’t have been longer than seconds until he realised that all was not well, in fact it was dreadful, that unimagineable thing. The back garden had received a direct hit; his family and the neighbour were in the Anderson shelter, built to withstand falling rubble, masonry and blast but not a bomb; his entire family were killed, Hilda, Beryl, Jack and Margaret, all gone in one hit. I don’t know what happened next, Ralph didn’t elaborate, this was enough for me to hear and more than he could stand to say any more about, he still feels it so keenly now. We moved on to other things.

The whole family were laid to rest together in the mass grave for victims of the raids in the Earlham Cemetery, The family bought a large headstone which was placed on the plot, a black marble affair; you can see it in an EAFA clip on their website. This was eventually removed and the memorial garden built where they lie along with other the victims of that and the following nights of the Baedeker Raids of the Norwich blitz.

Addenda 29th April 2017: Ralph has just given me a transcript of the circumstances exactly as he remembers them, quoted here:

April, 1942 is a day, and night, that I remember very well. My Aunt Hilda and her three children, my cousins Beryl aged 11, Jack, 7, and baby Margaret, 3 months, visited our house at Knowsley Road that afternoon. It was a very pleasant.Spring day with warm sunshine. Jack and I played together while Aunt Hilda and my mother chatted in the back yard. Beryl played with her baby sister, The family had walked to Knowsley Road from their home at 65 Rosebery Road, except Beryl who had come on her bicycle-a reward for passing the 11 plus exam that February the ‘scholarship’ as it was known in those days. She was looking forward to moving to the Blyth Secondary School quite near her home the following September. Hilda’s husband Alfred, my mother’s brother, worked at the Norwich company of Boulton and Paul. He was also an Air Raid Warden based on the Wardens Post at the nearby Angel Road School.

The family left us to walk home at about 5 o’clock and I well remember by friend Malcolm, who lived nearby laughing as we watched Beryl wobbling down the road on her bicycle.

That night Norwich suffered one of the biggest German Ajr Raids of the war-one of a series of raids by the German Luftwaffe on English historic towns and cities known as the ‘Baedeker Raids, named after a German guide book and in reprisal for a British raid on the historic German city of Lübeck. As I recall, the raid started at about 11 o’clock that night. It was a heavy raid and it went on for what seemed like an eternity with the earth shaking with the explosions.

It was the following morning that we learned from a neighbour that Rosebery Road had been hit and that our aunt and uncle’s house at 65 had been destroyed, along with others. My Aunt and the three cousins had been killed, along their neighbours, Mr and Mrs Whall while sheltering in their air raid shelter. My uncle Alfred had survived as he was at the Warden Centre during the raid and was one of the first on the scene. 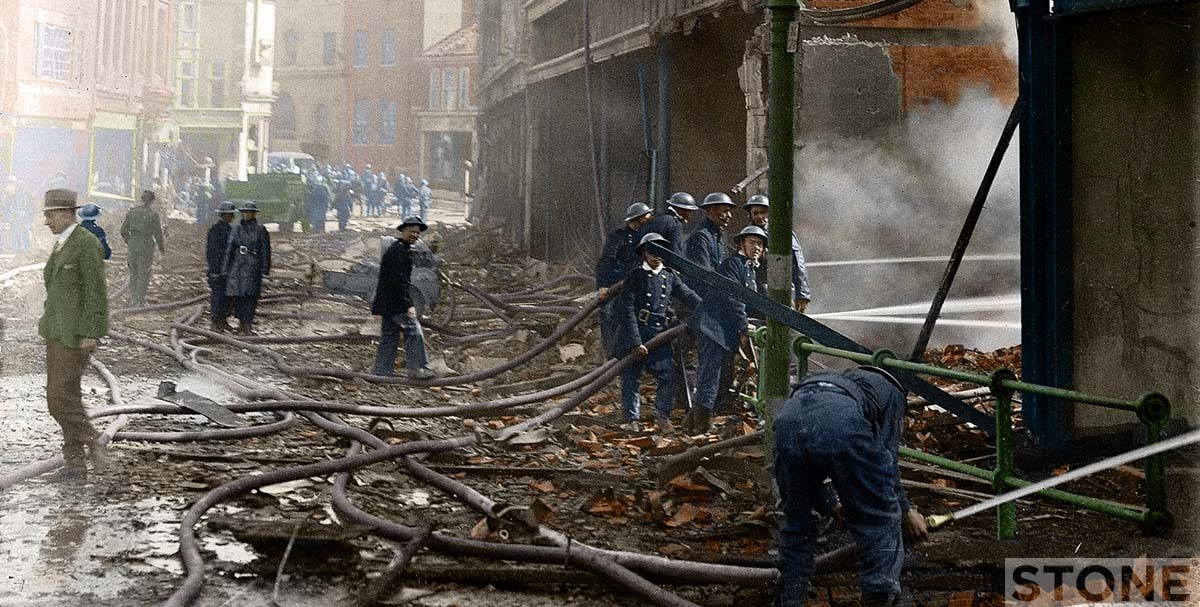 The workhorse and the charger