Barrack Street is pretty dull these days, a humdrum piece of grey carriageway winding through crossings and traffic islands as it links the Magdalen Street flyover to the nexus; Mousehold, Plumstead, Kett’s Heights or along Riverside. It’s the epitomy of ‘Innerlink’ roads a distillation of how transport can kill a locale. Once this was an area of dense housing; two churches side by side, numerous pubs, an overhang of Tudor leaning into each other and the road, it featured the splendid Pockthorpe brewery building, pubs and shops, and bristled with people. The road has forced the houses back into a defensive position behind a berm countering noise but separating the community from the road as banks of step-like flats rise up St James Hill over what was the Cavalry Barracks and later the Horse barracks which leave only their name in the street. There are a few more clues to the past; Cavalry Drive and more notably Hassett Close echoing the landscape once occupied by Hassett’s Hall up on the rise in the crook of land almost opposite Cow Tower, beneath which lay the former hamlet which became the city parish of Pockthorpe just outside the city wall. The hall built on the edge of the glacial heath long since gone, demolished for the barracks, the barracks gone for flats, and here we are right now.

The outer curve of the river feeds down meeting Riverside, this is where the river and access road fostered the probably the densest dwellings, built up against the wall on the inside and later outside over the protective wet ditch that drained into the River Wensum where the wall terminates. This riverbank until recently still featured dense housing; arcs of council flats ran up to Jarrold Print works industry hidden behind a metropolitan 1930’s brick frontage, This too has all vanished weeds and a car park surrounded by hoardings; a desert created by the faltering tides of capitalism as developers turned there collars up as the profit margins tipped down.

It’s a cold day and the light is lowering, the sun just tipping over the trees enough to get off a few rounds at the rather lovely and reasonably complete corner tower, despite the plastic surgery it’s had it still looks the part. This is one of the more accessible parts of the wall, sitting as it does just off Barrack Street on the corner of Silver Road. One thing that struck me as I lurked was how little people register it, it’s just another part of our frame of reference the visible made visually inviable by 800 years of familiarity, Just somewhere where dogs piss in the dark, migratory shopping trollies hide in the flora and fauna of cans, tetra packs and crisp packets under a vaulted roof that’s seen more summers than any of us will. It is a really obvious bit of the old that sticks up into the new and it’s not just a tower it also has a rather nice piece of arcading running up and vanishing into a line of flats that terminate where Bull Close recently changed course turning and cutting through into the city like an invader smashing another hole in the long gone wall in our more recent past. One of the roadside walls has flint in it, I’ve wondered for years as I’ve sat bored in the car at the roundabout if that’s some robbed flint from the thirteenth century packed and repacked into something else, a wall becomes a wall becomes a wall.

The corner tower also has a line of flint that runs down to the road, that marks the line of the wall as it heads off down to the gate that sat astride what is now a pedestrian crossing. It reappears on the other side of the road and disappears under the hoardings, where more remains sit jammed into a weed patch that I clambered through in the heat of the late summer last year on some stupid whim. It a reasonable stretch that’s not immediately obvious and not entirely authentic, heavily rebuilt it also form the wall of an industrial unit, which isn’t that unusual as a lot of the wall formed bits of other things, Magpie Road in particular until recently had one stretch covered by a pub and one part by a garage that became a printer, other long stretches we take for granted on a daily basis formed the back walls of terraces. This part was largely built up to for a lot of its life slum tenements built right over it up to the river edge tower with Water Lane on the outside, which itself was built up to and not at various points in time. You can should you fancy a trip through bramble, nettle and wasp-land go and see the remnants, the most obvious of which is a fireplace sitting there exposed on the inner line. 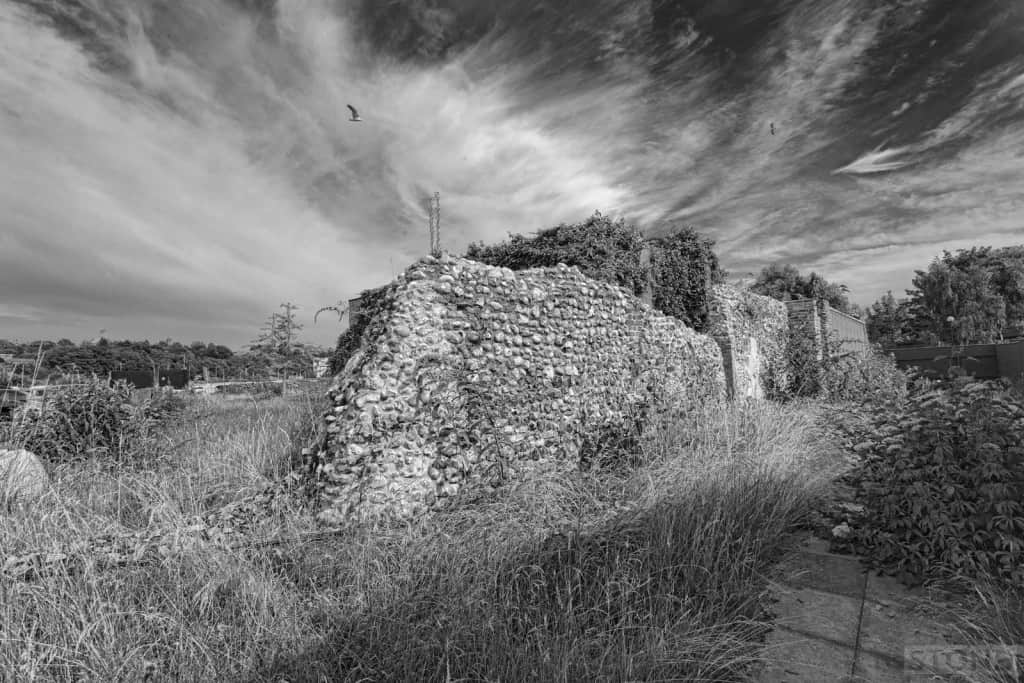 Pockthorpe or Barre gate itself was no real beauty. There is a Pockthorpe brewery advert I’ve seen in a local pub that shows an illustrator’s imagined view of it with the castle like brewery behind even though it had long gone when it was drawn in the early twentieth century, probably based on , an illustrator after Ninham himself after John Kirkpatrick, with some influence from other maps that show towers that it didn’t have I have no copy of it myself which makes me grind my teeth slightly. But we have Ninham’s drawings and the etchings that follow and that gives a clue to this quite narrow gateway which says a lot about the demise of all the gates in an expanding city. It had seen some things, partially rebuilt after being badly damaged by Kett’s Men in the dangerous summer days of 1549. in the seventeenth century when Norwich was in the thrall of largely Parliamentary support the gates was ramped with earth to prevent any attack on the Ironsides garrisoned and supplied within. In 1792 it ceased to exist, pulled down, even Ninham himself missed seeing it by two years. Two year or Two hundred and twenty-two there’s not much in it if it’s not there, we’ve all missed out it would seem, next time you drive through ghosts, they are there in your imagination.