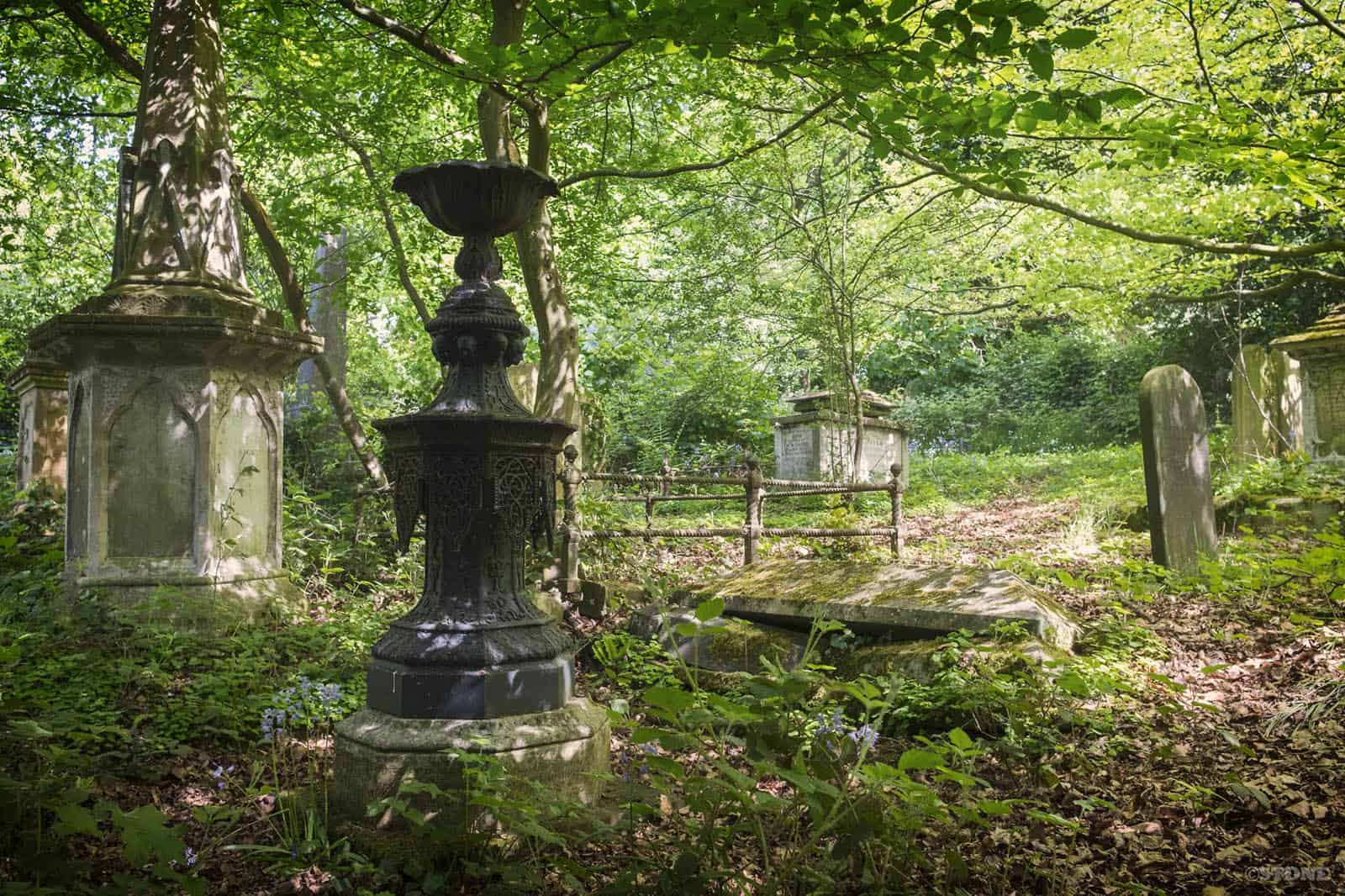 My inclination was to put this into the hidden history category, but then I remembered how often I end up sauntering around with people I’ve never met, but whose names I can see, in the light and shadows of trees and bushes and stone and thought it all sort of needed a new category. Rosary also isn’t exactly hidden either, it’s quite well known locally and the extension is still in use as a burial ground. It is also fascinating, not least because it’s one of the first truly non-denominational burial grounds in Britain but also because, in the nature of these places like Highgate, Tower Hamlets and the rest of the Magnificent Seven in London or Pere Lechaise and Montmartre in Paris. It is representative of a change in funerary custom in Britain at a point where everything else in most major cities was getting rather full of dead people, Europe also was far less uptight about a cemetery necessarily having a church attached to it.. The point had already been long since met in Paris where it was simpler and more sanitary to dig people up and move them into catacombs than risk the seeping dead killing the living by fouling watercourses and market squares. Something that was returned by testing the pump water at  St John Maddermarket which was alleged to pour forth pure essence of churchyard. The now defunct pump is still there a the base of the churchyard near the head shop. 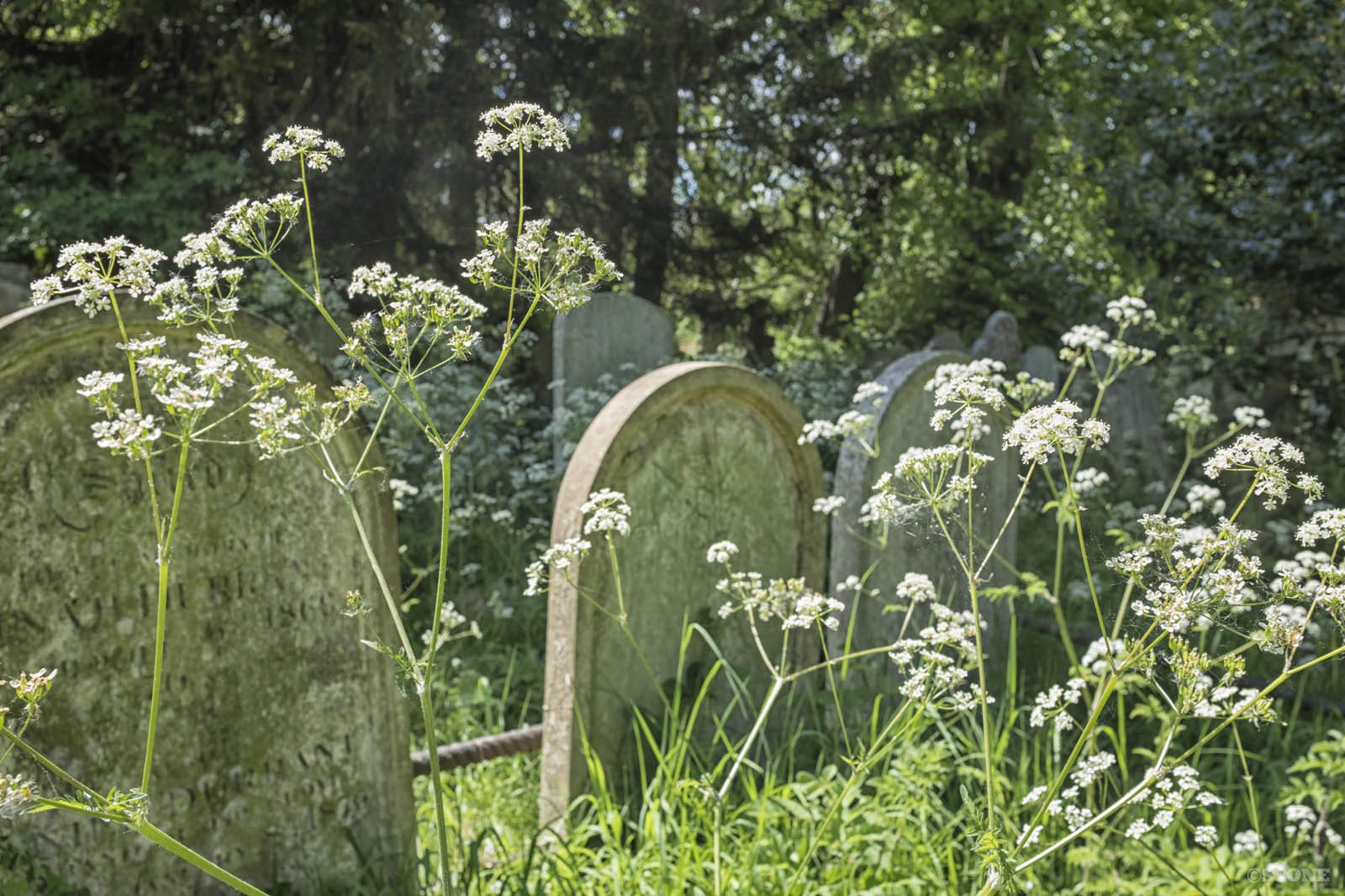 We never really reached the point of building charnel houses or ossuries in the city, but as mentioned elsewhere you only need to look at the height of a lot of the city centre cemeteries to see how full of those that once lived here they must be, layer upon layer of burial gradually pushing the ground height up, bowing retaining walls out fighting against the straining tide of population growth post-industrialisation; Norwich itself almost doubled in population in the first half of the 19th century. One of the main problems being when you put lots of people in a small space and don’t have adequate healthcare diseases tend to remove portions of that population. Outbreaks of disease aside from earlier outbreaks of the plague were common, with Cholera and Typhoid being exceptionally adept at unsheathing the scythe and filling the ground with citizens in the first half of the century. 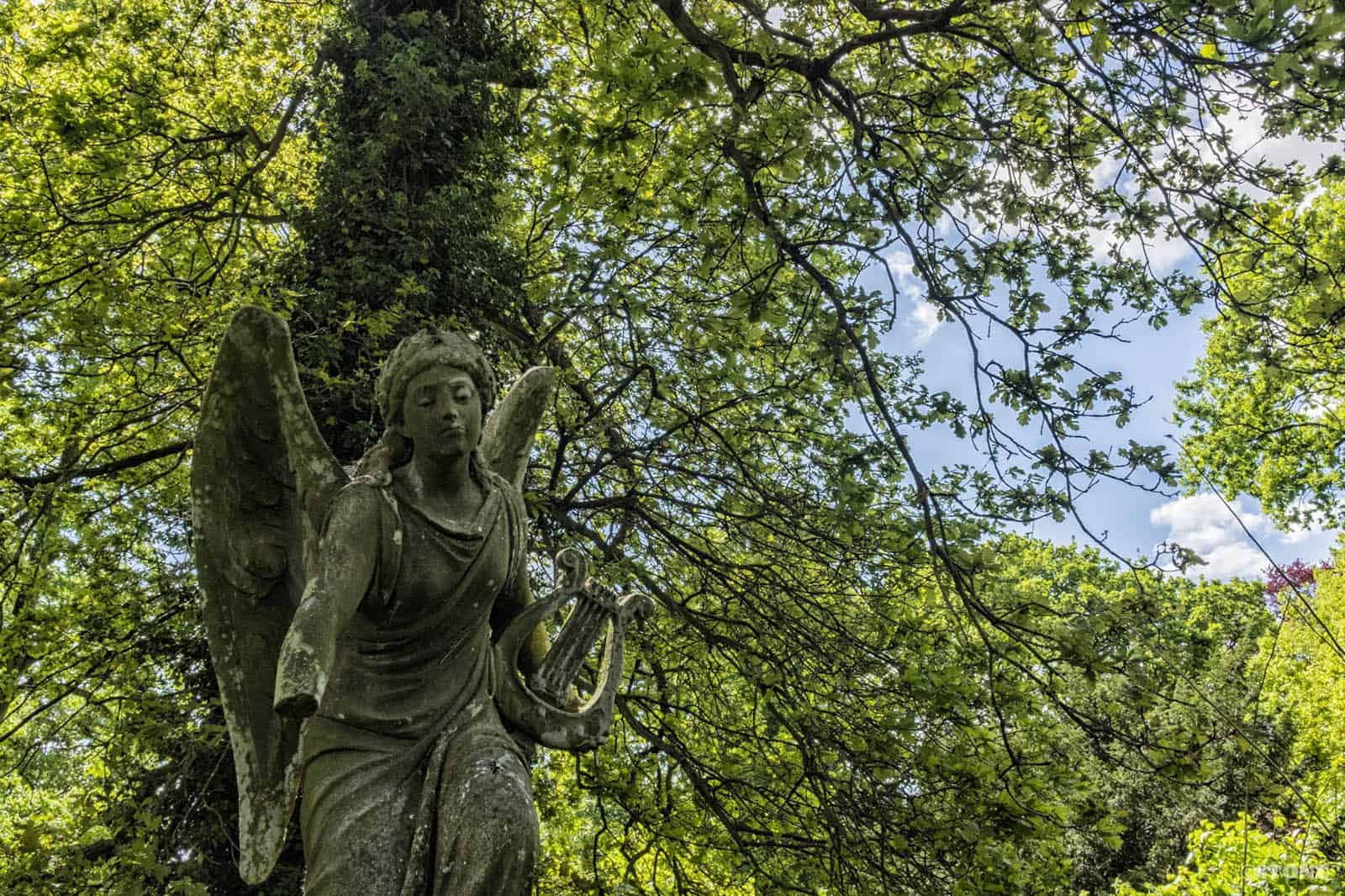 The Rosary was laid out in 1819 and opened shortly afterwards by The Reverend Thomas Drummond a Presbyterian/Unitarian Minister. It beat the opening of the new municipal corporation cemetery at Earlham by over 30 years, when burial was finally banned inside the city walls.  Unconsecrated, it didn’t present the problems that Anglican burial grounds did; any denomination, an unchristened child; a suicide victim or someone of a different faith could be buried here, something that non-conformists and dissenters were all to aware of at a time when a Baptist, Methodist or Congregationalist could only be buried in a churchyard if it was agreed to hold an Anglican ceremony. Similarly you couldn’t get married in a church, attend Oxford or Cambridge University and were expected to pay the church rate, even though you probably weren’t using it because you met in the forerunner of the bingo hall.

There were already a few independent burial grounds in existence; The Unitarians have a small plot around the Octagon in Colegate, there were two Jewish burial grounds; a small one just off Quaker’s Lane and St Crispin’s and another at Horn’s Lane/Mariner’s Lane. The Quakers have a large and elegantly understated space of beautifully regimented rows at rest in Gildencroft next to what was the Quaker meeting house before a bomb destroyed it in 1942. 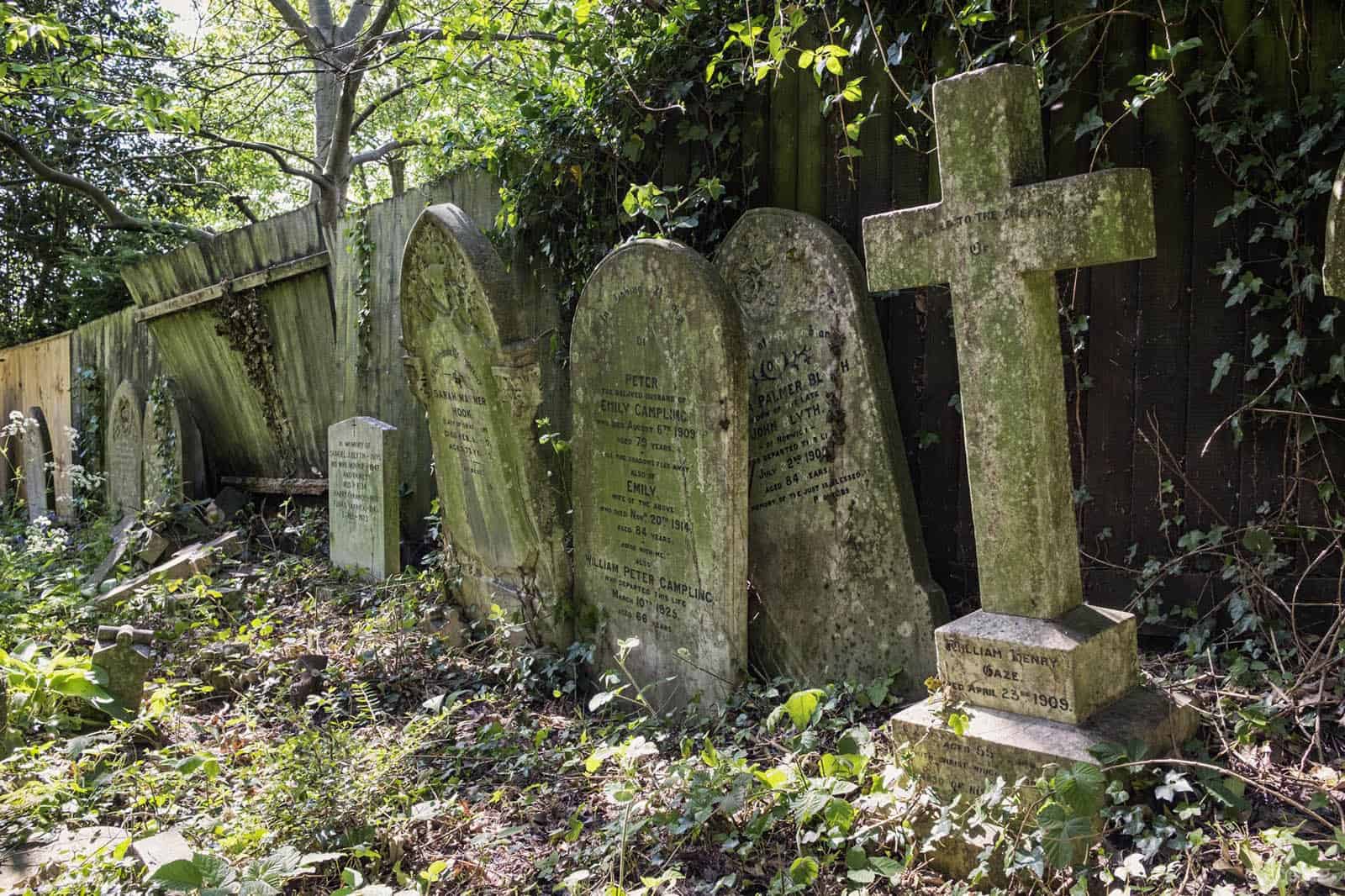 The Rosary, a piece of land in Thorpe, formerly market garden covering several acres was an ideal plot to plant the bad-boys and bad-girls of Britain’s new-ish religions and perhaps a few people with no religion at all. Rev Drummond along with a group of shareholders bought the five acres of land and plotted their future plots. Bishop Henry Bathurst of Norwich registered the burial ground in June 1821. He was a remarkably tolerant figure for the times, the only Whig bishop in the House of Lords described as lax in standards by some because of his attitudes of acceptance. The beauty of this space was any denomination could bring their own ministers and perform a ceremony here. Most early burials regardless of denomination were performed by Drummond, one of the first of which was the reinterment of his wife Ann who had died in childbirth. Previously she had been buried in Colegate at the small meeting house cemetery. The ground slowly filled, speeding up and slowing down with the rhythm of the city, each new last breath an expression of the story of place, full stops in the phrases of life.

The Cemetery Lodge on Rosary Road was designed in Tudor-Gothic style by J. S. Benest in 1860, also responsible for the Drill Hall, now lost in Chapelfield’s roundabout – a shadowy flint curve in the grass and flowerbeds. He also designed the chapel at Earlham, the cemetery for which appears to have been laid out by Ernest Benest, the city surveyor, probably his brother. J. S. Benest also is responsible for the rather grey looming bits of the rebuilt and facing cloisters at Blackfriars on St Andrews, now part of NUA. 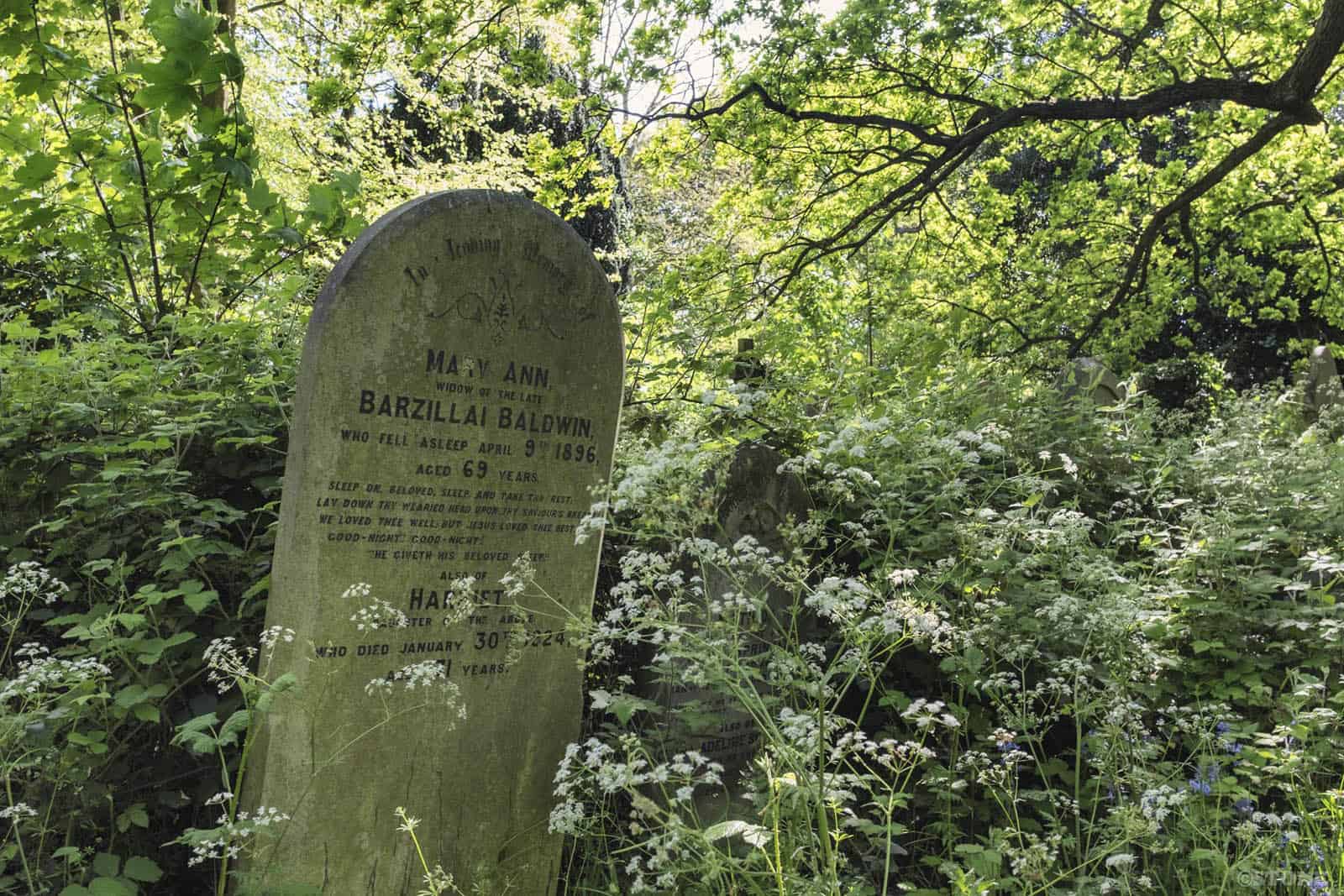 The Mortuary Chapel was added in 1879, a Gothic-styled treat designed by Edward Boardman. It sometimes feels like Boardman made half of Norwich; The Royal Hotel, the United Reform Church, Chapelfield Road Methodist Chapel, and the former Norfolk and Norwich Hospital to name a few of his grander designs, he became Mayor in 1905. He is as you’d probably expect buried here too, his memorial a large sure-footed obelisk striking upward through the tall wild grasses. The Cemetery was extended in 1924 and 1932, some of it was sold off in 1964. This was completed by Captain Sandys-Winsch, another Norwich name, originally from Knutsford; he was a soldier and pilot during the Great War and made his name as a landscaper for Norwich City Council responsible foremost for Eaton Park, but also Heigham, Waterloo, and Wensum Parks as well as planting a lot of the trees we now see forming the canopy in our city.

There are too many of the Great and the good to mention planted here dispersing their nitrates into the trees, bluebells, and cow parsley, but it’s worth naming a few: Some of the Colman’s Mustard family are here, surgeon Emanuel Cooper whose family are said to have inspired Galsworthy’s novel The Forsyte Saga, Jeremiah Cozens with is vast tomb, John Barker, Steam circus proprietor, John Alexander, minister at Princes Street chapel, Jeremiah James Colman the industrialist, philanthropist and politician, Richard Gurney the banker (many Gurneys are buried at the Quaker Burial Ground), James Sillett, Painter of the Norwich school along with fellow artists  James Stark, John Thirtle, and John Berney Ladbrooke. Frederick Ringer a businessman known as the ‘King of Nagasaki’ now lies almost lost in a carpet of flowers. Jacob Henry Tillett the founder of the Norfolk News, Robert Webster, first Chairman of Norwich City Football Club and George White the shoe manufacturer and Liberal MP. There’s the Hines family engineers with a metal memorial under the trees. And George Wilde a survivor of the Charge of the Light Brigade. Notably also the graves of Driver John Prior and fireman James Light, who died in the 1874 Thorpe rail accident; a head on collision between two trains, the two men lie side by side.

Perhaps my favourite is Ralph Hale Mottram mostly famed for writing The Spanish Farm Trilogy. This lays amongst a huge number of other books, pamphlets and poems. He was a bank Clerk who eventually became Mayor, while not really a rags to riches story, he was a man of great intellect who was absorbed by the city, which ultimately him. Mottram was also the last Chair of the Trust that ran the cemetery. His grave is simple, perhaps mirroring his non-conformist background. He was also a fan of the place and is alleged to have once said I knew, when I was four years old, exactly where I could be buried. 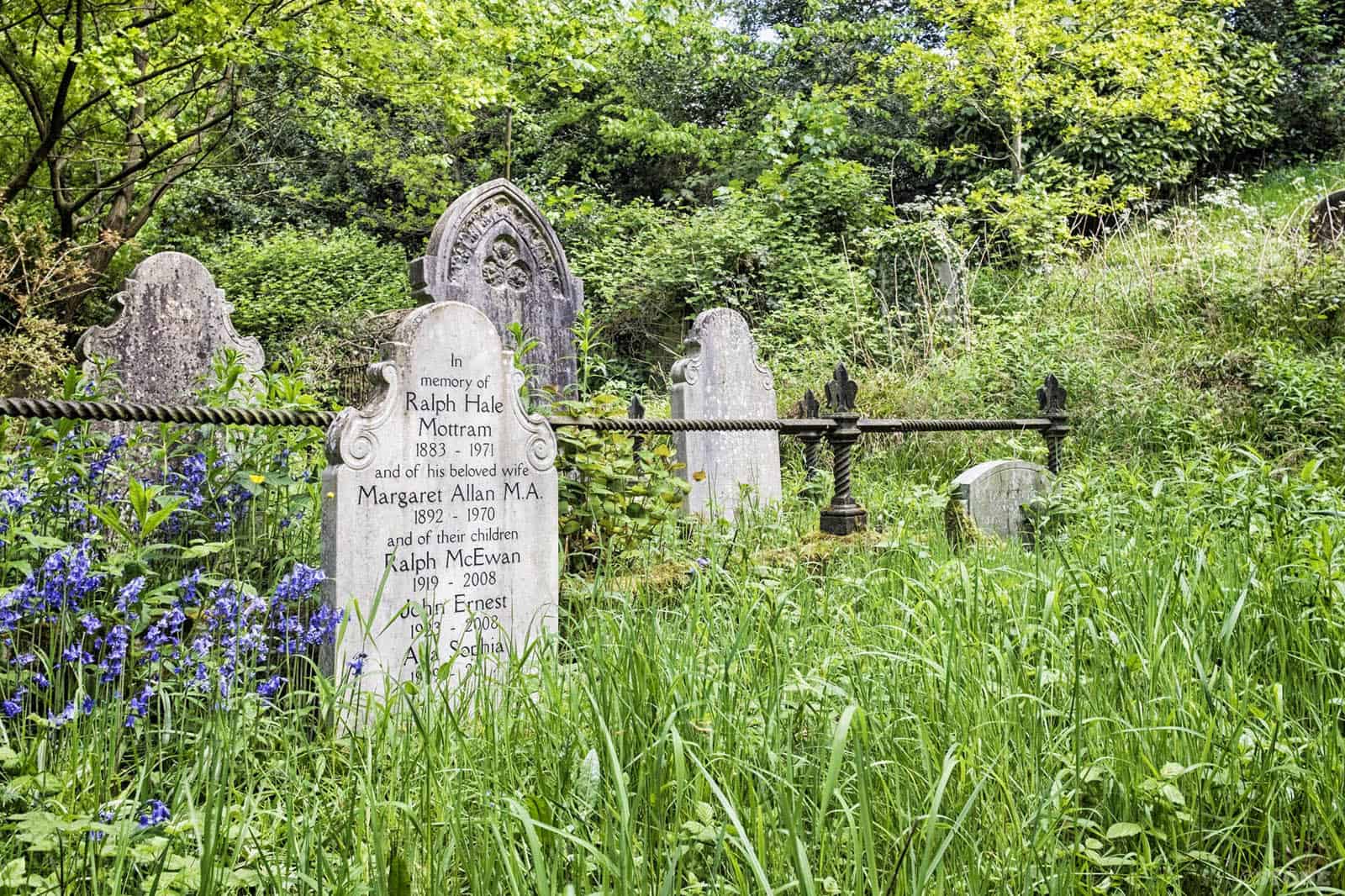 And what of the ordinary? It always strikes me that there is no such thing. Each name hides a story, it is merely a case of how known we all are. Alderman and industrialists jostle with butchers, bakers, and probably a candlestick maker or two, anchors attest to sailors, there are the stilled fingers of seamstresses and weavers. And then there are the names from Norfolk, ones I know from my own life, the people that inhabit our memory that still serve in shops, Armes, Cushions and Dyes, Burrels, Camplings, Gurneys and Baldwins, Hooks, Martineaus and Blyths. There are thousands of the everyday here spanning over 200 years, all of these chapters in a continuing flow of stories written and sealed up, their names inscribed with love on the stone covers. 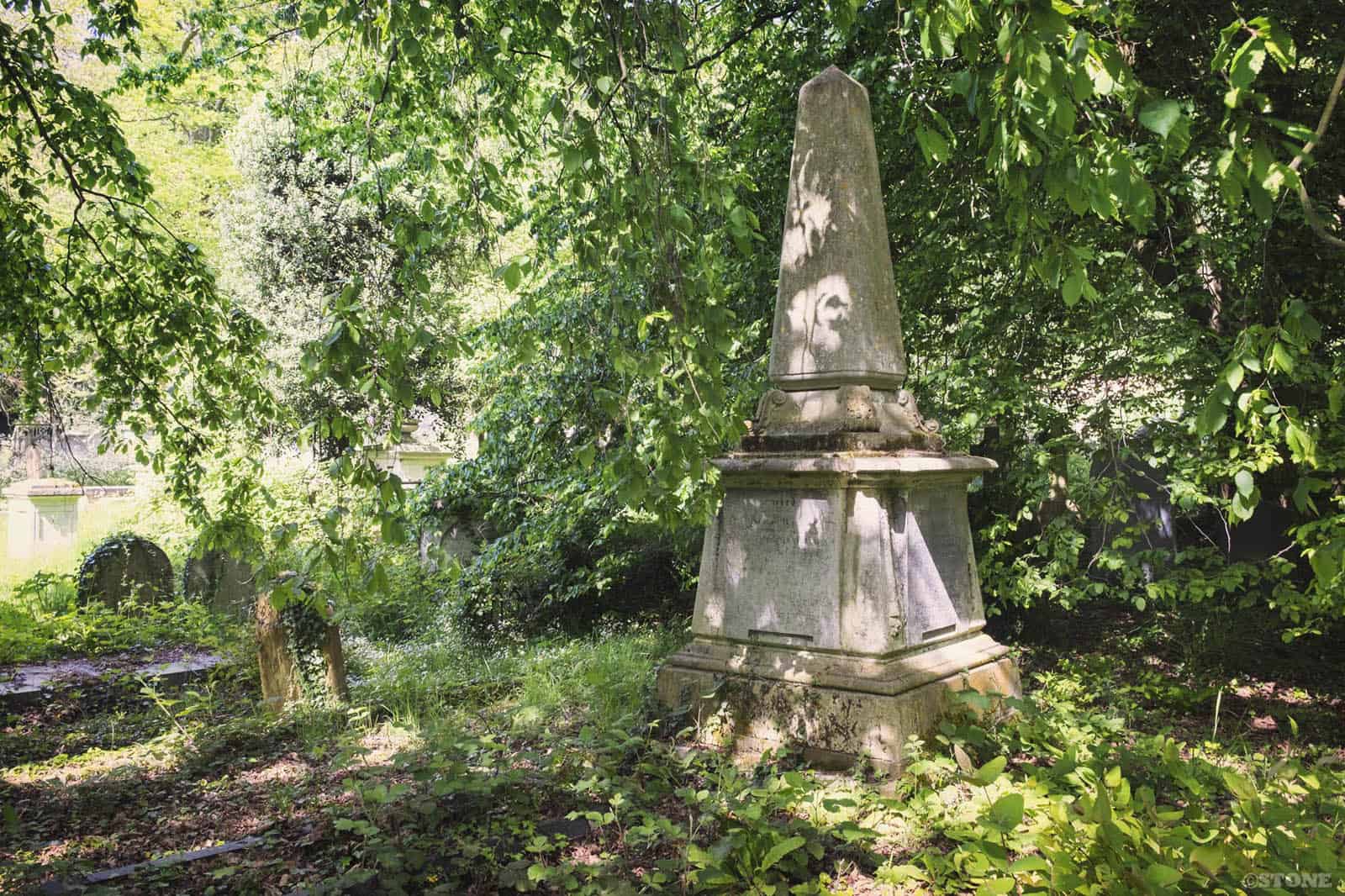 We brushed our way through the higgeldy-piggeldy overbite of the gravestones and the profusion of spring green, down and through the wilder stepped and weaving parts of the original cemetery. Then wandered through into the more modern extension. Here it is in some way calmer and not at the same time; the grass is trimmed, there are bunches of flowers and teddy bears, dream-catchers and notes hang in trees. The letters aren’t slewing off in thin sheets of sun and frost fractured limestone, the gold and lead lettering still sticks in the granite. Amongst the dearest grans, loving aunts and mothers, daughters, much loved dads, nephews and sons; the carved letters are still new enough to feel the ache of the living – recent and beyond the exercise in genealogy and the skittering of a pen or pixel down to the roots of a family tree. Here people kneel, tending graves where the lichen and moss hasn’t yet faded the emotions, edges are clipped, marble polished and scrubbed.

There is one local lad we always go and see, his name is Marcus. I don’t think I ever knew him in life, yet I recognise something in him. We are united in our past similarity, the irony of our hard fought individuality at a formative age. He is marked with a curious clan symbol, the Crass logo sits at the centre of his black marble marker, the twin headed snake of the establishment eating itself inside a circle over a cross on his marker. The word Crass carved below, a circle on the A. In the 1980s it was a tribe I too felt I belonged to. And there, most poignant of all, in that slightly new European way, a photo of him, perpetually aged 17, his hair crimped and spiked. And across time for an instant as I stare at him I can almost sense the ranks of dissenters nodding a blessing of approval at yet another way of thinking. 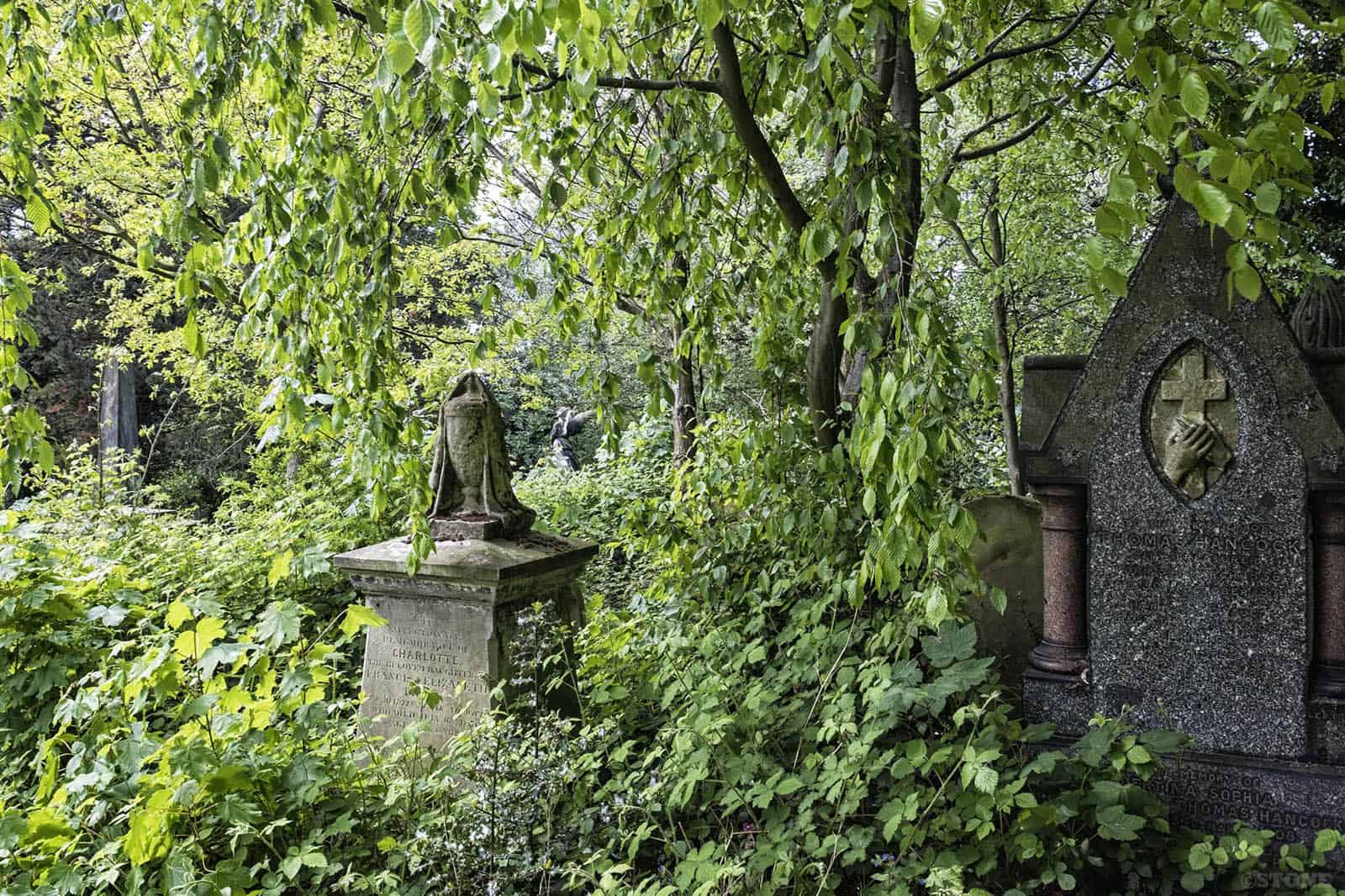 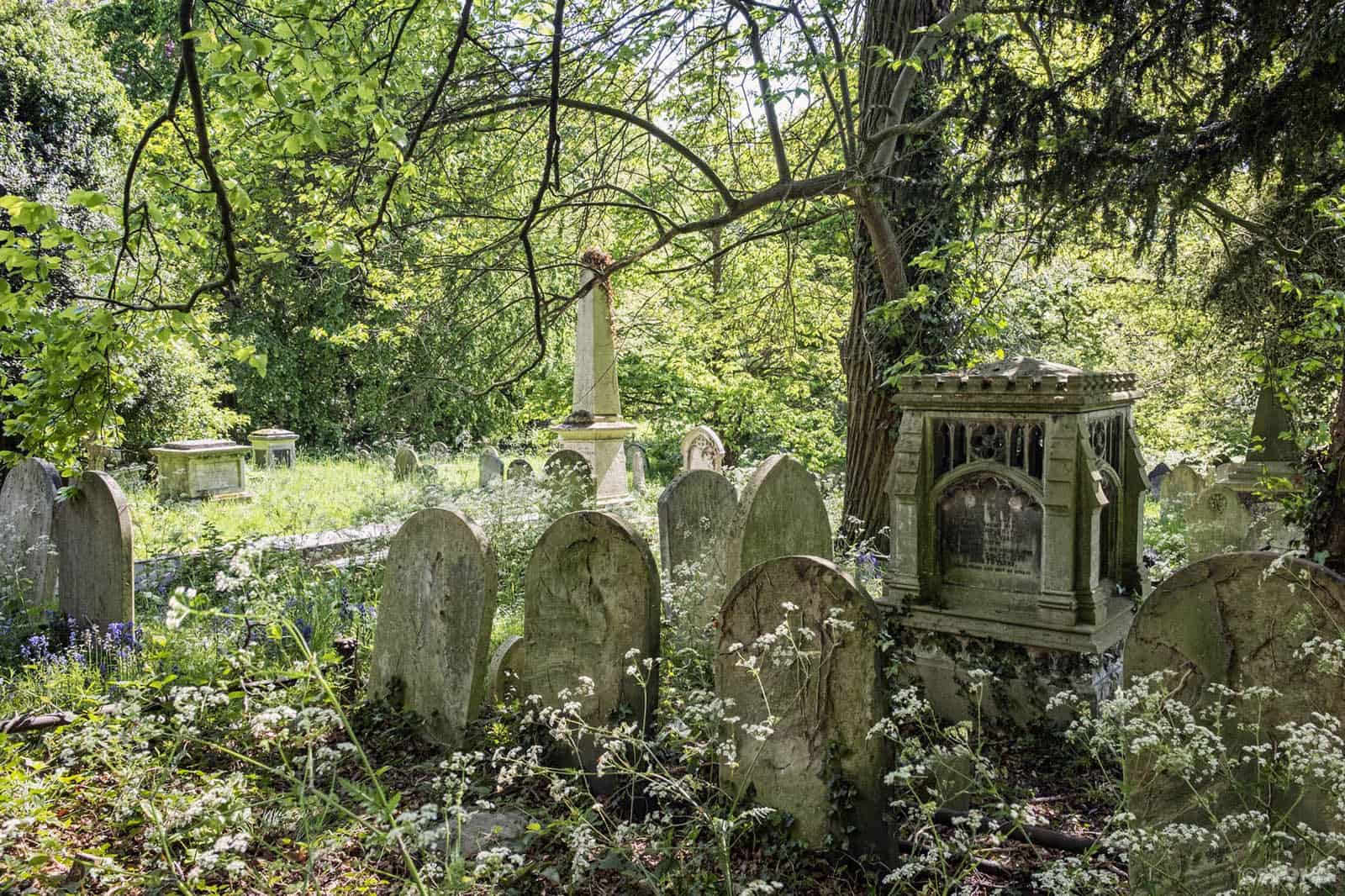 Ozymandias
I met a traveller from an antique land,
Who said—“Two vast and trunkless legs of stone
Stand in the desert. . . . Near them, on the sand,
Half sunk a shattered visage lies, whose frown,
And wrinkled lip, and sneer of cold command,
Tell that its sculptor well those passions read
Which yet survive, stamped on these lifeless things,
The hand that mocked them, and the heart that fed;
And on the pedestal, these words appear:
My name is Ozymandias, King of Kings;
Look on my Works, ye Mighty, and despair!
Nothing beside remains. Round the decay
Of that colossal Wreck, boundless and bare
The lone and level sands stretch far away.”

Big A Little A.