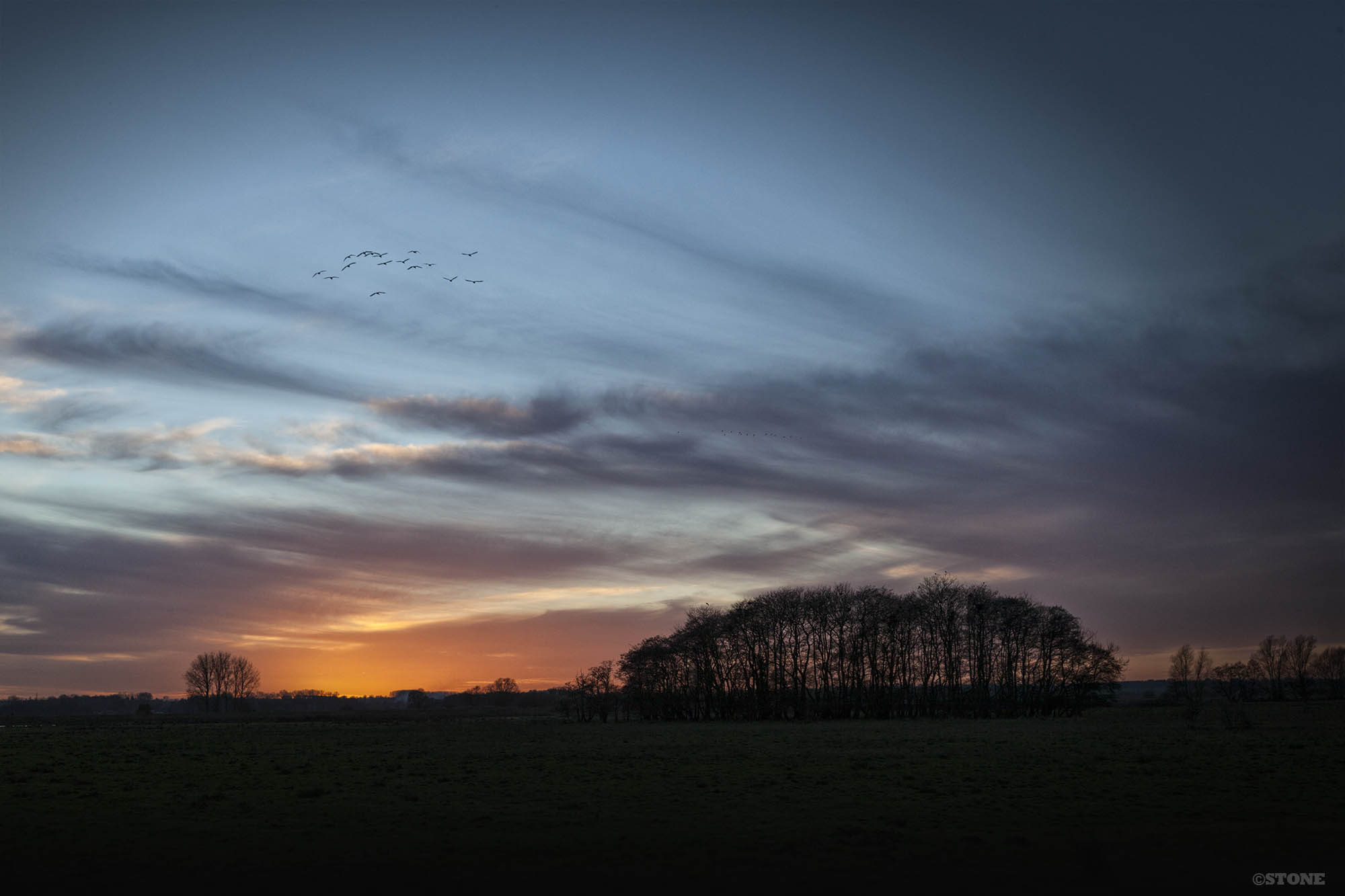 Heading west of the city two days before Christmas, and it’s all a bit of a bind. A glue of cars sticks the inner ring-road fast, the whole route backed up with shoppers, escapees, people leaving work early, the driving dead. The light is at a tangent – the winter movement of the sun keeping it low over the walls all day. And now, as it starts its final low arc before disappearing behind the saw-tooth roofs the traffic doesn’t quell, the slanted light thrown up and back off every surface, reflected in mirrors behind you, smeared by condensation in the corners of windows, crazed by brake lights, the golden hour.

I think I might have blown my timing, stuck on Riverside Road in a queue as the light intensifies before it finally dims – the ball of the sun filming behind light cloud near the horizon. I glance at the steady roll of the miles and minutes on the digital display on the dash as I hit the metal twist-puzzle at Postwick, the cars sit on lines at every junction, birds on wires waiting to go. The A47 is clear, sundown is at 3.45, I have twenty minutes to get to Buckenham Carr, Brundall is slow, all the roads governed by the minutes speeds of residential areas.

The roads out towards Strumpshaw Fen, Buckenham and Cantley are empty, first Stone Road then another side road; Station Road. The octagonal thirteenth century tower of St Nicholas’ church comes into view, it is a rare survival as waypoints go. Now redundant, previously, the focus for the Beauchamp* family in the area, a curiosity on the edge just before the land falls away. Station Road slopes lazily in a curving drive down from the valley side onto the edge of the flood plain and the Yare marsh. The road drifts past the treeline that forms the riverward of Buckenham Carrs, lining a field down towards the Old Norwich and Yarmouth Line and the Station. On the slow descent, a pair of Holme oaks sit, a wartime brick-built observation post grown out of the middle guarding the small road where rail and river meet. The station sits here still, a unmanned crossing balanced on one edge of the marsh with the levee of the River Yare at the other. It is still working, once the first publicly owned stretch of line in Norfolk, trains rumble on past the steaming tower of Cantley to Great Yarmouth and back again.

The car park behind the station is the point where the human side of this equation forms up – there are four cars here, all already empty, tracks of water drops on the windows on the smudges of grey heat laid condensation. The only signs of life are lights on in the station; a TV screen plays out a silent cartoon to an empty room, At the house opposite cold white LED fairy lights drape a bush like a bad spell against the warmth of tungsten from inside. There are no people in sight anywhere.

The marshes are somewhere we have used for centuries, even millenia. There are at least four places called Buckenham in Norfolk; Two near Attleborough and one Buckenham Tofts lost in the Stanford Training Area. The name ending is fairly resolutely Anglo-Saxon, or in this instance Anglian, a word perhaps bought here from Angela in Frisia on the Danish Peninsula by someone called Bucca; maybe it was a popular name, common enough for a slew of them across the county, or maybe there is another meaning we’ve lost. Whoever it belonged to their homestead was here, a linguistic blanket thrown over any previous place name by it. The Danes came after and added Carr (kjarr) a word defined by the landscape of this woody marsh.

Before them the people whose placenames are lost remain, they lie in the grass higher on the edge of the valley in a line of faded and plough-lost Bronze Age barrows near South Burlingham. There are hints of Romans here too, signs of their enclosures dot the higher ground, the edges of the flood plain’s importance obvious right back onto the the heights of Ber Street and down to the forts at the coast. A feeding ground for birds and humans alike. Down here, just up from the edge of the flat marsh looking away from the sun, as it gradually extinguishes behind the creamy ribbon of the Yare, are the remnants of Medieval peat cuttings. In the trees the almost lost Buckenham and Hassingham Broads hide. And on the margin a train ticks along towards Yarmouth, peopled, lit from within. 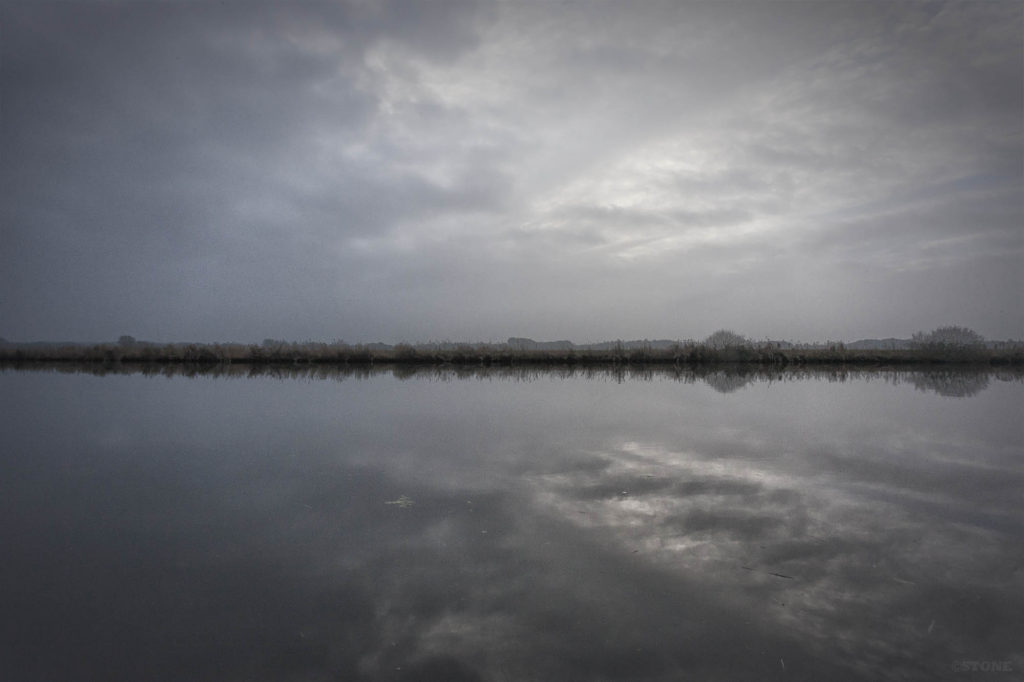 Across the line down on the path there is still no one. The cup of the sky is starting to roll over, one side filling with darkness, the other still lit augmented by high cloud in refracted cream and orange above the purple-blue still of the icing waters and grasses. Photos speak of silence but the noise is quite intense. Geese are coming in for the night, they wheel in onto the grass and water between the dykes undercarriages down. A marsh harrier behind me bothers some late feeders who buzz and swarm before settling again lost in the tussocks. The place is alive with noise.

Then here and there you suddenly spot the first few arrivals of what I came here to see, or rather sense them as the light dims. The Corvids – Rooks and Jackdaws. There is a copse, beech I think, it sits in the marsh just before the bird hides and the river. Concentric rings of trees, dropped seed from a single entity domed and spreading over time. This time of year it is just sleeping fingers reaching upward. It reminds me of  Paul Nash’s Wood on the Downs. But this is far from downland, perhaps it’s just the shape, that familiar bubble of trees found so often across fields in the flat of Broadland Norfolk 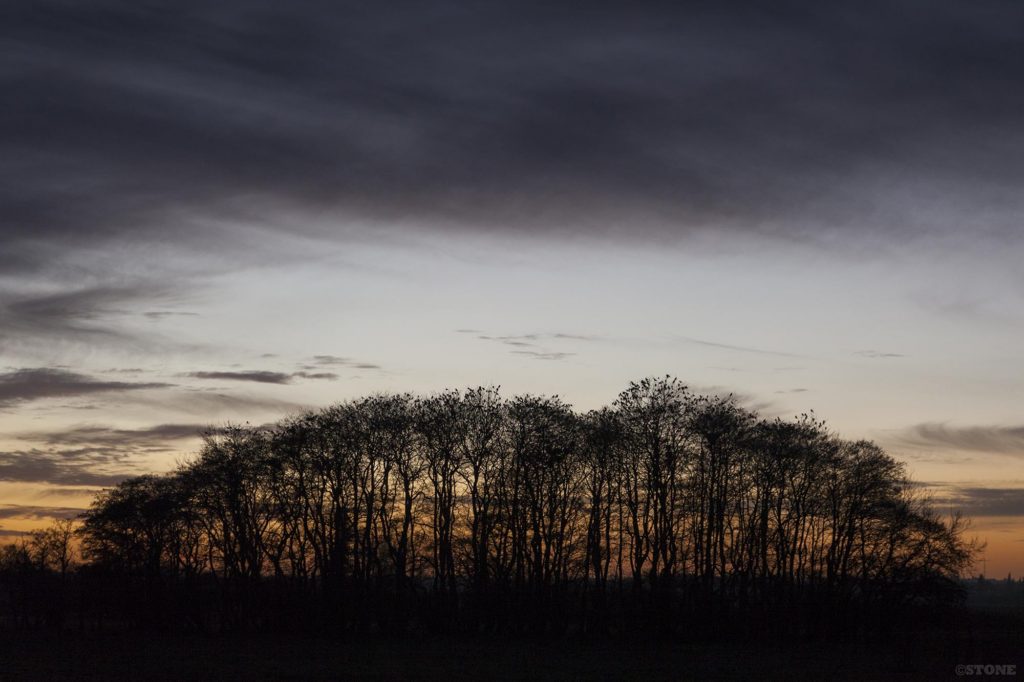 A few birds already sit like fruit in the top branches. I’m frozen like the air, they come dipping in, old blown rags twisting and dropping into the top of the trees. The lines of birds thicken; like a black clad crowd turning up at a venue, the slow queuing; first dribs and drabs then a trickle then gradually and finally suddenly black streams. Each new section completing this now familiar zig-zag and drop jig, the earliest reposition to make way. Away across the field I can hear, then see more, settling like black dust, they settle in the treeline further down, strut the field. What starts as a trickle from the west turns into a flow, a haze of birds in the dimming light settling, making the wires heavy, filling the spindly tree-tops with dark preening and cawing fruit, the noise gradually building into something almost Hitchcockian. It is around you, has no defined centre anymore, birds seem to come from every direction; punks tangling in with the commuter-like arrival of more stately geese.

Finally a strange near silence falls over the trees as the last light ebbs away, just the background cartoon sounds of the geese settling in the near silence. I’ve been concentrating so hard on the whole thing I’ve forgotten I’ve got a camera, stopped upping settings to counter the massing darkness. It’s too dark to deal with properly, my eyes are making their own sensor noise now. I can make out the preening and manoeuvring turning to a readiness in the cold air. Suddenly they still, then shuffle and then the whole of the copse starts to take flight. I can barely see it, it’s almost more of a feeling, a sense of living movement, streams of them lifting up from every treeline all heading into the ancient Kjarr between the church tower and the broads where they will roost – A black gang rushing headlong into the darkness in front of the stage.

The noise returns, with my back to the two oaks I sense as much as I can see the swirling mass above the final resting points, tens of thousands of birds, dipping, turning and dropping, a flickering sense of revelation in the dark, themselves like a shoal of fish as they turn wing-side on then vanishing again into black dots in the blur. Tens of thousands vie for the best places; the safest, warmest most secure spots.

I’m suddenly struck by the tape head of time moving. These birds have probably been converging on this spot for as long as man has stood here and watched and they’ve eyed man back; me, the birders, the Home Guard in the OP, the station master, wherrymen, wildfowlers, peat cutters, The traders and settlers on the ridge. It continues to be watched, as old as the landscape. 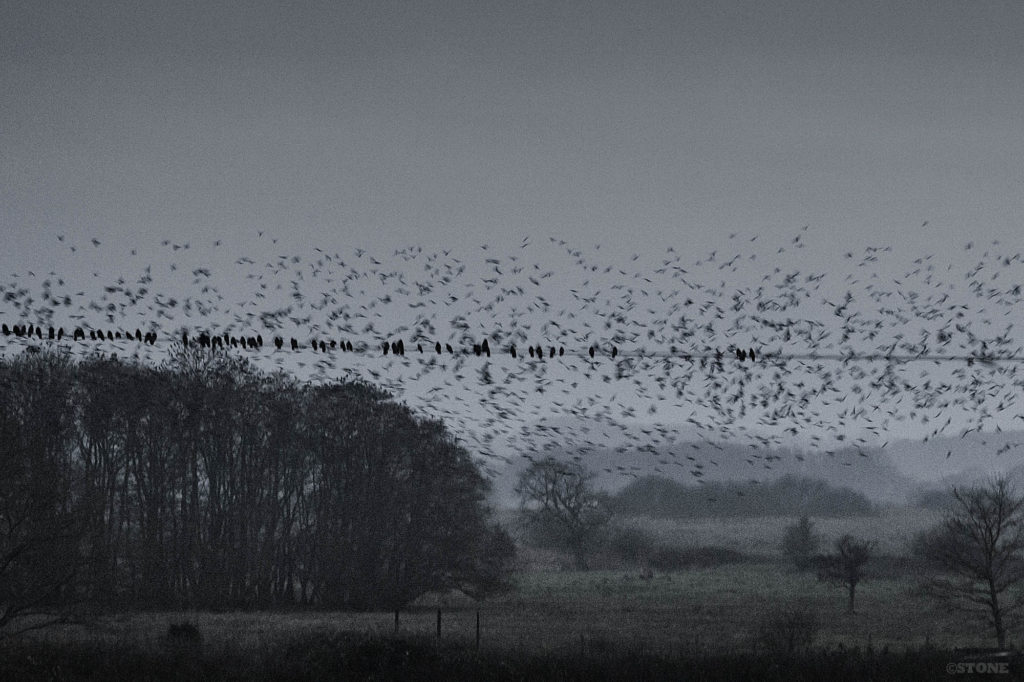 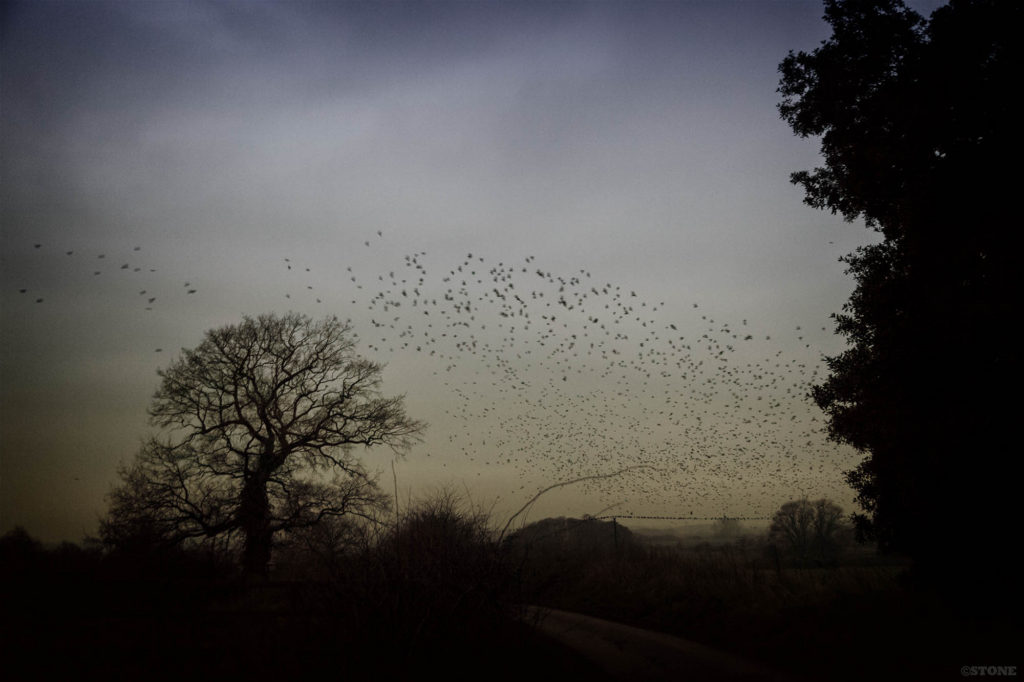 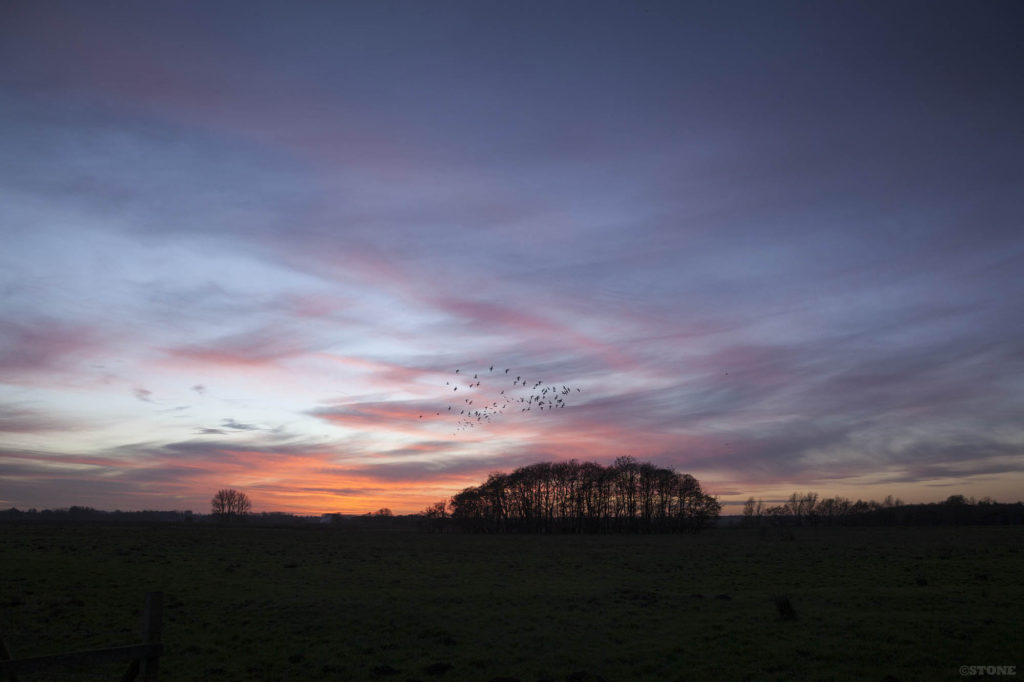 Read better stuff about it here from Mark Cocker.