The Brooding soldier sits on a corner at Sint Juliaan, or St Julian, or Vancouver Corner, take your pick from Flemish, English or Canadian. It is just to the North East of Ypres or Ieper on the way to Langemark/Poellcappelle not far from Passchendaele, but most sites here aren’t far from other names in the lexicon and Toponymy of the Ypres Salient. It is primarily a Canadian memorial. I can remember being quite surprised the first time I came across it on a rainy miserable day in the mid-1990s. You sort of expect these things to be somewhere that’s special, it isn’t. It’s set back off a small staggered crossroads just the other side of Sint Juliaan next to a small coach and car park surrounded by conifers, a bar advertising Jupiler opposite, Tractors and trailers, the drivers with draped fags trundle past. but through the trees this tall finger of white extends upwards turning into the head and shoulders of a soldier with reversed arms, a symbol of sadness shielded by trees, somehow nearly lost in the miles and miles of arable land and the maze of small roads that crisscross this landscape. Struggles don’t necessarily account for prime position or place, and memorials often mark the ebb and flow on side roads, up tracks. The Memorial was designed by Frederick Chapman Clemesha, this was second in a competition to be memorial on Vimy Ridge, I prefer it. This one for me is particularly poignant. It commemorates part of the Battle of Gravenstafel; The second Battle of Ypres, on the 22nd April 1915 – the first poison gas attack using chlorine on the Western Front took place along this line. 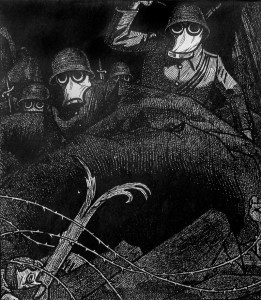 The Germans command ordered the release of 168 tonnes of gas. Panic spread as rapidly as the choking cloud did, 6,000 French, Algerian and Moroccan Colonial troops lost within ten minutes, the remainder rose from the gas filled trenches – the chlorine being heavier than air had sunk to fill the hollows where the men hid. They were mown down by heavy machine gun fire, the remainder fled. Many were blinded or suffering from dreadful lung damage, chlorine turns to acid on contact with water and oxygen, it literally burns out the soft tissue, men drown in it. The Germans were not too keen to advance into this special poisonous piece of hell and didn’t have the reserves to fill the hole, they’d not expected this level of “success” and didn’t exploit it quickly enough. British and Canadian troops put up a hasty defence and plugged the gap. The gas bleached what remaining grass and leaves there were, along with the uniforms of the dead and wounded. The only gas protection at the time was to piss on a rag and tie it across your face, this didn’t really work but was better than nothing at all. Over the next 3 weeks 6,000 British and Canadian men were wounded or killed in this area. 2,000 are buried on this spot at the St Juliaan Crossroads.

Fred Northrop was my nan Jesse’s favourite brother, my great-uncle, according to my older brothers, he was a nice, quiet man, they remember him visiting nan with another relative Frank who was ‘a bit slow’ according to my mum. Fred used to look after him, he had some kind of head injury and was disabled. Fred himself was a long term asthma sufferer.

Like most of my family, he was good solid working class stock. The Northrop clan have lived in Cambridge since 1500, never really advancing much beyond labourers and railwaymen until the 20th century, they lived in the terraces and cottages in the middle of Cambridge or in the back-to-backs on Hills Road. Fred washed Sausage skins for a living. On the 7th August 1914, aged 23 Private 2173 Frederick George Northrop signed up for the 1/1 Cambs, He embarked to France on 14th February 1915. He lasted 4 months.

Here’s a bit from from my friend Steve about Fred’s Battalion from his research and The War Diary:

Fred would have seen action at the Battle of Mont St Eloi in March 1915 and the 1/1 Cambs had a terrible time of it at 2nd Ypres and were in Sanctuary Wood when it started. On the 7th May the battalion lost 1 officer and 31 other ranks wounded in artillery bombardments and on the 8th May the Germans attacked the area held by the 27th and 28th Divisions. They specifically centred on the 28th Division initially, but on the 9th May they hit the 27th Division. Their main attack was around Hooge and the shelling continued with gas also being used. ‘Situation still pretty critical-shell fire very heavy officers patrol again out and about put out Plus crossing the Menin Road to deal with any small parties of the enemy.’ – From the 1/1 Cambs war diary for the 9th May 1915.

On the 10th Algeo reports: “Artillery fire still heavy but infantry attacks less determined. R J Tebbutt wounded whilst on officer’s patrol. ‘D’ Company in 2 and 3 trenches heavily shelled, dug outs and bits of trenches blown in.” The first respirators were issued, little pads to wear over the mouth and nose.’

From page 24 of The Cambridgeshires 1914 to 1919 by Brigadier General E Riddell.
The 1/1 Cambs continued to move between being in the reserve around Ypres and in the front and support lines between Hooge and Sanctuary Wood. The Germans continued to press home attacks and on the 24th May the 1/1 Cambs had to standby with the rest of their brigade when on the 24th of May the Germans released a gas attack on a 4.5 mile front which forced the British back to a point where the Salient was only three miles in depth.

He was discharged from the army through sickness on 11th June 1915. He had been gassed. 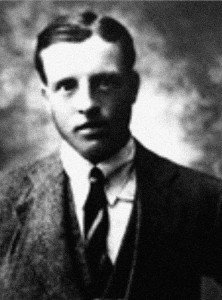 We can’t really tell how it affected him, how long his recovery was, but he never went back to the front. The research has in turn jogged both my much older brothers’ memory, they remembered my Nan Jesse telling them as a child that Fred was gassed. Fred who was quiet and kind and had a slight stoop as if his chest troubled him. He died in 1976 when I was about 10, that age where although I knew about my lost Grandfather and had an interest in the Great War it extended little beyond a list of places and some medals and a Dead Man’s Penny in a sweet tin, throwing mud-clod grenades at each other from drainage ditches and footings on a building site; ‘The Somme’; that became the Lynfield Estate in North Walsham. Sadly I never met him, as with most families these days it’s easy to slip away, people move, lose touch. His sister; Jesse, and Alf Ireton her second husband, another wounded ex-soldier and forester from Hitchin, both died before I was born, so there really is nobody I know to ask.

So Sint Juliaan, although I didn’t realise it on that rainy day in the mid 1990s, when the shaft first hove in to view through the gloom, means so much more than I thought, because although it will always stand to represent the men that died in the field over those days, it also for me represents someone that survived to wade out of the green sea, have a family and live a full life and somewhere in my extended family they have his payment – his medals in a drawer.