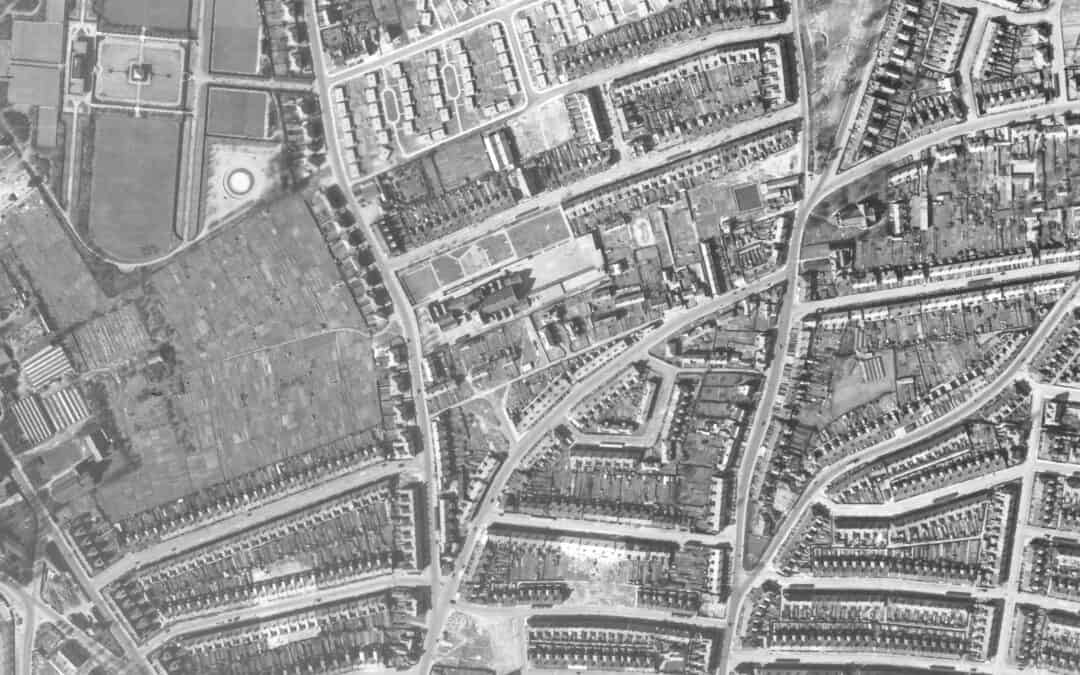 The Norwich bomb map was originally created by Norwich Air Raid Precautions Department to record all known bombs* dropped on Norwich between 1940 and 1945, including the extensive Baedeker Raids of 1942, giving the location, date of the raid and the type of ordinance dropped where known, this formed part of the information collected by the government as part of the National Bomb Census. The map was previously housed at City Hall in the Engineers Department – in 2007 it was moved to Norfolk Record Office to protect and conserve it.

The map is composed of 3 ordinance survey maps mounted on 6ft sheet of chipboard. Each bomb is marked with a metal pin and a cardboard tag. The condition of the map was poor; over the previous 70 plus years it had deteriorated badly – smoke from cigarettes, pollution in the atmosphere and gases released by the chipboard had discoloured the paper heavily, the pins had rusted, ad the labels had curled.

In 2014 the process of conserving this piece of history began, Yuki Uchida from Norfolk Record Office spent 5 months conserving the map. The labels were catalogued, washed in de-ionised water to remove chemical and prevent further deterioration, the map was cleaned and all the materials stablilised. The 679 labels were straightened out and returned to their original positions – a large complex task. At the end of the conservation process a scanned version of the map was made available at Norfolk Record Office to view and to buy on CD allowing public access to the information for the first time.

In 2016 some friends and I decided it would be a good idea to digitise this information, we approached Gary Tuson at Norfolk Record Office and asked permission to do so which was willingly granted, Jess MacDonald, Richard Jeffery and I then set about making this happen with a view to having it ready for for the 75th anniversary of the first Baedeker Raid of 1942. We missed the deadline, so we’ve hung on. It is the 80th anniversary on Wednesday the 27th of April 2022, it seems fitting now to release this.

The plan is to eventually add photographs to as many locations as possible from my accumulated archives, I have hundreds of images, this is a lengthy task, so please bear with me. Should anyone have any family pictures of bomb damage which may extend this, please get in touch via email. Scans are always welcome.

What we have done is catalogue the bombs by weight, you will also notice you can sometimes see the bombing patterns, so the direction of travel is visible through the impacts by date. The intention is to give local residents more of an idea of exactly what happened in their area during both the Baedeker Blitz and the other raids which took place during Second World War.

You can also view this map direct in Google Maps here.

Feature image at the top of the page is a section of a the April 1947 aerial photograph of Norwich, showing bomb damage to the section of the city to the south-east of Waterloo Park. The bottom right corner just touches Wensum Park, you can see damage to the top of St Martins Road, Patteson and Buxton Road, as well as areas of damage to Jolly Gardeners Court. Air raid shelters and slit trenches are also still visible in Sewell Park. (Photograph: Author’s personal collection).

With thanks to Jess, Richard, Gary and all at Norfolk Record Office.

Below is a low res copy of the bomb map. You can purchase this in hi-resolution on CD here.

In response to comments in a few emails regarding question about gaps in the map. The map isn’t a complete picture of all the bombs that fell. It is a record of ‘recorded incidents’. We are also aware of other spots where things clearly happened but went unrecorded, or in some instances where pins may have gone missing. As stated the map sat in the city engineer’s office for 70 years and I’ve previously heard stories of pins falling out already from some sources.

It would perhaps be interesting to compare it to some often other bomb maps, there’s at least one other independent one, and there’s also Wally’s Map in the Museum of Norwich at the Bridewell which may have other sites listed.

Elements we know are missing include a number of unexploded devices, particularly the bombs retrieved from the rear of a house in Anchor Quay, Coslany, a 250kg that was retrieved from Waterloo Park, and one in Theatre Street.

Also St Paul’s Church and St Michael at Thorn as commented on by Sue Law below, which hadn’t occurred to me. If anyone spots anymore please let me know by email.

I have also had a conversation with Richard Lamb via email about a bomb known to have been dropped on Collins Court and Angel Road which isn’t marked, we have located using post-war aerials where you can see the chalk marking from the infil.

It is also worth noting that later Baedeker Raid in May and June were in some instances partially mitigated by diverted them away from the city and out over Poringland and Stoke Holy Cross Starfish site, none of these are indicated on this map, but may be added later as a separate layer – whilst I don’t have them pinpointed in the way the Bomb Map allows, I do have a rather Heath Robinson list of known locations as well as many of the raids across Norfolk, including the V2 impact sites. So keep an an eye on this for updates.

All of the content on this site is free to view, if you would like to support further work and running costs for the Invisible Works site or any of the other projects I run, or just keep me pepped up with caffeine you can chip in a few quid via Ko-fi here. Always very much appreciated.