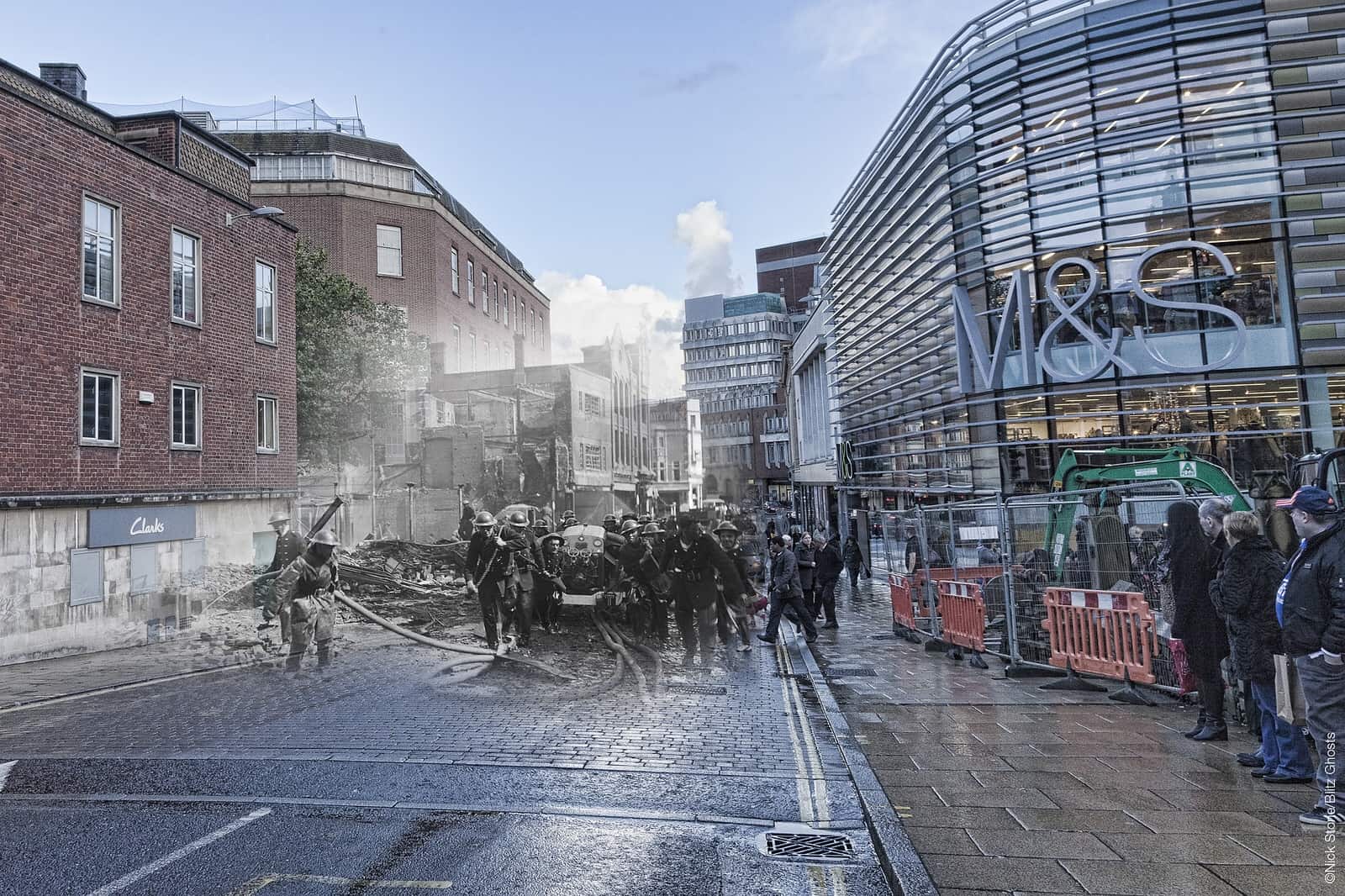 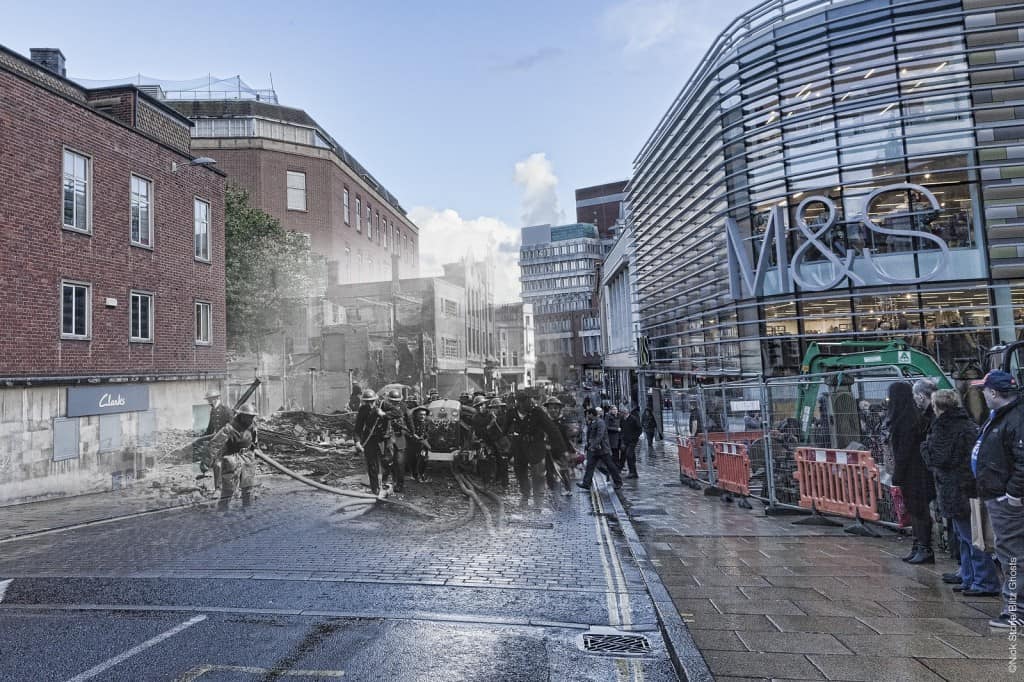 Seventy years on, plus a bit. The result of the second night of the main two raids 29th/30th April 1942, The fires are out, must be the modern rain. This is the scene that did for the Caleys factory the previous night, less so than Nestlé did years later admittedly. The flames jumped from Woolworths (Curls/Debenhams) which was hit by HE and incendiaries, and spread to the lower floors of Buntings (Marks & Sparks), it then spread again to the factory, imagine that smell of chocolate like in the 1980s and 1990s, Only magnified and a bit burnt. Rumour has it that a lot of chocolate and molten sugar ended up in the cellars that night. The factory had to be largely rebuilt. From Orford Yard to Brigg Street was burnt out and had to be demolished, the site was cleared and the cellars used as water storage for any further air raids, which did happen but we’re nowhere near as severe. The main site is now Debenhams, which was built over a larger footprint filling in the redundant Tram turn at the end of White Lion Street and Orford Yard, which explains why the remarkable frontage of the building down there which predates the war is visually blocked by the new building, a pity as its a cracker.

Back to Rampant Horse Street, they’ve got slightly further up the hill. I’d guess about how long it took George Swain (if this is one of his) to advance his camera by one frame, and for me to walk forwards towards them a bit, it’s funny, but the only consistent bit in these photos over 70 years and indeed the bit I’m pinning them together with, is that funny little half a tower on the corner of Westlegate which I’d always assumed was a precarious relic of WW2, but obviously has sat there awkwardly for longer than that. 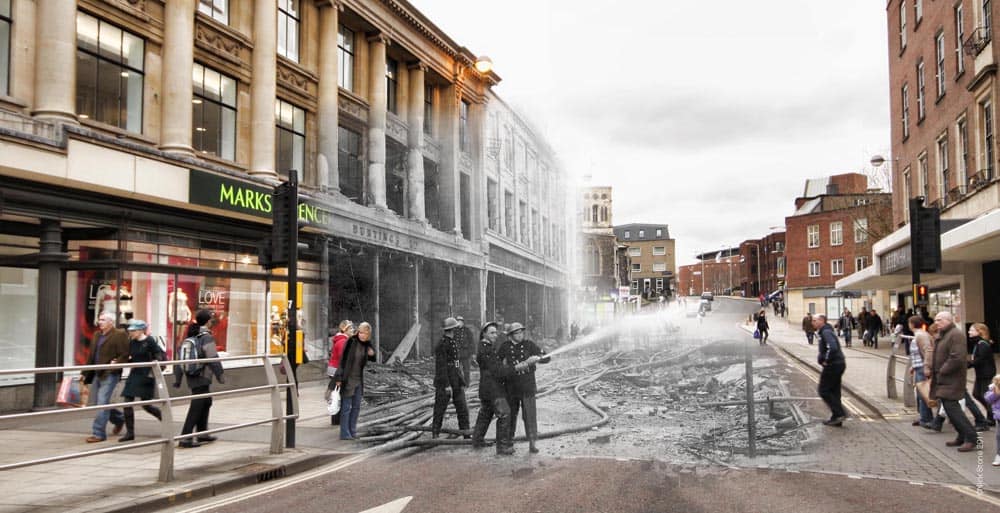 This scene is looking up Rampant a Horse Street towards Brigg Street and Theatre Street, Brigg Street was a mess, smashed brick and glass, the buildings on both sides were demolished. Here the chaps are hosing down the remains of the shops where Debenhamss now stands. 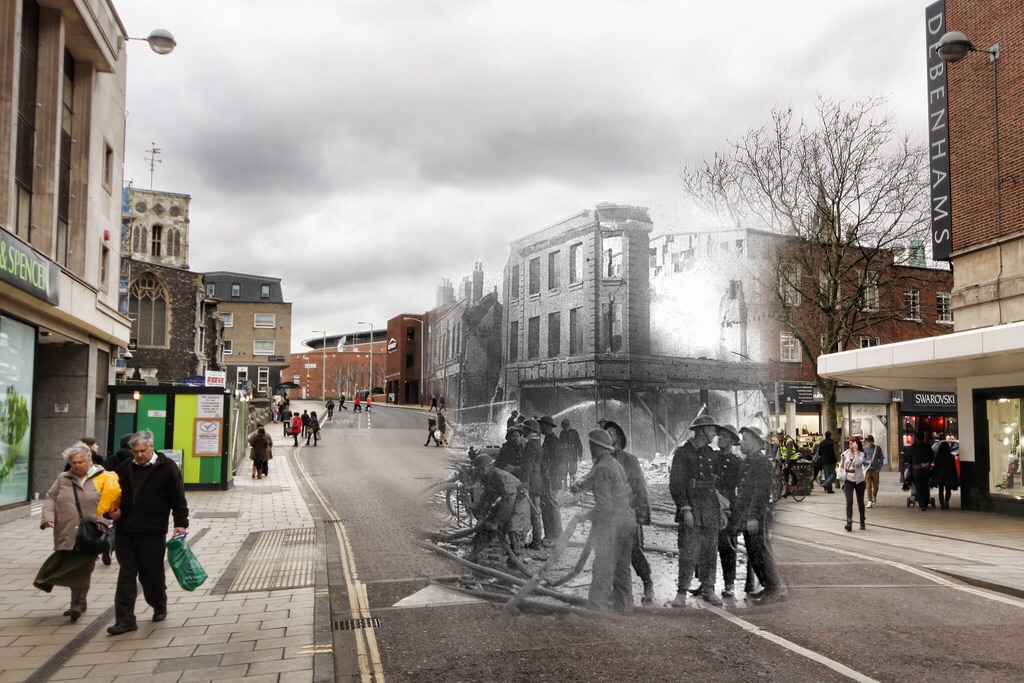 Rampant Horse Street is one of those streets where you kind of wonder how it came by its name, if you look in the doorway to Debenhams roughly level with the stationery firemen with the hose is I believe a remnant, a mosaic of a rampant horse possibly lifted from the previous building, so a possible survival in the modern street. The building was in fact a hotel, or a coaching inn ‘The Ramping Horse’. It seems didn’t have a great reputation at various points in time, that time being quite long as it dated right back to the thirteenth century. It was in fact the place in the eighteenth century that the first regular coaches left for Ipswich and then London and Great Yarmouth. It had quite a reputation, Irish troops billeted to support the Royalist cause in the 1600s got a bit unruly and later in the 1800s cases stacked outside waiting to be taken to London were found to contain corpses robbed from Lakenham cemetery for the lucrative trade in bodies for dissection. it was refused a license in 1892 and demolished shortly afterwards.