Lost in a landscape: Bromholm Priory 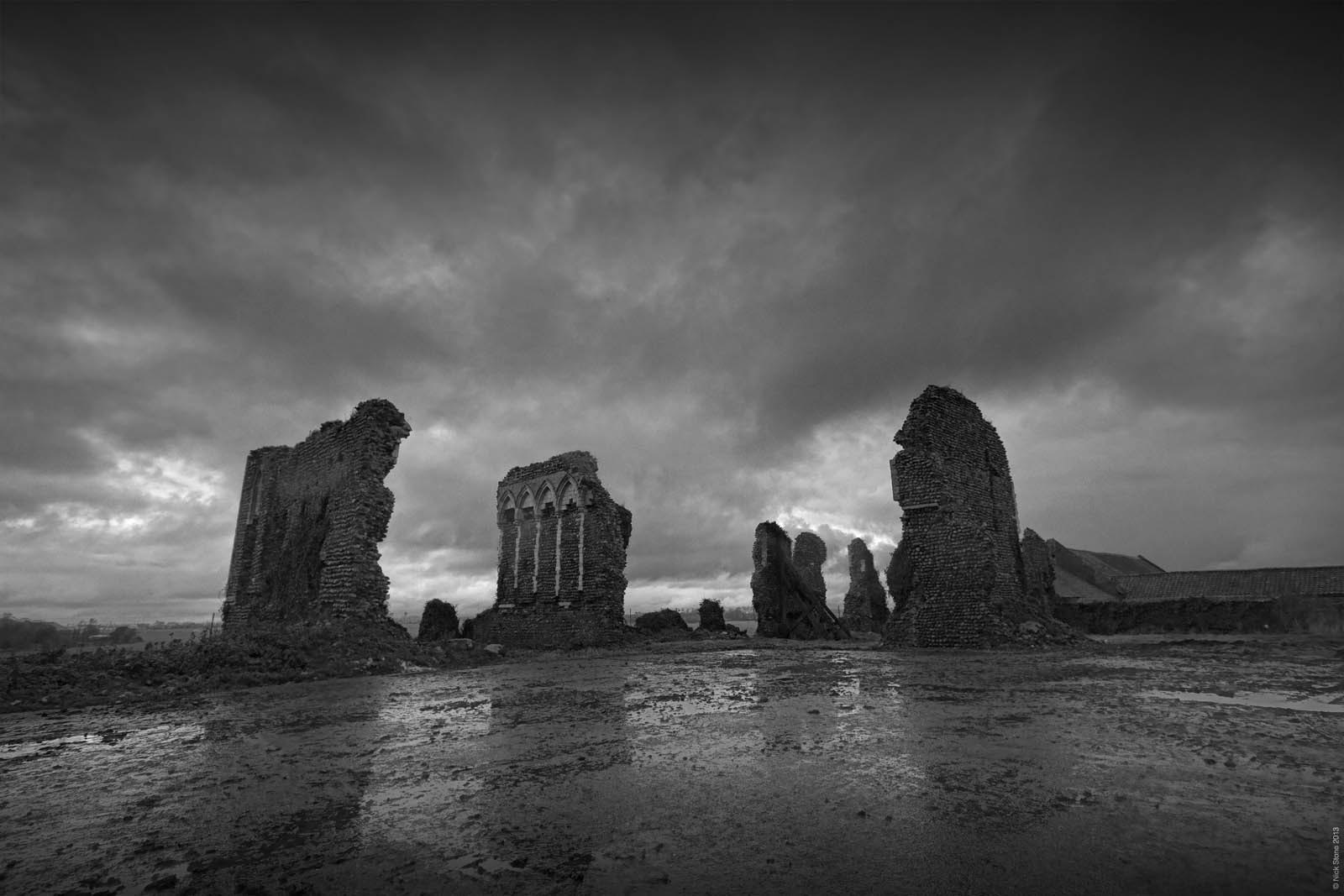 A bit of a hidden wonder, Bromholm or Broomholm Priory also known as Bacton Abbey sits on a piece of farmland just off the coast road as you enter Bacton from the Mundesley end. The Priory is situated on private land, the main surviving gate at the top of a row of cottages, what remains of both the gatehouse and the Priory itself reveals a rather impressive building somewhere back in the past.

The Priory was Clunic, founded in 1113 by William de Glanville, a Norman, the then lord of Bacton. It was built on a Holm, presumably covered in Broom, the name is possibly of Danish/Scandinavian extraction meaning a rise in the land. It would have sat between two now extinct rivers in land susceptible to coastal flooding. And would have been cut off the community to a certain extent from others living in the locality. It was a subordinate Abbey of Castle Acre which is over to the West towards King’s Lynn, itself subordinate to Cluny in France via Lewes. Bromholm was quite famous as a destination for Pilgrims as it contained a piece of the true cross and all of the associated shenanigans in terms of miracles and so forth that would have accompanied it in a land where religion was probably as rich and powerful as anything else of it’s ilk, including the then royal family, hence eventually it along with everything else like it succumbed becoming a victim of it’s own success, and was suppressed in 1536. It gets a mention in Chaucer’s Canterbury Tales, the tragi-comedic soap opera of it’s time thus “Help! hooly croys of Bromeholm, she seyde, In manus tuas! Lord, to thee I calle! Awak, Symond! The feend is on me falle.” which means something or other that I could probably work out better if I’d listened harder in English at school. The site was also owned by the ubiquitous local Paston family. I suspect a lot of the materials have ended up in cottages anround and about, it might even be worth doing a tracery hunt to see how much of the limestone ended up in other buildings, there is apparently none visible in the farmhouse. Rumour also has it that it had two other gates, both of which no longer exist. 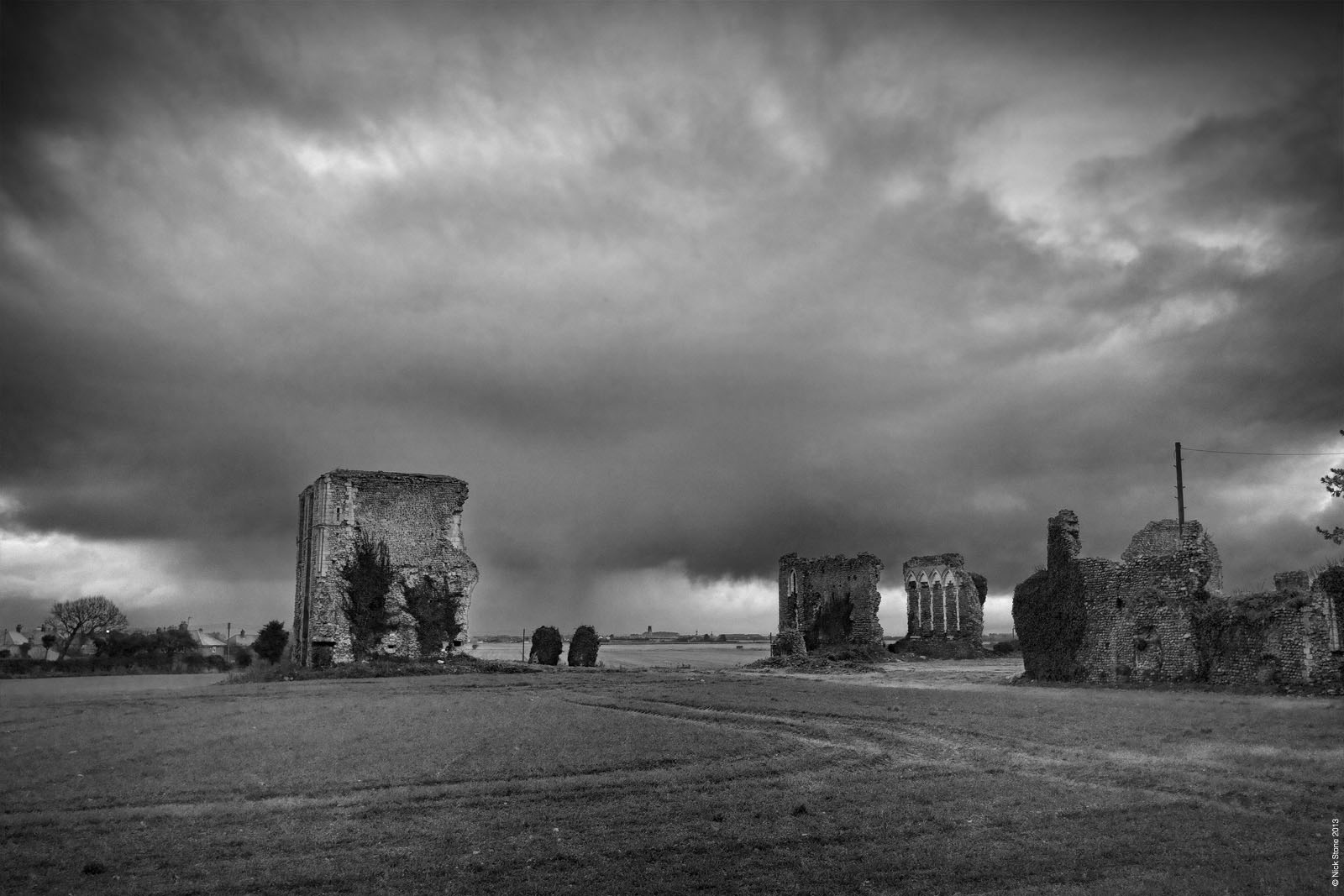 The site itself is curious, it’s listed; an ancient monument and falling down all at the same time. The area around the remaining walls has undergone some clearance work in the last few years. It being a farmyard it had apparently got a bit full of all that annoying farmy kit you get in such muddy places. Bits of the dormitory are propped up by large deals, part of the South Transept has fairly recently toppled over, The cloisters are buried under the concrete yard, it does in fact almost exactly map it out. The north and western nave wall are missing now laying in what is called ‘The Rubble Field’, which won’t allow for deep ploughing due to the amount of foundations in it. The south nave wall is still standing, it’s inner wall facing out. 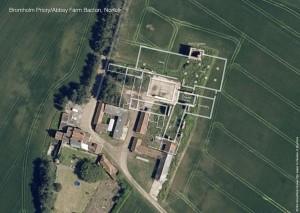 There is some impressive tracery still in evidence on what would have been the Chapter House, it’s lost its large eastern arched window fairly recently judging from some postcards I have of it in the 1920s and George Plunkett’s a photo of it in 1937 showing it rather more complete but full of farm junk and covered in ivy. The choir window which would have probably been massive but has long since vanished into the muck. The stumps of piers in the aisle give you some sense of the scale of the priory church. You can see roughly what I mean in the overlay to the right (click on it to see the larger version on Flickr). There are also some rather interesting looking cropmarks in the fields to the west that could be further buildings, and a lot of watermarking of older origin, possibly somewhere between 8,000 to 12,000 year old ghosts of glacial outflow channels. 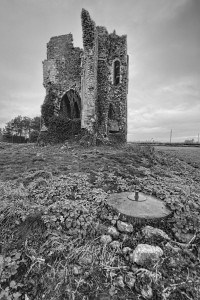 Perhaps the most complete part is the North Transept, it’s twin having long since gone to Jesus, it stands as a solitary tower, bits of detailing are still visible, although it’s obviously lost some bits of stonework since George Plunkett recorded it in 1937.Some of the flint is very loose, particularly noticeable when you get in close during a nasty squall of rain. I decided I’d rather be wet than concussed or dead in the end. Interestingly this is also the bit of the sight where history does that funny back flip thing where layers of history touch; the base of the tower was converted into a strongpoint at the start of WW2, so it has a rather unpleasantly disguised entrance and some fairly grim looking embrasures cut into it all the way round, plus two mortar spigots to quell any surge of imagined German invaders rushing up from the dry fluvio-glacial valley to the south east. This would have been an obvious weak point feeding as it does up from the virtually flat landing stages at Walcott just up the coast. It is also right on top of the site of Bacton airfield; a grass strip RFC, RAF and RNAC site used to defend the coast during WW1 against the menace of those aerial behemoths, the Zeppelin that rampaged like aerial hippopotami up and down the coast.

If we wind back again some 450 years of agricultural toil, there is ironically a tale that Cromwell attacked Bromholm with a cannon from Butt Hill, and the name Bloodslat Lane to the north is indicative of some site of either that or some other non-specific battle lost up to it’s ankles in the blood of folklore.

More photos of the site here, I’m also hoping for a return visit as part of a survey, but we’ll have to see how that goes, if it does, more to follow. 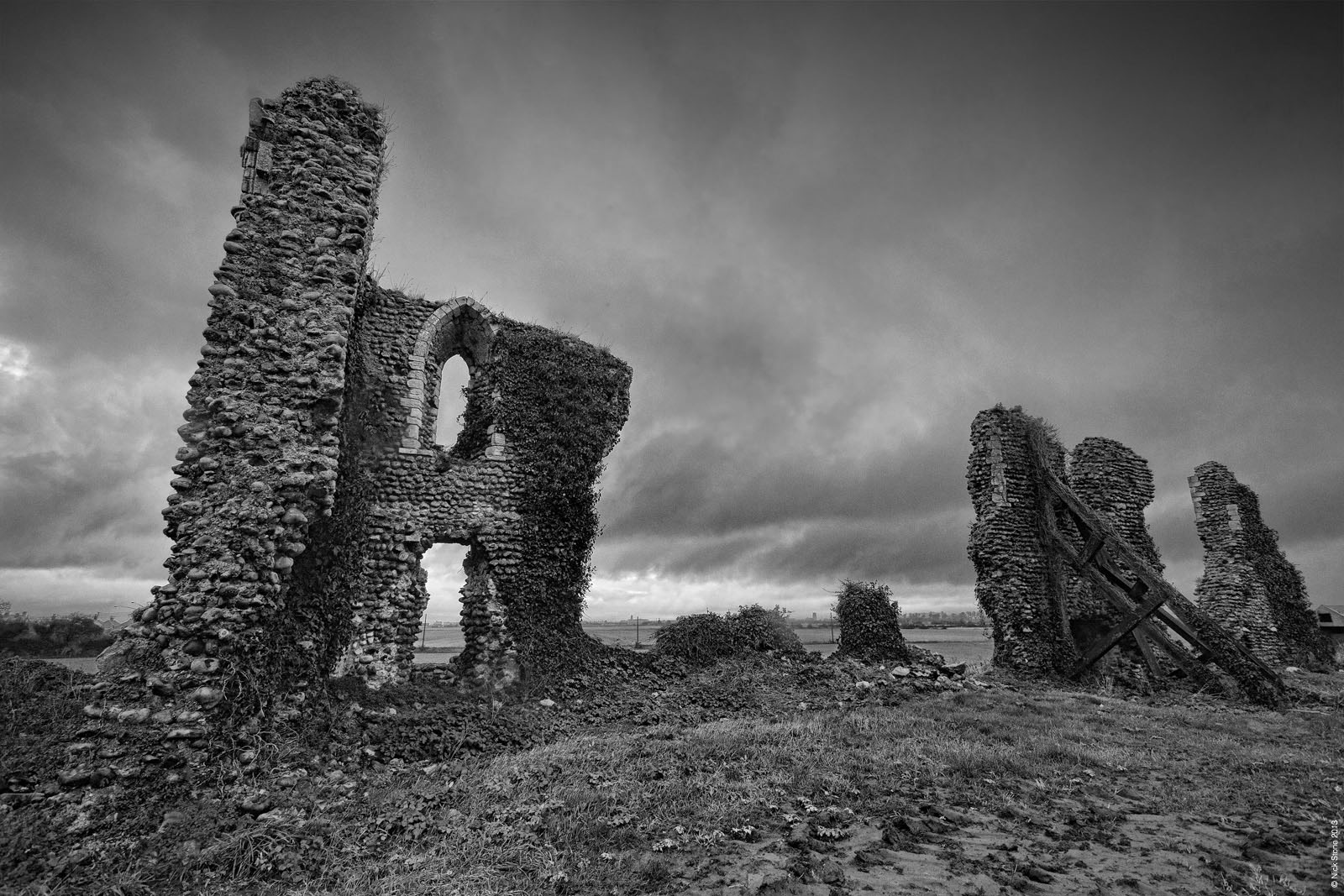