Lost in a landscape: Little Snoring 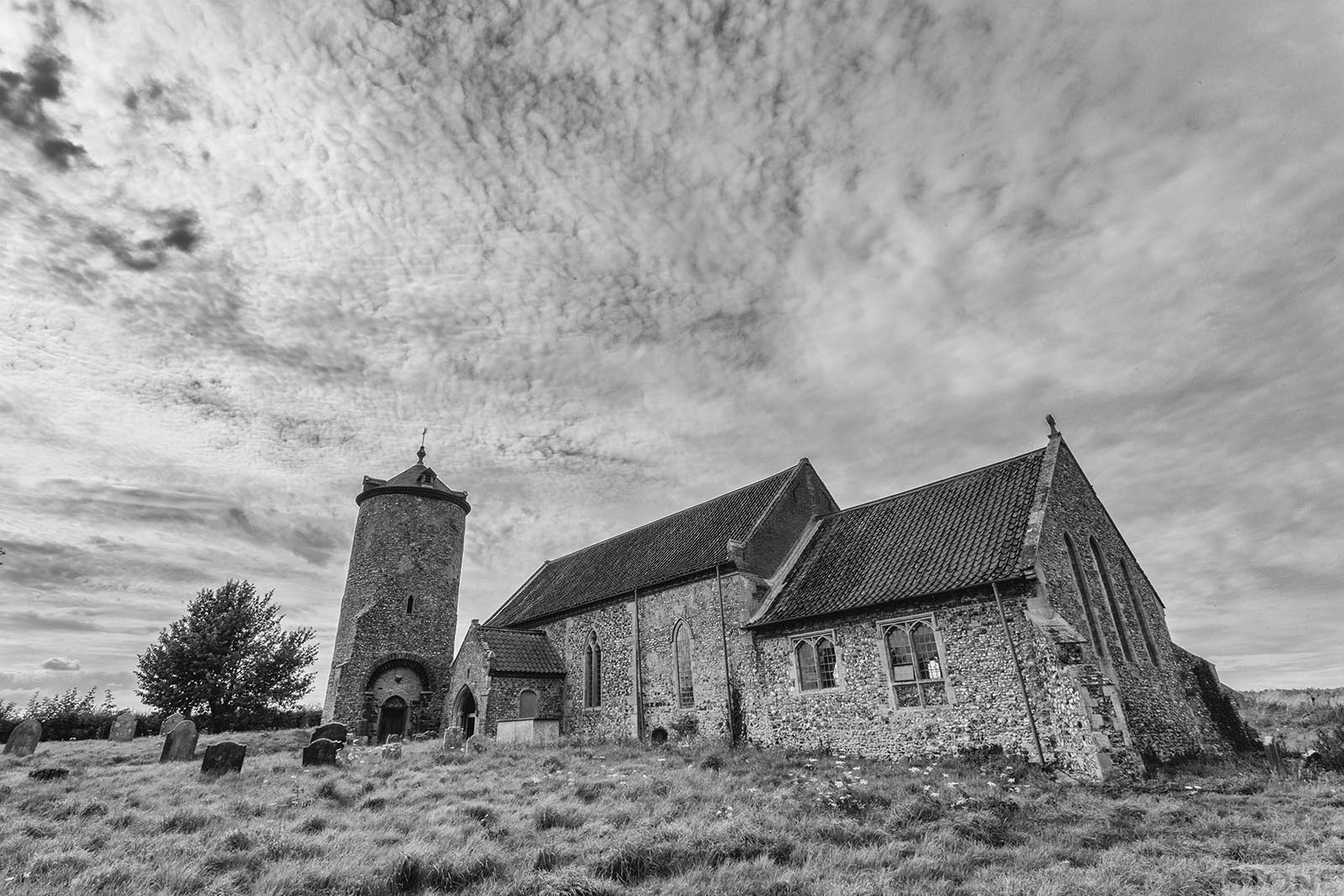 When you drive you travel along the edges of things, where modern life has built a wall along the edge of the land, the tall banks, berms and tree lines of the A roads and motorways where the litter and pieces of spent tyre lie in the dust. The piles of scrapings screen us from cross-winds and break up and block the rushing view. I get it sometimes, in the lacklustre suburbs, the protean ganglions of thin skinned mock-tudor, mock-Regency, mock-everything houses squeezed into tiny cost efficient blocks, the spread of light industrial and commercial spaces along the landward side of Tarmac – these rivers that deliver us and our products, the back and forth.

It’s easy to ignore what is in between, these crosshatched areas of fields and tiny settlements at junctions. No matter how much you stare at an aerial view or zoom in on Google Maps and look at the awkward angles of these little blocks of houses, churches and farms you never really see beyond it. It’s just a mesh of fields, threads of transit slicing and compartmentalising between the dark blocks of trees, over the shadows of watercourses.

I drove a bit this week. Days off took me out to various places to look at things, catching up on it all. But as always, it’s quite often the bits in between where you’ve come from and where you’re going that are the most interesting. The pieces where you are almost lost. Those lovely fragmentary landscapes grasped on the B roads from the shallow valleys barely wide enough for a car – overgrown banks, a Morse code of hedges and gaps, and a Mohican of grass running down the middle like a green spine. These are old ways that have barely grown beyond having some old tar slung on them, never widened or deepened. The banks growing up like bocage out of the piled up field waste, the road cut down over centuries by field and cart. The Street, High Road, Low Road, Muck Lane; the everywhereness of them out here in the in between. Each defined by people in the past, named blandly in a smaller world where the repetition of road names weren’t obvious because most people didn’t pass far from home. 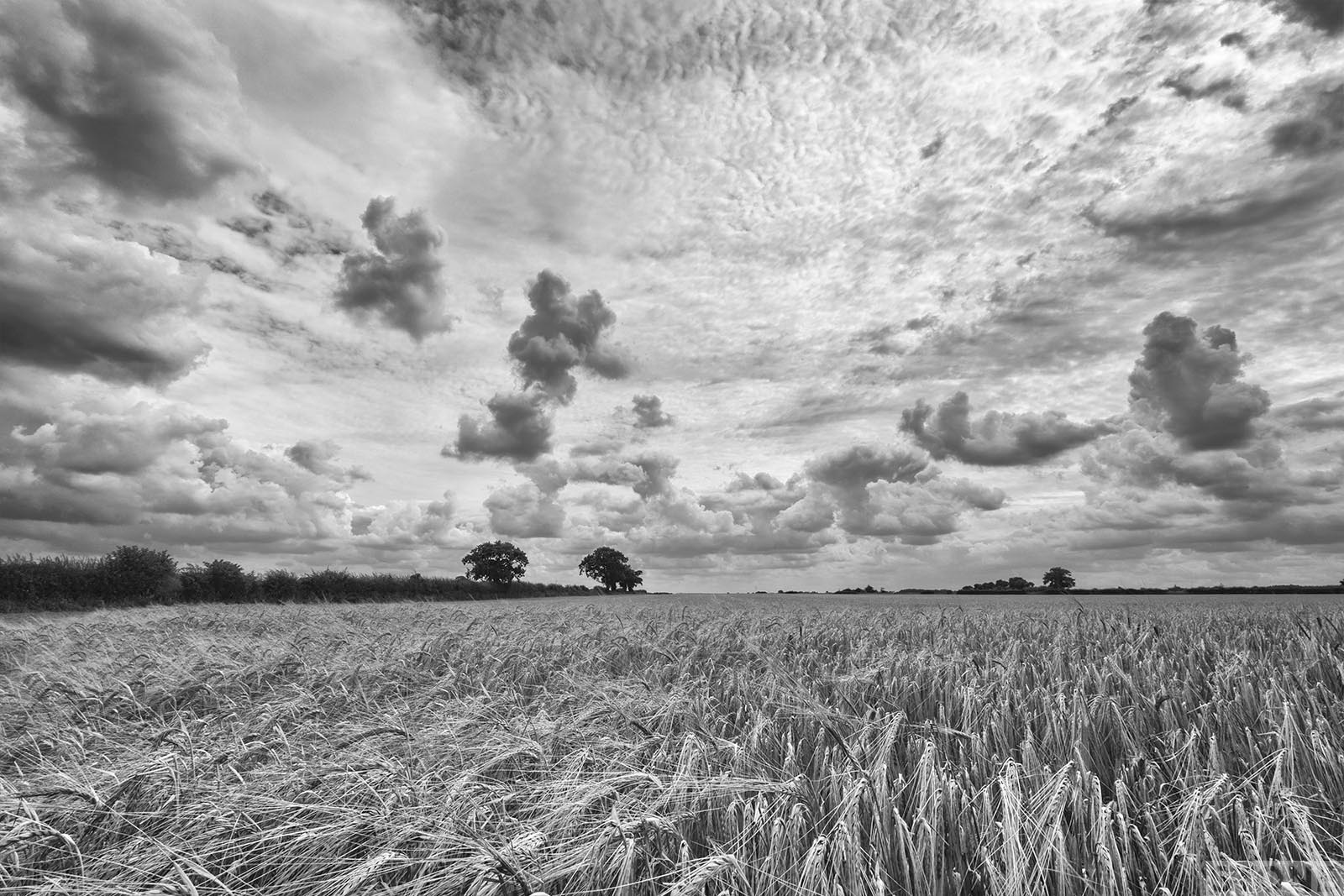 You can read all you like about something – words, paragraphs and pages of it but nothing ever really is the same as breaking a hill crest and actually seeing. And that’s what happened to me with Little Snoring. I’d been through it’s bigger twin Great Snoring to go and see something specific, to gauge the connection between something old and how it sits in a community now. If you’re interested in that other story that piece of uncanny is here. I finished that bit, looked at all the things I needed to see, leaving the cool air and the echo of a thousand years of whispers, songs and footfalls, the births, marriages and deaths of another church behind. Back out into the humid air and the broken cloud giving myself back to the hot breath of the oven like car.

The road curves down and then up, and as it peaks there’s a pretty thing. It’s unusual, stands out, the round tower church of St Andrews, set away from the settlement of Little Snoring. It sits on a low ridge between two streams feeding the River Stiffkey, still looking down on the people it serves and has served for centuries. Behind it around a slight bend the drifted village huddles. As with so many of these places, unless you live on top of them you don’t necessarily see or know the detail of the landscape. As I drive the church grows In my vision framed by the windscreen. I pass the concrete remnants of the end of the East-West runway of a temporary Second World War RAF airfield, similar to Swannington which played host to Mosquitos and also had a hand in the bomber raids that flattened parts of Berlin. The drone of Merlins from Lancasters would have echoed across these fields. There are a lot of them in Norfolk, unlike most this one is still has a partial runway not covered in Turkey sheds, it’s still used as an airstrip as it has since it was decommissioned in 1950.

There’s a car park set apart from the church – a patch of grass and gravel, a walk along the road then the path slopes up. A sign outside on a sloping gate warns of a bull, inside the churchyard the usual slaking slabs lean tiredly, teetering like busted teeth. The Great War memorial tips gently back against the skyline, one corner sunk, stuck against the moving heads of the barley and the dog walkers braving the road before heading up a track to the next low ridge. 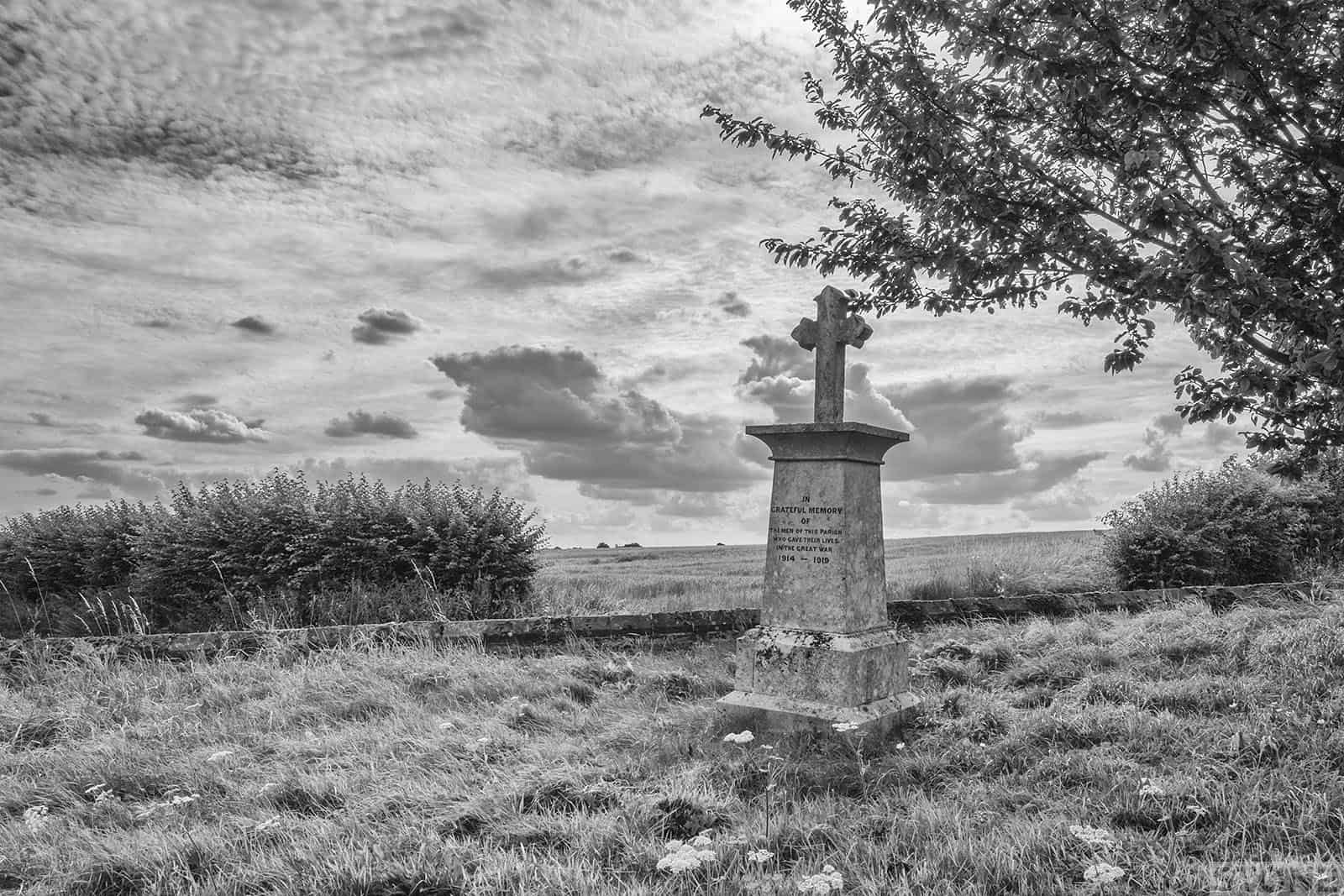 The church is a curiosity. There’s talk about Norfolk’s round towers being used as lookout posts watching for the Danes landing on the coast. You could imagine it here possibly, the church on its mound, this high point between the roll of the fields, the romance of the imagination. The Snorings pre-date the Danes, the name is Anglo-Saxon, Snaer-ingas, the ~ingas gives us a rough date; the settlement of an Anglian incomer listed variously from Domesday as Esnaringa, Snaringa and Snarlinga. The incomers filled a void in the flinted fields left by the Romans. How much the tower owes to the Anglians is open to question if in fact it does. It has Norman doorway and peculiar little Victorian hat too.

What separates the tower from the church is the fact that it is separate from the church. It appears to have originally been attached to a different probably Anglian Chapel. Yet has a Norman doorway. At some point the church has drifted North, a new most likely Norman building.

The new church shows it’s history in the styles it contains; windows from the eleventh and twelfth century to Elizabethan. Once inside it opens into a very simple space. clear and clean. To the rear are boards rescued from the officers mess at RAF Little Snoring – the tallies and victories, a list of raids connects it to it’s modern history, this was the church of the airbase. Along the Nave the church opens into the Chancel, it feels almost like something from America, a wide vaulted angled wooden roof, brilliant light unbroken by stained glass, effortlessly simple. You can almost imagine the ranks of the crews sitting in the pews, hoping, praying for a safe return. 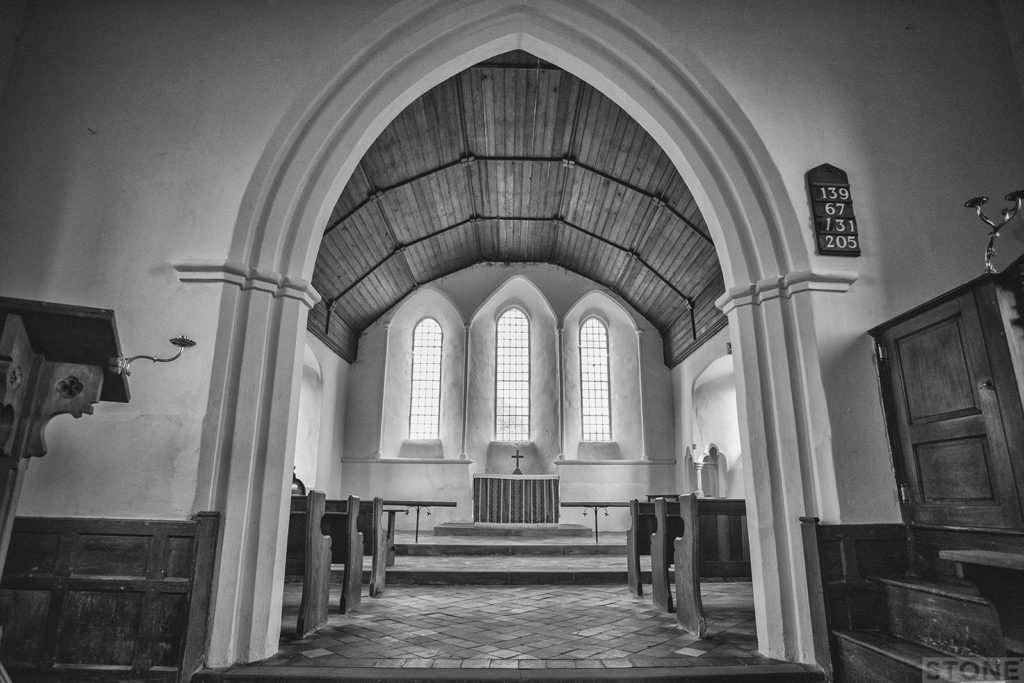 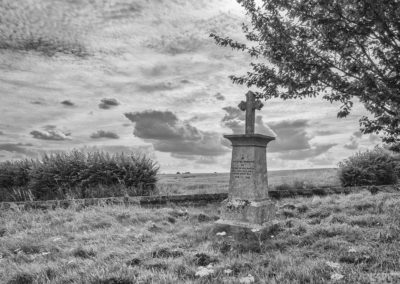 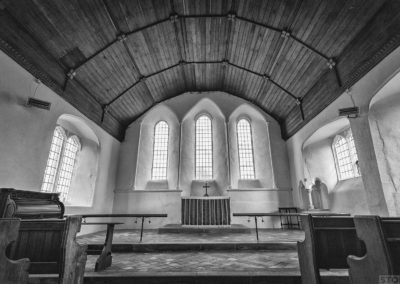 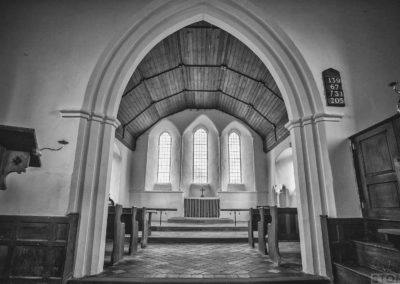 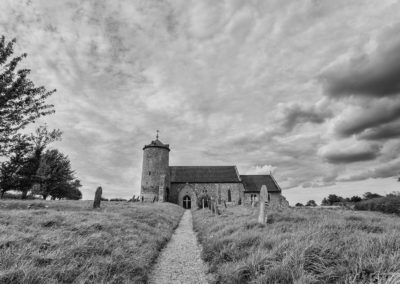 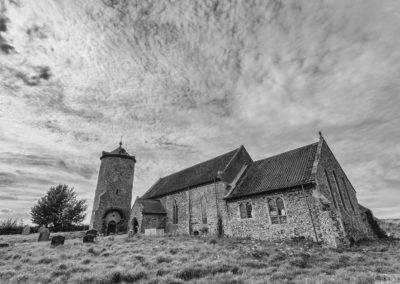 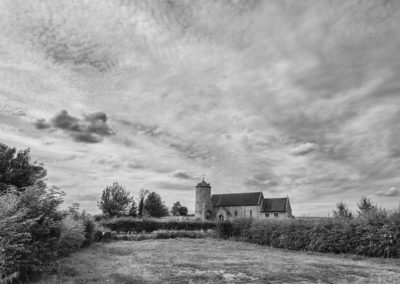 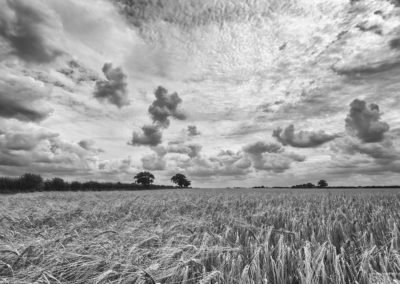