Lost in a Landscape: Scottow 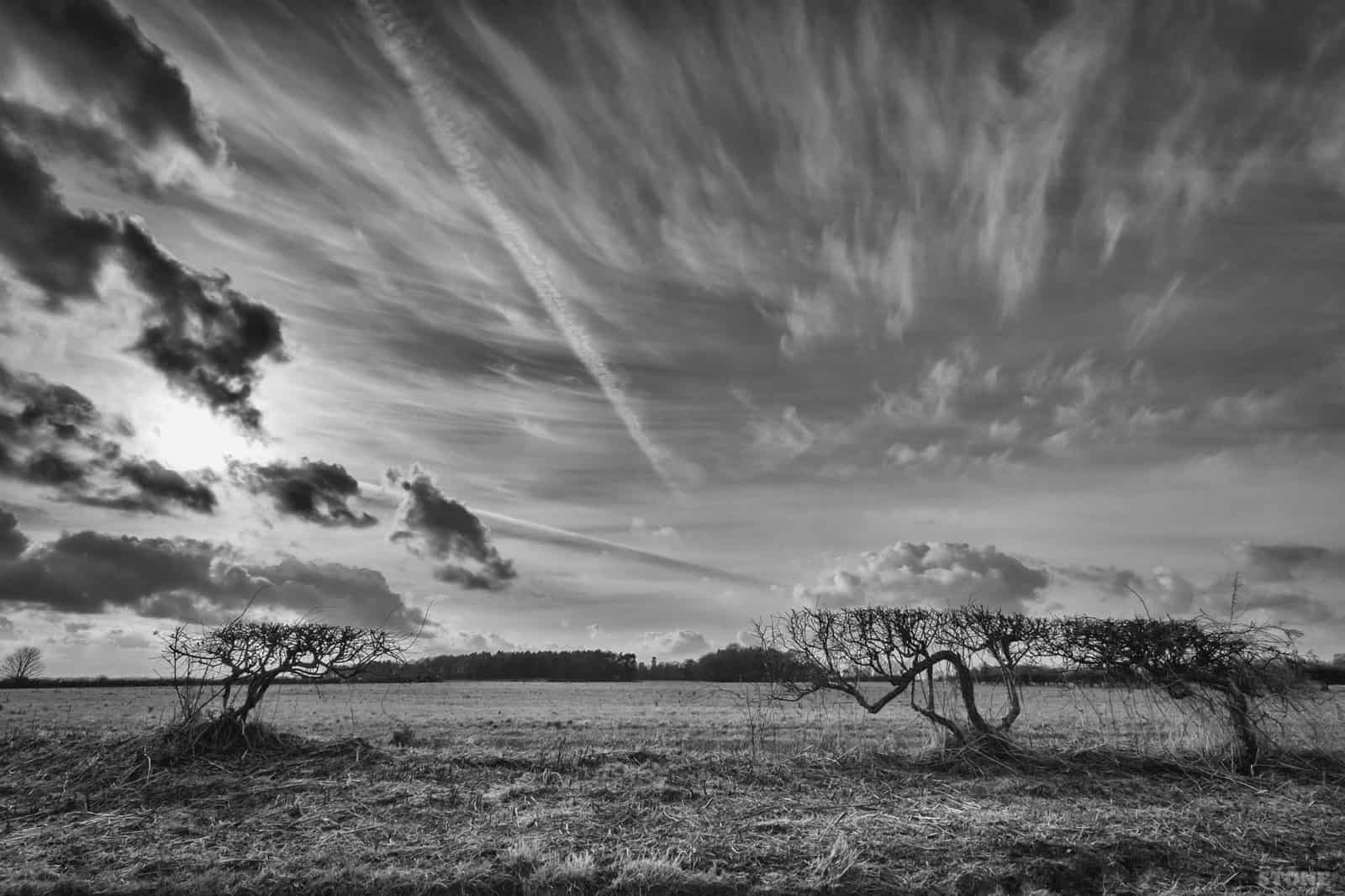 Memory has a strange tonal range, there are sparks of colour in between the washes of grey and flat spots of black or white. I have a very distinct memory of first learning to ride a bike. Oddly for some reason that escapes me it wasn’t at the hands of a parent although I think they at least one was there. I was taught to balance on an unfeasibly slim piece of metal with wheels at the bottom by our neighbours’ daughter-in-law. We’d headed out of town, several adults and one four year old, with his shock of blond Midwich hair, crammed in the front of Robert pale grey Austin pickup. Us two, five or six years old, sat loose in the back, hung onto the thin roped sides, rocked about on sacking protecting us from the worn wooden ribs which in turn protected the rusty bed of the truck from the heavy marble, granite and Portland stone it usually ferried about in it’s day to day guise as a stonemason’s cart. Today it was just us two and the pile of bikes, dust blown under the late summer sun for the few miles to these quiet lanes. The little pickup was parked up on the cambered gateway cut through a bank in a silent chestnut shaded back lane, the broken hulls of nuts already starting to litter the road.

We were lifted out with the bikes. The boys’ mum had a glamour about her, hair bleached piled up, she wore trouser-suits and a scarf tight round her neck – like a woman from a catalogue. They lived in a suburb of the city in a modern bungalow with a stone clad chimney and had nice furniture. She steadied the bike by holding the back of the saddle and one handlebar and ran alongside me stabilising the bike while I vaguely concentrated on staying upright, and without me realising – she let go. And so you wobble along, free. Another one of those fine threads which bind us into childhood stretched and finally snapped and coiling away. I pedalled my way through the next 12 years, sailing past the yellow and then whitening corn, the stubble-fields, the trees coming into leaf, greening and gradually dropping brown leaves.

We used to cycle a lot, a small circle from North Walsham that gradually widened during school holidays and summer evenings, small groups of us. Later it was mainly me and one friend. We had target places that seemed to crop up over and over again, an illicit now lost dump where we found old bottles and the prize of intact lawnmower engine, it was near Buxton, Bradfield and Swafield and their respective churches which worked like waypoints in the faint lifts and drops of the North Norfolk fields, and on to Felmingham Heath and Antingham in search of the wax paper skins of adders. 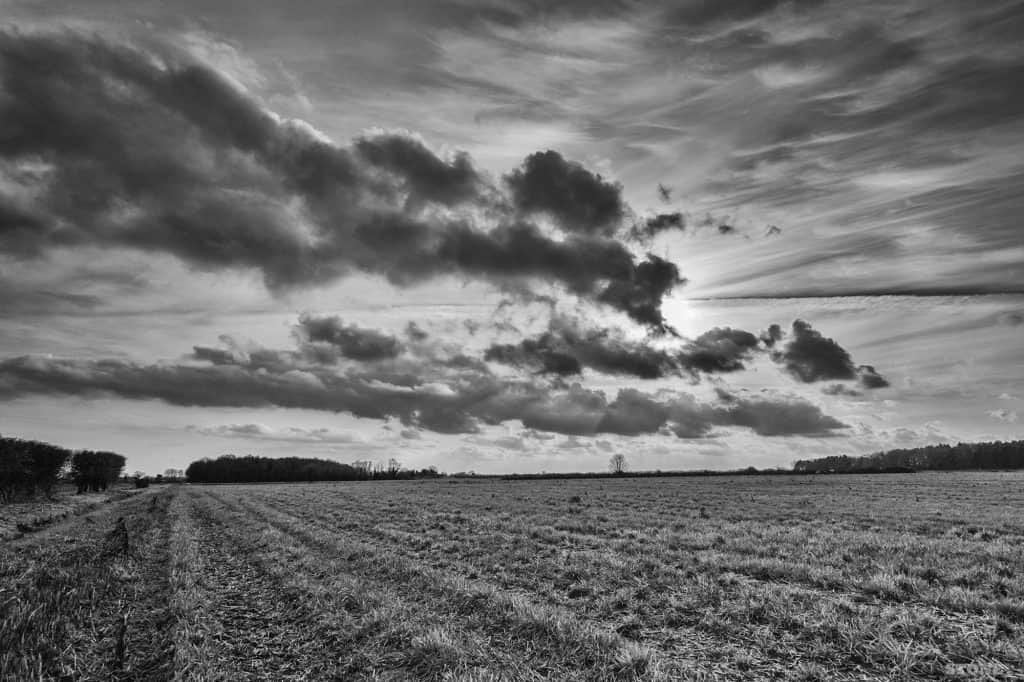 One other place which always stuck in my mind was R.A.F. Coltishall at Scottow – named due to the proximity of the nearest place with a railway station, not the place it’s actually in. There was a variety of angles in which it was interesting to us. On the perimeter you could stand under the flight path and experience the invisible bow wave and deafening touch of first the English Electric Lightnings, and later, the Jaguars climbing off or returning from patrolling over the grey of the North Sea where they shadowed lurking Russian Cold War bombers riding a thin invisible line along the coast. There was the base swimming pool which sat near one of the entrances which was open to the public in the summer holidays, near it a fibre glass model of Douglas Bader’s Hurricane sat of a pedestal. And finally for a curious reason I could never quite fathom we attached ourselves to the little cemetery and odd little chapel at Scottow, all these things waypoints, just waypoints of time and place.

We must have chanced on it once while cycling round the edge of the base – it’s not easy to find, tucked up near Badersfield where the old quarters are, not far the church and Scottow Hall. I’d guess now we were drawn in out of curiosity and then realised that beyond the brick hut on the left hand side stood rows of clean, elegant, white limestone. The dates on most put them clearly into the period from 1939 to 1945. To us two early teenage boys born closer to the end of the Second World War than we are now to the fall of the Berlin Wall these were like some codex, a message from the reality which sat outside the fictions of Airfix kits, Battle and Warlord, Action Man, and the kaleidoscopic nonsense of a lot of 1960s and 70s war films. This cultural detritus, all washed up along the edges of our teenage consciousness living as we did with men and women who had been there – those who remembered being shipped out, bombed, shot at, or huddled in the dark and nearly starved on bleak rations during the war years. But these graves were tangible evidence in our temporal landscape of the reality of what had happened here in Norfolk where we were growing up, something which somehow transcended all the above, because these were people, and not just British pilots; Polish, Czechoslovakian, New Zealanders, Australian and Canadian. It seemed rather mysterious at the time that it contained Germans too.

I passed my driving test, and using a very small amount of money I was left and some meagre savings I somehow bought a terrible car, more gossamer threads tying me to the tight circle of growing up in North Norfolk breaking behind me. The interest in bunkers and airfields waning in the hurricane force tangible realities of later adolescence, we just stopped coming here. Then one early summer evening after a short, sharp argument with a suddenly ex-girlfriend, I’d zigzagged here along byways from a spot in the watery islands of Broadland prolonging my pitiful and unanticipated solitude, drowning in a tidal wave of fresh meaty teen-angst against a backdrop of the sun dipping slowly into the treeline. I’d recognised where I was and stopped, sparked up a cigarette and opened the gate and wandered around inside this comfortable containment of the hedges, finally giving up and sat on the path between the mix of nations and the locals, smoking one cigarette after the other. 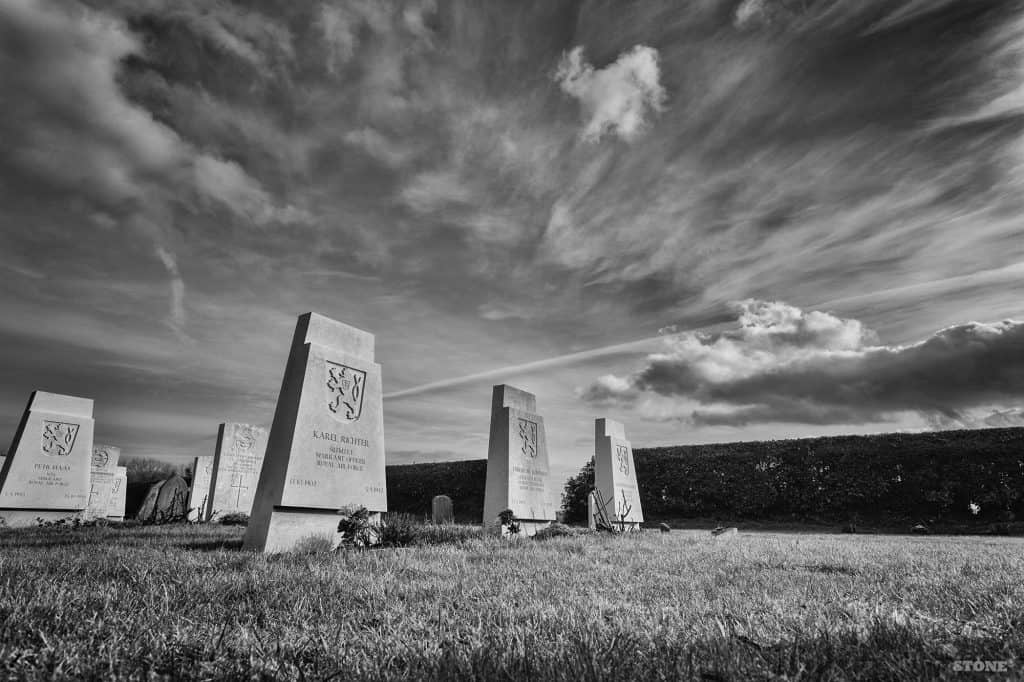 I think this was when I must have realised reality really wasn’t the ‘Achtung! Schnell! Hande Hoche Tommy’ – enemy in grey uniforms and Stahlhelm, running and pretending to die, between the flash bangs and splashes of tomato sauce, arms flung up in the cardboard and stucco Hollywood ruins. These were real people who had actually had died near here, doing things they were told to do, which they may or may not have believed in. And that was when it occurred to me we buried these men in the corner of their foreign field on our then embattled little island, not just the reverse, not just our people over there. And that when my dad didn’t answer stupid questions about what he’d done in the war, it was at least partly because it was about real people and it hurt – not just celluloid or cheaply printed comics, nor bravado and tales of daring or heroism, it was about fear and horror and this. And he probably didn’t really want to think about it. 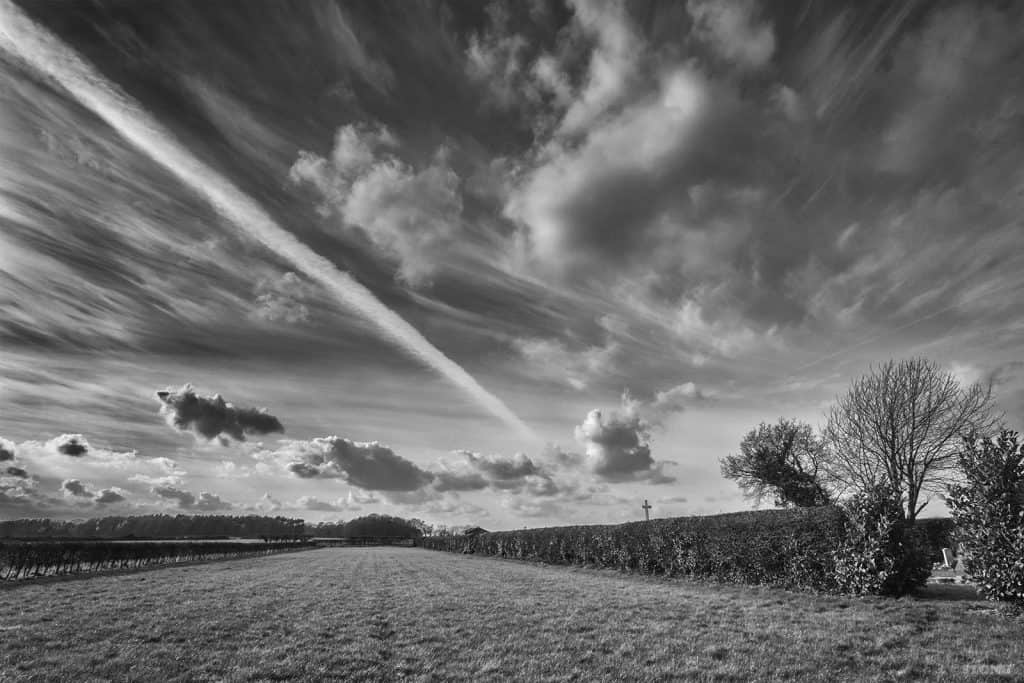 The weather today was peculiar; thin very high cloud giving the sky a strange fast-moving, bleached height, lower cumulus caught in a diffused sun silhouette easily against the white canvas. The sky cut by contrails dense enough that in the sun they cast shadows onto the filmy layers below. It’s uncanny, standing in here after so long, looking down at these airmen from several different pasts, below a sky full of ghosts. This is a flyer’s sky, perfect to cut a line through. And down here are the vestiges of that huge conflict in a Norfolk field, men who individually and as crews flew from and to here from Lincolnshire and Kent, Schipol, Soesterberg and Gilze Rejen in the Netherlands and Chartres in France. In Spitfires, Hurricanes, Beaufighters, Dorniers, Junkers and Heinkels. Some extinguished in the cold North Sea going home after bombing Hull. A Czech Lad training at night, a flash of vapour firing the wing and engine coming down like a comet, a flash of light in the ploughed land between Frettenham and Spixworth. Germans in flight heading home across the county pursued by blacked-up Blenheims across Salthouse Heath, bought down on fire between the creeks and the samphire.

They are all of note, and worth looking into, whether it’s farmhands or pilots, wireless operators or seamstresses, because cemeteries hold our stories after the end. It’s difficult to pick anyone out, but curiously, and maybe slightly pertinently in this mix of nationalities, there’s a Hollywood burial here – Otto Kanturek. An Austrian born filmmaker, who escaped Nazism by coming to London. While filming aerial scenes for Tyrone Power’s ‘A Yank in the RAF’ The Anson he was flying crashed into the Hurricane he and Jack Parry were trailing, and here he is.

The men were brought here from across the county, washed up by the sea at Mundesley, another south of Cromer, another German lad floating unknown, still not formally identified. There’s Norman Campbell of 242 Squadron who flew alongside Bader. One of the few; a Battle of Britain pilot whose Hurricane crashed in the sea while pursing a Dornier Do17z off Great Yarmouth at 9 in the morning in October 1940. 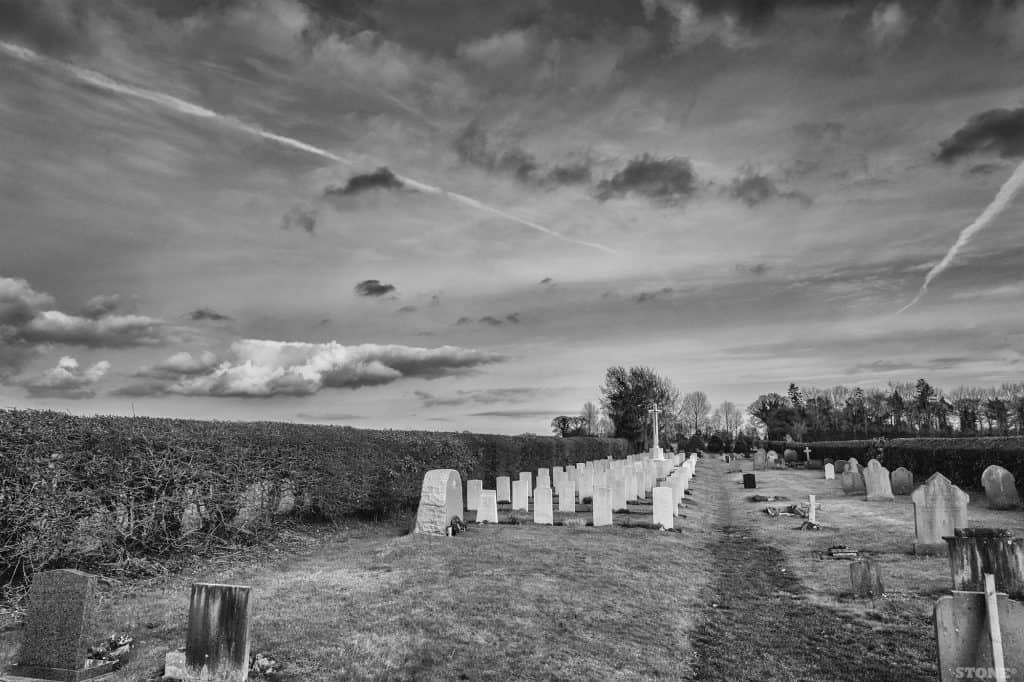 But here they are comrades and adversaries lying together brought from across Europe and the Commonwealth in a parcel of land not much bigger than a tennis court, beside the Jones and Howards, the people of Scottow already sown firmly here when the concrete echoed with Merlin engines, the cold war Lightnings bucked against the ground, even the glint of the solar panels was a future dream in the potato fields and flattened mounds of our past. 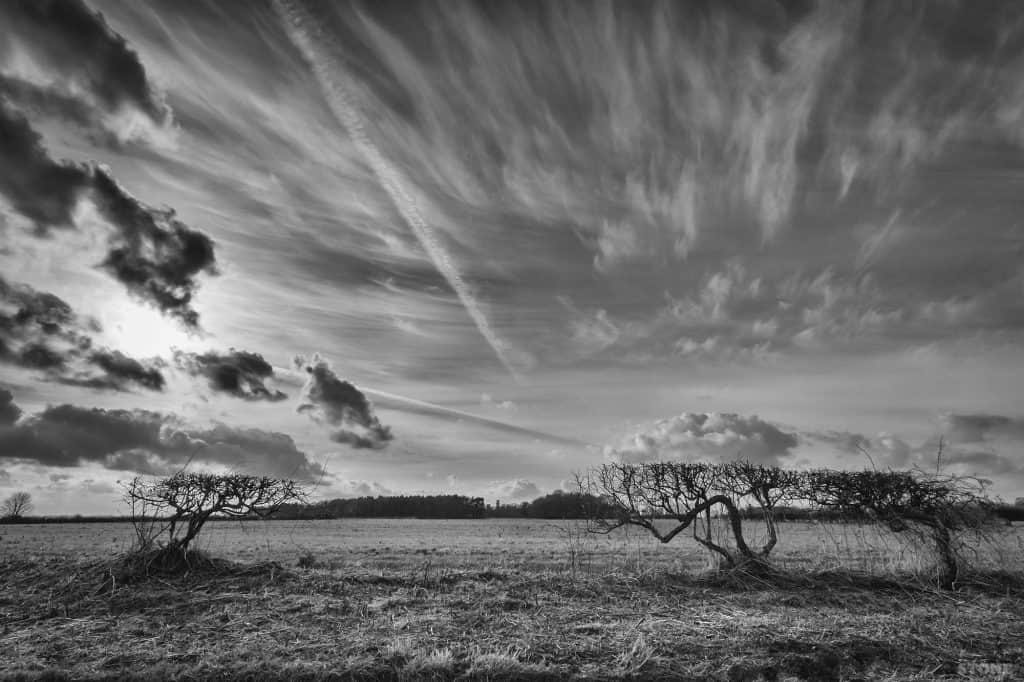 Some of the Czech crews at Aircrew remembered

Thanks as ever to Steve Smith for the reminders and cues on who is what and where they lie.