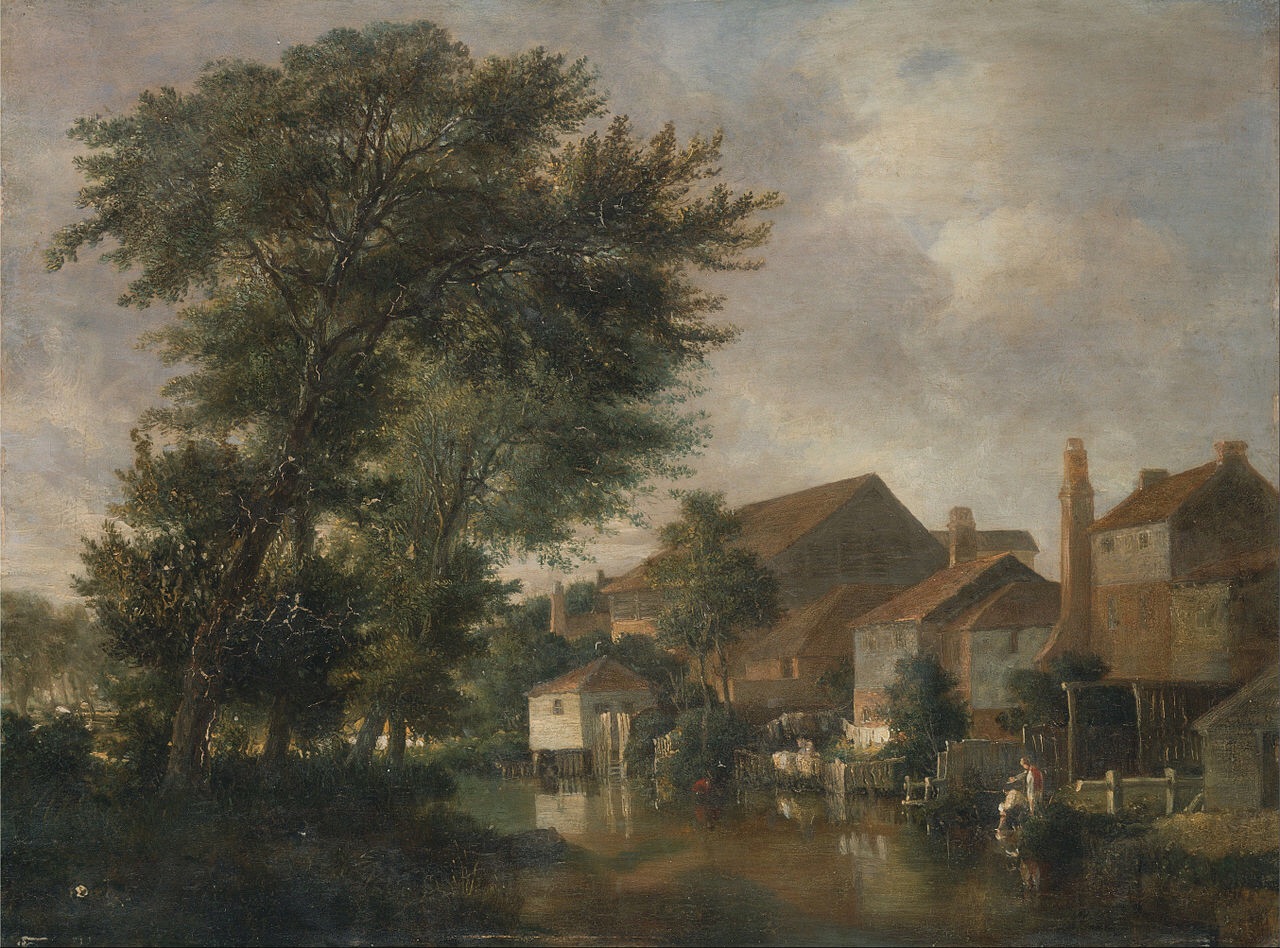 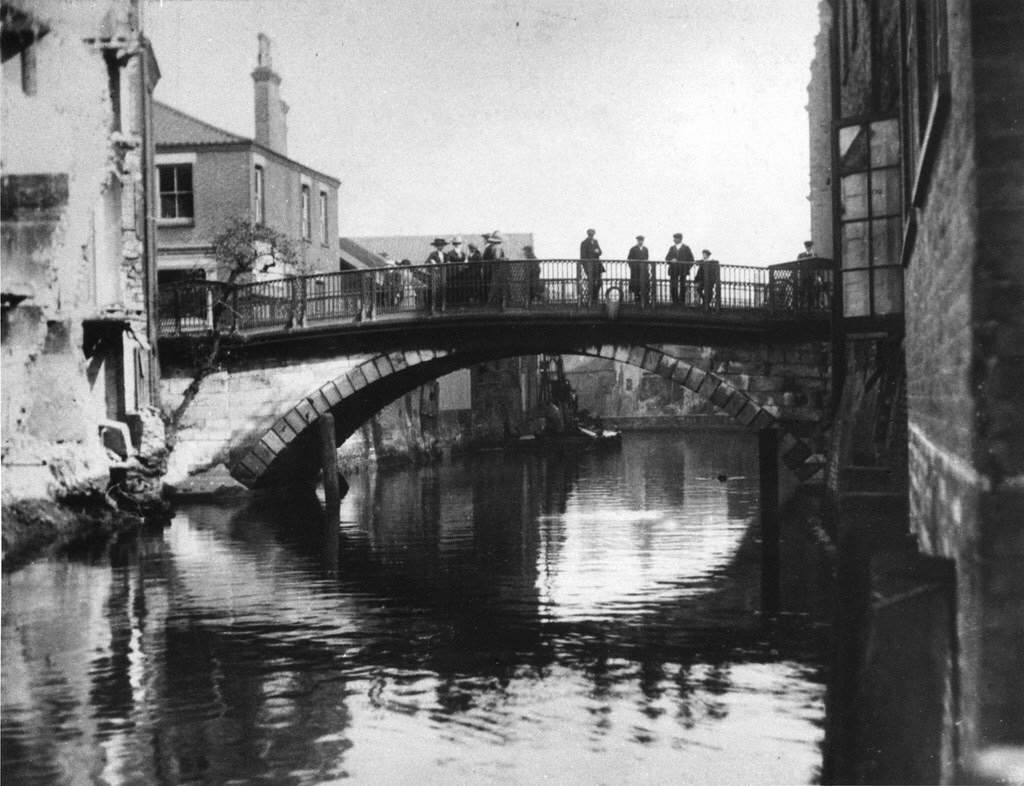 I’m nothing if not unoriginal, this has come about for two reasons; me watching the excellent Thames Discovery project at work on Twitter, And more recently an idea of Jon Welch’s based on seeing this rather remarkable work of Art by Stephen Water; his is hours of painstakingly plotting loads tributaries and streams flowing into the majestic stinky artery that was and is the Thames. The Wensum is another matter entirely it’s familiar curves on a map are home, and as people like Steve Silk (Wherryman’s web @wherrymansweb on Twitter) will tell you it’s a highly individual thing full of interesting facets from its rise in the county near Whissonsett through its tidal reaches to the point where it loses a fight over its name with the lesser mortal that is the smaller River Yare and heads off to join in the giant river gunfight with the Bure, Thurne, Ant etc etc, and out to the slate of the North Sea, but it’s not the Thames.

We live in a Waterland, the Broads are hugely important as a playground, the ecology, the wildlife, the getting away from the bloody noise. But the Wensum is the river of the city and that’s what concerns us here. It’s formed a heart for the people living in the middle of the plain of Norfolk for thousands of years, fishing, dyeing, tanning, transport, industry. And what’s interesting is its not the only river in the city, there are more, not as many as London obviously, but a few interesting waterways that flow below our streets even now in some cases.

A city is constructed into and over a landscape, it rubs things out as it spreads, it fills in holes and patches over things, rubs the corners off bits that stick out and get in the way, be it burial mounds on the ridgeway of Ber Street, Barrows under Sweetbriar, layer on layer of life squashes the detail down including this awkward little rivers. contrary to popular thought, Norfolk’s not flat, Norwich isn’t flat, it’s built into the flood plain of the Wensum, we’re sitting in the comfortable curve of the cat’s tail. Which rests up against the bulwark of the high glacial stopper of Thorpe Heights and Mousehold. Stretches of it providing protection, from attack where medieval walls aren’t needed.

The handful we have are indicated on this map knocked together in illustrator, based on descriptions at hand from books, reports and bookmarks, there’s an element of guesswork involved as to some tracks of the rivers.

The Dalymond or Dalimond is my local lost river, I’ve read two different variants of the course  it rose somewhere near either Sewell Park or possibly even further out towards Catton/Angel Road and flowed Heath Road, crossing Magpie Road and flowed along Botolph Street, crossing Magdalene street (or Fyebriggate) some sources now indicate two possible courses, one being it enters the river near St Andrews where a Culvert is visible, others, including Brian Ayers who have found a channel or dyke (Dalimondyke) think it more likely it flowed into the river opposite the courts near Fishergate.   I have read references to Calvert street being a course for it too, the name Calvert possibly being a corruption of Culvert, this appears to be a red herring as it may well be named after John Calvert; a sheriff of Norwich who lived nearby in the 1700s.

The Great Cockey rises somewhere around ‘Jack’s Pit’ on All Saint’s Green and flows down, across Red Lion Street, it seems to have skirted the Jewish Quarter where Debenhams is according to records, so it was an open waterway in the fourteenth century, it then ran along the back of the inns and down little London street, possibly down somewhere in the area of St Andrews Hill and the across St Andrews Street, then possibly parallel to St George’s, then entered the Wensum near the Playhouse, it still does in fact, the Culvert is visible. Cockey is a colloquialism for stream around here, so what we might lack in imagination we make up for in innuendo potential.

The Little Cockey, and don’t we all know someone who we could call that, rises somewhere around Chapelfield, flows across St Giles and Bethel Street and down the steep fall towards St Benedicts, finally entering the river proper near Dyers Yard. You can only guess at the actual course, but there are clues,  Willow Lane seems more proportionately likely given the water loving trees, there is a mention of a ‘Willow filled valley’ in that area in Fifteenth Century writings.

The only other bit of river that was river but isn’t anymore sat in the turn of the Wensum near what is now Halfords on the roundabout at the bottom of Barn Road. This whole area was marshland, so difficult to get across that there’s no city wall below the terminus on Barn Road, so damp and low that the city wall around Hellgate, or Heigham gate sank a bit.nthe marsh spread back up the river again the city wall hints at the extent, what is believed to be the terminus tower in the garden behind the Old Dun Cow pub on St Martins is a fair way from the current built up river bank, unlike where the wall meets the river in Carrow; Boom Towers sit on the banks, chains spanned the width stopping the traders and potential invaders. The marsh extended up and still nearly exists in Train Wood amidst the remnants of City Station’s concrete, tile and engineering brick and the water filled holes one of which is Norwich’s only remaining crater from the Blitz. Lower down where the station platforms were built they actually straddled the two Wensums bridging onto an island. When the bombs fell in 1942 the beautiful portico of the station was already cracked as it settled into the bog around the threading river.

The only remaining lost water on this central city map is the canal built from what we now call Pull’s Ferry; the watergate, to lug the huge Caen Limestone chunks, Nordic wood and metal nearer to the Place where it was gradually being turned into a Cathedral. There are of course probably other waterways lost in our city softened landscape, I’ve omitted Mouseholds dry valleys, that’s a whole story in itself who knows what is lost in the industrially damaged glacial heath, I’ve also omitted the marsh around Mountergate, what a story that will provide once it’s been unpicked by the archaeologists working on it.

Addenda (6/2/15): Part of the point of this is engagement with learning and finding out more about our landscape and built environment, I’ve been able to add to this thanks to the input of Dr Nicholas Groves and Ben Bullen, who have added some extra details. Nick has added several other streams or Cockeys that aren’t as easily available in general information and confirmed the existence of one I wasn’t sure about. The Muspole or ‘Moss Pool’ (or Mouse Pool if you believe some corners of the internet), ran from the area around St Mary’s Plain, it seems to start in another wet area, probably boggy and low lying, and ran down to the Wensum possibly at Fye Bridge I’m not sure about this as there area  few culverts along this stretch. It is entirely possible these are either modern storm drains, or are part of an older drainage system that still exists under the streets.

He has also informed me of the existence of Dallingflete which ran from the area of Greyfriars along the Northern end of Recorder Road into the Wensum to the North of what is now Prince of Wales Road. and also Freshflete which supplied the Austin (Augustine) Friary on King Street, The friary no longer exists but it was in the vicinity of Abbey Road with River frontage.

Ben Bullen in his capacity as a surveyor has been able to add a cockey, as yet unnamed, was found during ground works to prevent cracking at the bowling alley on Riverside, allegedly the presence of the lost river was probably the cause of the problem.

Thanks to Steve Silk for a couple of extra pointers regarding the Dalymond too. 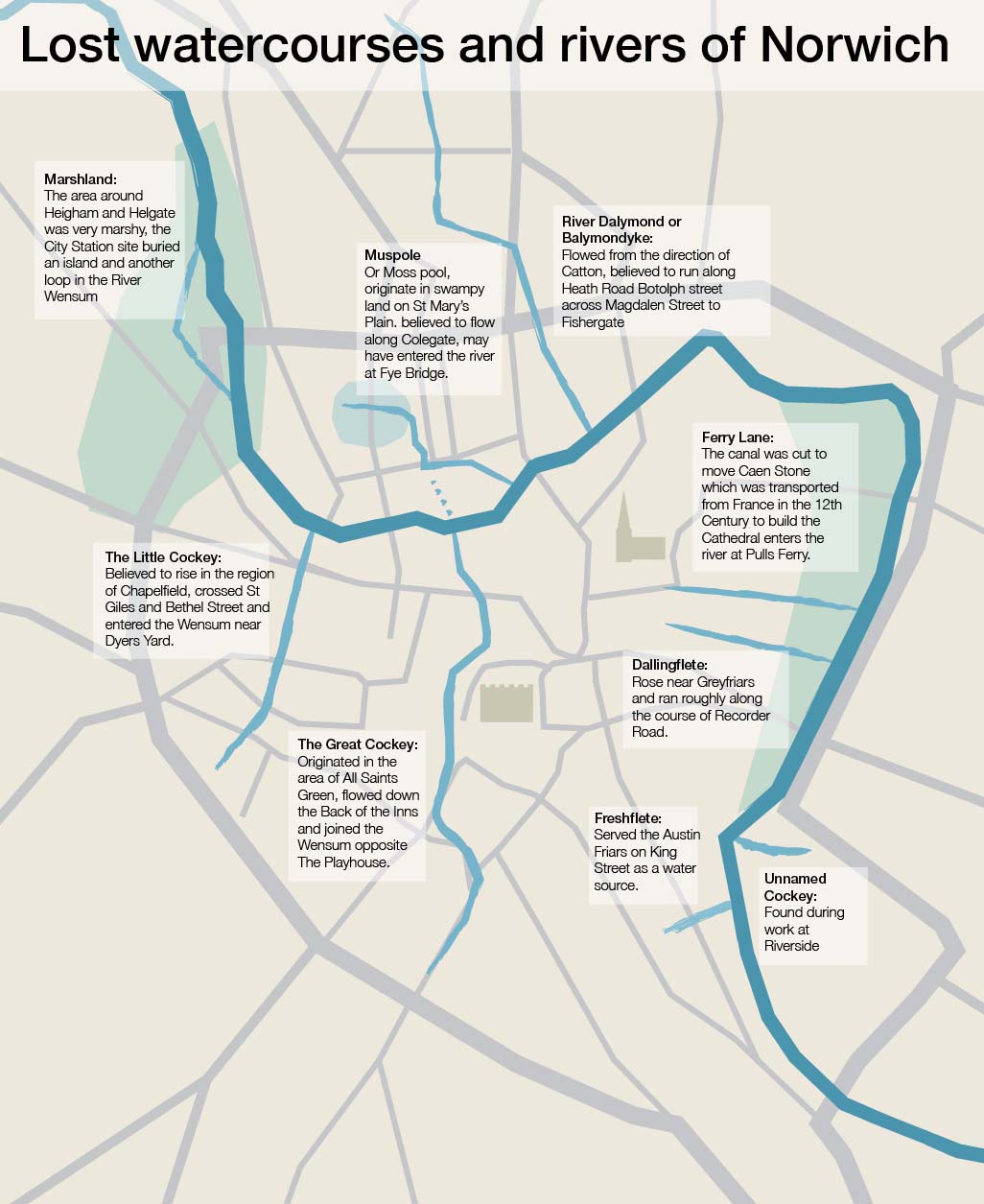 Stuff you can buy