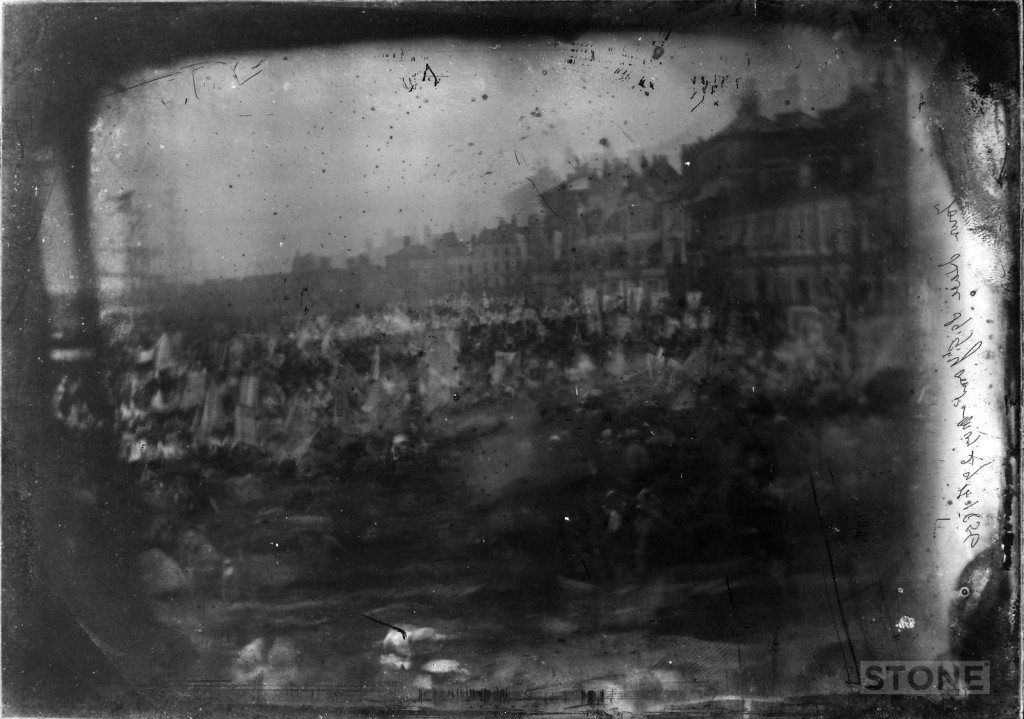 I’m always on the lookout for old photographs, negatives, slides and plates. In particular, the old, forgotten and unseen. The vague visual detective work involved in trying to work out when the shutter fell as much as where, it is that act of identifying with a fixed point like a post in the flow of a stream to tether up to. Glass is always special, it touches an era far further back in a lot of cases, a different and more delicate form of recording. A week or so ago a friend, Nigel Parke (of Undercover Books), came across a box of plates and by off-chance showed them to me. They are generally in pretty bad condition; several have snapped or got corners missing, they have flaking emulsion, watermarking and scratches, the past peeling away in your hands from the edges inward, the present framing them and yet eroding them away. Some are in exceptional condition, I’ve shared a few here, because what are they if you don’t, they may as well vanish.

It appear that they date from at the earliest point the 1850s. For once it’s not a case of examining a building, a dress or a hat style, or staring at shop signs referencing them to directories and scraping the net. In this case it is effortless, someone has scratched a date into the lavender oil varnished emulsion of a plate. It’s is of course doubtful that they all are neatly from from exactly here, but it at least gives a starting point to pin something onto. There’s a mix of subject matter; they all appear to be Great Yarmouth and the area, some feature the Nelson Jetty, others fishing boats and tall ships. There is a large house sitting between two windmills I can’t place. There are children hovering in front of the box camera on the beach and people working among herring boxes and kreels and pots. The best shot ones are of what appear to be performers posing on the beach.

There are stories here, ones we can only imagine now. Nearly lost in the dreamlike quality of the flaking edges and marks, the crackle and discolouring on the shifting damaged varnish, time breaking the seal and destroys these fixed points in the past. There is one particularly interesting plate. It is rather badly damaged and incorrectly exposed. A blurred shot of what appear to be Yarmouth somewhere along the front A tall ship visible just. a double image in the background. In front of it a layer of what could be marching men, a parade or and inside the ghostly faces of the crowd crowned by bonnets staring through the fog of the double exposure, she stands there amidst the shifting sea of people staring back at the camera, looking forward at us looking back at her, all of it held under the sooty skyline. There is a date scratched into the damaged emulsion, May 29th 1856, a day nearly one hundred and sixty years since the lens cap was moved away for a few seconds, light bounced off the subject concentrated through glass onto a sensitised layer in the dark of a wooden box and then lifted out in the dark and bought to the surface, then frozen and fixed onto the glass under red light. The day is the date of the celebrations in the town of the end of the Crimean War, now it is held here again, this time in these pixels.

These photos were taken very early on in the life of photography. Technology had barely shifted from the almost tempera-like techniques of painting; using egg albumen to stick the silver salts to the glass on the early Calotypes, we are past the camera obscura and the testing tars of Daguerre and Fox-Talbot and his oils, Some of these these look to be wet resins of Scott-Archer, the wet plate Collodian, you can almost see the brush marks of the sealing layers painted on. It was an expensive time-consuing and intricate process. And if we step away from the ubiquitous smartphone camera the now ever flickering eye recording every meal, cat and child, and rush backwards through the digital devolution of the last 15 years, onto the cheap and flimsy everyday throwaway film cameras, the popular snapshot of the cheap mass produced Kodak boxes, disk cameras and on backwards through the rangefinders and folding breast pocket cameras, back to the early photo-consumer days of the Ilfords and the Box Brownie and even beyond; A place where only studios existed and even further before we reach these sorts of dates. These photos are unusual. Taking a photo was a performance, attracting attention in the same way camera drones did and still do.

It makes me wonder if we may be looking at the work of someone like Captain John Penrice, a local man and polymath, who in between writing a glossary of the Quran, collecting art and being a soldier displayed an early interest in this new thing; playing with and exhibiting his Calotypes and Collodians and prints… A curious thing the recognisable but unknown.

Top feature plate is the date etched one of the Town Hall Square.

The etched location and date on the parade picture: Town Hall Sq Gt Yarmouth – May 29th 1856. (negative detail from main image)
(thanks to Jess and Gareth for the update on the writing) 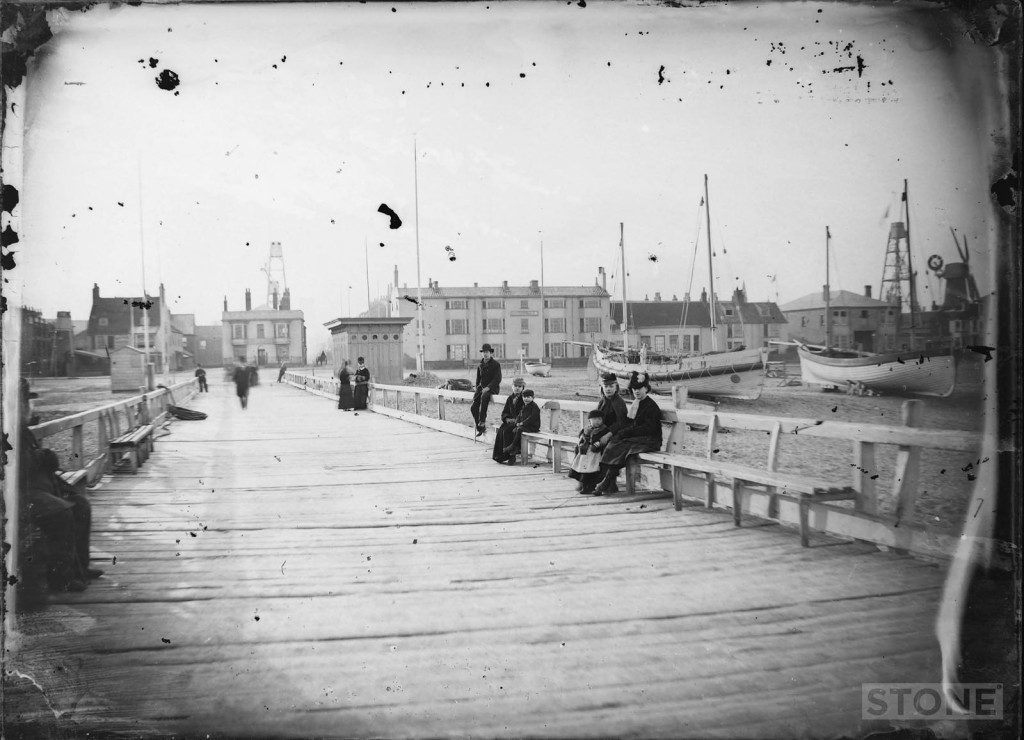 Nelson Jetty? clothing indicates this to be mid 19th century, blurring visible on two of the people. The best shot in the batch. Remarkable.
(The Marine and Barking Smack pubs – Karen Wallace, The windmill in the Jetty photo is possibly York Road towermill sometimes known as Papworth’s Mill or Jetty Mill – Matthew Hodder with thanks) 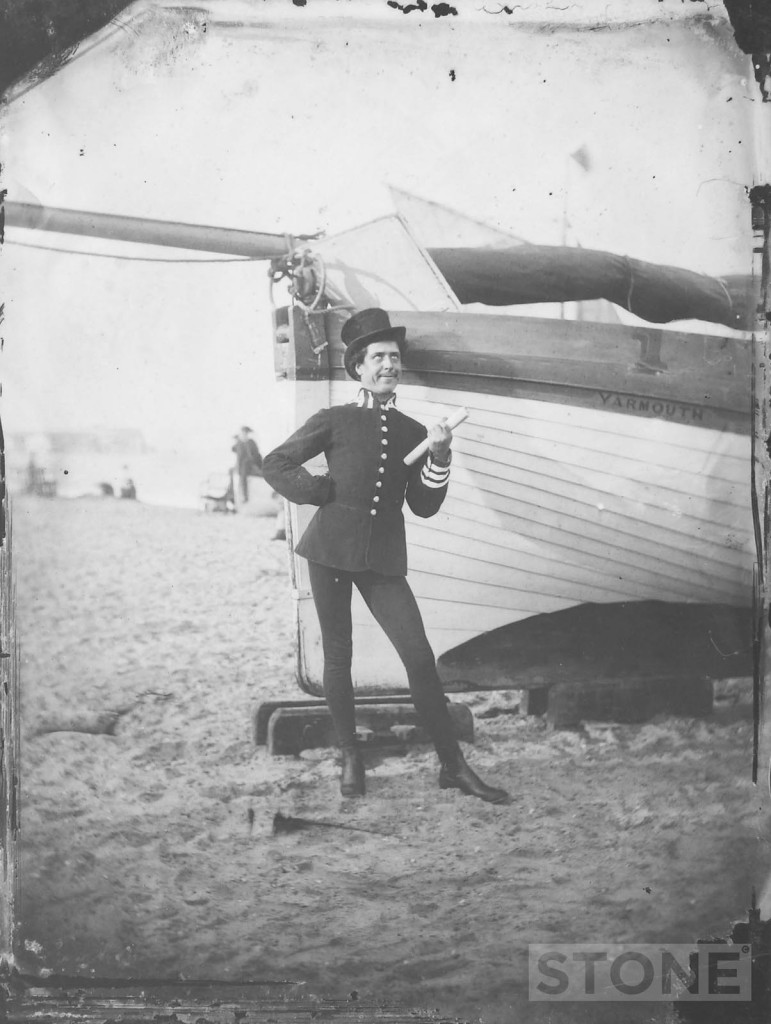 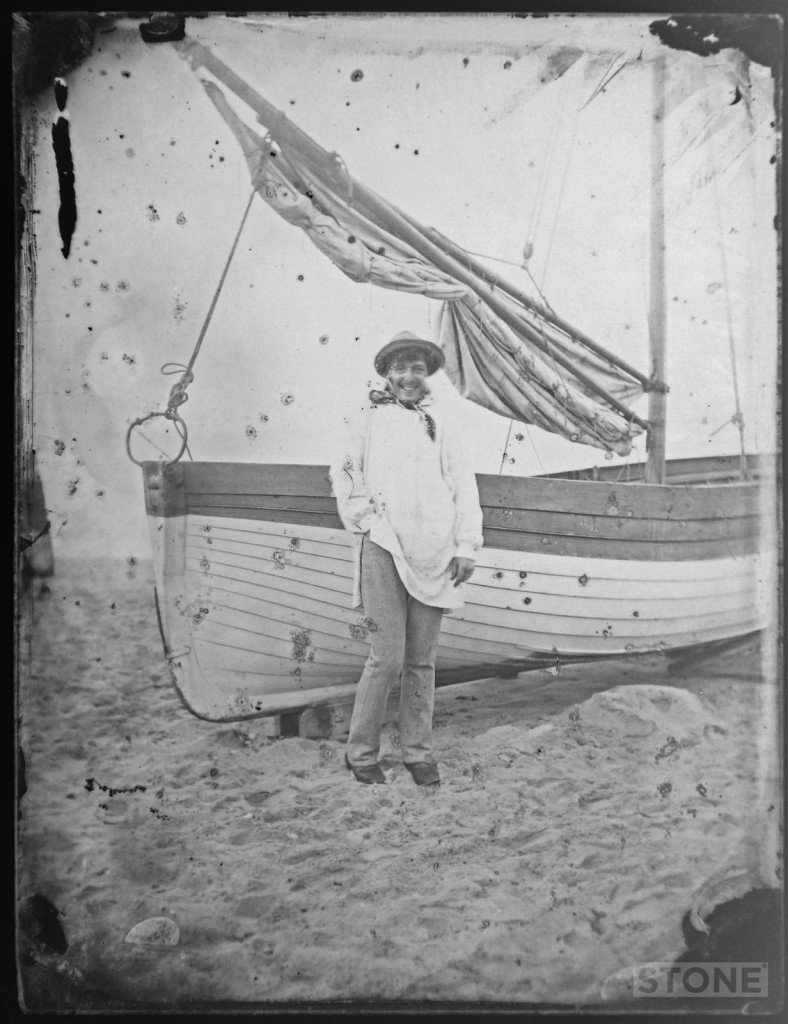 Another performer, his face is blurred by movement, he’s smiling though, something missing from a lot of photographs where you had to stand still and not move your face for at least 15 seconds. The lenses were fixed so there’s a shallow depth of field. 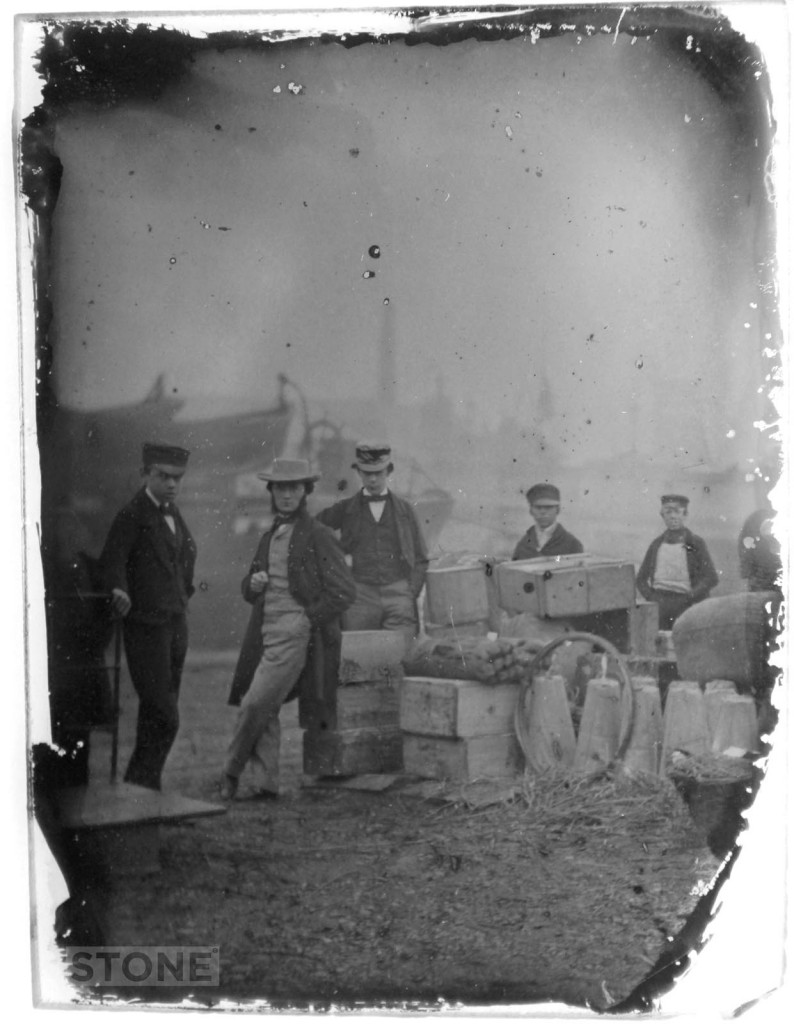 In the docks. Could be Nelson’s memorial in the background? 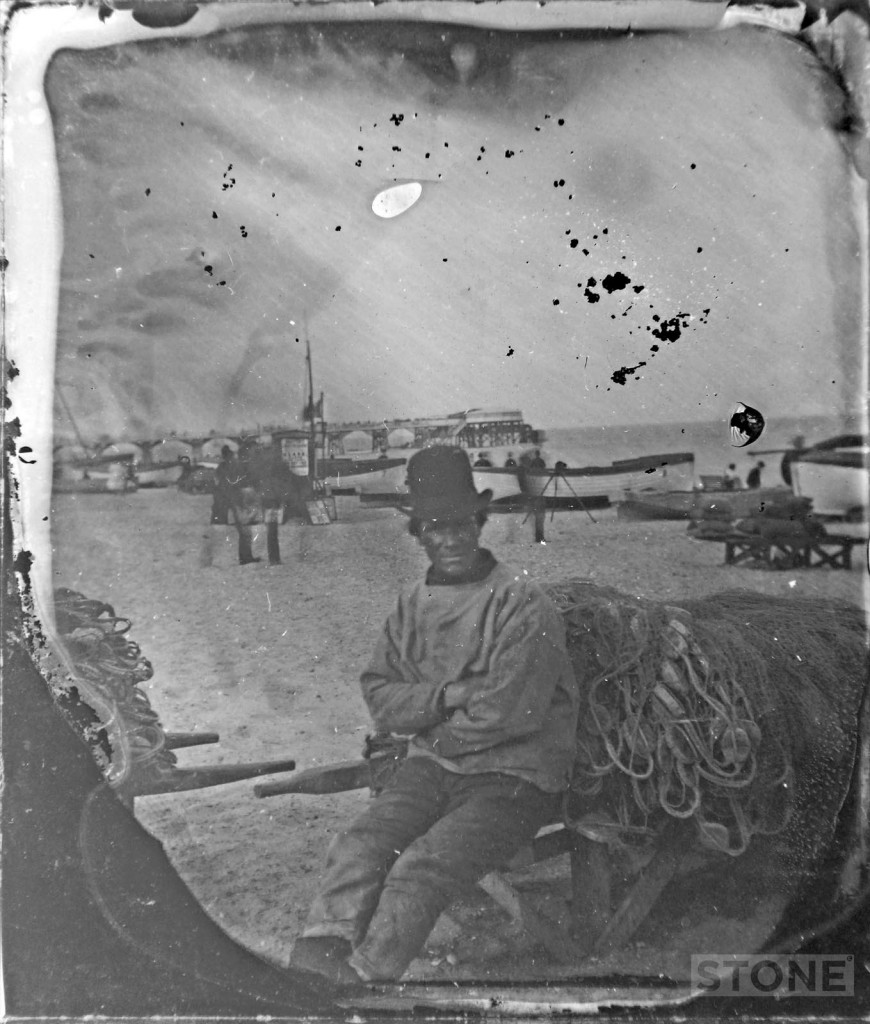 Fisherman, Pier to the rear. 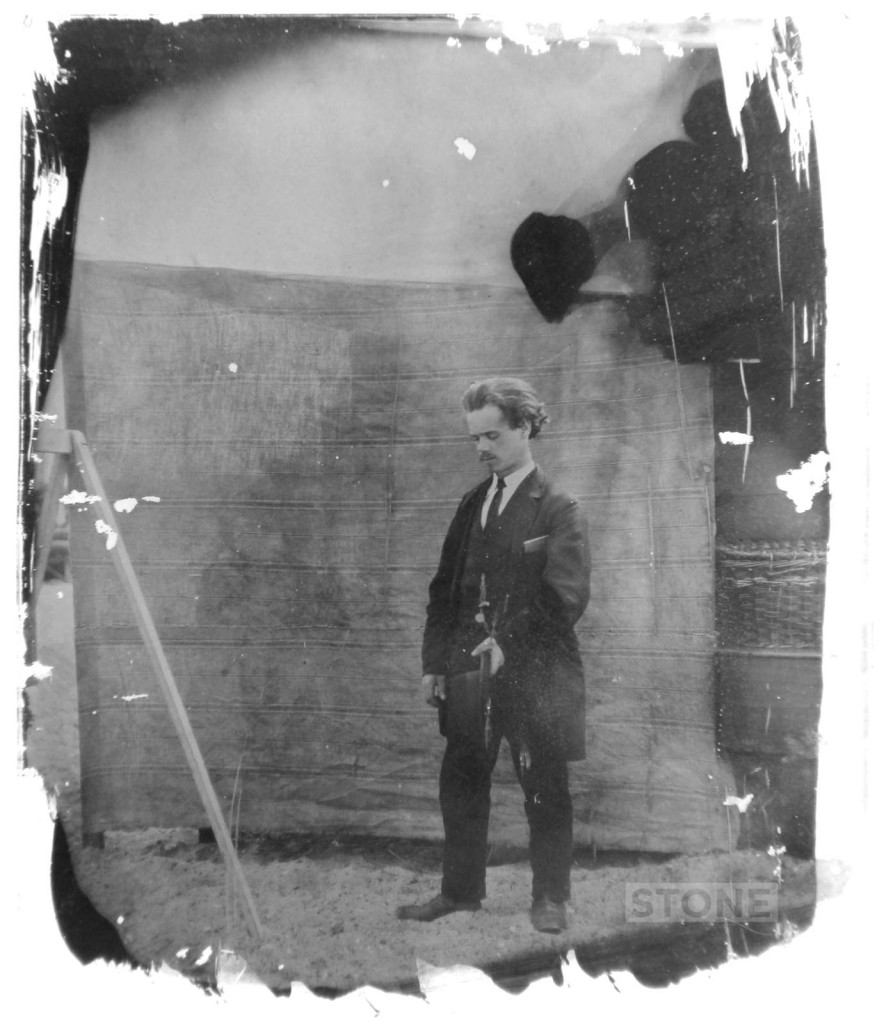 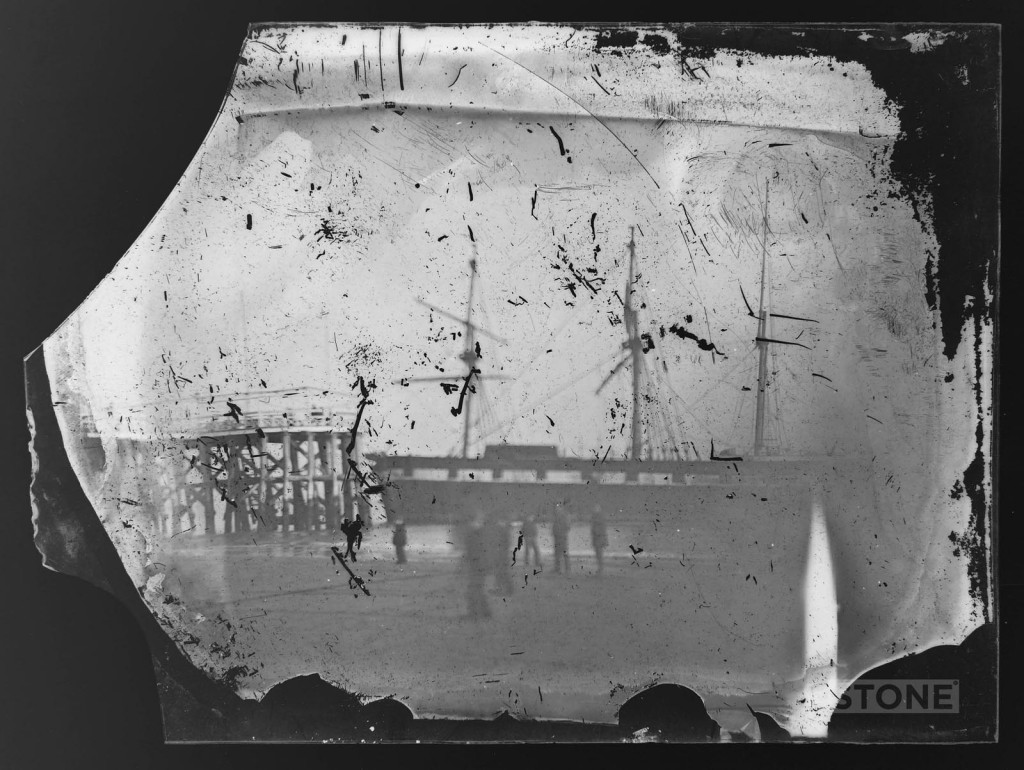 A three masted schooner, children stand in the foreground, loading jetty or pier to the left which appears to be the shallow focal plane. One of the rather badly damaged examples. 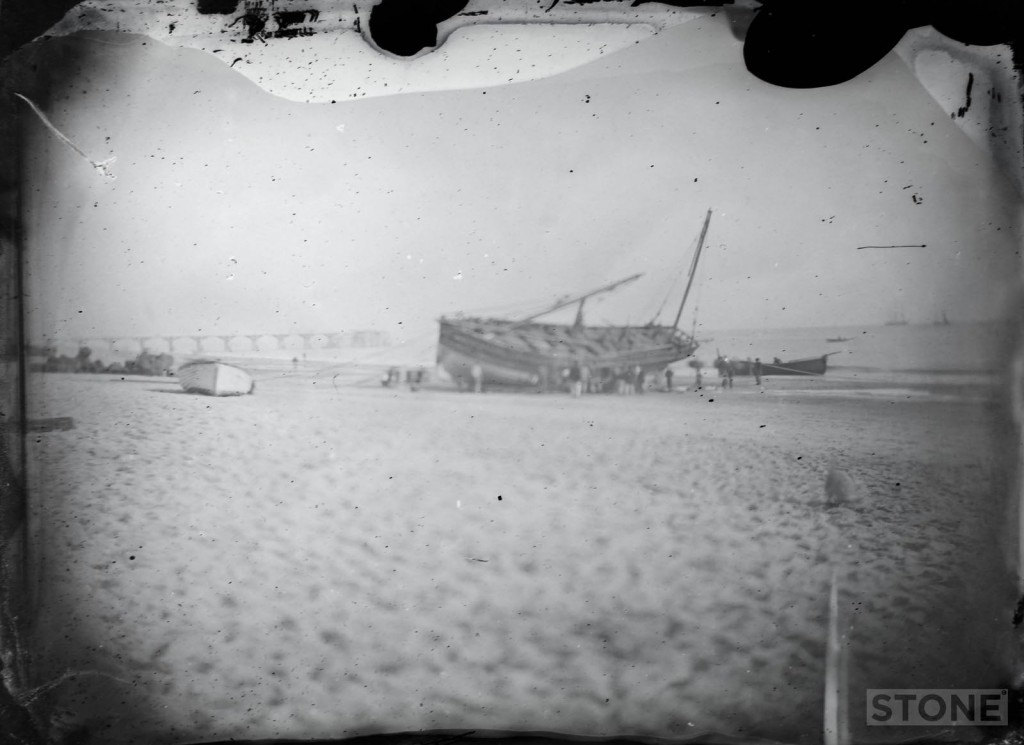 A boat laid up on the beach, numerous others bobbing about out to sea. 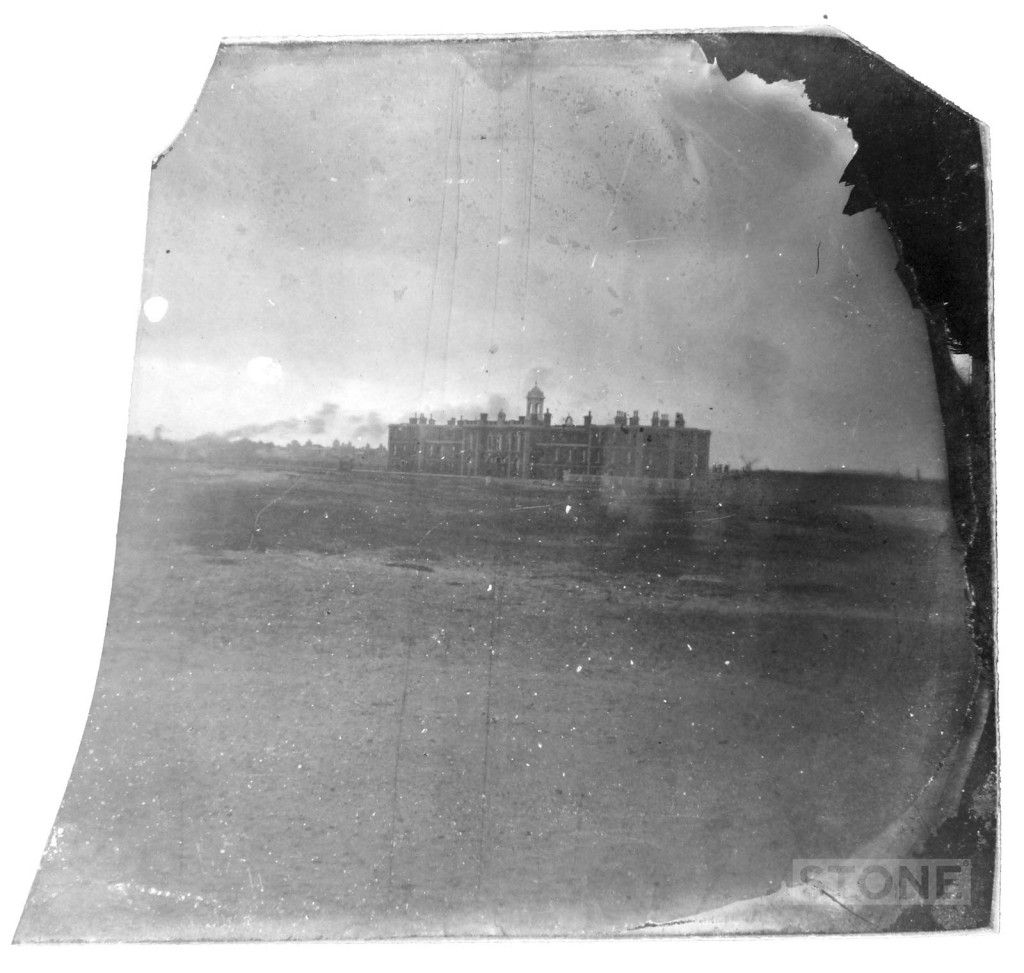 Possibly the Artillery Barracks, South Yarmouth, demolished 1920 (thanks to Gareth for the possible ID), there are two windmills visible and what looks like a steam train to the left which make it rather confusing. 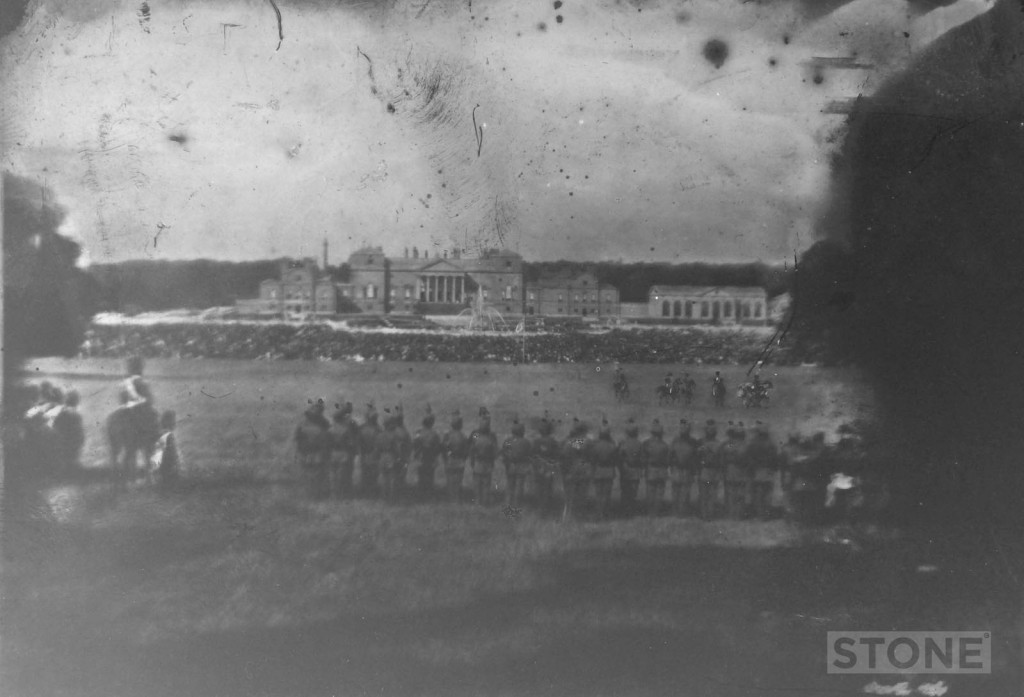 Different hall, Holkham I believe. Some kind of military manouvre going on. Horses involved. This is one of the plates that makes me wonder if this has anything to do with the Penrice family who were very involved in the military. Note viewpoint is from behind the ranks, not from the crowd. 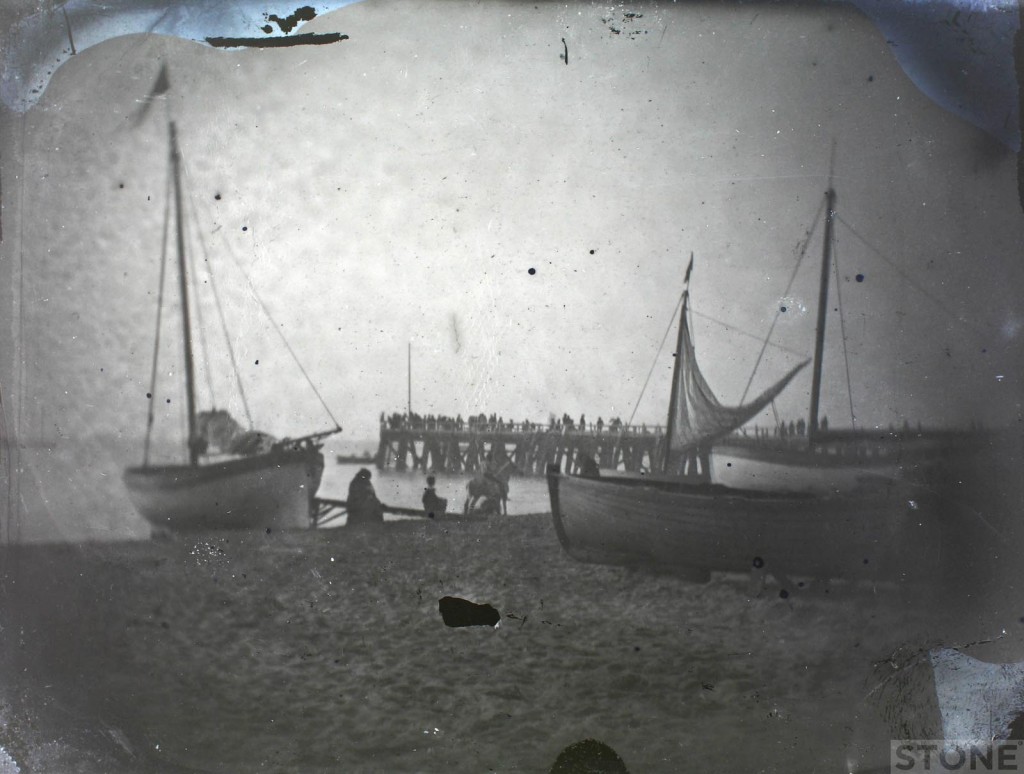 All content © Nick Stone. No reuse without permission. Special thanks to Nigel for letting me have these.