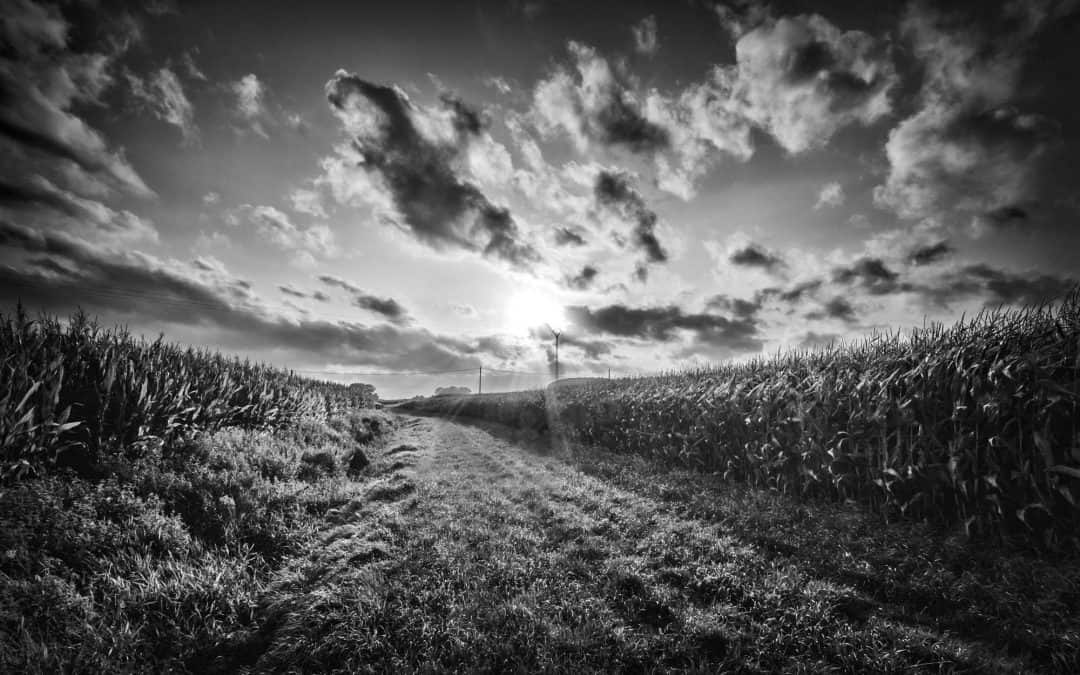 A strange day. I’ve been working very loosely on an ongoing project called ‘Vanishing Points’ for a while. I’m a bit of a fan of VPs, lots of artists are as a way of leading the eye into compositions, focussing the viewers mind. Kubrick for instance is a master of the Single Point Perspective, watch pretty much everything from The Shining right through and spot them, some clever soul has dutifully stuck them all into one YouTube video to take away any pretence of effort. So I’ve been applying a set of rules to various things and shooting them, it’s a two edged thing, because when you shoot the Western Front, these perspectives alter, a ‘Vanishing Point’ obtains another meaning. Suddenly you are surrounded by these VPs; places where people, in some cases thousands of them just ceased to exist, catastrophic end of personality, they just vanished. It’s more than a play on words, it’s a fact of the temporal and physical landscape that you are surrounded by ghosts.

I use that word hesitatingly; more than a sceptic, I don’t believe in ghosts at all. What I do believe in is the echo that history has. In a landscape where you are aware of the previous existence of a place, the people and the underlying story that a landscape holds within itself, you will imbue that place with ghosts, your own ghosts.

So I’m here in Poperinge, behind the lines, staying in a flat above a shop on Ieperstraat, a road that just shy of a century ago rung with a million boots, voices and shouts, that carried carts and supplies, artillery and ambulances to the front in the a Salient and back from it, the alive, the injured and the dead. Around twelve miles away near Poelcappelle is one very near vanishing points on a historic level; my Great Uncle Fred’s lungs were ruined nearby, removing him from the war permanently until age removed his physical presence forever in 1976, Around 8 miles away on the south side of Ypres or Ieper near Oosttaverne my Grandfather Percy James Parr, aged 37, Soldier, bricklayer and reservist, father of two, grandfather to more did actually vanish, totally, no evidence, no meat or bone, nothing to sew in a blanket and bury in a cemetery. Like so many he doesn’t have a recognised grave, his name is on the Menin Gate along with 13 other men from his battalion who all died in the same attack and vanished at the same time who equally have that strange thing ‘no known grave’.

This of course isn’t the end for them, these ghosts live on in a big virtual pile of disparate facts, they are letters and photos and memories, boxes; as yet undiscovered in attics or split from their families and floating in the digital ether on eBay, for sale with no name for a fiver, orphans in time.

I’ve researched all of them to one degree or another, trying to add detail to my own story, they vary in height, weight, age, physical characteristics and class. Some are regulars, others reservists, others drafted in. The only thing they all have vaguely in common is a random date in a rough cycle of sunrises and lunar cycles and another number based on a date that roughly alludes to the birth of a rabble-rouser  in Judea. They were associated by circumstance, coincidence and luck as we all are, and they all died within half an hour of each other by some inexplicable piece of bad luck.

What makes this strange for me is I’ve just visited the spot. I’d say pretty much exactly the spot where two companies of the 1st Battalion Royal Fusiliers launched an attack on a strongpoint where a trench called ‘Odyssey’, a lovely word redolent of adventures in the distant past crosses a beck or stream called Rosebeke, a pretty name, imagine flowers and babbling brooks. Names are of course deceptive in the extreme, more so in the extremity of the extremity that is people using a nomenclature to catalogue places they are trying to murder each other in alphabetising the structures built to prevent their own murder. A lexicon forms it codifies these places, O is for Odyssey, Oxen and Oxo. The trench no longer exists, it is a shade on an aerial photo or a few line drawings on a map, I know this now because I’ve stood where it was/is based on laying a scan on top of google map to work it out. I know exactly where it crossed the old Rosebeke which inhabits the bottom of a valley as it has done since glaciers dumped the soil over the clays it sits on. It’s pretty much a drainage ditch, a few reeds, sedges and flies. Together it existed in the past with Odyssey as something else, a fortification of sorts, a crossing point and a ‘Strongpoint’, identified as a point likely to be attacked.

We pulled up in the narrow country lane in the car, my youngest son and I walked into a canyon in the maize, it follows the line of the ersatz stream, tyre tracked and grassed, linked at this point in place at a different point in time, DNA, family myths and a jigsaw of diaries, stories and research connecting us to something in the soil. The boy dipped into the edge of the tall maturing corn, which stood taller than me, within seconds he was turning an evil shell splinter over in his hand, heavy and corroded, a jolting physical connection to 1917, to the shelling of this second and third line. He found more, a disk from a fuse, a corroded pin. Each one dragging us back there, the physical encounter still embedded in the landscape, plough turned and corroded but there. We stood and handled these bits of metal and I can tell he’s caught the virus, the time traveller is knocking about in there too. We wandered along this wide deep cut, leading away to the horizon until we stood at the point, the nexus where my family changed. Where fourteen O.R. And two officers ceased to exist as living organisms, whole families paths shifted as one, telegrams, returned odds and ends, photos and memories framed, a few disks of metal linger on.

I doubt they’re there if I’m honest. It occurred to me some time ago that the proximity of Oosttaverne Wood Cemetery* to this field with it’s volume of unknowns; at least one identified Royal Fusilier with no name, just a badge or a button giving a clue and the number of burials from the battle of Messines in June 1917. I’d like to think they’re in there, hiding under the ‘A Soldier of the Great War’ headstones. One thing I’ve realised is, I’ve probably got as close as I ever will get to Percy and the boys. The other thing I’ve realised is I think we’ve probably done our bit of whatever you want you want to call it; ‘remembrance’ or ‘commemoration’, Percy was actually just doing his job, it happened to be carrying the weight of some dusty empire on his shoulders because that’s what he was told he should do by the pig he was carrying. What makes me proud isn’t essentially him doing that, doubtless these boys had courage to face what they did, but you can’t have courage without fear, these were scared men facing oblivion, hoping it was someone else’s turn. What I’ve realised is it doesn’t matter where he is; this feisty little man who once thumped a superior and spent weeks in a cell passed something on, we all have something of him with us; my mum who only vaguely remembers him, she had a hot head, this streak, she carries him on. Her not going into service when told to and fighting to be what she wanted to be, a midwife, unheard of in the working classes of the 1930s, and she’s passed it on. Here Kid here’s a genetic baton. All we can do us remember them and pass what you have of them on. 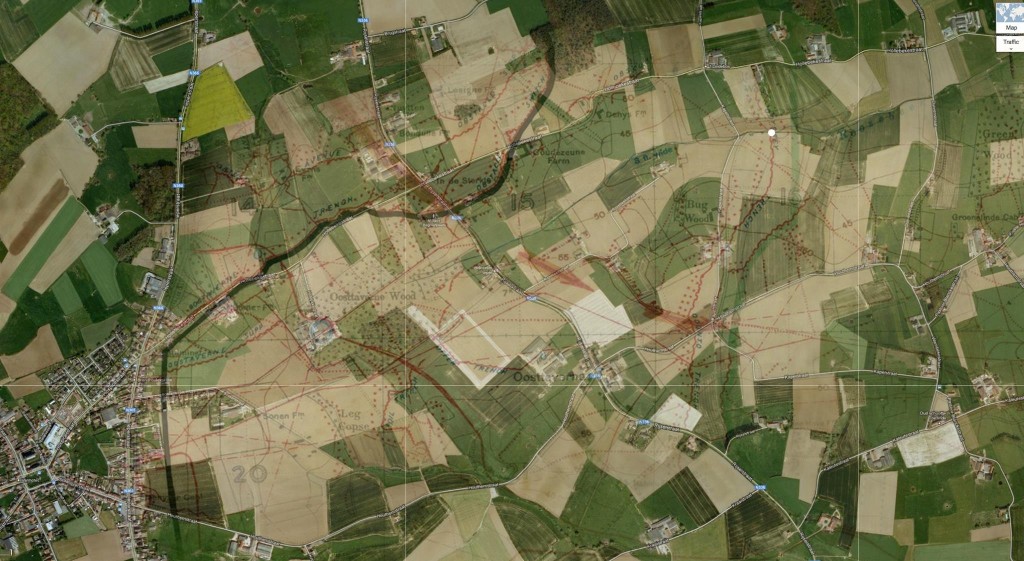 *Addenda: Since I wrote this god knows how long ago, I’ve done some more research, because the red light kept on blinking. It became apparent via a search of the lost of that day in the vicinity of Rosebeke and Odyssey, that they were in fact in all likelihood buried in a shell hole in the field. The map ref provided with the G.R.U. (Grave Registration Unit) report indicates it was a few hundred feet to the north west in the field. Only one casualty was identifiable during the searches and reburials, he was re-interred in Voormezele Enclosure 3, it would seem in all likelihood all of the officers and men found here were also reburied in the same place. And so it ends, and doesn’t because that’s the nature of these things..

If you wish to read more material on the Great War on Invisible Works, please click on Vanishing Points or Great War.

Limited and open edition prints of the exhibition are still available in the shop.

Thank you for your interest.