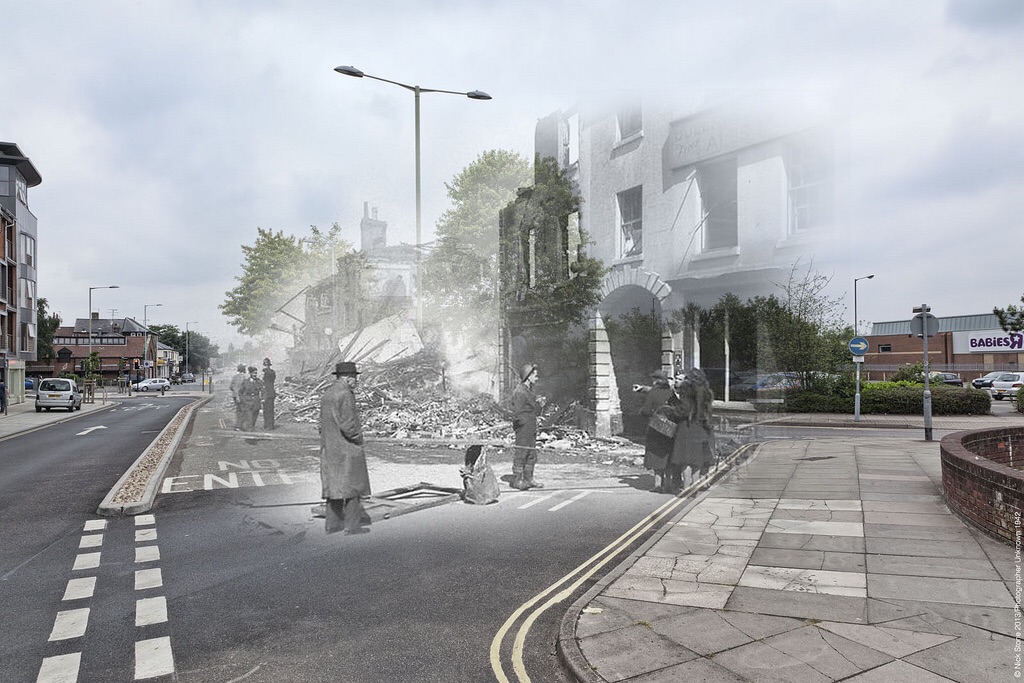 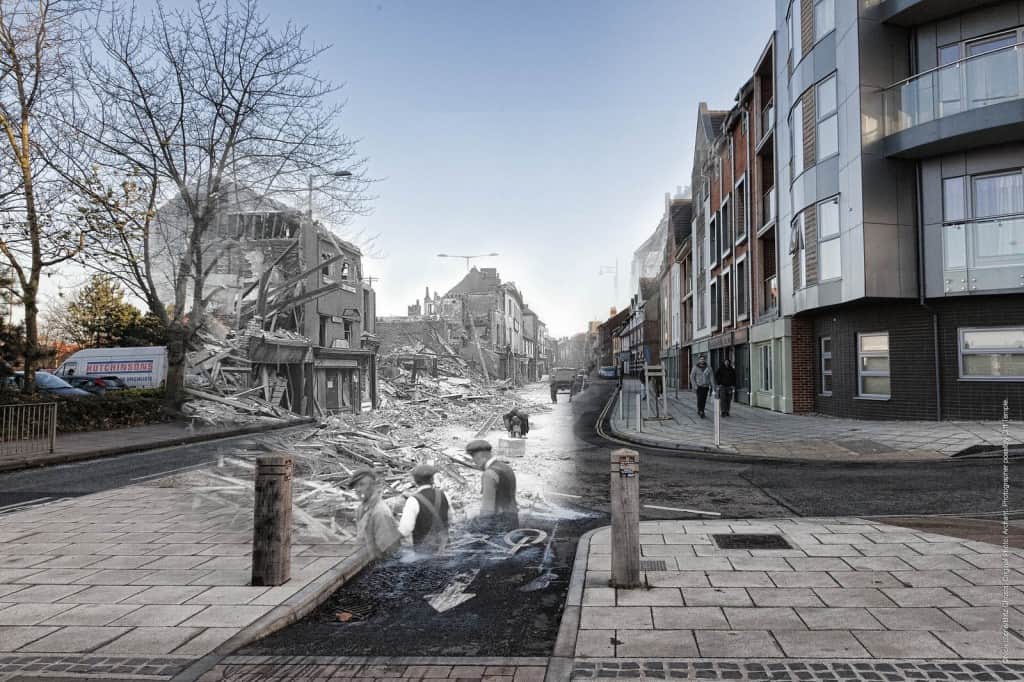 On the 28th April 1942 this was the result of a 1000kg Hermann that burst on what is now the traffic lights at the bottom of Grapes Hill. The men aren’t short, they standing in the edge of a hole that was rather wide and very deep caused by the blast a Herman was about as big as the luftwaffe generally dropped, lacking the real grunt of the heavy bombers which where a facet of the RAF and USAAF, bearing in mind the slightly surreptitious way their bombers were developed as civilian aircraft due to restrictions on rearming, still a 1000kg makes a mess whatever it’s dropped from. In addition to that you can add about half a dozen 50kg behind the shops to the left and a 500kg to the right just behind the new building where the tower of St Benedicts still stands. The land on the right was until quite recently a bank and Broadland Housing’s offices, it’s now a rather sparkly and attractive new development.

The whole of the area from the river at Halfords, formerly City Station right up to here and along Westwick Street was really, very badly damaged. The Corporation yard, Wincarnis Works The breweries and City Station all bought it. The post on the post on the right is also roughly where you can see the ghostly outline of the last remaining vestige of a C14th city wall gate, or the post at least, This was unstable and had to be removed. The council have recently improved this junction and marked out the outline of the old tower in the pavement. I like this for three reasons, I like the city wall, I like it when people remember it, and it also gave me something to work from in the foreground as well as the background thus making this easier than some to complete. One of my favourite streets in Norwich. I believe the photo is a Cliff Temple. Courtesy: EDP archive.

Next we have The Crown on St Benedicts Street There is nothing left to latch onto here as it was totally flattened and then a road (St Swithins Road) was built through where it used to stand. I had to locate this by wandering about in the street with a smartphone map based on the original street address for the pub in 1942.

I got asked if I was lost by a nice woman having a fag break outside one of the shops slightly baffled by me saying “No not exactly lost, err not as in where I am, it’s more when, I’ll go now” anyway, this was as I said The Crown, one of a small army of pubs along here that bought one on that night from the bomb bay of a Dornier (or a Junkers, but probably a Dornier). As commented on in the Joan Banger book Norwich at War which admirable covers the Norwich Blitz where I first saw this photo in the 1980s, A local sadly looks at his local, no more beer. The quality of the original is somewhat questionable on this one which is a pity.

The photo below was originally taken by Cliff Temple, Who was on leave from The RAF at the time he took this, nice homecoming treat, getting out of your Anderson Shelter on Grapes Hill and being greeted by absolute decimation. 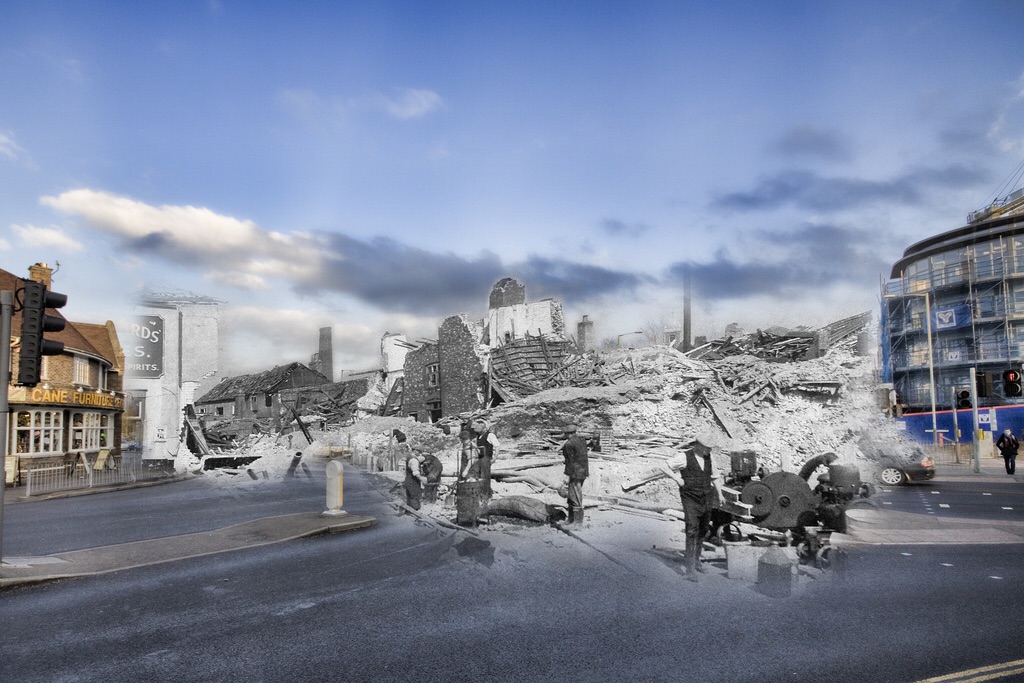 This one wasn’t easy, lens distortion causing trouble getting the foreshortening right, since I lack the ability to shoot with a longer lens through the walls of a building, which would probably have worked better, but you get the gist. Original Photo courtesy of Archant.

Looking towards Dereham Road. Again the effects of the probable 1000kg hit the on the crossroads, it turned the pub on the corner inside out, so much so in the 1980s it started selling Cane furniture instead of beer, and made a proper mess. 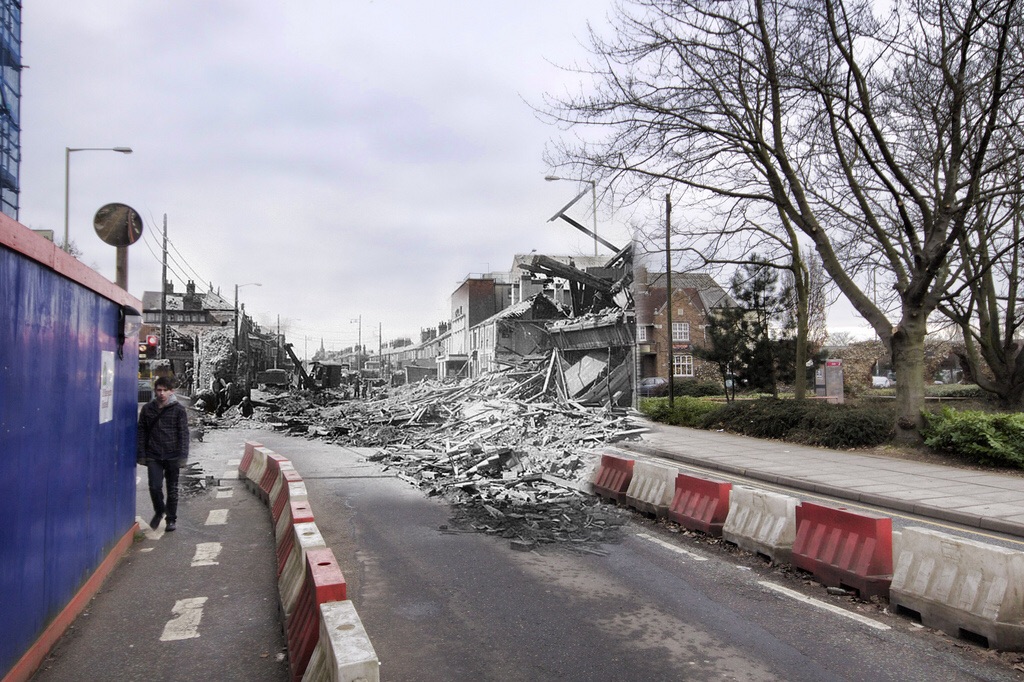 This is stepped back slightly from the previous shot St Benedict’s gate, so you can see some of the buildings on the street, The Regal cinema is hidden behind the shops on the right hand side. The girl on the left walked through 69 years without missing a heartbeat. This is another prodigious Mr George Swain photo, terribly bad scan of it though. 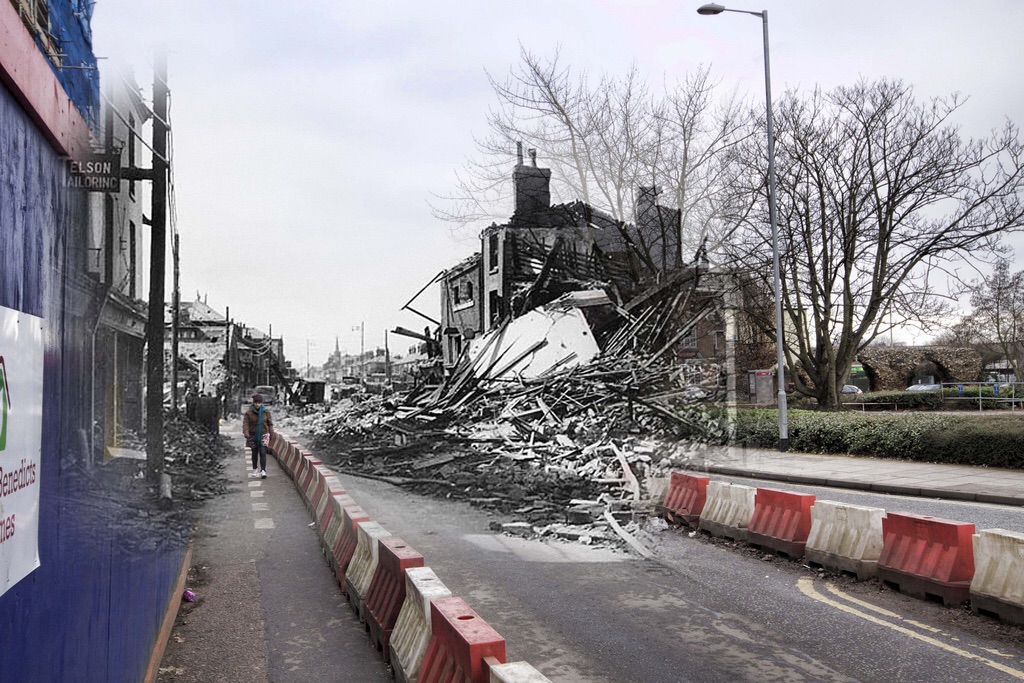