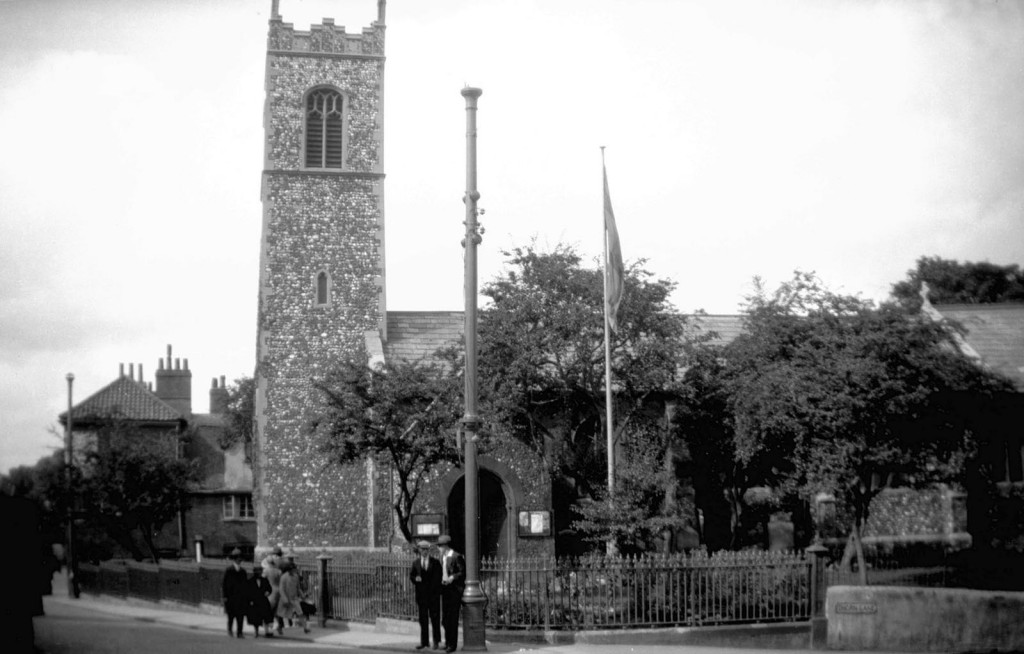 St Michael at Thorn, or it was, just behind the Archant building, sort of opposite or adjacent to the shops that survived the flame-grilling of Bonds in April 1942, this is 11 years before the bombs fell in 1931. So I’m standing roughly, within a foot or so of where George Plunkett stood, 80 years before me, it’s drizzling a bit and a cold. Then in a minute I’m…

…jumping forward about 11 years and about 10 feet to one side and it’s 1942 for a split second and then 10 years later it’s 31 July 1952 and 2011 at the same time, There’s a rickety picket fence around the church, the iron being taken away to defend us by making tanks out of it to match the spitfires made out of saucepans, and St Michael at Thorn is being demolished by some workmen, ostensibly to make way for a car park. My sources aren’t sure why it was taken down and not left like St Benedicts, church towers for no reason are quite nice things, particularly in the city on a bit of street that doesn’t have much going for it on that side where there’s a gap with some tarmac and white lines and that’s about it that weren’t here when George Plunkett took the original.

Rather bizarrely, well I thought so, as I took this photo a vicar in his dog collar was exchanging farewells with someone on the car park and getting in his car roughly where the Nave probably was. I wonder if he knew what was under his feet and all around him and on a photocopy in my hand and in my head all at the same time. There’s also a nice link between this Blitz ghost and St Julian a little way down the road, which contains the only bit of St Michael’s that has truly survived the Dorniers and/or Heinkels that particular moment in 1942. There is more information on the church available here on Simon Knott’s website.

Inside the church there was a wooden plaque and on it were the names of the war dead of the parish, one in particular would eventually stand out in my mind through the smoke. It’s difficult not to get caught in a loop.