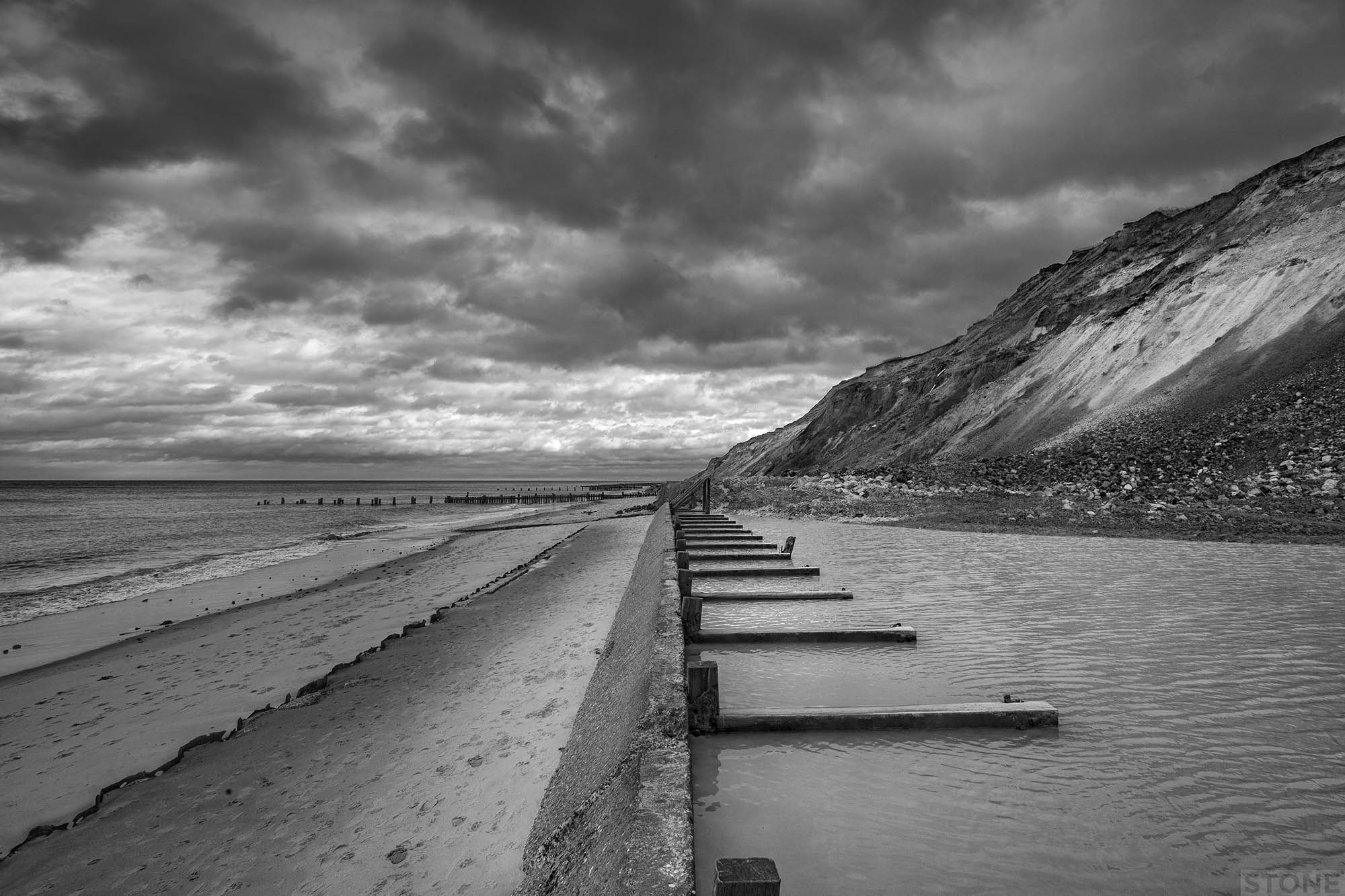 There are a few places where you can really see the dynamism of the erosion of the soft coastline. It is obvious along nearly the whole length of Norfolk and well into Suffolk, our soft glacial memory is easily eroded. Shifts can be seen in the surfaces, the revealed patterns change relatively gradually in the respites between the winter storms. The heavy northerly and easterly gales cause scours that bite at the cliffs and suck at the sands and clays pulling at the cliff, lowering the beach profiles and dumping the sand where the spits grow. The stretch from Trimingham to Sidestrand is relatively inaccessible by most standards. The high cliffs are unstable and access is by steep slips or via treacherous paths that vanish and move and are ill-advised at the best of times. 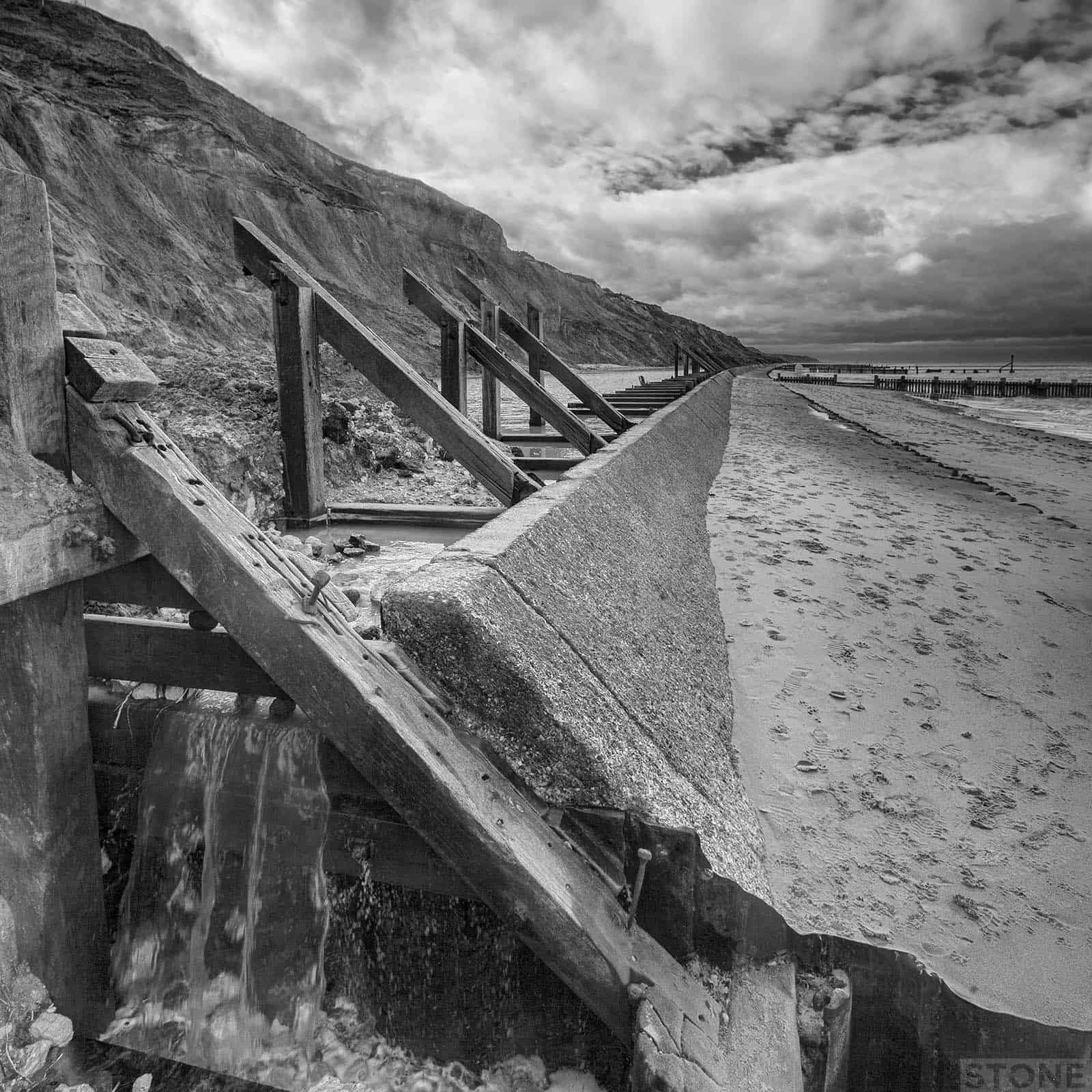 During rains the water build up in the soils and sands which can’t always drain due to the presence of clays and crag in the layers that block the waters transit down. Some of these layers are out of geological sequence due to geo-glacial movement pushing the various older sediments around, you can see large chunks of chalk above clays that post-date them. Others form features such as the glacial aged beds of Lake Trimingham, silts that were deposited over two-thousand years sit in the uppermost layers of the cliff a remnant of a large lake that sat here. You can see some of these in the dirty mixed swirls high up in the cliffs near Sidestrand. These are feature rich swirls that count off the years in their laminations, These are sandwiched between sand layers deposited by blow and run=off in the ancient tundra-like conditions of the old inter-glacials. Other layers run around chalk intrusions pushed here by the pressure of the ice. It is all a badly mixed cake, clay, sand, crag and loams, studded with paramoudra and flints, ironstone, erratics and pieces of chalk.

The problem is the clays which stop the water from draining. The cliffs become heavy with moisture, thousands of tons of wet material hanging loosely. Some of the water combines with the clay and sand and forms flows which drip down onto the beach forming fans of soft and quite dangerous quicksand and mud, sometimes this sits under a layer of washed in sand at the base of the cliff. The surface like jelly underfoot until the sea washes it away. When the water in the cliffs builds up too much, particularly if the waves have undercut the base the cliffs slump in landslides onto the beach. There were several large and fairly fresh falls between Trimingham and Sidestrand, the most impressive on is at the end of the concrete defences. It is a repeat occurrence, but there seemed to have been a fresh fall in recent weeks, one which has cut off the escape point for the water that collects behind the concrete which has in turn cut a channel of its own and is escaping slowly back to the sea via a thin cut into the mountain of debris. The pool is still being filled; water draining out of the more protected cliff behind and by any high tides that lap the top of the wall. You can see the light band of loose sands in the cliff above, the nose of the fall contains every local sediment you can imagine. 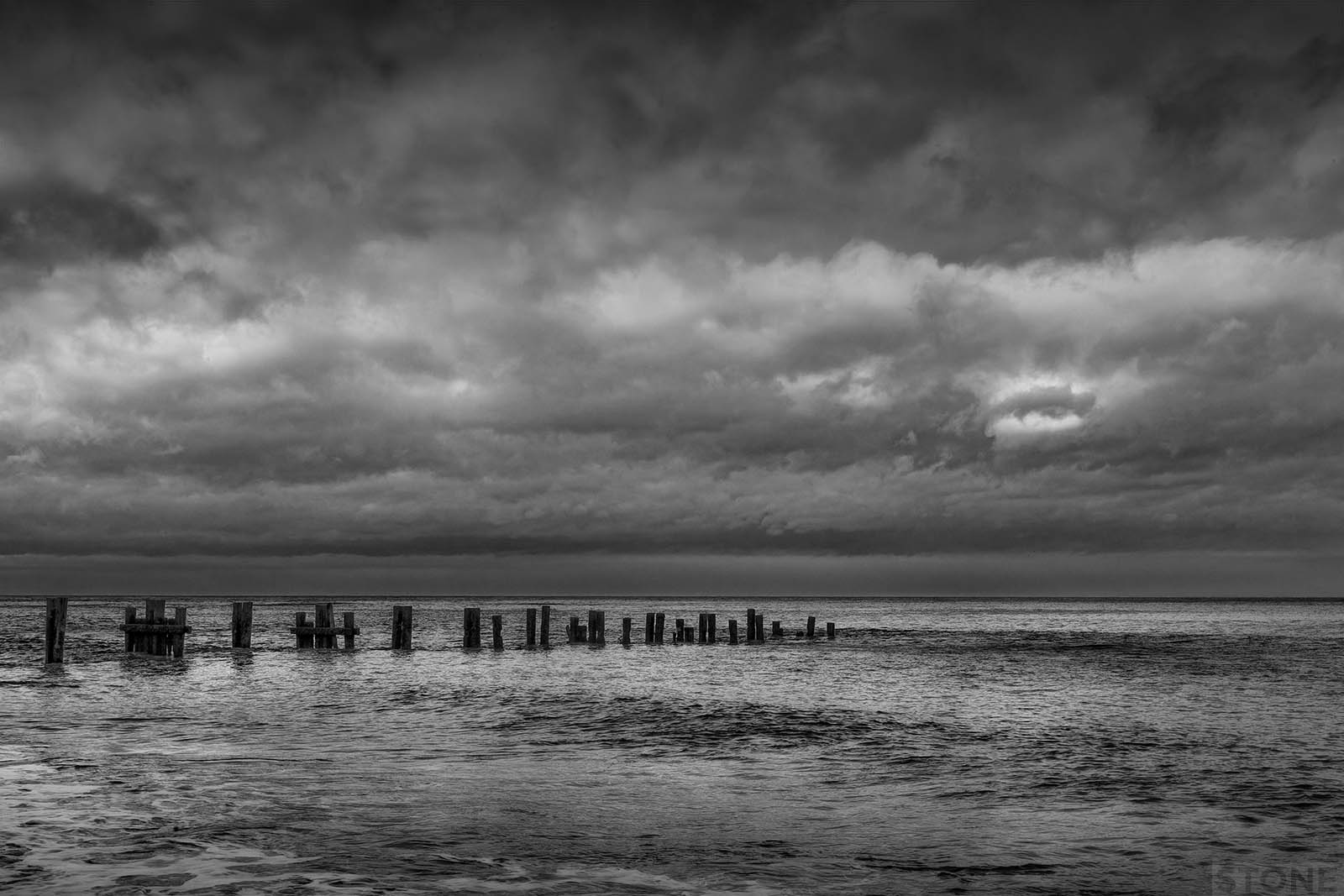 The coastal landscape echoes with names that mark many eras of human habitation, there is even a hanging thought that Walcott may be a remnant of the Celts The Cottage of the Britons. Trimingham is typically an early Saxon ~ingas or people of settlement while Overstrand and Sidestrand are both Anglo-Saxon references to the shore, the edge, the narrow-shore and the broad-shore respectively. Even with the changes to the land surface over the last thousand years and more one can see it may well have been a difficult, an inaccessible place all those years ago. It is an area that contains finds that in a similar way to Happisburgh date back from recent history, through the Medieval to the Neolithic and back to the Palaeolithic, finds that sit in our sequence alongside the remains of Second World War concrete gunnery points which have been slowly making there way down the more solid cliffs you can see grassed and reasonably stable towards the slip at Trimingham, that crooked pathway back up to the surface at the end of the slow walk, watching the tide return to feed again on the land.