‘There is a rumour that…’ is a phrase that appears a lot in relation to the genesis of the spectral hound Conan Doyle’s The Hound of the Baskervilles and the Black dog within. A variety of locations lay some claim to the hound, not least those used in the setting for it on Dartmoor. And the legend of squire Cabell a local buried at Buckfastleigh church near Buckfast Abbey is woven into the fabric of that, so much so that the folklore and fiction and fiction and folklore are almost impossible to untangle. Cabell is said to have been a rather unpleasant and immoral character, famed for his hunting. Not just of beasts but of maidens. He is alleged to have sold his soul to the devil. According to verse murdered his wife and was attacked by her dog which tore out his throat. There are many variations on the story and this is one of the places where a good story falls apart as she outlived him by 14 years. It is said when he died/was dying that a pack of phantom hounds assembled at his tomb/manor, and of course do so on the anniversary as you’d expect. Doyle liked a fairytale, you need to look no further than the Cottingley and his other work with spirit photographs and spiritualism after the death of his brother and son in the Great War to work this out.

It is very much like the appropriation of a local Wild Hunt tale, the Wisht Hounds or the reasonably local Yeth Hound; a single dog type. This happens frequently; Woden, Cernunnos or Annwn are often replaced by a known historic, infamous or other figures from more recent history or folklore and carry on leading the pack, there’s even links to Southern European stories of witches and interpretations that link directly to Yule celebrations with flying reindeer. You can see this transferrence with Comte Arnau in Spain, Hereward the Wake in Peterborough, Bèrndeken van Geulen in Germany, even Jan Tregeagle nearby and various others places and figures. It is entirely possible that Doyle has picked threads from this tapestry and used them to construct the character of Hugo Baskeville and set the story at Grimpen Mire which may well be Fox Tore Mire in the landscape we inhabit.

Where it starts to get confusing is Baskeville Hall exists and it’s not here. It is situated near Hay on Wye on the borders between Wales and England; a nineteenth century hall built by Thomas Mynors Baskerville. Doyle was a friend of the family and stayed at the house, which sits near the Herghest Ridge and Offa’s Dyke, a site that has associations with it’s own singular black dog The hound of Black Vaughan a fifteenth century lord and his dog said to haunt the ridge, which again is probably a Shuck like borrowing of something earlier now lost into this tale. The area also features two places names Mortimer and Stapledon, both characters in the Doyle story. It is alleged that due to his friendship with the family Doyle decided to set the story elsewhere, so back to Dartmoor.

There are more threads still though. An author or writer hunting a story will follow certain trains of thought, become obsessed by an idea and try and formulate around it. There is no doubt the black dog was firmly in his mind as he assembled the building blocks. In 1901 Conan Doyle had just returned from South Africa. He was suffering from enteric fever and went to Cromer to recuperate. They stayed at the Links Hotel, playing golf with his friend the journalist Bertram Fletcher Robinson. During their stay had dinner with the Cabbell family who owned Cromer Hall. They may well have told him about their ancestor Squire Cabell of Buckfastleigh, the wife murderer with his hell hounds. They would almost certainly have also then exchanged stories of spectral dogs. 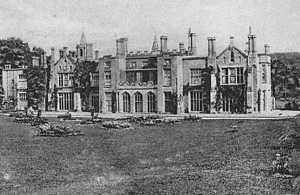 If you are at the tea table in Norfolk and the conversation drifts onto Black Dogs you would end up realising what territory you are in. The grounds of the hall have an associated story against the gothic backdrop of the house and the Yew trees. The locality is full to the brim with tales of Black Shuck and Old Shook, particularly along the songlines of the North and East Norfolk Coast where they would have been staying, chatting over a round of golf. Curiously later the scene of the Sex Pistols Christmas Eve gig in 1977, shortly before the hotel burnt down. It is said the hall in the book is very reminiscent of Cromer Hall. There is also a further story that the coachman of the carriage that drove Doyle to Cromer Hall had the name Baskerville, who Conan Doyle sent a book to later with an apology for misappropriating his name, there may be a wistful falseness to this, it smells of rumour, but there were Baskervilles living in Wells at the time a cursory search reveals.

The literary connection in Norfolk does not end with Conan Doyle, Christopher Marlowe encounters Shuck a few miles away at Stiffkey and recorded it in People and Places in Marshland, and even Ian McEwan and his Black dogs novel, McEwan lived in the middle of Shuck territory when he was working at the UEA. It is a fertile ground for re-imagining the Black Dog. One from where Baskerville had threads drawn along with Dartmoor and the Welsh Borders.