Langemark is I feel one of the most desolate corners of the Western front. As I mentioned in another piece on Vladslo there is something so desperately bleak and sad about German cemeteries. They don’t lack in any of the respectfulness of the loss or the death or the sacrifice or whatever you want to call whatever it was which happened that drew millions of humans to try and murder one another at the behest of their heads of state. It is what it is. A piece of land full of the dead, borne of Germanic soil and laid waste in Flanders. This place is also known as Der Studentenfriedhof, It is estimated that 3,000 of those buried here were students who died in an abortive attack on the British and French lines in 1914.

Like so many of these places the memory isn’t just in the stones and names, it’s sticking up through the ground. There are the omnipresent bunkers that made up and still do in some senses make up the line. The site itself is shaded and has the feel of a fortress about it, like you are entering an ancient village. There is a dampness, a mossy feel, the area partially ringed as it is by water, protected by it from the Flemish life that goes on, separated from a Germanic sister tongue by weeded up waters, the tractors and maize and barley grow over there. Not here in the shadows, the carpet of acorns and the rows and rows of black stepping stones.

From the car park you walk down a tunnel to reach the path, dark and enclosed the faint sounds of battle from a flickering display. Along a path that runs to the entrance houses an annex. There is no Portland stone, no Macdonald Gill and his Trajen style Roman typefaces. The rooms are lined with wood, the type cut in is neat and steady, Teutonic. A perfectly formed Sans Serif, almost Futura. It feels like Paul Renner and Bauer had a hand in it’s tooling as the world glanced forward at the Bauhaus.

The lists of names are endless. The dead the missing boys and men of Bayern, Westphalia, Saxony and on and on. They are stacked neatly like an index, floor to ceiling 16,000 of them, a carved map of the dead. Through the entrance way lies the massive blocks of near black stone that stand central to the cemetery. They mark Kameraden Grab The Comrade’s Grave that contains the 24,000 men including German fighter ace Werner Voss and two British soldiers who were reburied here, their remains indistinguishable in death from their foe.

From behind in the line of the hedge peers Emil Krieger’s mourning soldiers, standing guard over the site since 1956, their faces perpetually clouded and indistinct, still grieving their comrades. There are close to 25,000 unknown here more than half of the total which stands at 44,234 according to Volksbund Deutsche Kriegsgräberfürsorge. They gradually filed here from burials all over this part of Flanders, a concentration of death.

If you choose to search for period photos of Langemark, you will quickly become aware Hitler visited here during the Second World War. He stood here near the bunkers in a forest of raised arms amongst the dead, whose names are listed in a typeface that echoed the expansive freedom he wished to crush. 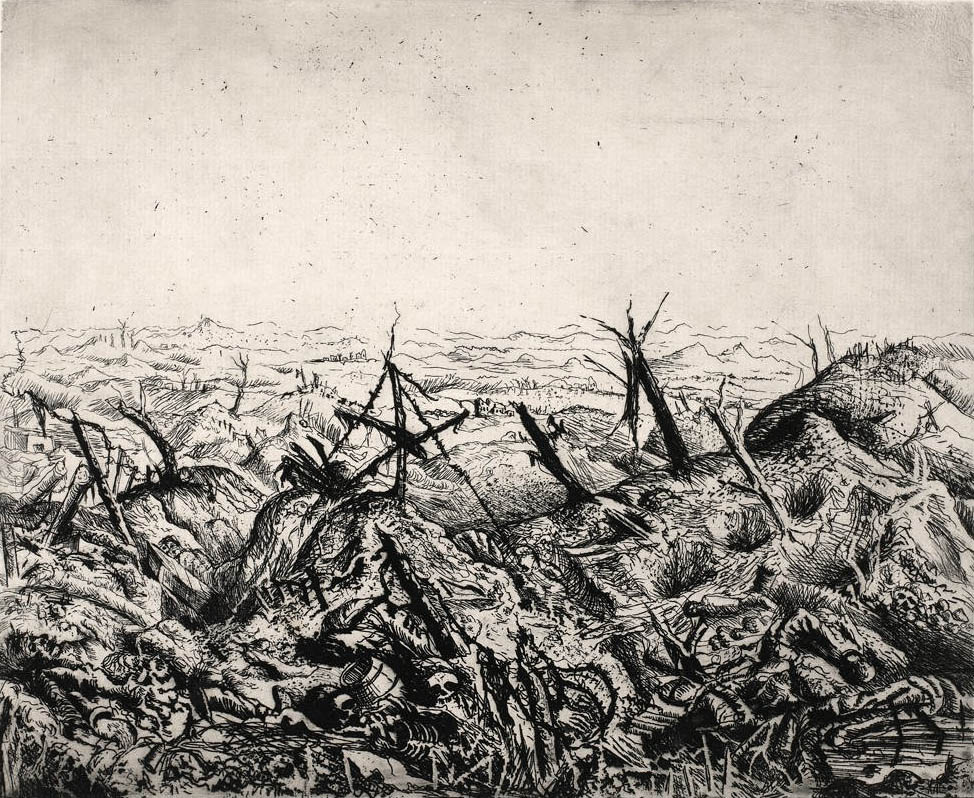 Bottom two images are Langemark/Langemarck during the Great War (photographer unknown) and Langemark in 1918 by Otto Dix.