I recently rediscovered this. It was something I’d put on Flickr. It is the tale of another family member and his last few days and hours in the Great War. We visited the panel he is remembered on at Tyne Cot a couple of years ago. He was my grandmother Jesse Parr’s (Née Northrop later Ireton) Cousin born in Cambridge in 1897 and lived near Mill Road cemetery not far from where she lived, and some of his ancestors place of rest. Not too distant either from the streets of back to back terraces where his and Jesse’s parents played in the back streets off Regent Street. His father was a Chimney Sweep, originally coming into the town from the older settlement of Grantchester, his mother, Jane Kitchener was London born, somewhere in Bayswater. She kept house and looked after him and his sibling. By the time Sid went to war his father George had died and Jane had remarried Charles Micklewright and were living with his younger brother Isaac in Willow Walk near what is now the Grafton Centre.

Sidney joined the 1st Camridgeshires (8th Suffolk Regiment). And went to war, no records exist of his service, lost in the blitz presumably along with hundreds of thousands of other clues and pieces of lives.

He was killed on the 12th October 1917 on the attack of Poelcapelle near the Brewery. It was apparently a bad day, that Flanders mud. the hot metal flung about amidst the movements of the men hunkered down in the brown and battered landscape. He’s not far from My Grandad Percy Parr either, maybe 3 miles of advance over 3 months for two men from Cambridge both lost in the earth there. Family together and apart.

The only facets that remain are a record of the two pounds, twelve shillings and fourpence he had left in pay and his war gratuity of eight pounds ten and of course his is a name on an alphabetical list on a wall in Belgium where the land rises up below Passchendaele church and the beet leaves sway in the wind. 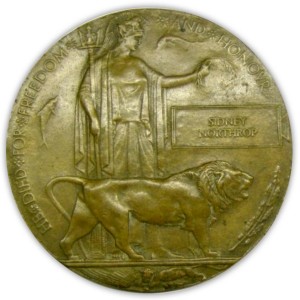 In a curious piece of synchronicity I found a digital relic of the sale of his Dead Man’s Penny on eBay. I contacted the buyer just out of curiosity, was he a collector, would he maybe sell me the penny, a long shot, I didn’t ask in the end.  the buyer was Johan de Jonghe a man who works as a museum guide at Passchendaele and Tyne Cot and has Sid’s Dead man’s Penny, he collects them, the remnants of the lost boys on the walls and in the cemetery. Sid is well remembered it turns out and is in the best place. He kindly sent me a photo of the penny, along with his research from the War diaries:

His MIC (Medal Index Card) shows that he was part of a second unit : the 1st Cambridgeshire regiment (part of the Suffolks), service number 4406 (and 8th Suffolk regiment Service number 326738). He was part of the 18th eastern Division, 53rd brigade. He was killed on the 12th October 1917 on the attack of Poelcapelle near Brewery. He was entitled to the British war Medal & the Victory medal.

I don’t know where they are.

Here a few lines out of the war diary :

8th Suff.R.moved up by FRANCOIS FARM and PHEASANT FARM to about ROSE TRENCH.during the move forward there was considerable gas shelling,but there were no casualtys.
It began to rain at 18.30 a.m.,and this continued steadily till 4 a.m.

The ground was consequently very wet and heavy,and cover in shell holes difficult to obtain.
The battalion was assembled by 3.15 a.m.

At 6.25 a.m. no news of the progress of the attack had been received at H.Q. 8th Suff.R.,and therefore the O.C.8th Suff.R. determined to move the battalion forward as arranged,except that on account of the heavy barrage in V.19.d.,the whole battalion was to move North of Poelcapelle,instead of the Right Assaulting Coy. moving to the south as had originally been intended.

During the move up to Langemack-Poelcapelle road,the battalion had to pas through a light barrage,but the majority of the hostile fire was about the Dixmude road.

No definitive information of the situation could been obtained at H.Q. 7th R.West Kents R.,but it  was believed that the left had reached its objective,and that the right was held up in front of the Brewery.

Right of the Bn skirting the houses N.W. of the village,and the left on the track from V.19.a.3.3.-Requette farm.

On reaching the Dixmude road, the Bn came under heavy rifle and MG fire directed from about Helles House,and was forced to deploy.

The right Coy (B Coy) observed that most of the fire that was holding it up ,came from a pill-box about V.14.c.15.10,and the houses south of it. In order to deal with this,Captain H.A.Williams ordered 1 platoon to work round the rightflank through the village,1 platoon to cover the attack by the fire from the front,and a 3rd platoon to move round the left flank.

The right platoon could not get beyond the houses owing to rifle fire at short range.
The Coy Sergt.Major was killed here amongst other casualties.the other 2 platoons were held up on the lines V.20.a.10.91-V.13.d.95.10

The centre Coy (A-coy) advanced in extended order from the Dixmude road,and met no troops of the 55th Brigade while advancing,and finally filled up the gap which had occurred on the line V.19.b.9.5.-V.13.d.8.4.
A few Kings Own  ( R.Lancashires) Rgt and Rifle Brigade of the 4th Division on our left were met about V.13.d.8.3.

An attempt to push forward the left flank of the Coy. proved too costly,and the consolidation of the ground gained was commenced.

The left Coy. (D-Coy) had very heavy casualties in pushing forward from the Dixmude road, and found no troops of the 55th Inf.Brigade on its front.
The line V.13.d.9.3-V.14.0.00.45. was reached,and touch gained with the battalion on the left.

The reserve coy moved up to just N.E. of the Dixmude road,and remained there all day and suffered considerable casualties from shell fire.

A reconnaissance at 10 a.m. by Major G.L.M.Fache MC,2nd in command,found that the right coy had attempted to push through the village,but had been held up on the line V.19.d.9.9.-V.19.b.8.4. ,and that there were detachments of  6th R.Berks.R. behind the lines.

At 11a.m. considerable movement of enemy troops was observed about Helles House, and this was dealt with by snipers with good results.

About noon the counter-attack developed against the junction on the left, and the 4th Div., 2nd Lanc. Fus. well handled by 2nd Lt Jordan,together with rifle fire from A & D Coys. beat off this attack,while very accurate shooting by rifle fire grenade sections under L/Cpl Youngman assisted to inflict considerable casualties on the enemy.

The Battalion suffered very heavy casualties during thus attack, which was accompanied by heavy shelling and MG fire from V.14.c.2.2.

The shelling continued to be severe throughout the afternoon,and casualties were numerous.
it became almost intense soon after 3 pm.,and at 5.45 pm. another local counter-attack along the hedge and ditch about V.14.c.1.0. developed. This was beaten off by Lewis Gunners,rifle and MG fire.

The ground was very wet end it was impossible to dig or to remain in one shell hole for any length of time.