Dogs lead sometimes, our is beige, stinks, is opinionated and prefers woods to beaches, muck and leaf mould to sand and pebbles. There’s more to sniff and mark an roll in in woods and fox shit beats dead gull hands down in the scent masking stakes for some inexplicable dog reason. So we’re his pack and despite being about 5ft 2 inches taller than him and weighing conservatively I’d guess about 15 times more than he does and owning the lead, he tends to have a say about where we are when he’s on the other end of it sometimes. Luckily for him I don’t mind trees although I prefer cliffs and sand and things. Anyway, he decided by proxy of my wife that we’d go to Blickling, again.

I’ve looked at Blickling a lot over the last ever since we moved to Norfolk in 1968. It is mercifully one of those places that keeps on giving bits of itself, the hall, Fastolf and the Boleyn family and the Hobarts and their funky pyramid who had roots like honey fungus through Norfolk for centuries. There’s a couple of thousand years of known human occupation here beneath the landscapes and grass. I fished here as a kid a few times, and later as an adult went out in the snow with a friend searching for rumoured double figured pike, we found none and nearly froze to death.

There is of course an airfield nearby, RAF Oulton. A satellite airfield of RAF Horsham St Faith and then RAF Swanton Morley.  It flew a mix of Blenheims and Hudsons, Beaufighters and Bostons and latterly Flying Fortresses and Liberators as 803 Bomb Squadron. There’s a small museum in the hall that remembers the days when the place was used as accommodation for air crew. It’s not a bad museum, I’ve been in a couple of times and read all the things on the walls, looked at the models and the ephemera.

We walked in a circle, starting near the car park under a lid of cloud, the sun trying to burn a hole. The Hall and pub were bristling with local tourists like ourselves, booming men in Barbours, women with Jack Russells and Spaniels, and ice cream edged children looping and swooping. The lake is quietest, so we scouted the edge past the swims cut into the reed edges where the warden comes and takes your money, and up onto the dam wall that cuts off the stream and makes the lake a lake. Beyond this is a copse on a slope, the dog is happy marking trees, we wander in yellowing autumn light towards a gate between some more mature beech tree and a vista opens up. The hall sitting between the trunks. It is that perfect light you only get in late afternoon in autumn, filtered and refracted by the thicker layered atmosphere, shining through leaves as they give up their yellow and start to brown ready to fall the sun breaks through and the air is the colour of treacle. 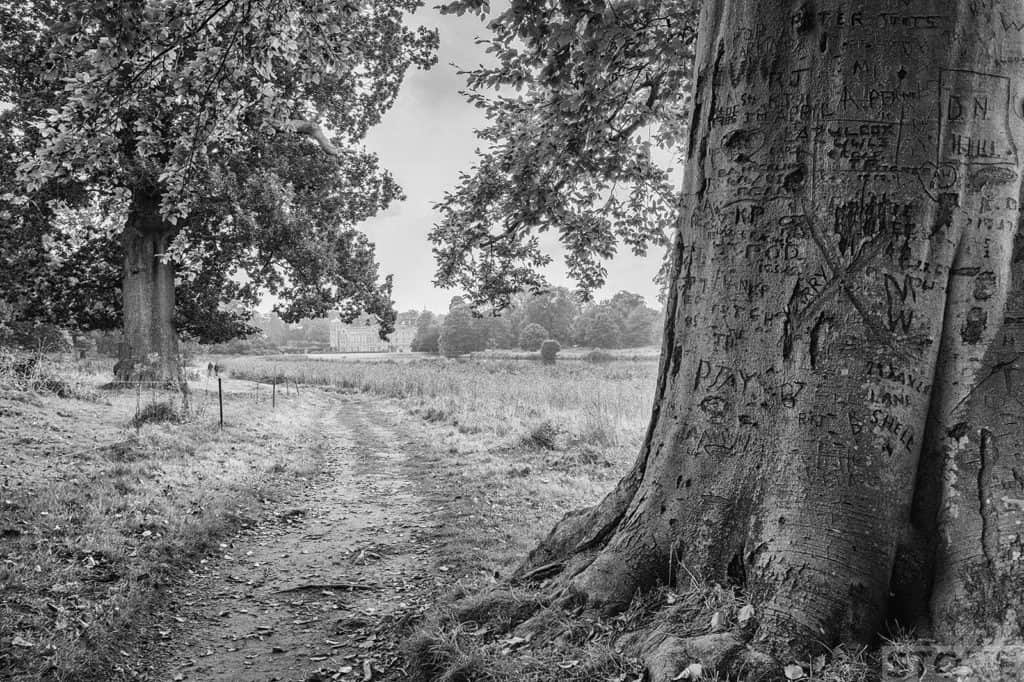 I don’t actually spot the interesting bit, because sometimes you get caught in a moment, Jen points at the trunk of the beech. This is a museum, on the stretched bark of the trunk are hundreds of pieces of graffiti: Arborglyphs. They fill the tree to head height thinning as they rise. there are initials and dates. They go back over a hundred years and some appear to be new. and here and there in the layering of hundreds of people leaving a mark, are names and dates that were clearly left here by crew during the war. It’s fascinating, the older ones scabbed and stretched by the growth of the tree, spreading and almost unreadable, newer ones still deep and bright. There are trees like this where near the house I grew up, my name scratched into them this way. Making our mark, being remembered. the dog cocks his leg on against the trunk. 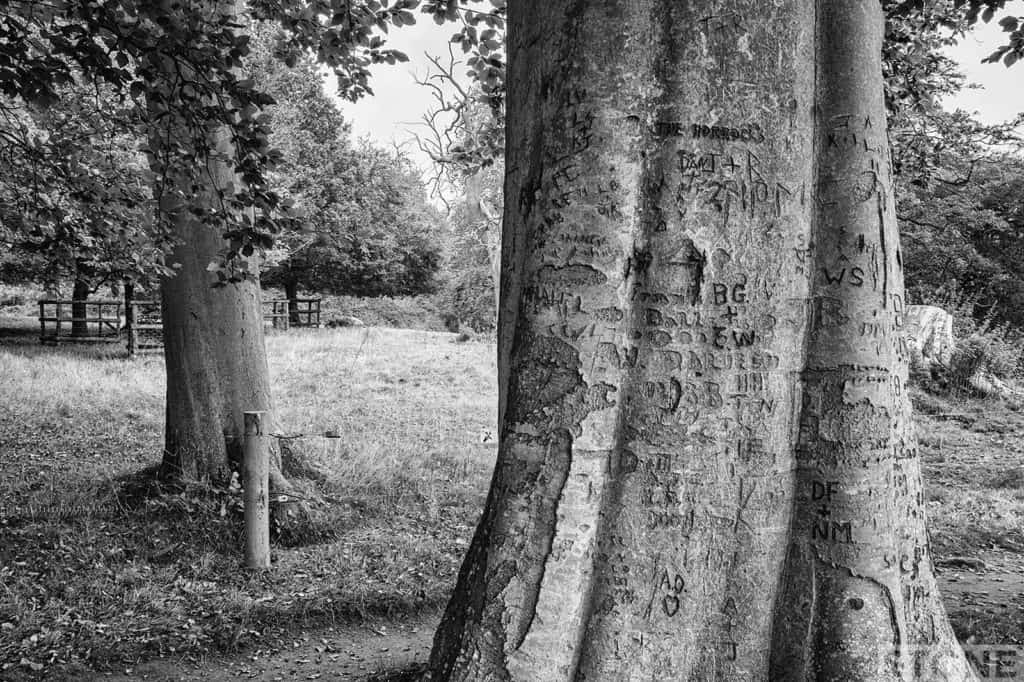 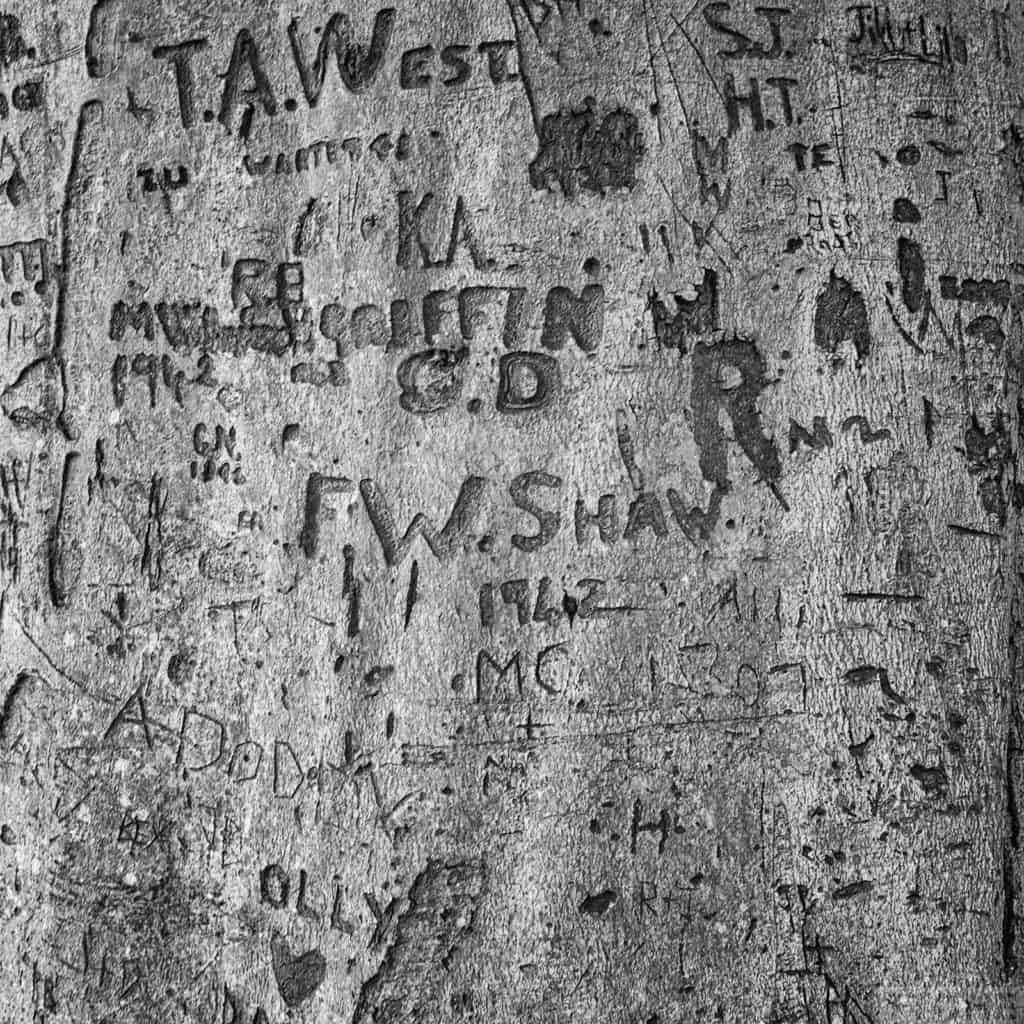