Lost in a landscape: Booton

There’s things you round a corner and don’t really expect to see in the corner of a field, ostriches for instance, rare but not unlikely, elephants, I’ve seen photos of elephants in Norfolk fields. Booton has a really staggeringly odd, stamp-on-your-brakes sort of church stuck in a field just up a hill from the village. St Michael the Archangel and All Saints. It looks more like a minster than a parish church, and in the afternoon’s dying light as you head downhill from the main road you could almost mistake it for minarets or large oddly shaped conifers, almost a miniature Sagrada Familia growing out of the treeline in the gently undulating landscape. The site itself is in an area amply rooted in history; Bronze age ring ditches sit as shadows in the crops opposite, Fen Causeway drifts past echoing with the silence of feet and cart-wheels from 1500 or more years ago. It almost sits at a nexus, RAF Swannington with its ghosts of Mosquitos, the huge parishes of Bawdeswell and Reepham with their big churches squash in on it. To the East sits Marsham with it’s ancient forgotten Spa; itself sitting in a huddle in a land that appears to be part of a massive funerary landscape; vanished burial mounds flattened as far as the eye can’t see, from the cursus at Roughton to the bracken covered lumps of Horsford that remain.

The church was built by an equally odd man, the peculiar fevered individualism and brilliance of the Reverand Whitwell Elwin, a friend of Darwin, a man of letters who played ecumenical Pied Piper to a throng of young female confidants, there is no suggestion of impropriety in anything I’ve read about him and what he called his ‘blessed girls’ two of whom went with him on his trips to search for inspiration for the church while his wife kept house in the sparse Rectory next door to the old church. It would be easy to inject suggestions of something untoward, who knows basically, so I won’t. The women are all remembered inside the church as angels in the windows apparently drawn from life. 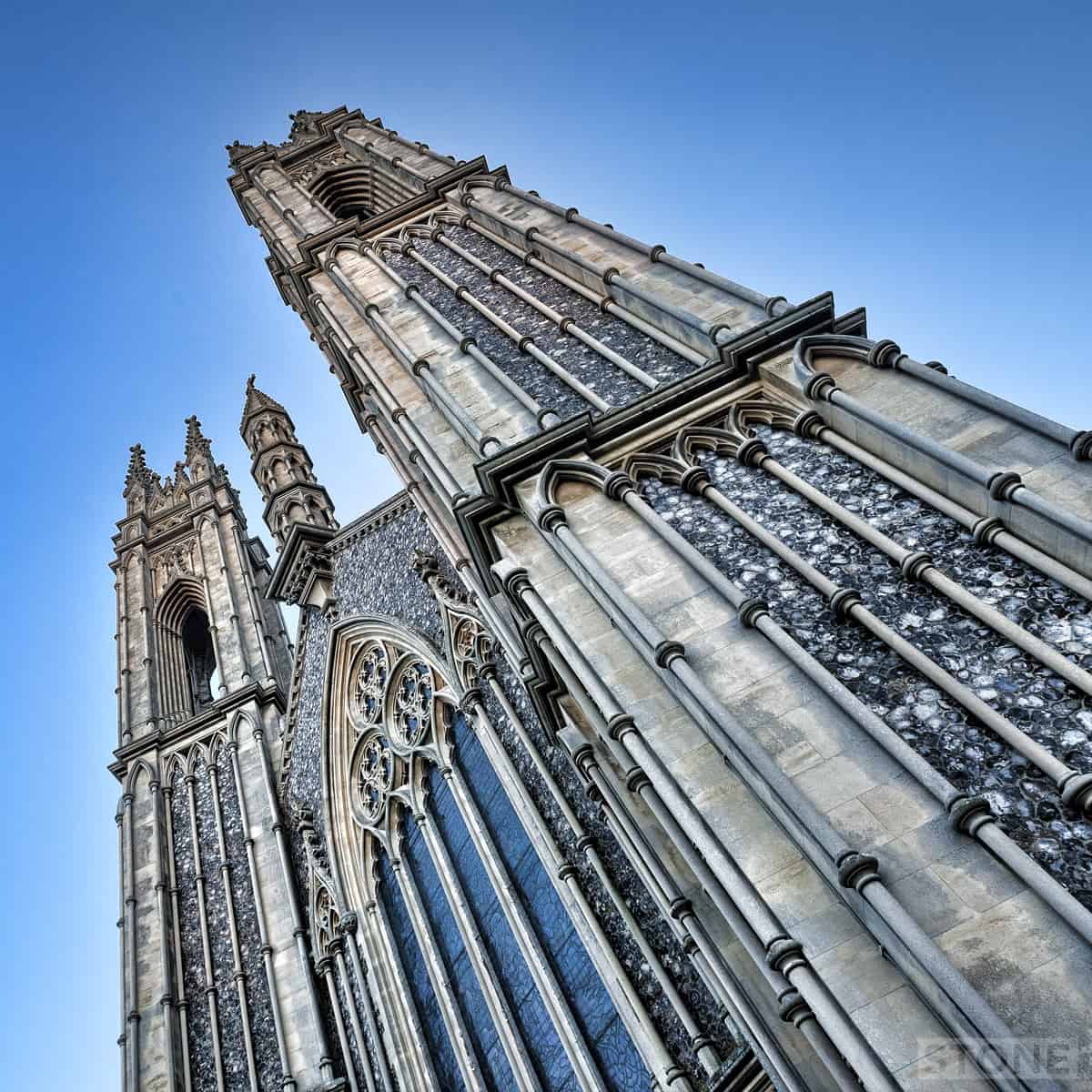 The building now under the management of the Churches Conservation Trust was locked when I arrived, the sun reclining slowly into a cushion of cloud on the horizon as I pulled in, the light probably just past it’s best, so I couldn’t take full advantage and do what I set out to do which was partly to look at the extraordinary stained glass, but you can see that here on Simon Knott’s site and benefit from his incisive and knowledgeable view too. To quote him on the subject of these personal pieces of glass:  ‘Elwin was the affectionate, almost intimate, counsellor, as the guidebook politely puts it. They are very lovely – you can see why he might have been tempted to seek their company’.

It is suggested that Elwin was descended from the John Rolfe/Pocahontas genetic interface, the almost myth of the unknownable. He was born in Norfolk 1816 and grew up in the empty spaces at Thurning near Aylsham, he already had his feet on the Squire rung of the hierarchy ladder, went to The Paston Grammar School in North Walsham studied at Caius in Cambridge. He took the holy orders in 1840, inherited a property in Booton and became the vicar in 1850. A colourful character well known locally, apparently the reason a post box was installed in the village due to the number of letters he wrote.

The church itself draws from all sorts of buildings including Westminster and Glastonbury, Oxford and Warwick and also involves some odd bits of his imagination. It is said that three of his five children died, it is entirely possible that this is some kind of elergy he formed to them in his dark private thoughts; it is a powerful one. He was after all an amateur architect, someone with an interest and a desire toying as we all often do. Not one that everyone liked it; Edwin Lutyens, who also had local links wasn’t madly keen. Pevsner cites him in the book ‘very naughty but in the right spirit’, so I assume he agreed. I think it’s a gothic beauty rising out of the fields. And the old church, well some of it is buried inside the walls, lost under flint and ashlar.

Because of the locked door and the dying light, I had to do that curious thing of skirting the church outside in the falling dark as the world turned slowly orange. basically trying and failing to get a view of it from a few different angles hunkered down in the trees. Crawling along anorexic lanes in the car to get a few extra shots I found a Pillbox, an outlying defensive dot I’d not seen before on the edge of the airfield, the concrete skeleton of a Type 22 octagonal pillbox gradually shedding its skin of bricks into the mud, another layer of archaeology and history being simultaneously lost and made.