Lost in a Landscape: Walsingham and the wolves 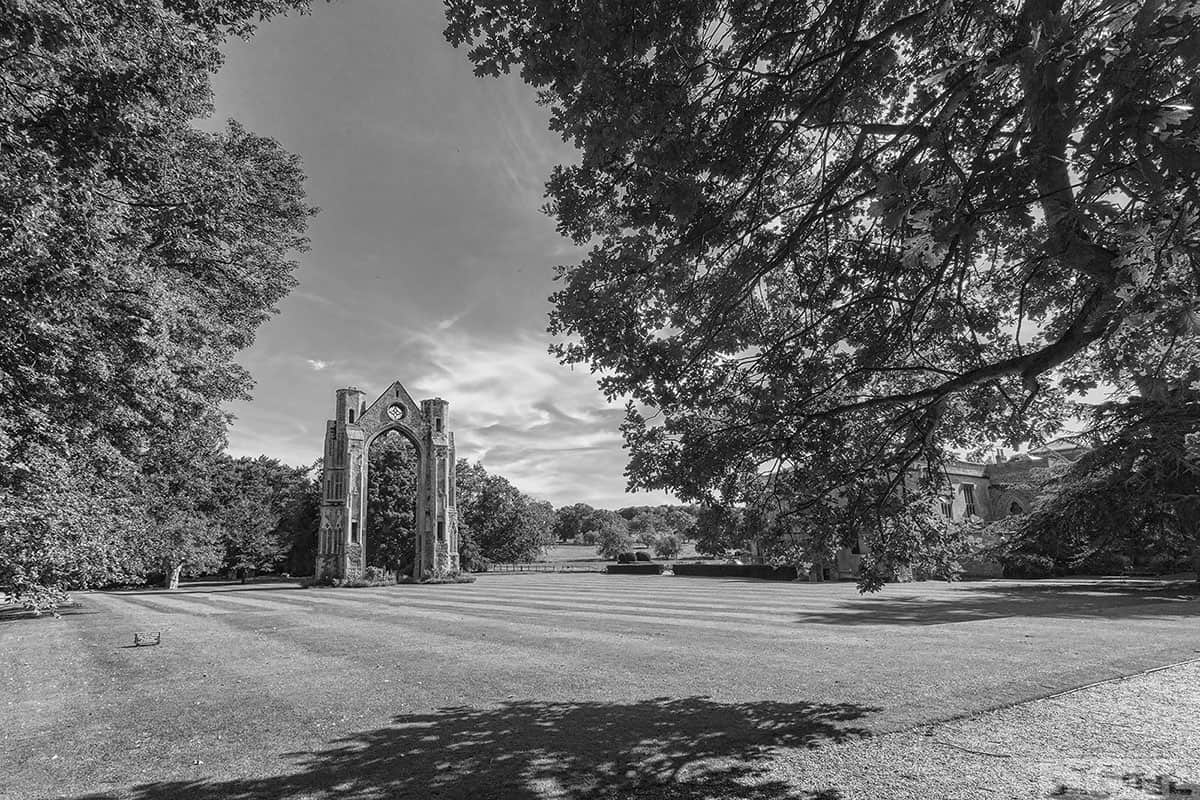 I have amongst my detritus a book on Norfolk abbeys and friaries, it’s a junk shop find from years ago. It dates from the 1950s and is extraordinarily complete for a slim tome, just enough background on everything to get you started without too much confusing detail, a small glossary to distinguish your Dominicans from your Franciscans, the black, the white, the grey and so on. It’s handy for walking the Palmer’s Way. That basic knowledge; a mental landscape and a timeline of events and you’re off. You can of course augment all that stuff you learned by accident just because it was there by having a smartphone and enough of a connection to actually look things up, add to that a map and the desire to wander fairly aimlessly and you are reasonably armed for discovery and what you can find can be vast.

I’m very much one for imagining, you show me a field with no lumps in it – where something has been under the plough for five thousand years, or a stain on an aerial photograph, a dry mark in a field on Google maps. I can pretty easily picture things in my head. Perhaps surprisingly burial mounds and ring ditches cover Norfolk, even a few all but invisible hill forts, and one that isn’t. Our arable past has all but obliterated a lot of them. The Roughton Cursus is more of a name than a place, the lines of barrows south towards Marsham Heath funerary landscape smashed and flattened in the nineteenth century, places like Three Hills, now no hills. We exist in a landscape that has been stripped and denuded of it’s visual complexity under the blades of the plough. It’s nice, sometimes, to have a full-on above the ground piece of the past right in front of you and Walsingham is one of the many priories in Norfolk where you can a wander not just amongst the tea shops and gaudy pseudo-religious flora and fauna of the tourist trails, it’s somewhere you can mainline a belting great big hit of heritage right there.

It is one of those places that isn’t lost, it’s pretty obvious, well documented, hidden only by a four pound charge to enter through a small museum of Walsingham life, and here lies the priory. For some reason I’ve never been before, Castle Acre yes, I’ve been and touched the walls of the remains of Whitefriars in Norwich and stood soaked in the rain of mysticism in farmyard at Bromholm stared in wonder at Binham’s remains probing a winter sky, watched St Benets Abbey from both the land and slide by from the river. Marvelled at prints of Blackfriars with the tower intact, stared at dissolute flint concreted lumps that mean virtually nothing, and driven around various Priory Lanes and ended up at various houses where the name Abbey Farm is the only fragment left. But for some reason it had never occurred to me to go to Walsingham, it’s so obvious it’s invisible, perhaps because we look to hard for what we can’t see and miss what is obvious. Or maybe it’s because it still sits at the centre of the spiritual trade it has been part of us for so long, unlike somewhere like Bromholm which long ago warranted a mention in Chaucer, was renown for its links to the Paston family, but is now just achingly beautiful and solitary in its forgotten destitution between the rows of crops. Walsingham seems almost cloaked by it’s past rather than the landscape itself.

One of the problems with bits of visible history is of course that they may not be exactly real. They usually aren’t as they were left. In this case a lot of what was a huge Abbey has vanished into the local post-dissolution landscape, there’s probably robbed out stone in every building for miles around. You can see bits of it peering out of things, window frames and bits of carved mullion, old bosses, struts and pieces of column, it’s almost as if it exploded very slowly over hundreds of years – the trajectory carrying pieces away to become part of teh lived landscape, disguied in our houses, barns, pubs, and farms.

What surprised me was there’s actually not a huge amount of the Priory left visible but what is there is imposing and rather beautiful to say the least. The huge section of the East end gives a real sense of why it was called England’s Nazareth and was so hugely important at the height of the powers of the Abbeys. It imposes itself on you as soon as it appears out of the trees. What follows is therefore not what you expect, because with the exception of the Well Room and some masonry that remains from the West end, parts of a crypt, and some other walls there’s actually not much there that doesn’t require some imagination. Not that I’d let that get in your way, it’s what those synapses are for.

Just before those annoying ‘private’ signs there is the crypt which has part of the mansion that is the Gurney family’s Walsingham Hall. It feels delicate, the weight of the house bearing down. The room shows signs of having been renovated at some point in the reasonably near past, the ceiling and the door jambs and corbels have the feel of machined stone about them, the walls are stripped of most of the top coat of plaster; all that separates it from the House is an oak door with a light that allows you to see wiring and bookcases that feel like they belong in a different time too. It’s oddly jarring. The room houses a timeline, those things sort you out like temporal coffee, it as slightly haphazard but it lead us through a thousand years of history in about ten minutes ideal for the expertly uninitiated.

The site itself is a nice walk, perhaps shorter than expected and has a couple of curiosities in it. The pack horse bridge is I think the only one in Norfolk, we’re not famed for them because there is no need in our flat accessible landscapes. In Yorkshire streams and brooks need cheap easily constructed bridges from local material in the middle of nowhere for sheep and men to cross. As you proceed along the path you come to a sunken entrance that would fit into mythic Fantasy, a section of Game of Thrones where a sunken track leads down to an head-bashingly low arch height, its gated and has strange little side entrances that lead up to the roadside above where the Ford Focuses trundle by. This is the land of bridges, a fantasy – neither relate to the Priory, both are constructs from garden planning, each a folly to please a rich landowner made from the wealth of stone waste on the site in the nineteenth century. As charming as they are awkward as these things always are in the slow dynamic of land change. 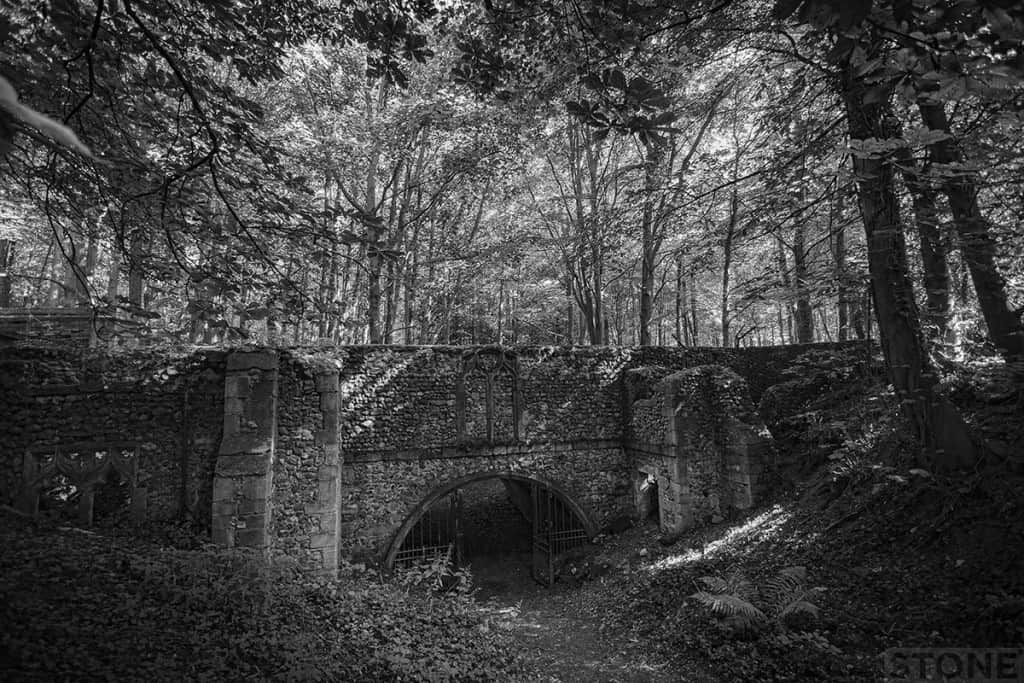 Then, thou Prince of Walsingham,
Grant me to frame
Bitter plaints to rue thy wrong,
Bitter woe for thy name.

Bitter was it so to see
The seely sheep
Murdered by the ravenous wolves
While the shepherds did sleep.

Bitter was it, O to view
The sacred vine,
Whilst the gardeners played all close,
Rooted up by the swine.

Bitter, bitter, O to behold
The grass to grow
Where the walls of Walsingham
So stately did show.

Such were the worth of Walsingham
While she did stand,
Such are the wracks as now do show
Of that Holy Land.

Level, level, with the ground
The towers do lie,
Which, with their golden glittering tops,
Pierced once to the sky.

Where were gates are no gates now,
The ways unknown
Where the press of peers did pass
While her fame was blown.

Owls do scrike where the sweetest hymns
Lately were sung,
Toads and serpents hold their dens
Where the palmers did throng.

Sin is where Our Lady sat,
Heaven is turned to hell,
Satan sits where Our Lord did sway —
Walsingham, O farewell!

A Lament for Our Lady’s Shrine at Walsingham – Elizabethan Ballad, circa 1600. Anon. 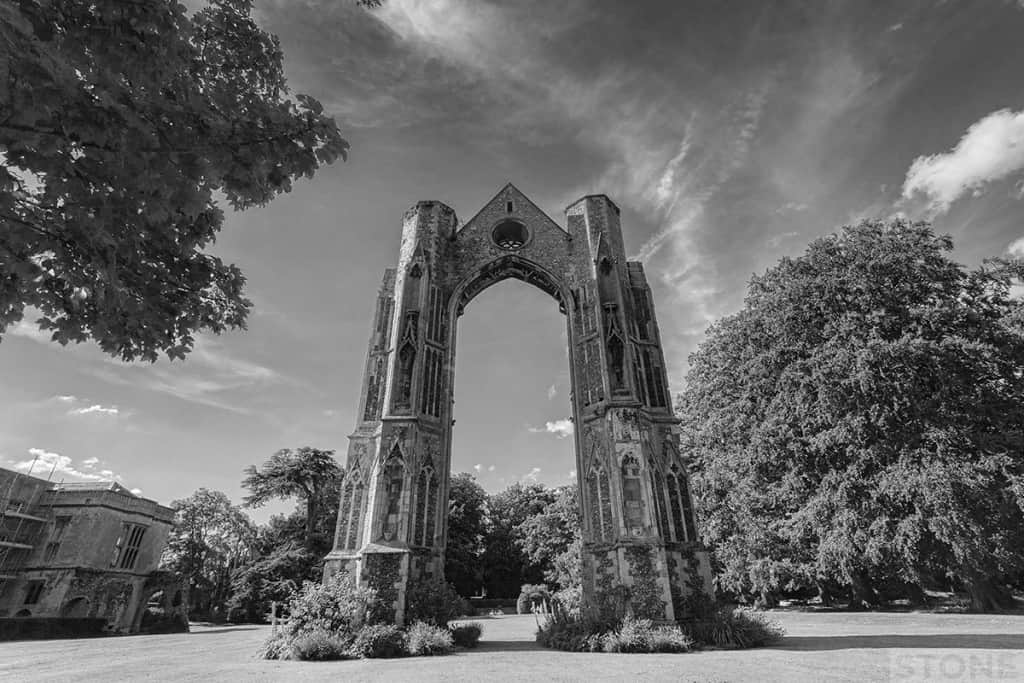