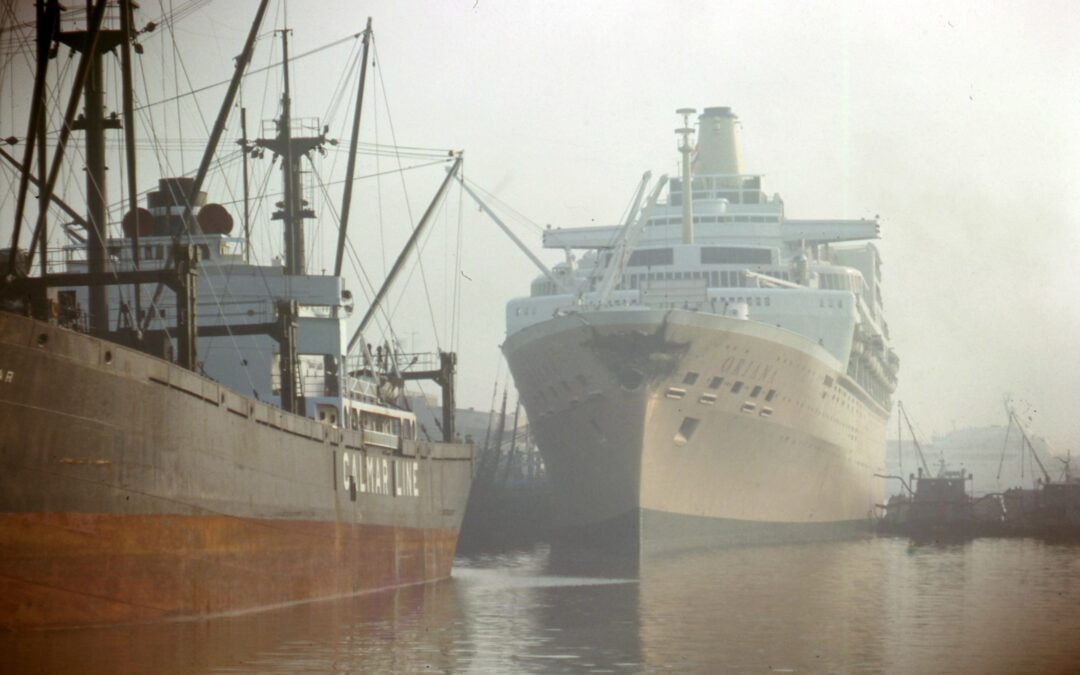 I’ve recently been given a huge number of slides, a real mixture of stuff which I’m now slowly working my way through. This pile came in a couple of huge bags from two friends, firstly Charlie, who gave me so many photos of stately homes from the 1980s I’m not sure what to do with them. Then I was given two huge bags by Alex Yates, another veteran of the weirdness that encompasses messing about with photography, collecting too many cameras and buying old slides at car boot sales and in junk shops. (You can find his work and play here btw). These just happened to be in the first bag of those I opened.

It’s got an element of synchronicity about it for me. My eldest brother Chris died at the beginning of the year, so he’s been on my mind a fair bit in this odd uneven time. He was in the Merchant Navy for a few years while he figured out where his life might go. In 1961 when I didn’t yet exist, he sailed with the SS Oriana, this ship. He would have been 21. He wasn’t really suited to stewarding and soon swapped to moving large refrigerated containers of Brazilian corned beef and other comestibles around the globe. It all ignited a latent interest in engineering, so he trained as one and ended up living in a magnificently wild part of the North Western territories of Canada doing it for a living instead. I will at some point write about him more, I miss him, his painting, poetry, and writing. The twin facets of curmudgeonliness and hilarity, the banjos, our twinlike taste for beer and rum, and his love of Woodie Guthrie. He wrote about the sea too, one of our dual obsessions, but he’d lived it. And as the dockside hove slowly into view, he said to me one night on Facetime, I’d like to stand on a Norfolk beach one more time and stare at the grey sea. I miss him, I miss what he unwittingly showed me and gave me when I was young, his art, his candour and his inquisitiveness.

These slides appear to be vaguely promotional, the sort of thing you buy in a PVC wallet onboard a ship to remember everything being slightly beige and wood lined, the multitude of bars, and vinyl funiture, in this instance on Oriana with about 1200 other people. This is small fry by modern standards, we build vast floating floating pollution generators these days. In thirty years time when the ice caps give up completely and melt, those things are where the remains of us will live on in some dreary Kevin Costner and Dennis Hopper dystopian hell-scape with beech laminate and really dry Martinis.
All that aside… these are I guess vaguely aspirational pictures of people who can afford cruises, for people who go on cruises, to make people who get jealous about their friends going on cruises, go on a cruise. Basically photos of people who are probably better dressed than anyone you’ll meet on your trips between overly built-up ports around the globe, they’re not being appalling because they’re fixed in space and time not sweating or swearing just frozen in a layer of silver halide.

Cruises, for me anyway, have always seemed a bit of a depressing tick box exercise; in what seems to me to be an unsettlingly quick, very expensive, slightly vague absorption process of ‘place’; this fountain in that square, that colourful market, that ruin, those bars and that restaurant, with large tracts of drinking heavily and eating quantities of food that bring on diabetes in between while bobbing about in a large tin full of viruses. But, each to their own I guess, I’d rather stare at a hill, walk up and down it then drown in a fishpond with a pint of bitter, but that’s just me, and possibly my brother I’d guess from the speed he stopped working cruise liners.

What these are more than anything, is a slice of 1960s advertising photography. I think the one I like most is of the chap mercifully unconscious, or possibly pretending to be dead in a comfy chair while someone beside him reads something out loud, and other people pose nearby apparently enjoying stuff.

This is still the nature of the beast; how a lot of this sort of photography still works no matter who takes it; a professional for a brochure or the ‘service user’ sharing on social media. However you dress up whatever lifestyle it is it still feeds the bone-crushing machine of late stage capitalism, And these, well, they are just transparent examples of how a process of transport is sold as a holiday via the medium of an Abigail’s Party scenario but without the benefit of Alison Steadman being Alison Steadman in it.

Fifty years ago this sales cycle was completed by showing someone slides of the holiday projected onto magnolia woodchip; the heart of the psychology of keeping up with the Joneses. We don’t change much apart from our absorption into the plexus is more total, this was the beginning, the invitation only Facebook album of 1960, but with canapes, that procession of other people’s holidays, smiling underneath the glaring sun sipping whatever leery coloured juice/alcohol mix is in fashion and showing every plate of food consumed, every swim, every sunset. We remain the commodity.

Interesting though, how we vaguely shift and yet stand still amidst the ever rising waves. 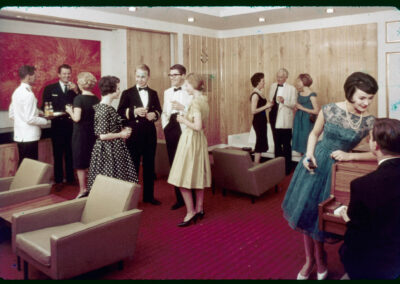 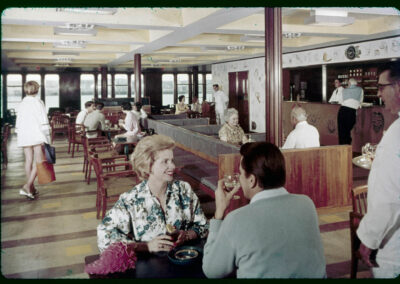 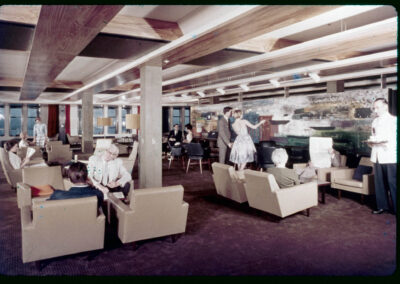 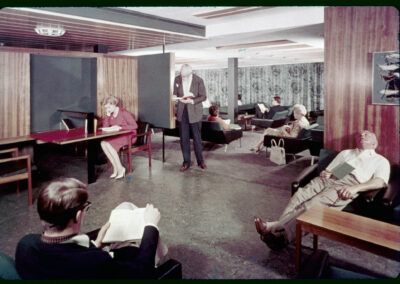 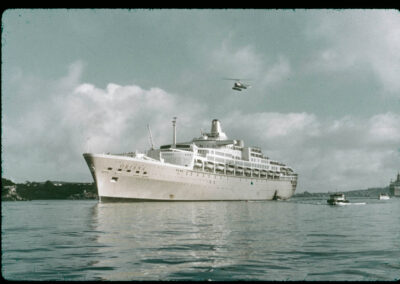 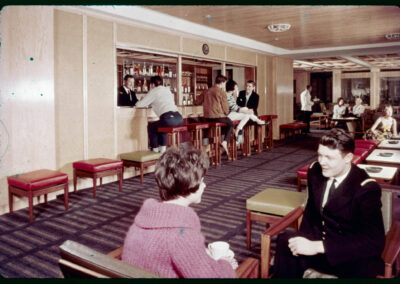 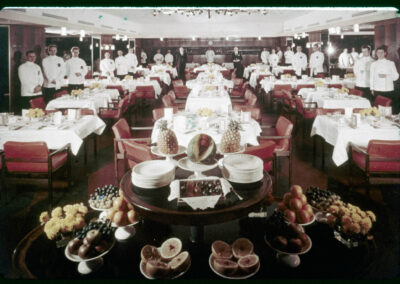 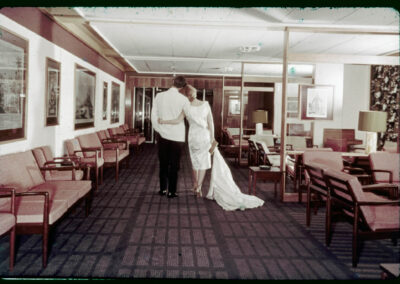 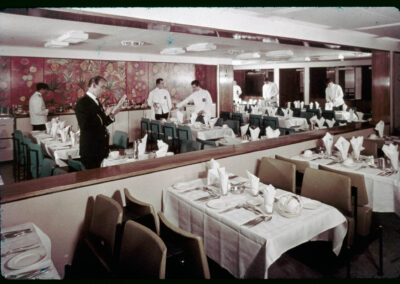 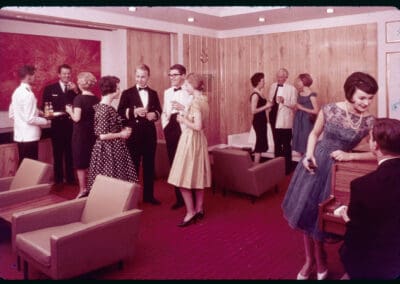 You’ll note the last slide in the gallery is red, they were all like this, the fix on the commercial slide reproductions might have been a bit long in the tooth, but blues do tend to fade first. This is particularly true of some consumer orientated Agfa and Kodak stocks apparently which wasn’t ever really intended for archival. You’ll see the opposite in commercial CMYK printing where the Magenta tends to leach out first after exposure to sunlight, look at old prints in charity shops. Nothing lasts forever.

Slides are from a Walton series. There are some I think taken by whoever was on the cruise which are more interesting which I’ll put up soon..