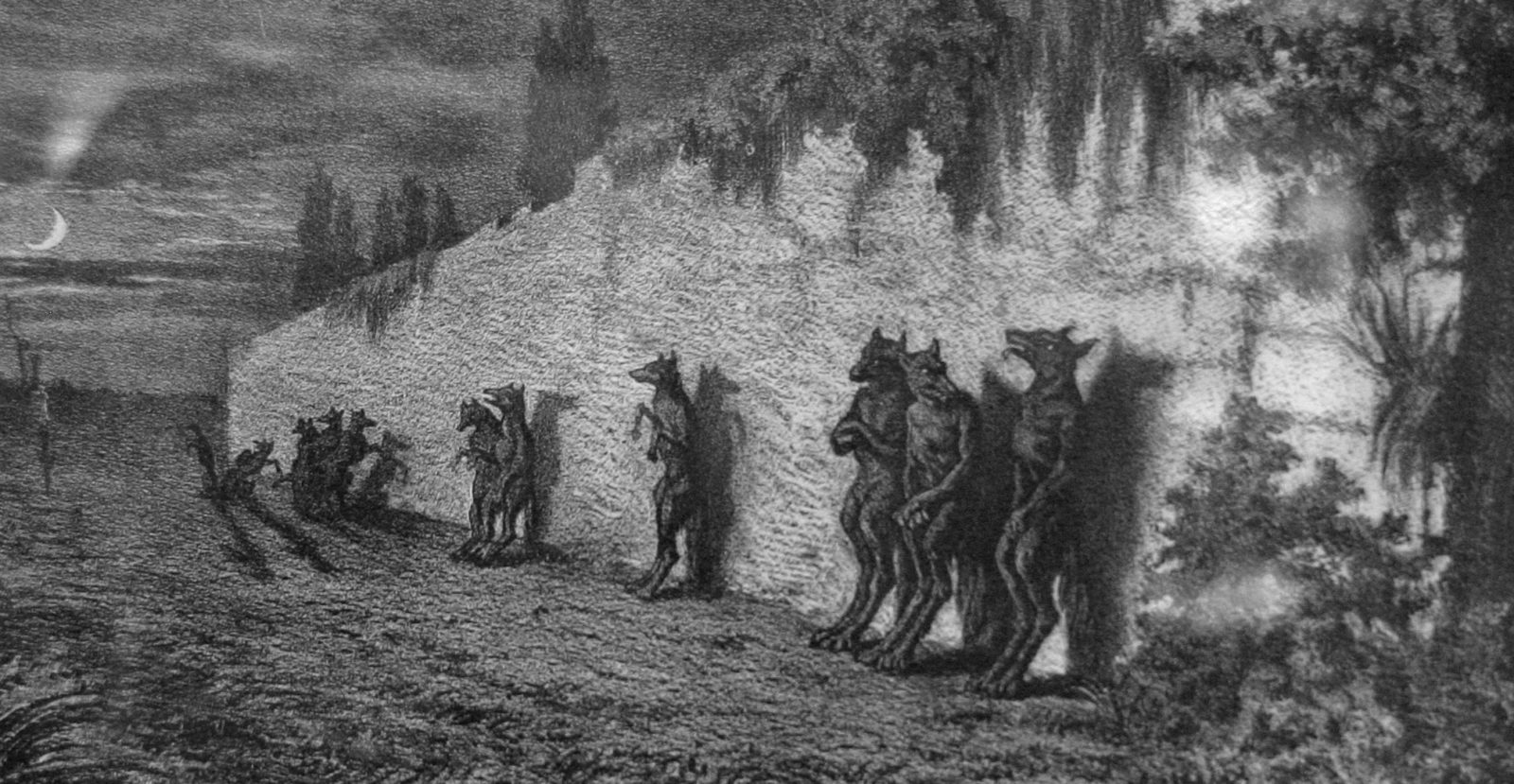 A Manchester Encounter, or, The Black Dog of Peterloo

From an unpublished and anonymous letter now in the collection of the Portico Library, Manchester. Typography dates it to the first quarter of the nineteenth century. Spelling and punctuation have been adapted for ease of the modern reader.

“How often do we pass through life recalling chance encounters of the briefest duration. Against all reason, we remember a snatched conversation or a face glimpsed in a crowd, rather than those interactions born of long and amiable acquaintance.

There is no man living who does not recall the calamitous events of the 16th of August just gone. It was then I saw him, on Saint Peter’s Fields, amongst our band of comrades crying out for enfranchisement. He was a fellow of swarthy mien, dense of whisker and grim of visage; yet he was my brother and I would have called him such. I had not met him previously: not at any meeting; nor in any one of the multitude of low public houses frequented by men of his sort – or of the sort I took him for; nor did I clap eyes on him afterwards. Yet our meeting, which was no meeting, has remained in my mind with great clarity.

He moved through the company, glancing from side to side as though searching for some person. His gait was unbalanced, as though there was a great pain in his ankles, most dolorous to bear. The shoulders of his jacket were gnawed at the seam and the fabric of his shirt peeped through. I remarked privately upon the whiteness of that shirt, which, set against the slovenliness of his garments otherwise, seemed to my eye most remarkable.

More notable still was the matter of his hair. He was an hairy man: more hirsute than Esau and the most thickly-pelted fellow I ever met. His nose, what I could see of it, was prominent and surrounded by a dense undergrowth of beard and moustaches. I wondered if he tended such a riot of facial hair in an attempt to disguise the vast size of that snout. If he did, it was not a successful stratagem. The tip glistened with unwiped moisture; his lips were so thin as to give his mouth the appearance of a wide rent in a fur muffler, teeth glinting through the gash.

Then there was the manner in which he tugged the brim of his hat over his left eye, as though he craved to shield that half of his face men dub the sinister. I imagined he bore some disfiguring mark and had wearied of gawping stares. My heart surged with fellow-feeling, for I too bear a disfigurement, albeit not of the visible sort. Perhaps it was that drew me after him, as surely as a child follows a piper.

Making one’s way through a press of bodies is never a simple task, but this man slid through the congregation as easily as a knife through warmed butter, and I trotted in his wake with greased facility. There followed the most singular of occurrences. He paused, one foot raised and one touching the earth, snuffed the air with his long nose, reached into the wall of bodies, and brushed a woman on the shoulder. At first I thought he greeted a friend, but when she turned I knew from her demeanour it was not so. I have seen paler faces only on the freshly-deceased, when all blood drains into their backs. This was not terror however; not at all – rather some emotion far more profound. I watched her features shift from questioning, to refusal, to denial and finally settle upon calm acceptance; and all of this in the time it would take to tear a piece of bread in half. Then and only then, he withdrew his hand and it resumed its habitual position, gripping the hat-brim in order to cast his face in shadow.

I could not stir. All forward motion was arrested as surely as if my knees were made of gravy. The crowd tossed me to and fro and I believe I would have toppled at the insistence of their jostling if the hairy man had not glanced in my direction and grinned. I wish I had turned tail and run, for it would have been the wiser course of action. Do not think me brave, however. I was as craven as a cur that is hauled on a chain by its master. Fifteen times I watched as he paused, reached out his paw and laid it upon the shoulder of some unsuspecting soul. Fifteen times I saw the same change of expression, the same eldritch peace at the close. Man, woman, child: he spared no-one.

I wondered why he did not touch me. Here I was, a faithful disciple and upon me he bestowed nothing. I dashed to his side and clapped my hand upon his shoulder, which heaved, with weeping or laughter I had no notion. He twisted his neck, further than I thought possible for a man to do without snapping his spine, and glanced at me slantwise. It was only at this close proximity that I noticed the smell of him: the reek of pork left on a windowsill so long even a dog will not purloin it. He bared those long teeth I had hitherto only glimpsed, and shook his head, the lank rats’ tails of his hair swinging in time.
Ask not, and be fortunate, he barked.
I opened my mouth, for I seethed with needy questions.
Before I could spill one of them, he laughed; a huffing sound halfway between a wheeze and a strangle. Then he turned and bounded through the mob. As he sped away, his coat tails flapped and I saw, between them, bushy as the brush of a fox, his tail.”

Rosie is a novelist, poet and sings in post-punk band The March Violets. Her award-winning poetry has been widely published, including in The Rialto, Envoi, Butcher’s Dog and The Bangalore Review. Her latest solo collection is ‘Everything Must Go’ (Holland Park Press), based on her experience of throat cancer. Her debut novel ‘The Palace of Curiosities’ (HarperCollins 2013) won the Mslexia Novel Competition 2012 and her second novel, ‘Vixen’, (Borough Press 2014) was nominated for the Green Carnation Prize.
http://www.rosiegarland.com/

Check out The March Violets ‘Mortality’ pledge at
http://www.pledgemusic.com/projects/mortality