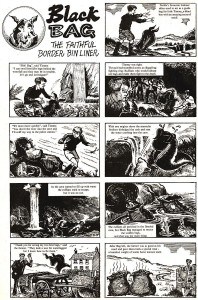 A couple of Black dog tales, neither experienced first hand which is more-or-less how Folklore works and how it evolves. So much so that Nick pointed out in his message that if he asked the other people involved now the story would change, this is his telling of a story in the oral tradition. This features a black bin bag (thanks to Jess for this particular reference I’d forgotten) which makes it extra special, it gives us contemporary positioning for the beast and a different set of cultural references. It also shows again how entrenched the beast is in our mental landscapes throughout Norfolk in particular. These are from two places, the first short one is Overstrand, which is my home Hell-hound in a place that I spent a fair while in as a youth (more on which another time). The second is nearer Fakenham and Sculthorpe Moor in the early 1980s.

‘Firstly, my grandma who lived at Felbrigg reckoned her great uncle has seen Shuck on Overstrand beach. When I asked if he died or fell on bad luck she said he’d had a big tax demand, which was fairly disappointing when you’re expecting terrible arcane horrors.’

‘The second involved some of my friends in Sculthorpe where we grew up. It must have been a summer in the early eighties, I was off staying somewhere for week and missed all the “fun”. To the south is Sculthorpe Moor well before the days of the Hawk and Owl Trust, which was then a large untamed, marshy wood leading down to the Wensum. It was a genuinely creepy place to go,  no paths, few landmarks, where you inevitably ended up with water going over the top of your wellies.

A kid we knew lived in one of the houses down the old dead end back road to Fakenham that got cut off by the western bypass. His house backed zolpidemsleep onto a small field which backed onto Sculthorpe Moor. We were all heavily into horror, ghosts and ouija boards at the time, but this boy was really spooked by it and the kids would cruelly wind him up about it. Carving turnips to look like skulls and sticking fake bloody gloves in a pile of sand outside his house, nasty little shits that kids at that age are. They starting telling this kid that there was devil hound called The Black Dog of Sculthorpe Moor, and it really freaked him out because of the proximity to his house.

One day, they took the ruse a step further. One of them asked the kid to come out as they were going to ‘muck about’ in a meadow further along the road. They told him one of them was absent because he was having a piano lesson; he was actually hiding in the meadow. They walked up the road talking about ‘The Black Dog of Sculthorpe Moor’, the boy getting more and more nervous; the meadow was one of the easier ways to get into the moor without negotiating barbed-wire fences, hedges, and ditches. By the time they got to the gate he was petrified and refused to cross it, so they reassured him it was OK, one of them walked a fair way into the gorse filled meadow to prove it. On cue the ‘black bin bag of Sculthorpe Moor’ jumped out from the undergrowth onto the screaming victim. He jumped down from the gate and ran at full pelt screaming down the road homewards.

I’m not sure of the aftermath of this sorry affair, but their appeared to be no long lasting effects on the kid, even if he didn’t want to play with us lot again. This is all told second hand, so there may be mistakes or embellishments, but I understand the bulk of it to be true.’

Main picture still from Stand by me © Castle Rock Entertainment.