The Norwich School of Art 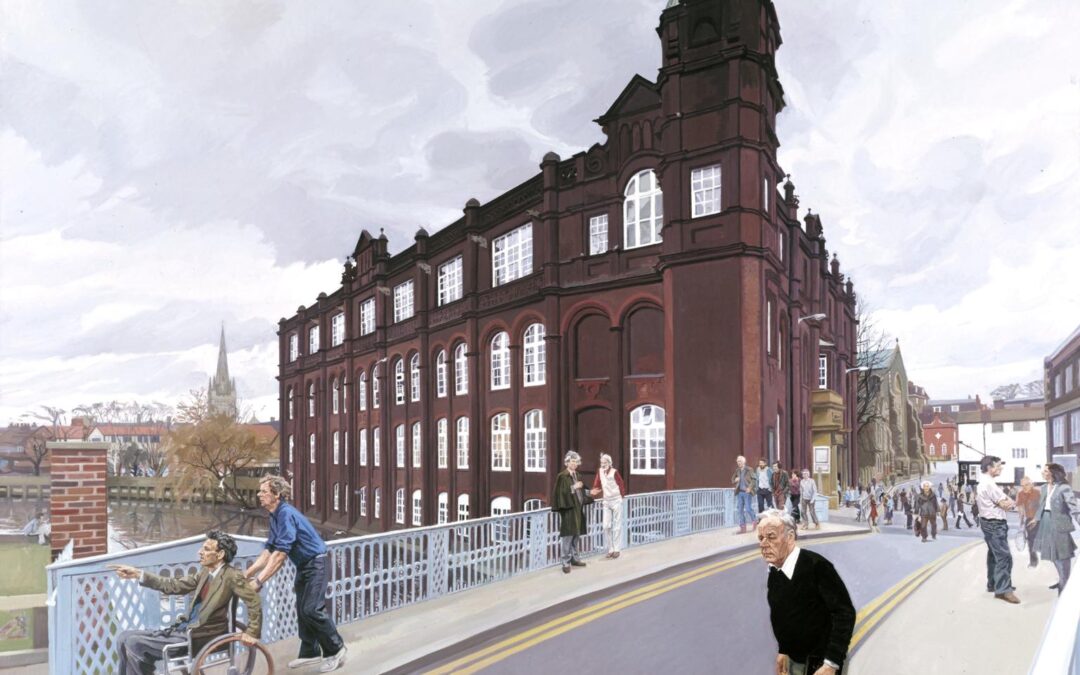 This painting is by  John Wonnacott. He taught us life drawing at the Norwich School of Art (Now NUA) in the first studio on the corner overlooking the river which is in the painting. I first went in 1982 as an external student, that’s to say my then O level and A level art teacher Bruce Sherratt decided I was worth wasting a train fare to Norwich on in an attempt to get me plugged into art as a career, he needn’t have worried I’d already decided I was going to take a punt on it somehow or other. When I arrived to commence Foundation in 1984 this painting was still hanging on the end wall of the studio overlooking the River Wensum, which occasionally lapped up and leaked into the print rooms below.

It was and is a vast and imposing piece, two and a half metres wide. John Wonnacott himself was an imposing character too, knowledgable and direct with us as to strengths and weaknesses, I can’t remember much except being told to ‘be sure about my line’ which I wasn’t and still tend not to be if anything involves pencils, ink or paint.

The figures in it are mostly tutors at the college including John Wonnacott himself; he’s the chap pushing the wheelchair, the figure in the wheelchair is John Lessore, the bloke on the right is Edward Middleditch, Head of Fine Art. The other figures are Lynda Morris and Colin Tester. It’s part of a series of paintings he did of large buildings in Norwich, already an important figure in art; he’s painted the queen and has a huge canon of work. He’s actually perhaps unwittingly quite important as a social documentarian, tracking the rise and fall of the architecture and space in the city in the 1980s.

He left Norwich School of Art the year he completed this, 1984, it is now in the possession of the Tate. I left a year later and ended up on the dole, which was a fairly standard thing in the early to mid-1980s. I like this painting a lot, partly because of where it is, and partly because of where it exists inside me – at a point where anything seemed possible, probable even, I’d undone the apron strings and run into the mystery and excitement of what might be and that all started here. That is how we carry art, inside us, whatever the meaning the artist gives it, we wrap it in more and make it our own.