In 2012, I received a few emails from a chap called Tom Brittan who now lives in France. I”ll let him recount his story pretty much unedited; he lived just off the Unthank road and vividly remembers the bombs falling and the aftermath.

My most vivid recollection of the April 1942 Baedeker raids is the sight on emerging from our air raid shelter of a red sky lit up by clouds of burning pieces of textiles, probably from Curls and Buntings, blown by the wind in a southerly direction over our house and pharmacy on Unthank Road at the bottom of Bury Street. 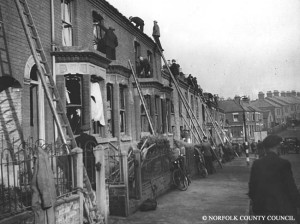 We came through those two nights unharmed but had a near miss in May 1941 when a lone raider dropped a stick of bombs which caused damage in Bury Street and on the other side of Unthank Road. People in Bury Street were killed and injured and I seem to remember that an unexploded bomb was removed the following day. We were not in the shelter because there had been neither siren nor crash warning but were uninjured. However, shrapnel damaged the walls in several rooms and the blast from the bombs that fell a few houses away broke very pane of glass and dislodged a lot of soot in the chimney. I was taken by an air raid warden to a relative’s house in Glebe Road while my parents did what they could to clean up and look after the premises until temporary plywood boarding could replace the broken windows, especially the shop front.

Another incident that I remember (unconnected with the May 1941 and April 1942 raids) happened when road and streets were littered with wire. Police and wardens warned people not to touch the wire, some of which must have fallen across overhead telephone and, perhaps, even electricity, cables. I saw the wire in the morning and it was said to have been released by exploding AA shells for the purpose of entangling the propellers of enemy aircraft. It seems strange for boffins to experiment with such a weapon over a built-up area and I have never seen any report about it. 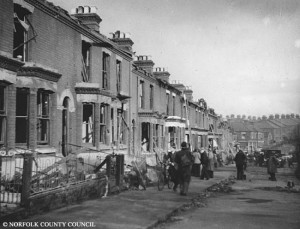 those hit and destroyed by the bombs and the photos were taken from near a brick-built public air raid shelter that stood above ground in the street. 2 Bury Street was the address of the dispensary and warehouse, 168 Unthank Road was the address of the pharmacy and 166 Unthank Road was the address of our house which also had rooms over the shop, dispensary and warehouse. They formed the corner of Unthank Road and Bury Street and are off the right hand side of the photos. The shop has been an off-licence trading, I think, under the name “Le Château”. A Chinese take-away now occupies our dining room on the ground floor of 166.

The shop was a butcher’s at the time and it stood, diagonally opposite the pharmacy, at the corner of Unthank Road and Portland Street. I drove down Bury Street on a visit to Norwich last November and found it difficult to realise that during as well as before the war, a car parked in the street was a rarety. Now it’s not easy to pass between the rows of cars parked against both pavements !

I notice in the photos that the iron railings and gates had not yet been removed by the Council in the “war effort” to be melted down for use in the manufacture of munitions or military equipment. This must have happened later in 1941 or in 1942. I remember that there was no street lighting during the wartime blackout but had forgotten that lamp standards had white rings to make them more visible to pedestrians after dark. Similarly, the mudguards and running boards of the few cars on the road as well as those of lorries and buses had white paint around the edges. Headlamps, and in buses, the interior lights were severely masked.

The white roofs of Eastern Counties buses were overpainted with camouflage at the beginning of the war and that when the time came to repaint the buses, their roofs and pre-war red and cream bodies were covered by an overall coat of “battleship” grey? There were no new double deck buses until a few utility ones appeared towards the end of the war. These (built by Strachan) as well as the wartime batches of single deckers totalling around 30 (built by Eastern Coachworks at their works moved from Lowestoft to Irthlingborough) were painted “battleship” grey before delivery. A lot of buses used on rural services ran on producer gas generated in a trailer.