If and when you visit the Western Front, which a huge and growing number of people do partly because of the centenary and partly because you know, corner of a foreign field and all that family stuff, you are entering a piece of ground that is pretty much at the epicentre of the Northern extent of the front for the British and Commonwealth. It is redolent of so many things that exemplify what the CWGC (Commonwealth War Graves Commission) actually do in a perpetual state of remembrance, day in day out, cleaning, pruning and preening, cutting grass, cutting stones, replacing the wear and tear; layers slowly sloughed off the Portland Stone like dead skin by the often dank atmosphere and changeable weather.

Here lie a terrific number of men from all classes and a huge number of countries; just shy of 12,000 men are interred here, of those over two-thirds are unidentified, some have clues, a scrap of uniform or a button found during clearances of the fields giving away a regimental clue in the ranks of shuffling faceless ghosts. Behind them stand another 34,000 men missing in the churned now hardened mud, overgrown by maize and sugarbeet; corn sways above their heads. They comprise around a third of the total misplaced shared with the other three memorials to the missing on the salient; Ploegsteert, Messines and the daddy, the almost surreal Menin Gate with close to 55,000 names on it. On the Tyne Cot Memorial they form an arc and a series of bays, a list by regiment, each sub-categorised by name, the names punctuated by paper poppies stuck to the stone, in cracks with blue tack or tape. It is as bewildering as it is vast, serried ranks of stone, a cross and lines.

Years ago you used to park up on the road, down-slope the spires of Ypres in the distance, above you the front wall and gate way. Now there is a car park with toilets to cater for the massed interest, a short walk along the side wall along a raised walkway that can take you round or through the information centre; a curious metal and glass affair, speakers buried in the soil whisper sci-fi Siri style; a calm and chilling list of names of the known interred and missing, photos flick up on a screen to accompany the cycle. Inside the whispered darkness of the rooms, screens flick and twitch with information, rationalising death into graphics. Glass cases of earth sit central a surface scatter of remnants like an archaeological diorama the physical reminder of lives lived finished or changed in this arable land a century before. And on one wall a tinted picture window stares blankly out over the Killing fields of mundane brassicas and sweetcorn.

The Cemetery is full, a silent city, its undisturbed inhabitants mix with drifting groups of school and coach parties walking and talking, mostly quietly, between the rows of men. The schoolchildren armed with clipboards and biros, projects rolling out, some have targets and search the rows, seeking out once known now almost invisible Great-Great-Uncles or Great-Grandfathers, the hushed planting of wooden crosses next to headstones, still reverential in their little acts of kindness for the lost, handing down a memory over the generations. I’ve done this, for my mother’s and for my father’s for who the chance never came embroiled in their own memories of their own war, it wasn’t as common in the 1930s, 1940s and 1950s to do these things. In the bluing light of the early evening young children climb on the cross of sacrifice chaperoned by a fraught French father. On my first visit I’d thought this was wrong in some way, but the steps are intentional, you can look down across the rows from here and in the distance see Ypres’ Lakenhalle and the Cathedral’s spires spiking up above the plain as the men who came here in the 1920s would have done returning as they were in those existential pilgrimages to the battlefields where they wasted their doomed youth and survived where many of their friends didn’t. Beneath your feet is a German blockhouse one of three that remain in the cemetery, two still show their broken concrete skin, this one is covered in a great coat of Portland Stone, just a square peers out, you are viewing what we would in Call of Duty Parlance so charmingly call a killzone, you are viewing a field from the central point of death. From this source you also may understand where the cemetery gets it’s name, apocryphal maybe that these crude reinforced rectangles of metal and stone and the jumble of broken farm buildings nearby silhouetted against the ridge from the British lines could have been a visual reminder of the Tyneside Cottages. The truth is maybe different the buildings in the area were coded with the names of rivers, whatever; the Northumberland Fusiliers where here after the fact and the name must have resonated with them either way. 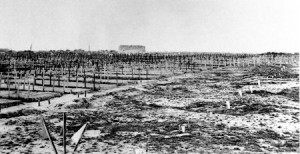 Hard to believe when you look down across these beautiful fields on a brilliantly sunlit day in early summer, The spires of Ieper 5 miles distant, that in the late summer and autumn of 1917 these were the killing fields of Passchendaele. 3,000 British guns poured 3.9 million tons of metal into the German lines, the Germans returned with equal amounts of shells, the ground became a quagmire where you were as likely to drown in the liquid mud as be killed by bullets or shrapnel. Somewhere between half  and three-quarters of a million men from both sides where killed or injured here.

None of these large memorial grounds feel particularly victorious, least of all Tyne Cot, there are no stone lions, just two carved figures like angels above the pavilions at the finishing points of the memorial arc. These places are more than burial grounds they are sepulchers to almost criminal acts of protracted barbarity; hot metal slung across a mile or two of wracked land for four years, the almost infinitesimal creep backwards and forwards every inch bought by bored, tired, wet men who should be behind a desk or down a mine, eating their tea or walking with their wife and children in the park rather than paying into industry coffers with their all. These tens of thousands of deaths are only a part of a huge temporal vista that rings on and on; the axial point in a suddenly irrevocably changed web of stories that stretch far across the continents both backwards and forwards in time remembered now by those red splashes on the white stone “for great uncle John, for what you did”, “for our freedom”, “God bless you”, “Heroes”, all doubtless meant and heartfelt but part of the network of small lies we drag along behind us to make it seem alright to have condemned these willing boys with the failures of empires using the tools of nationalistic fervour to fight for land over old blurred enmities that had wracked the continent for centuries. And still they are here.