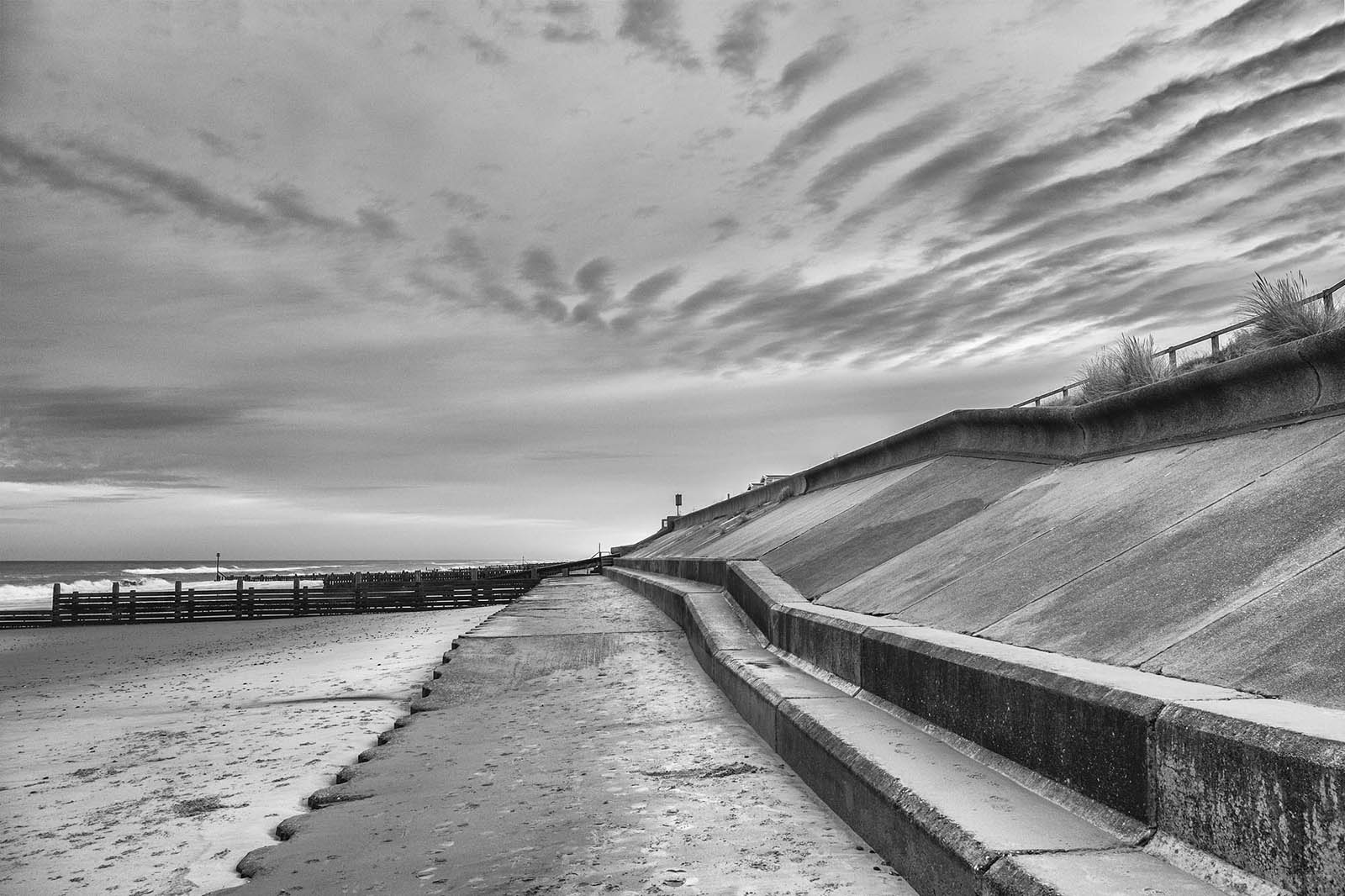 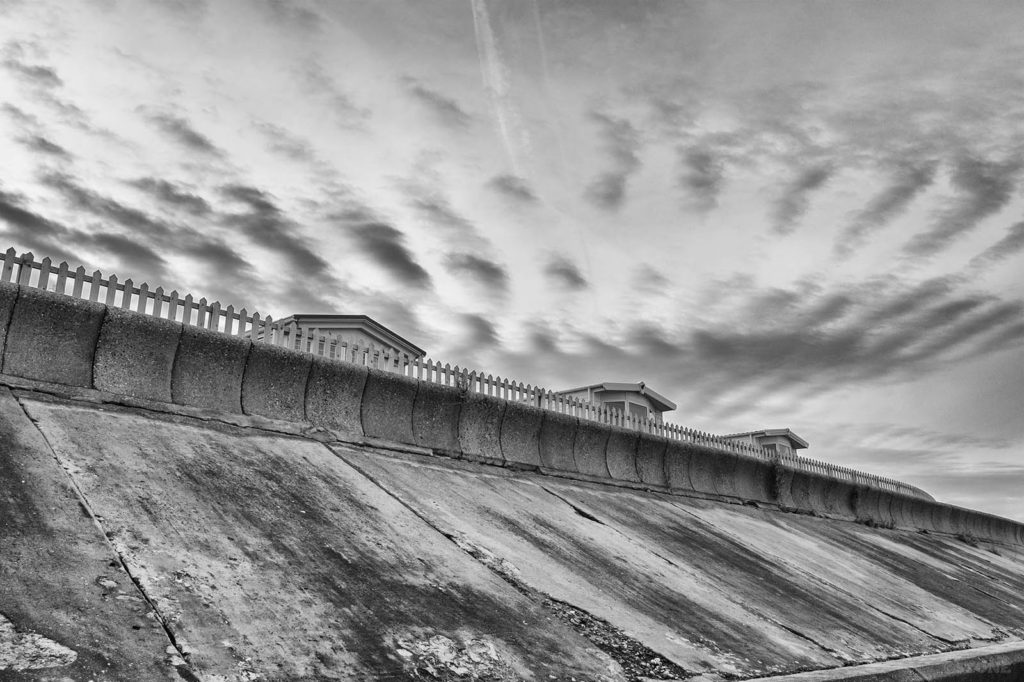 Bacton; a place name to conjure with if you know North East Norfolk’s emptier fringe. A confusing piece of coast where as you move North of Happisburgh the cliff first drops and as you swing further there is a vale where Walcott sits. As the cliff starts to rise a series of tiny villages grow on the shallow slope where the mud, clay and sand cliffs start to rise and gain height again towards Mundesley and Trimingham. Walcott marks the lowest point, the exposed concrete edge leading on past the Poacher’s Pocket where the welcome to Bacton sign marks what is actually what remains of Keswick, a village mostly long lost to the North Sea. What remains of Keswick fades invisibly into Broomholm with its broken medieval priory and on to the fricative centre consonants of Bacton.

It’s an Anglo-Saxon place; Bacca’s tūn, the farmstead of Bacca, old English Anglian, what became Baketuna in Domesday and Bacton and Bacton Green today. The pattern of names around it fade in and out of temporal focus, more ~tuns such as Paston. While Gimingham and Trimingham show their age with their ~ing~ marking earlier Anglo-Saxon incursions. Edingthorpe and Thorpe Market show the change in language as the Danes settled. And Trunch, a place which could point at something which predates the arrival of the Frieslanders, Angles, Saxons, Jutes and Danes, a name conjectured to be a possible rare survival from Norfolk’s Celtic past or could be Norman French. And if it is the former Walcott could even be those Britons still living here in the shadow of the new lexicon crawling across the landscape erasing a different past we can’t know. There are three places called Bacton in Britain, Suffolk, Herefordshire and this one, ours. It clings to the concrete, gabions and the wooden skeleton that snakes intermittently along the coast and sprawls like morse along the roads inland.

These villages names that conjure with memory. We didn’t come here often when I was a child. It had less parking than Walcott or Mundesley and sits in the shadow of caravan parks and Bacton Gas site, imposing it’s ugliness from the shallow clifftop, looming up over the beach, I suspect it didn’t suit my mum’s pretensions. We came here to shrimp, my dad armed with a two foot wide net, a proper one. I had a flimsy toy bought from a bucket full from the local shop. His a pole handle handle, mine a cane. They had a scooped edge to push over the sandy and shingle seabed, a loop of wire to hold the net open. You worked your way backwards and forwards looking for a shoal of little decapods scattering along the sea floor. He’d had some success before at Mundesley and further up on the North coast, taken home a couple of slopping buckets of full of these flicking almost transparent sea-lice, boiled them brown and pink in the seawater they travelled in. This time all we caught was toilet tissue and hard round turds. There must have been a sewage outflow nearby, I think it’s still here, either longer or no longer used, I may be wrong. We recoiled from it packed up the nets fast and that was my last visit, probably in 1973. 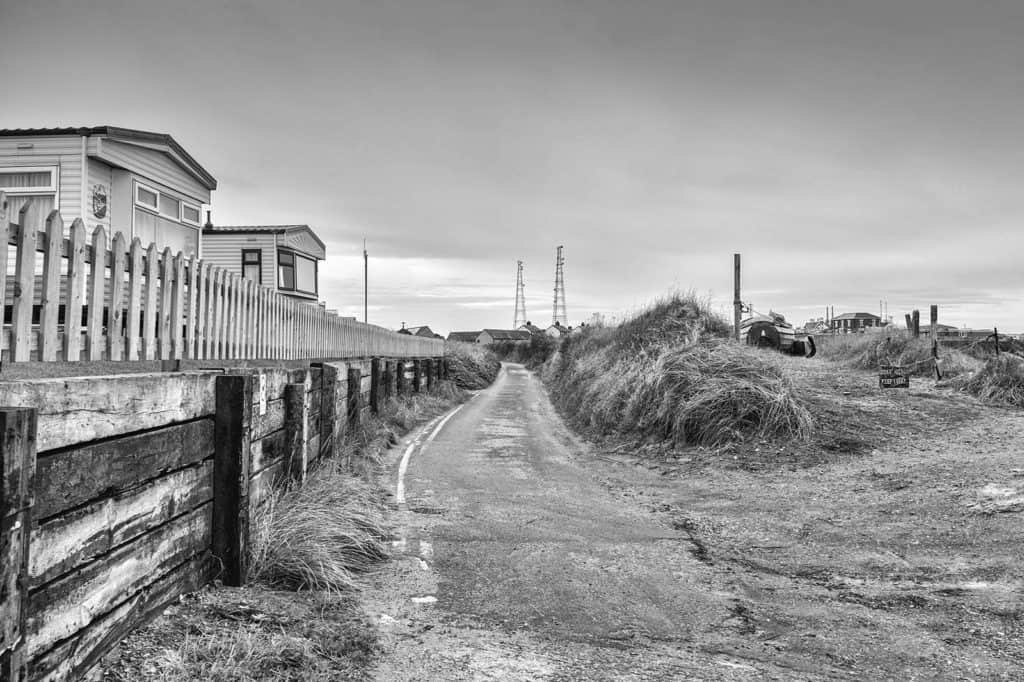 Bacton Gas terminal was vital for the national energy infrastructure in 1970s and 1980s Britain, one of six terminals for our offshore gas. The tumbling expanse of pipes was commissioned in the late 1960s and started production in 1968. At its peak 12 million cubic metres of natural gas a day came through a site of only 180 aces with a frontage of just over half a mile of cliff, piped off down the side of the old railway trackbed to North Walsham. It is still in use today although gas North Sea gas has declined rapidly over the last thirty years.

It was a huge part of the local economy and a major part of the community, along with Smedley, Crane Fruehauf and The small engineering and plastics companies that flowered between the walls of wheat and beet. Mums and dads of school friends and friends themselves worked either here or offshore on the gas platforms as part the industry. People appeared, coming here to work and in some cases vanishing again to Aberdeen, Peterhead or Humberside following the flow of specific jobs. The industry is a routine part of life in North East Norfolk, friends went out on the rigs often straight from school, worked offshore, did diving and safety courses. Rig helicopters flying in and out were a feature of life traversing the town taking staffers offshore and back home. There are rotors the noise of rotors over the beach today. It triggers a memory that pointed me at just how much the industry is part of our lives out here. In 1981 a helicopter went down; Whisky India – a Westland Wessex 60 run by Bristol was transferring Amoco gas workers from the Leman field to Bacton dropped 1500 feet into the sea just of Happisburgh. The engine had failed. Life is unfair, not enough of the wreck has ever been recovered to complete a full investigation such is the nature of the shifting sands out there. Including the pilot and attendant 13 men died in the crash including a schoolmate’s dad. The silence the next day at school was deafening. 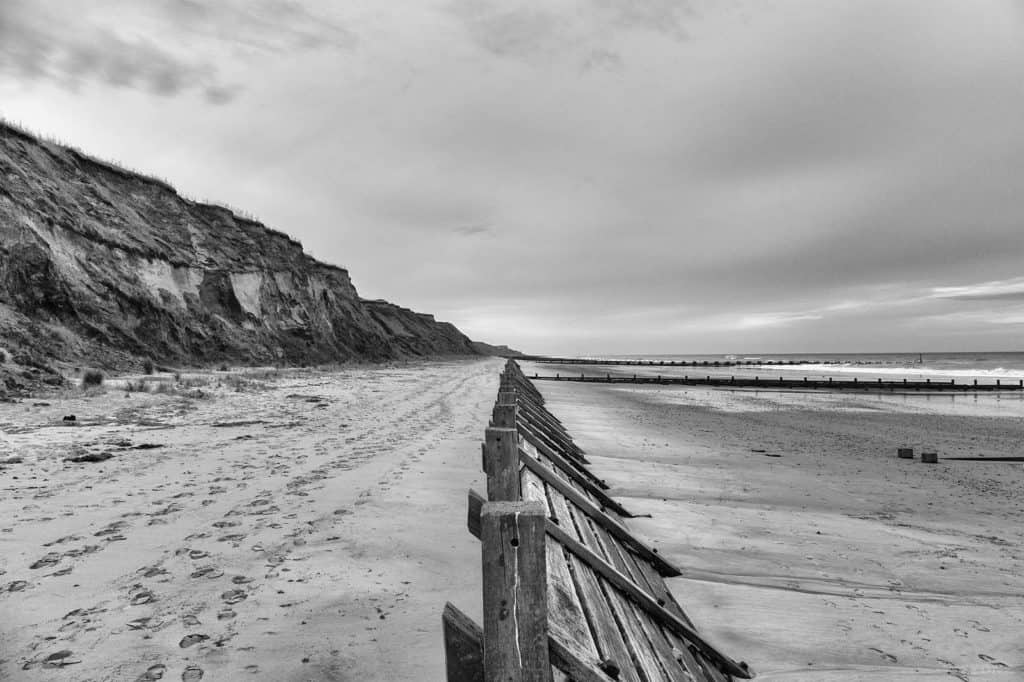 The beach is typical of this part of Norfolk. These are the edges of Doggerland, hacked off and bitten away by the sea. When the tide is out the beach is wide and sandy, scattered lines of pebbles. Above it soft cliffs of glacial mud, alluvium and clay slump in slow motion. The sequential deposition of these are visible if you look at the numerous water-bound cliff falls even for a few seconds. It’s one of those bits of landscape in section where you can walk backwards through a few thousand years using your fingertips, see the layering so pronounced in places. This clay moved in vast toes pushed by ice and then dumped, all overlain by alluviums put down as the ice melted, sands and muds forming in pools on top.

Unusually the sea defences are in good condition, the spine of wood runs the length of the gas site and is; unlike further down the coast around Happisburgh; largely intact. Currently new private defences are being laid here. Fossil fuel suppliers are protecting their best interests from erosion. The level of irony rises faster than the waters. Here, a fossil fuel distribution centre is protected from rising sea level and increasingly unpredictable weather patterns, caused by burning fossil fuels that are distributed from well, here. The sand is higher than I remember it against the defences as a child. Wrapped in towels, we’d lean against the wood and metal driven down into the sand. Now they are only just on the surface in places. It’s all part of the fight to try and counteract the chewing of our eastern edges. The bitten material is churned and then pulled away, dumped further along the coast helping form Blakeney Point and Scolt Head Island. Over the centuries this sand has gradually choked the old rivers like the graven and Stiffkey that drain North, building the salt marshes we know so well half protected by their wall of sand and shingle. Now gabions grow out of the cliff base, they’ve brought in stone from elsewhere to fill them. Diggers in a Christmas idle huddle together on the access slope, cover sheets whipped by the wind. 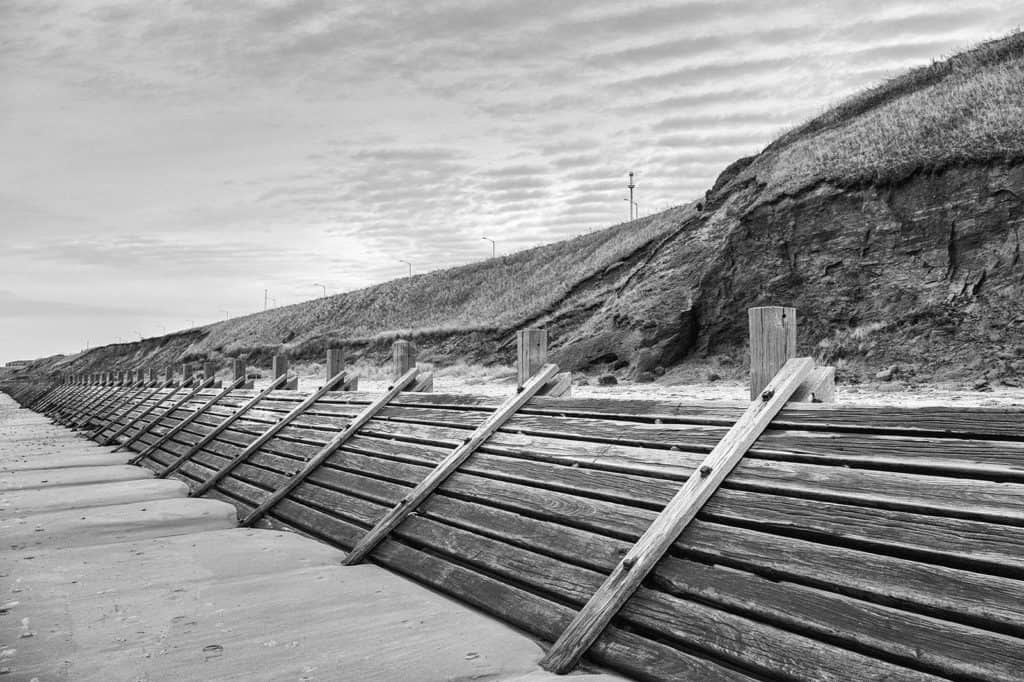 The beach below the tipped spine of wood is wet, still pools forming and bleeding out as the tide ebbs. We walk behind the breakwater to save our feet. It’s gloomy in the winter light in this canyon between the wood and the low cliff. Taking photos here is a bit of a risk. The Terminal is quite fiercely guarded; out-turned anti-intruder fences, wire, dogs and police. I’m suddenly conscious of cameras on poles that appear to turn and follow us as we walk, whether they have be tallied up with a number plate from a missed turn earlier is open to question. I’d love to get in there and have a proper look, all that metal and pipework to record.

A friend worked here in the early nineties. At the time she was having a relationship with someone who had worked on the site and then gone abroad, he came over in a Dutch plated car and had visited the site just to see if it had changed from the outside, see how it balanced up with the memory. He drove the five miles back to her house. Later they were disturbed by a knock at the door, two policemen standing there having somehow traced the plate back via his company to her house curious as to what he’d been doing. You have to watch yourself when you’re being watched yourself. 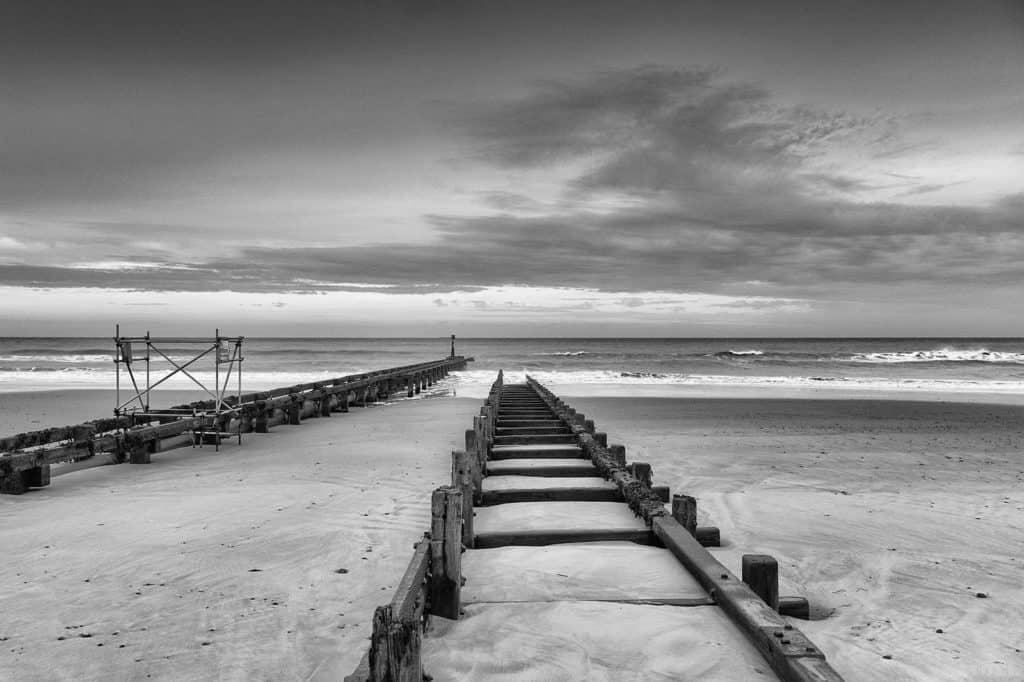 As part of our fossil fuel supply it is not just a threatening overwatch, it also perceives its own threats. In the 1970s and 1980s at the height of the mainland bombings by the IRA it would have been a prime target. On top of this there were locally frankly terrifying rumours and stories about what it represented in a Cold War context. As part of our energy infrastructure it would have been a prime target had anything ever turned hot. It would have been a blister as hot as the sun in minutes and it was only a few miles from where we lived. And when you consider it in that context it was just one point in a local long-list including the likes of Sizewell, Coltishall, Sculthorpe and Neatishead in a county dotted by Thor missile sites and cruise missile silos on airbases. So many points of attack on infrastructure, energy, defence, intelligence, centres for population and ports. This all at a time when the stately drift of the Туполев Ту-95 was a daily occurrence, these huge planes patrolled the edges of our exclusion zone, backwards and forwards constantly traversing out of sight over the curve of the horizon. And for us? Just the unfocused rumble and occasional distant silver glint of the Coltishall Lightnings heading out to shadow them on our side of that illusion of a line between the blue of the sky, way past our sandcastles, shrimp nets, egg and cress, and ice cream.

Thanks to Comrade Reg at Soviet Auto Luxury Tours for the map. 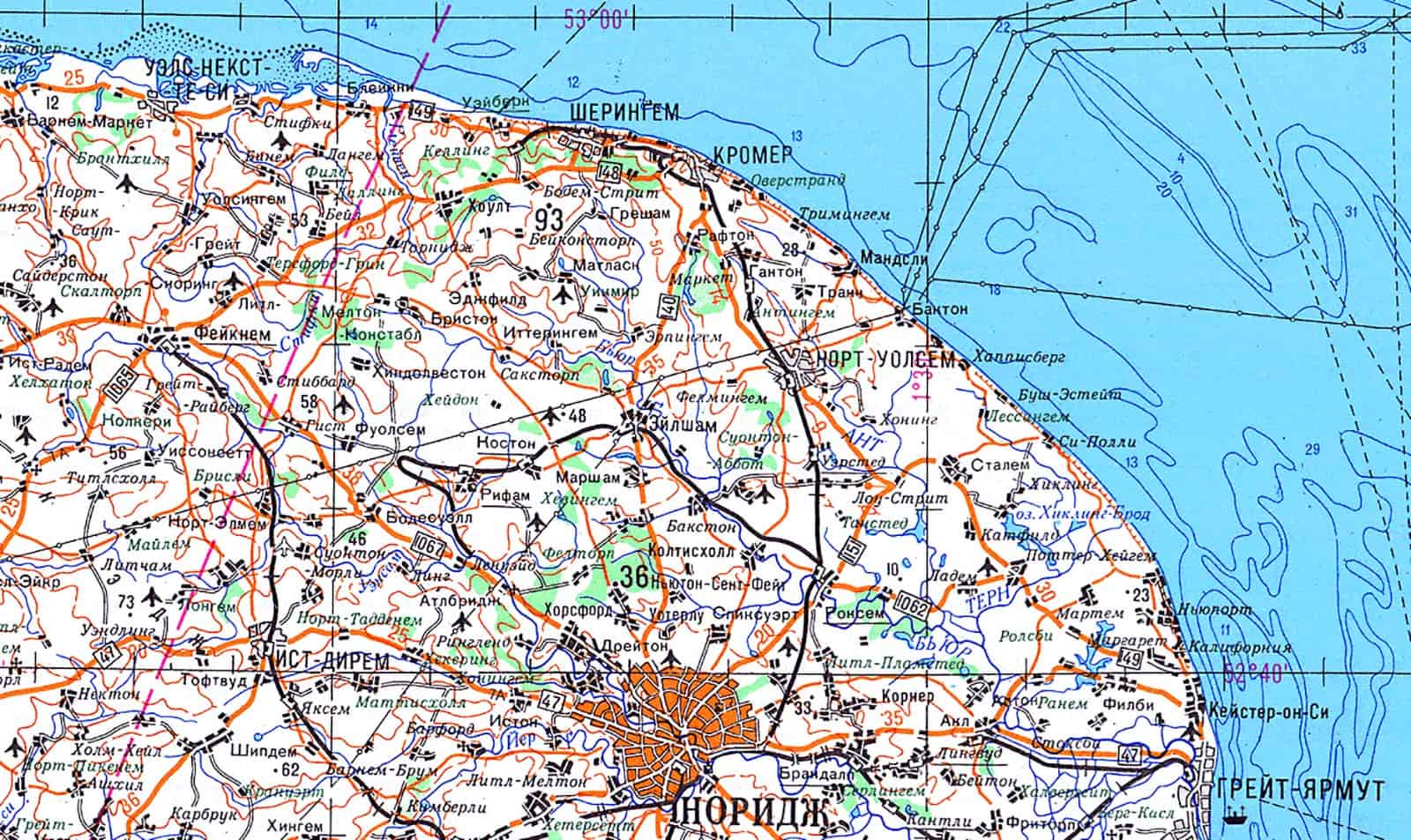