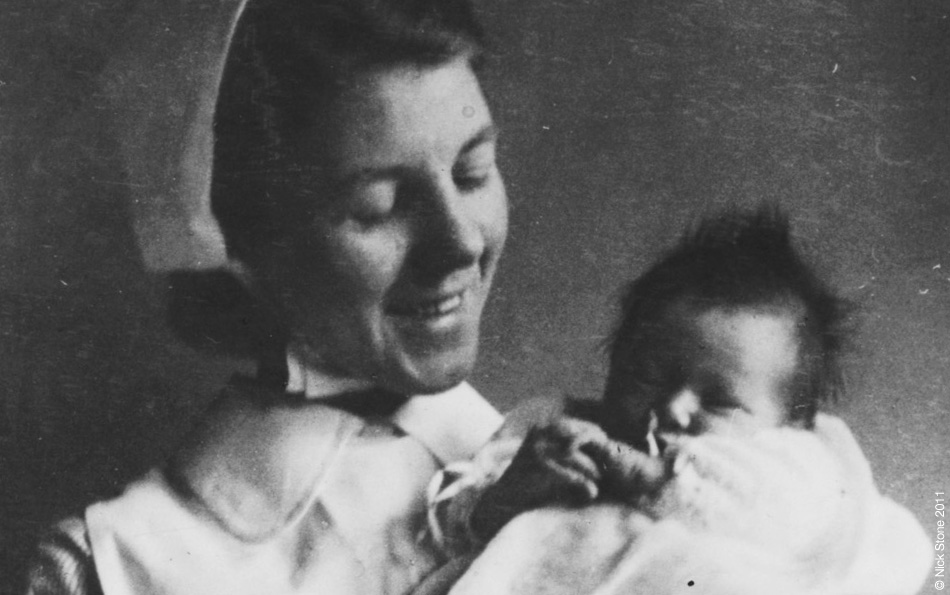 I’ve microblogged before about this on Flickr years ago using some family photos that belonged to my mother which you can see scattered about this page. The Health Service is quite important in our family. This was particularly true for my mother, who was involved from the start at the sharp end before the NHS even existed. This is mostly about her and for her, because I’m proud of what she did and how she did it, it’s an important facet of our family story.

Grace Margaret Parr was born in a two-up two-down in Cowper Road in Cambridge of working-class stock. Her father Percy Parr had escaped the almost inevitable male jobs in the Parr family, an agricultural worker or possibly building the railways. He Joined the Cambridge Militia at 15, and The Cambridge Suffolks (4th Battalion)  before transferring fairly quickly to the Royal Fusiliers, he spent the turn of the century in Khartoum in the Sudan, finally leaving the army and joining the Reserve in 1907. Percy Married my Grandmother Jesse Northrop the same year, He became a building labourer, They weren’t quick to have children, but had three close together, Thomas, William and my mother all within three years. William, so the story goes died the day my mother was born, this barely a fortnight after the outbreak of what would become known as the Great War.

Her father was called from the Reserve, survived for two years before being killed near Messines in Western Flanders in June 1917. She had only one memory of him, a big man in uniform singing to her and bouncing her on his knee. Her mother eventually remarried Alf Ireton, himself a veteran, another working class man, a woodsman, and had two more children, he bought Tom and Grace up as his own. At 14 Grace left the local school, I suspect she was probably a truculent and straight-talking teenager if the adult is any measure of the child. She was informed by her parents that they had found her a place in service, she informed them she was going to be a nurse. This might not seem odd these days, nursing is a profession we have become used to seeing as an option regardless of background; in the early 20th century it wasn’t, it was much more the preserve of the upper and middle class, it cost money to train, but she had a plan. She set to work at Eaden Lilley the haberdashers in Cambridge and saved, and saved and saved. She eventually set of to the James Paget in Lowestoft with enough money for her uniform, her books and fees, she enrolled. She trained on and eventually achieved her “Midders”, making her I believe an SEM. 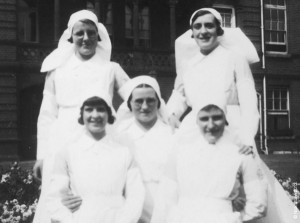 So we have a working class Midwife in the 1930s. It seems from what I can glean that she moved to London, there is evidence of Kensington being one port of call, but more importantly she worked in Leyton, Hackney and Walthamstow; important for two reasons. Firstly she met my dad who came from Leyton and secondly because this is where she saw the realities of health for the working class, how the poor were treated first hand over and above her own experiences as a working class child in Cambridge, a child with Scoliosis who’d been strapped to a board for months.

It fast becomes apparent that we are dealing with a different set of principles compared to either “Call the Midwife” or now. It’s no a subject that she needed pressing on, a talkative soul at the best of times, she had to deal with people who had not had any care up to the point of delivery often living in squalid, cramped conditions in the maze of streets in the East End of London. Regularly she’d arrive and there would be a problem, women who were presenting breach, or delivering twins where nobody actually knew about until she arrived and told them. I well remember her books too, the appalling photos and illustrations of what could go wrong and how to deal with it which scared the living daylights out of me as a child; how to deliver a baby for a women with syphilis, how to deal with still births and defects. Delivery without equipment over and above what you could carry in a bike basket with all the dangers and most horrifying of all, a bill from the hospital at the end often a bill that nobody could afford.

As my mother died in 2003, my sister talked about her experiences briefly on “Before the NHS” on Channel 4 last year, you can see the excerpt here, they got mum’s name wrong, which was a slightly annoying slip, but it at least gets over what the problems were and the three programmes were good, because they outline exactly what life was like before we had a National Health Service, for the poor, the marginalised and the sick, disabled, and elderly. This in an age where the rich could afford what they needed and the poor could whistle for it an age we could see returning if the Conservatives and their vested interest in profit from healthcare get their way.

She went on to train as a Nurse and in between having children and moving around a lot with my dad ho was in the RAF continued to dip in and out of working for the NHS, she was proud of it too. I was born in one of the hospitals she worked in while they were stationed at RAF Stanmore, Edgware General, remarkable in itself as we were what I believe is termed a geriatric birth, she was 51, I was conceived of ‘Guinness and lazyness’ apparently, there are worse ways to be made. I suspect my late arrival may have been considerably more difficult had it been 30 years earlier or indeed in 20 years time the way things are moving. 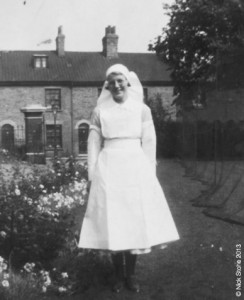 I suddenly realised earlier my mum would be angry about the way things are changing: We now live under a Tory led coalition government with no mandate to do what they are doing to services. They are at the controls of the current blistering series of attacks on the NHS ‘failures’ with the Right wing media including political editors at the BBC almost entirely in cahoots. Cameron’s ringfencing of the NHS is pretty much a bare-faced lie, the money may be there, but front-line staff levels have dropped dramatically, beds and A&E have been cut, whilst accountants and managers are paid to prepare the service for carving up. You only have to look at the number of government ministers and MPs who have interests in private medical companies to see where this is going. It is also worth knowing that the policy of Post-Thatcherite privatisation is to “sell abroad”, making renationalisation much more problematic. Labour are by no means blameless in this either; the effect of PFIs (Private Finance Initiatives) owning our hospitals and renting them back to us whilst pocketing the immense profits funded by the tax payer.

Doubtless some people will read this and say what about the cuts? think on; the NHS was created at a time when we had far worse debts than we do now, including war loans, in a country that with damaged infrastructure. The creation of the  NHS is one of Britain and us as a nations most commendable acts; free healthcare for all at source, no matter who you are or how much you earn. As for the cost of it, if we need to save money sack some accountants and middle management and negotiate our hospitals back out of the PFI penury, tax teh bankers who we gifted so much to. Anything rather than the hideous and ultimately vastly more expensive US system getting a foothold. We need to protect what we have before we don’t have it anymore, before we end up back in the 1930s with healthcare limited to those who can afford the insurance and charitable foundations or sickness and death for those that can’t. 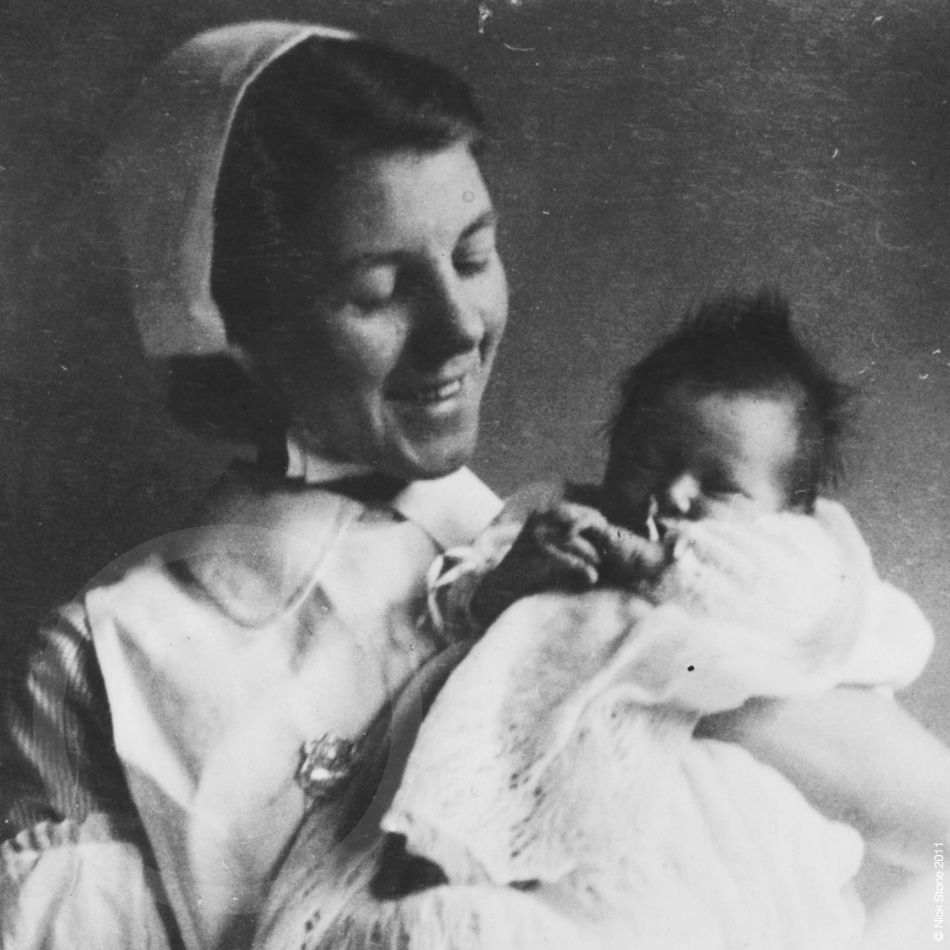 You can read about her other half here. And more about here and her mum here.