Not everything is as it seems, and as you drive towards Hoveton from Hainford there is one of those odd little places, this is All Saints Church, it’s separated from the uncentred village as it stands today, but isn’t the site of a deserted village, rather the church was left behind, a new one erected, the buildings roof stripped and it was left to rot stuck out on its own. And my god it feels lonely on a freezing day, terrifically atmospheric against bone-chilled white fields even viewed from a car which would probably have been a sensible option having spent an hour sliding down the slopes around Hautbois, Badersfield, Coltishall and Lammas looking for tree-lines to photograph in the snow I stopped here as a last port of call before going somewhere sensible like home.

The building dates to the fifteenth century, according to Simon Knott and Pevsner the tower going up at the end of the century, it is the only part left standing. The church was abandoned when the Victorian Church of England decided to build new churches closer to the flock. Curiously it has a small mortuary chapel built on it which has now also gone, but would have acted as a place to assist when holding funerals which still take place here even now. 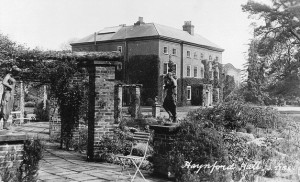 It is a curious area, Hainford Hall not far up the road forms the centre of an estate that I believe was held by the Bulwer family who also owned Heydon to the North of Norwich. Sadly now a plain-faced, blanked eyed ruin gradually collapsing even though it’s listed, the name is now more synonymous with car spares than any sense of the history of the place. In the 1980s the office was in the front of the hall as far as I can remember, in a room lined with Dexion shelves of alternators set against dusty mote sifted stucco. The former gardens consisted of teetering piles of cars, you’d enter with your spanners and sockets and take off what’re bit you needed, in my case my final trip was a passenger door for a Mk1 Vauxhall Cavalier. The hall like the church standing there bleakly.

I traipsed round the back of the church across snow over mercifully frozen mud to try and find a treeline, failed to locate a nice one but as the cloud closed in and the snow started to fall again grabbed a quick shot of the church and ancient field boundary the tower with its coat of ivy and missing corner sticking up through the crown of trees, then headed back to the car putting the heaters on full.