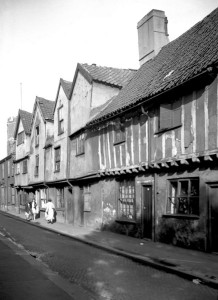 It’s not exactly on Magdalen Street; it was behind it on the East side, a lovely little round tower enclosed by Peacock Street, Willis Street and Barrack Street. Until the 1860s, half timbered tudor houses stood on all sides, these were condemned and replaced by apparently faceless Victorian terraces which with the benefit of being now we consider quite nice. Barrack Street retained some of the old stuff right up until it’s demise. The Inner link Road cast a long shadow, particularly over the North of Norwich, bisecting Magdalen Street as it does, the slope shuddering to a halt at the roundabout, before speeding off along the carriageway, we drive through ghosts of not much more than a track lined by collapsing slums, now broad and lined by St James hill and the development on one side and the large Jarrold site on the other, former council houses evaporating in a dream of a new business quarter ten years ago, it still sits there, a giant car park with a profusion of Buddleia, Blackberry and Fireweed grow at it’s edges. This was once alive but impoverished, vibrant quarter of the city, A Barracks, The Spitalfields, higgeldy-piggeldy houses right up to the city walls and the flow and bustle of Magdalen Street a mere dawdle away.

Unlike the other churches on Magdalen Street St Paul is a contemporary loss. It’s fate sealed in April 1942 when the Baedeker raids came, incendiaries punched a hole in the roof and the church went up, the dry old wood catching easily and in those moments of choices there were other concerns above and beyond a twelfth century framework of an underused building where the resources were stretched so it burnt. The shell remained, the tower standing; a backdrop for city life much like St Benedict, Westwick and St Bartholomew, Heigham; a reminder of what had happened on those awful nights in 1942. 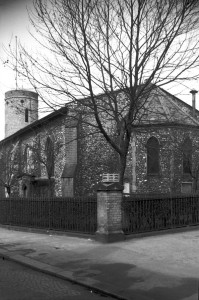 It took the powers of The Corporation to finally remove the church entirely, specifically Herbert Rowley, Norwich City’s Chief Engineer and his minions. It could have been rebuilt as St Julian was, or made safe and left as a symbolic curiosity or folly like St Benedicts, even just the tower. Yet of course even in 1945 it’s fate was probably already sealed in one of the various options that gave us the Link Road, the fevered glittering imagining of the ’45 Plan’, so in the late 1960s and early 1970s not content with the flyover chopping an ugly suspended concrete wall through Magdalen Street, demolishing Stump Cross and all the Regency and Tudor buildings that surrounded it, replacing it all with a glowering brick block and the glittering glass walls of Sovereign House, they also demolished what was left of St Paul. The burials were moved and all evidence that a church had stood there removed, now a name and the old stone cemetery wall on the West and North sides are the only sign that this small children’s play park was once a medieval church and centre of a community.

Curiously St Paul appears to have been more than a church; originally a hospital for the poor, strangers, vagrants, and the ill. Founded between 1118 and 1145, it served this purpose  before even the Great Hospital, drawing the name Norman’s ‘Spital from an early monk and master. By the sixteenth century was being used as a Bridewell, for a short period until William Appleyard’s old house in St Andrew’s, now The Museum of Norwich at The Bridewell. It was Dedicated jointly to St Paul the apostle and St Paul the first Christian hermit, the church was of ancient foundation; the lower part of its round tower could have been of Norman origin, the site could be older. This all sounds like it’s very important, but actually the list of repairs to it and the lack of use on and off over the last three centuries of it’s life really tell a tale of a parish church that wasn’t much used including it being described as damp, green, waterlogged and ‘wretched’ at various points in time. But then if you look at the number of church survivals in the area even now, St James in particular is only at most 100 yards away on what would have been the other side of Barrack Street and is now a traffic island away housing the terror of puppets and raked seating for the last thirty years or more. St Saviour on Magdalen Street not much further if any, and it was of course in close proximity to the Cathedral itself. Some vague relics do remain, of the three bells that the tower once housed one went to Postwick and one went to Witton, I assume they are still there. We are of course also lucky that George Plunkett recorded it over several different time periods of the very last years of its life, some of which you can see on this page, there are further photos of the interior on his website to peruse. And so it goes out of the Fire of the Blitz, via modern redevelopments we have another place name that reflects 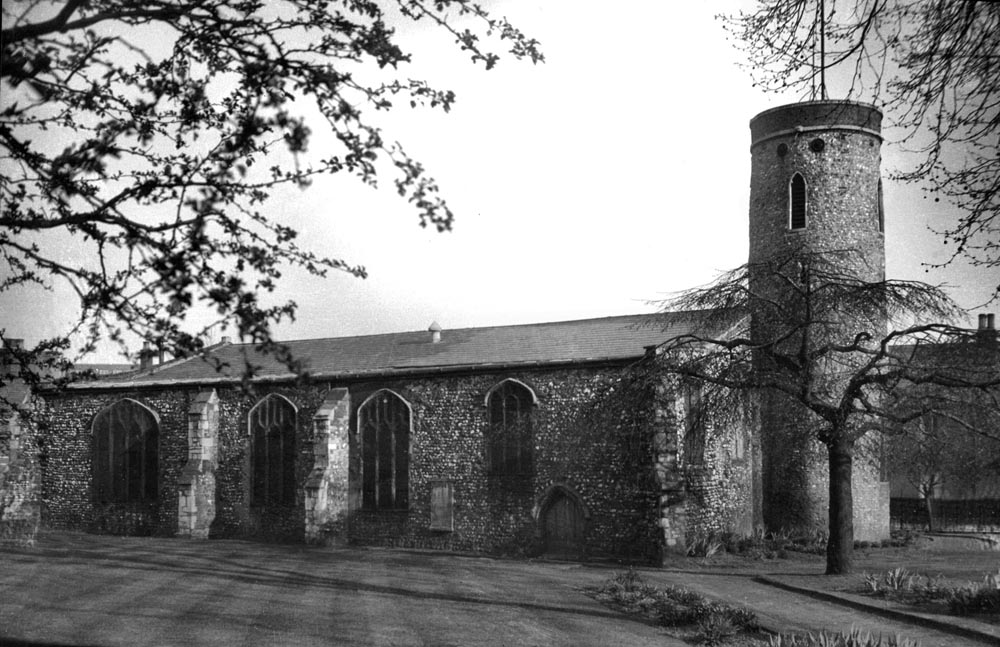 George and Jonathan Plunkett at Plunketts