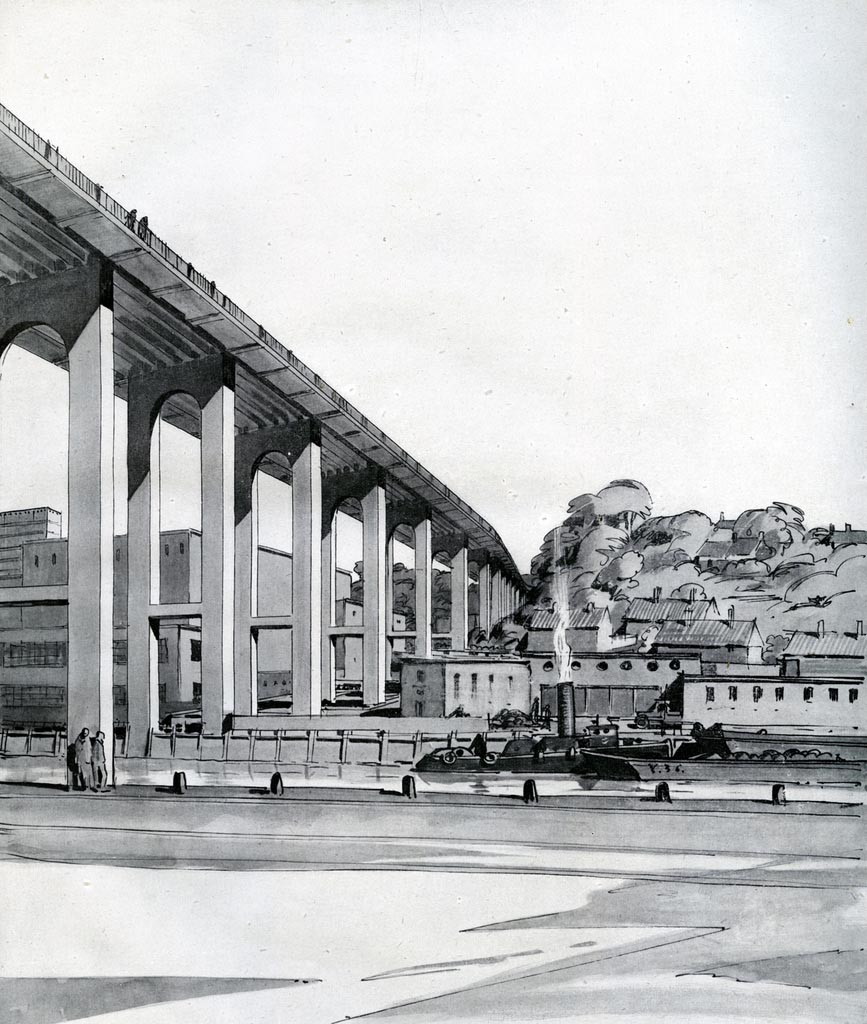 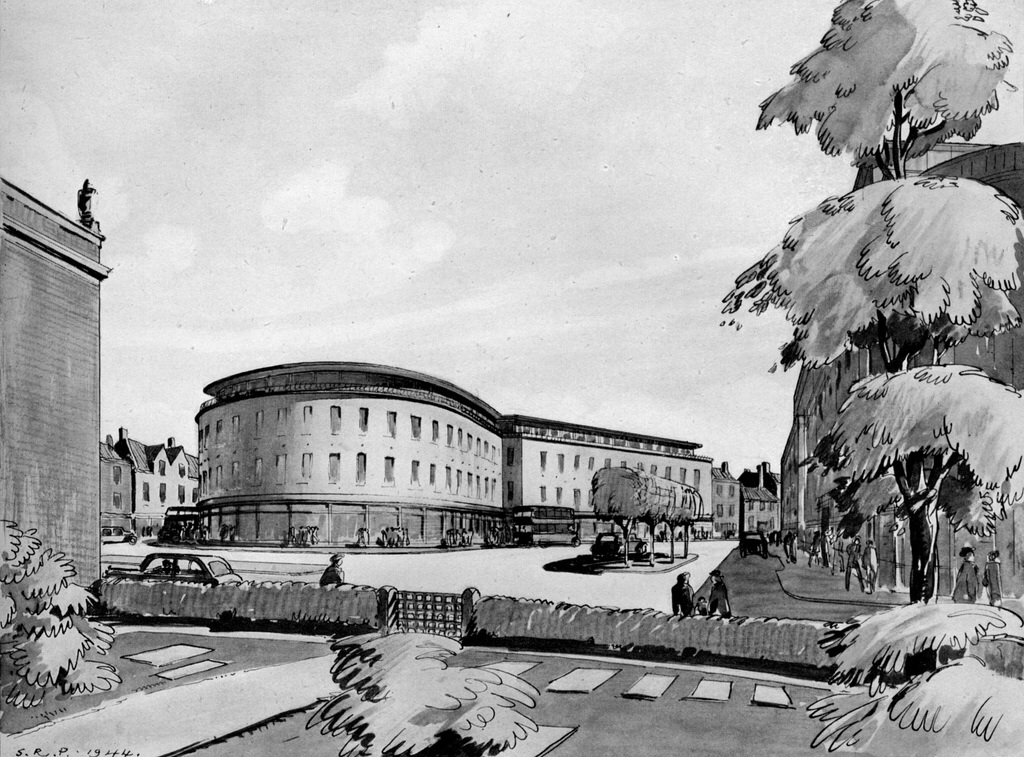 After the bombs had fallen wrecking a large area of the city centre and indeed laid waste to a huge amount of the city’s housing stock around the fringes of the city and out into the Norfolk Countryside, The Corporation started to explore some brave new ideas; these were formalised in the production of the 1945 Plan, this large book outlined most of them. How you put a city back together as a modern European city, extravagance of the imagination was affordable, whether building it all was possible was another matter entirely, as you will see some of it didn’t happen, some half did and some pretty much exists, there are also liminal signs of it in our streets, and you can see the intentions quite clearly below, both the pleasure of success as with the rebuilding of Bonds, or the near misses that give us the strange world of St Stephens, and we have the benefit of being able to look back at the future imaginings that didn’t happen, beautiful and well intentioned. The illustrations are S. Rowand Pierce employed by the city architect to visualise the new metropolis. 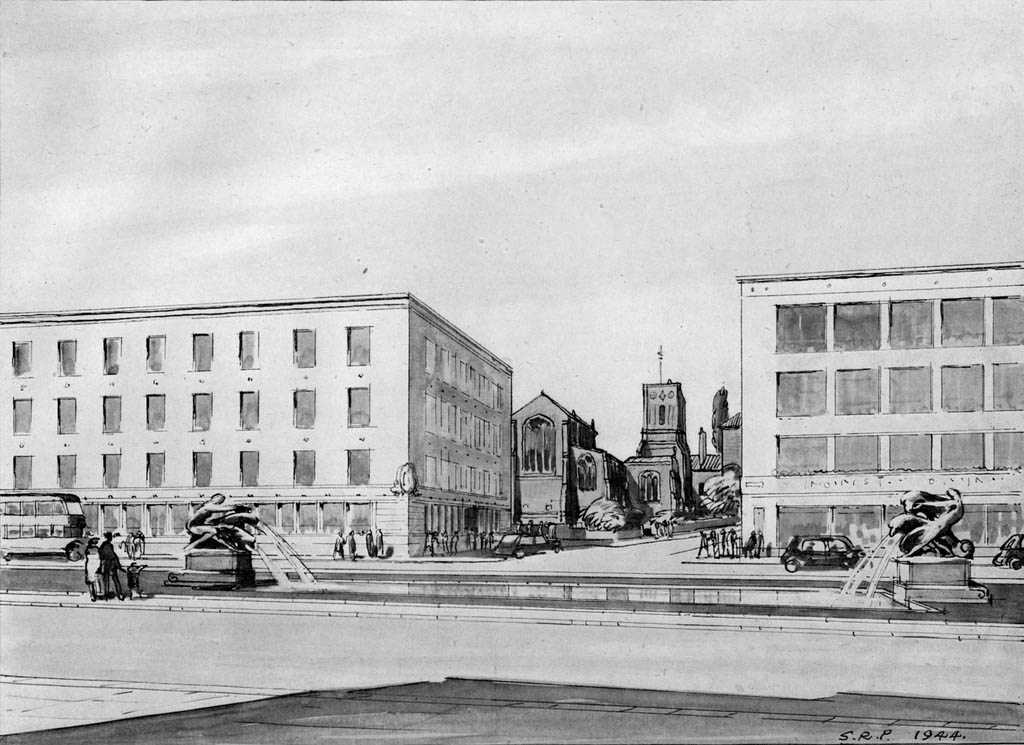 Imagine a widened plaza, you are looking at the corner of what might become Marks and Spencers on the left and what could eventually be Debenhams on the right, In the centre is Rampant Horse Street (named after the hotel, named after who knows what) with St Stephen’s Church smack in the middle, In our version of this future M&S and Debenhams are much closer to you, the Plaza doesn’t exist (we have one of those outside the Forum instead which in this reality isn’t there nor is the library it replaced). Of course in our future from 1945, the Church marks one of the many entrances to the Cathedral of commerce that Chapelfieldhas become.

To quote the book: Looking West to St Stephen’s Church. The opportunity here presents itself for decorative treatment with grass, water and sculpture. 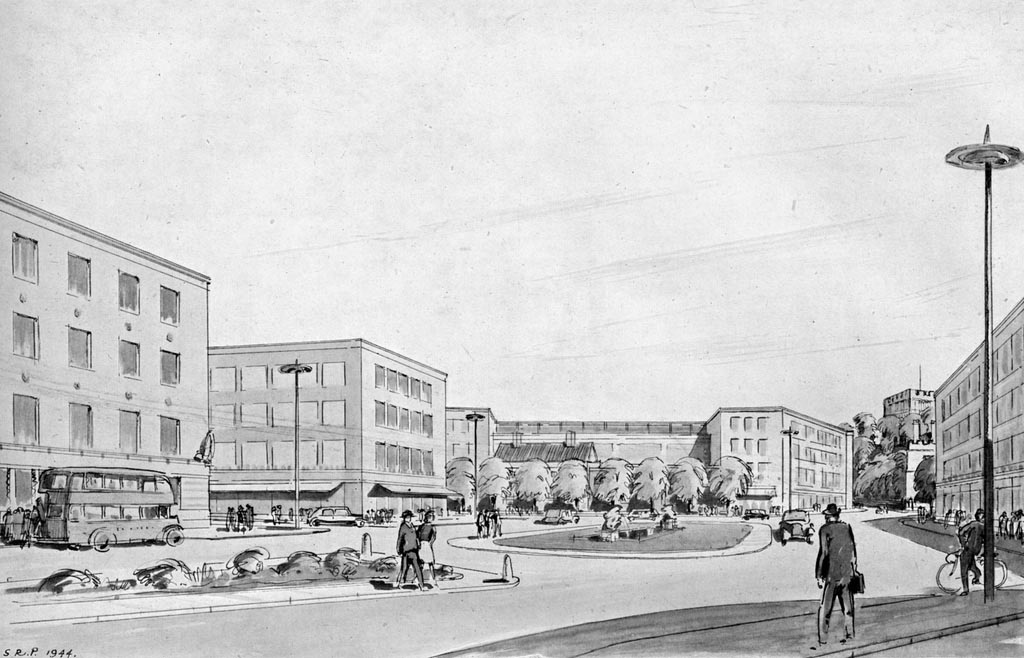 Again how it would have looked considerably widened, you can see that Orford Place itself, it was a reasonably large tram terminus up until it vanished under a bombing raid, planned to be quite huge, as it is, it is really now nothing more than a tiny cut through that comes out on Gentleman’s walk, White Lion Street, The Lamb, freshly opened up to the world is retained, and The castle can all be seen on the Right. Debenham’s would have been a lot narrower. As it is it in 2012 “real now” it cuts over a lot of Orford Place and Red Lion Street. The maps indicate that St Stephen’s Street was intended to be wide as it in fact is, St Stephen’s also gives you a clue as to how horribly wrong a lot of this could have gone. This may have worked with 1950s traffic, but now it would be like Coventry City Centre was in the 1980s. 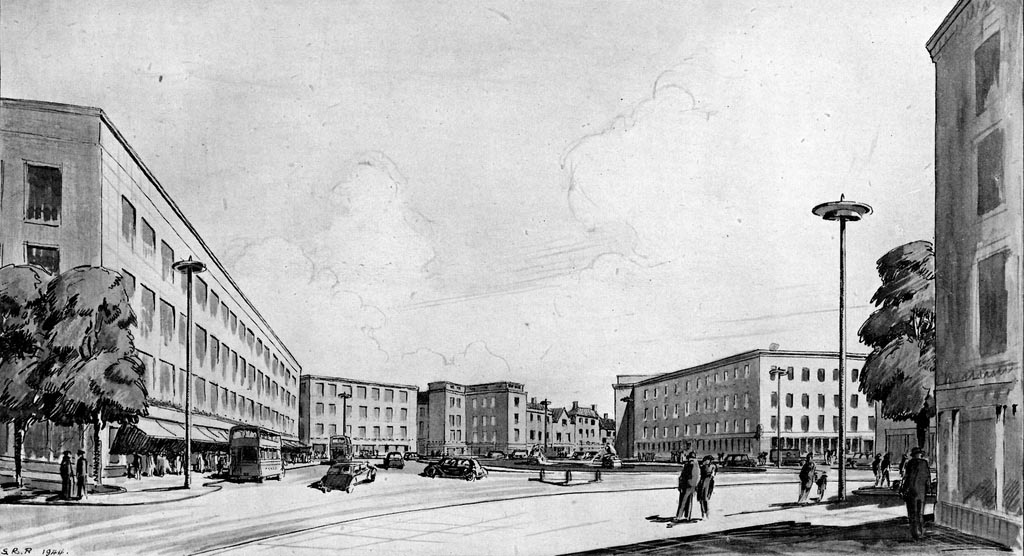 Yet more visionary stuff, The author indicates that the building are to indicate scale, not style, which is just as well possibly, this one is looking towards the junction of St Stephens and Westlegate, some retention of older buildings on the bottom end of St Stephens, this didn’t happen. St Stephens entered the post war period with a lot of fire damage consequently it was marked as a area with little of remaining architectural interest and one whole side was removed and entirely rebuilt much further over giving us the wide parade of shops it is now. If plans go ahead in future we will see further changes to it as council open up access to the bus station via another plaza, time will tell on that one, yet more future visions for someone else to look at. 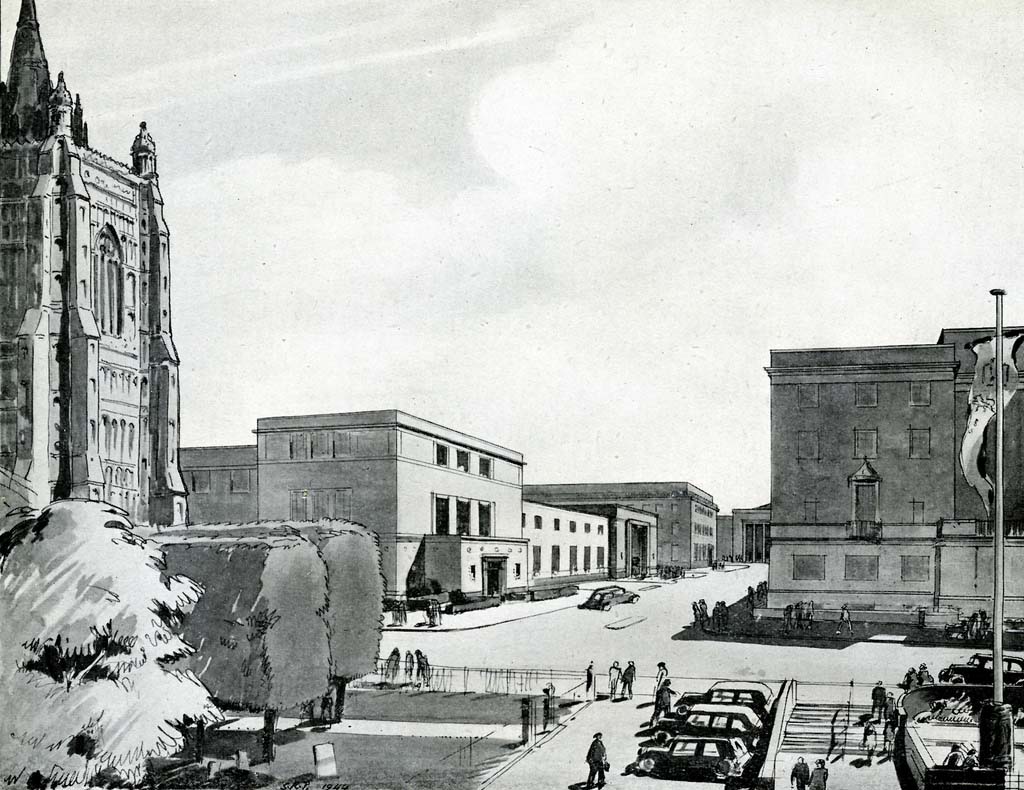 The new civic centres of Norwich

These don’t exist, although we do have a rather lovely glass forum type thing there now, which is nice. That’s Peter Mancroft on the left, City Hall on the right. City Hall was in fact never finished either, one whole wing is still missing facing St Giles, money being what it is. 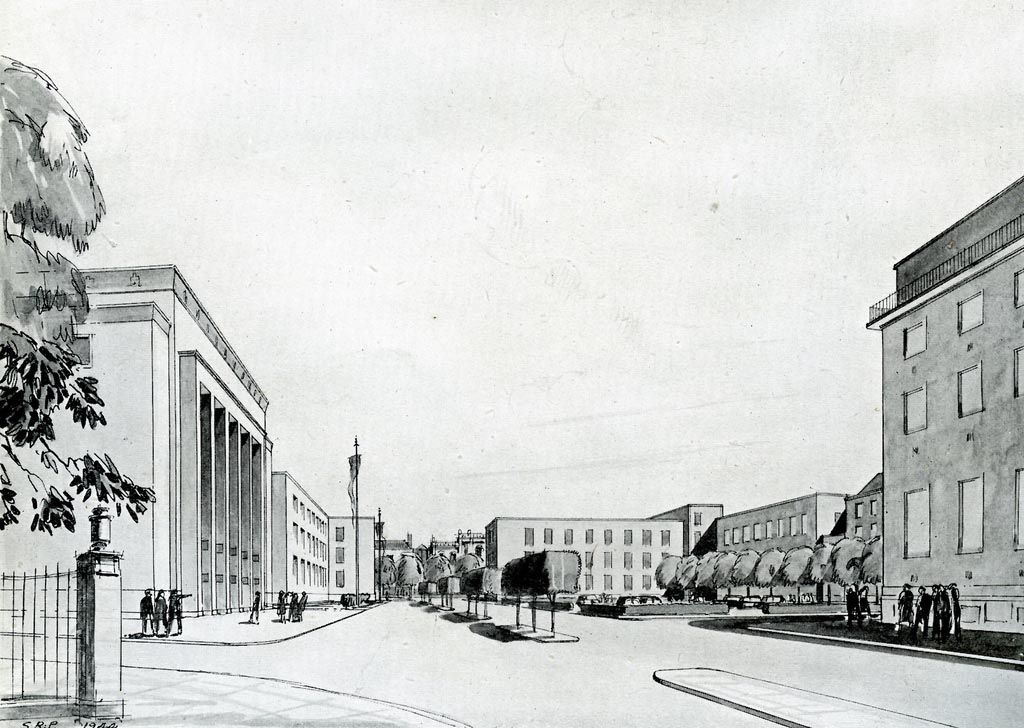 Looking down a road that doesn’t actually exist, it’s sort of where Little Bethel Street is, but cuts right through to St Giles, St Giles Church is obscured from view by the New assembly house which is on the left. 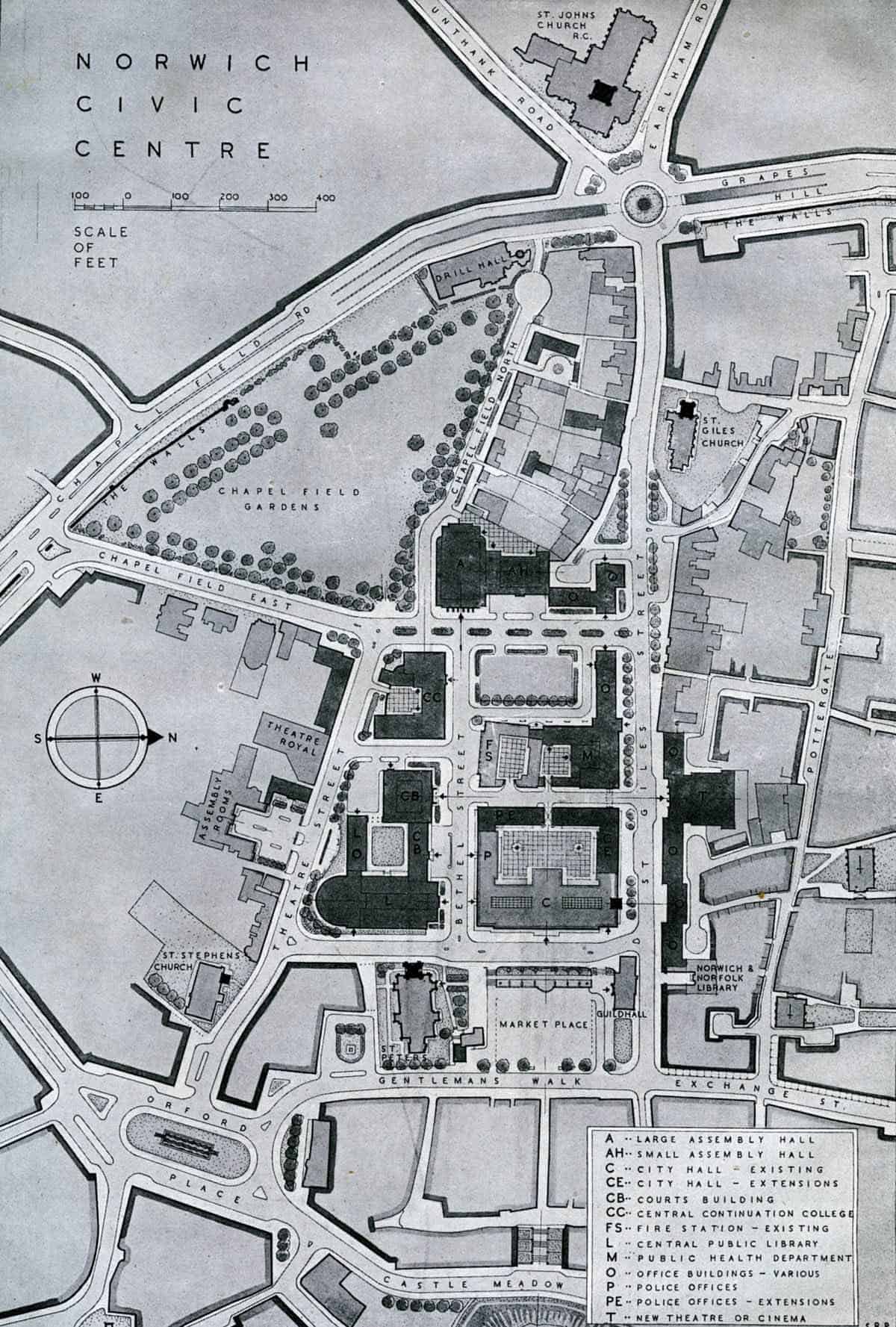 How the Civic Centre of Norwich will look by the time we get to the 1970s. Only it didn’t, This Map explains the previous two illustrations rather nicely, you can see the wide boulevard that we don’t have. 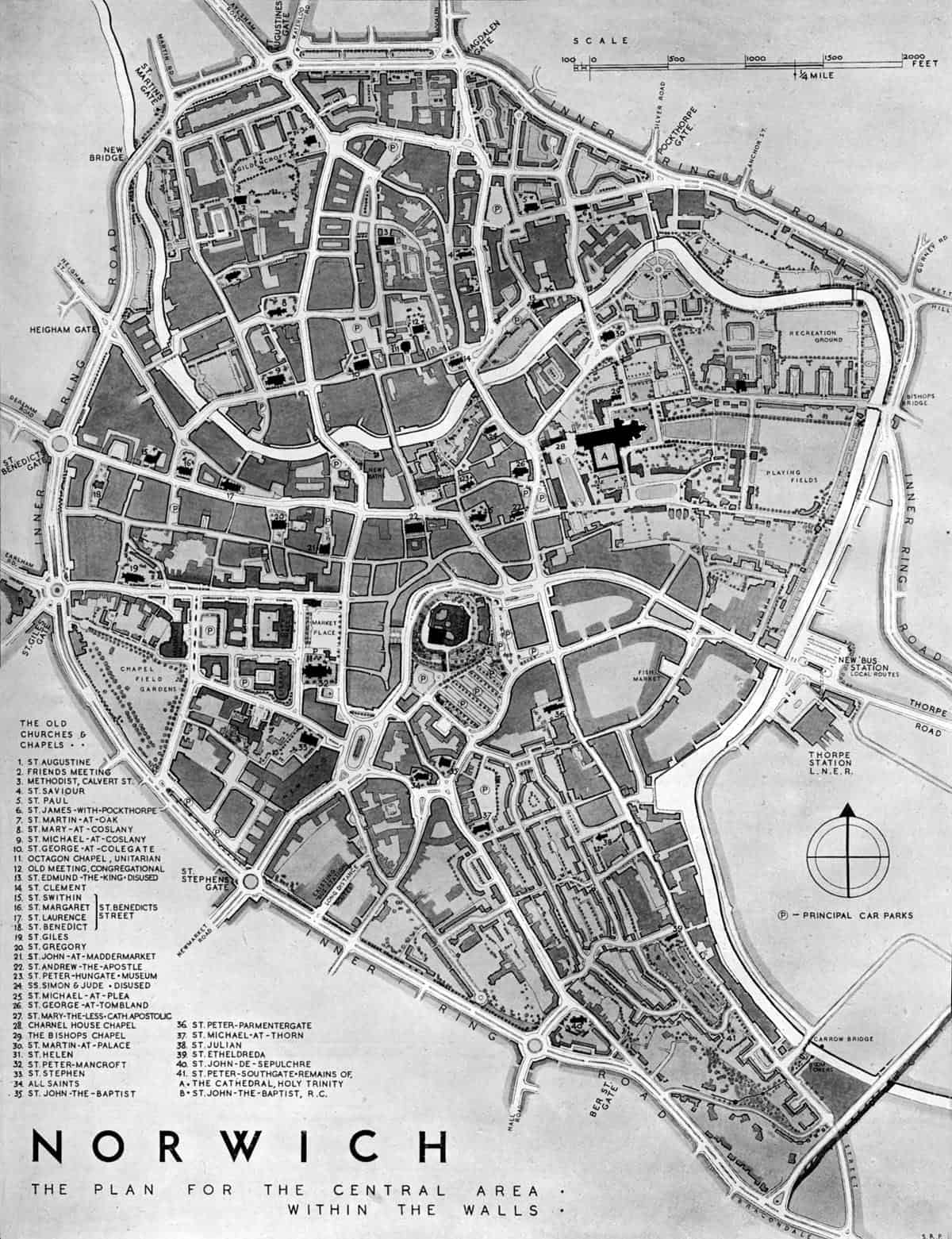 The Plan for the central area within the walls.

This is the general projected Map of Norwich as it would be now, had they done what the Corporation wanted to do. As you can see it involved a quite different Ring Road, and an enormous amount of demolition and rebuilding of the Victorian housing stock more of which I’ll write about in another piece in future. 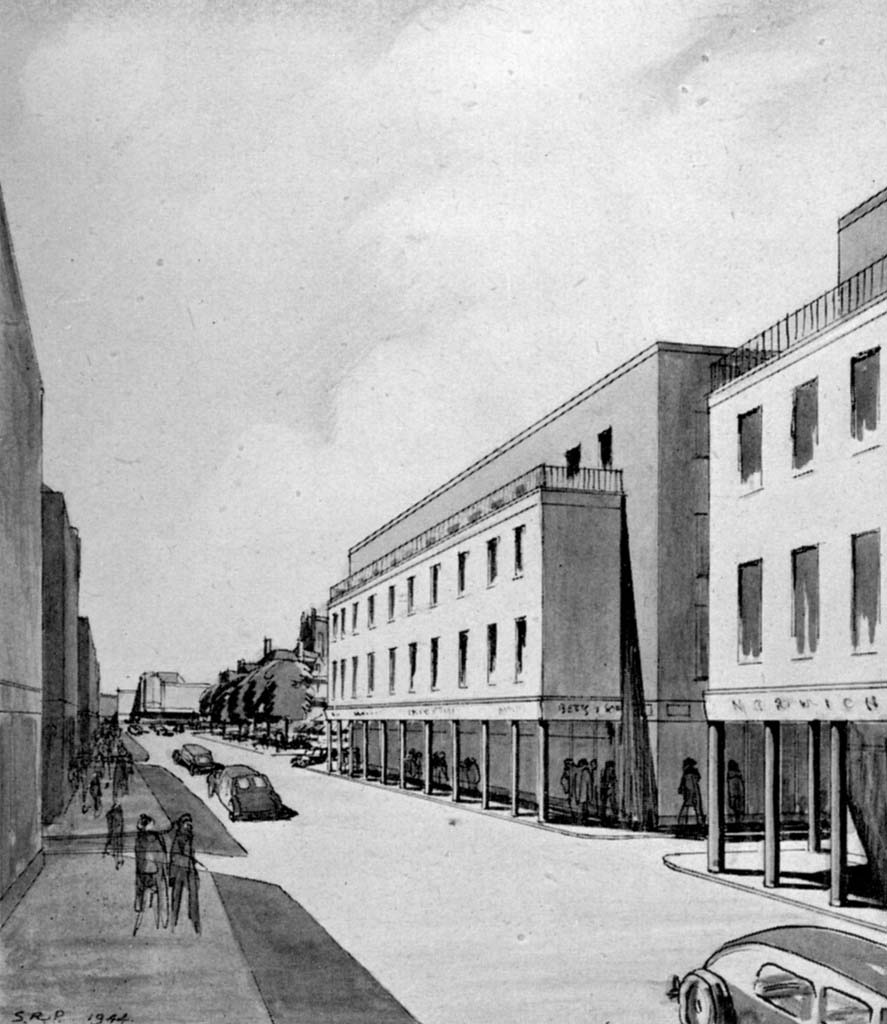 This looking up Gentleman’s Walk, That’s the Garnet Wolsey, leading on to Briggs Street, the market has vanished and not instead been given a makeover that is questionable. 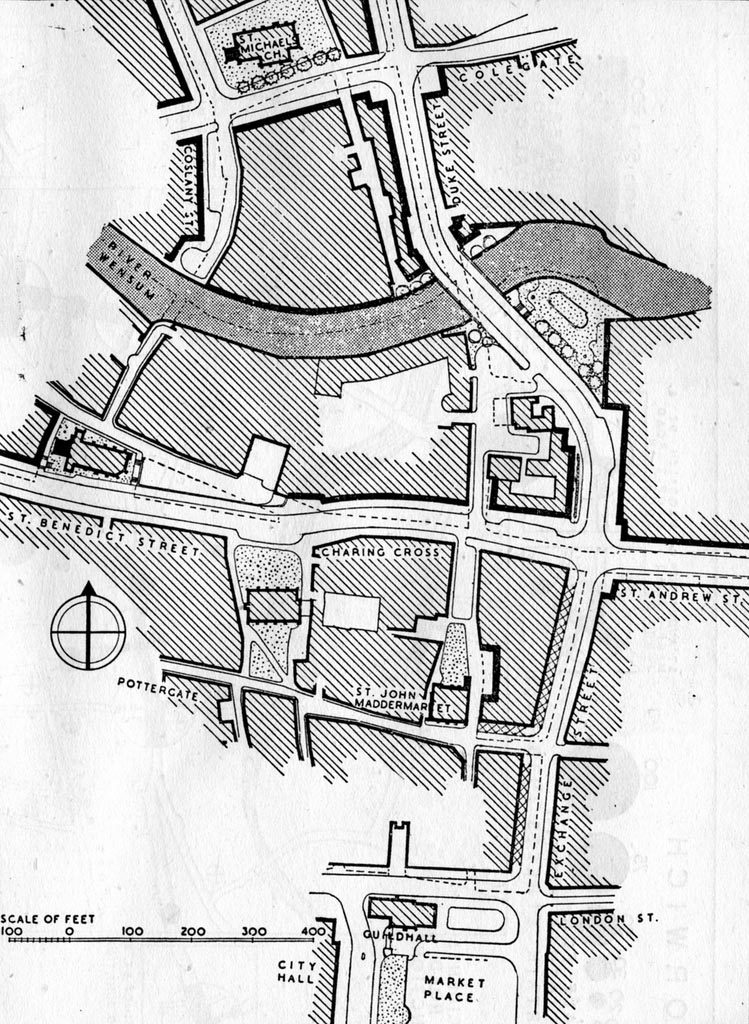 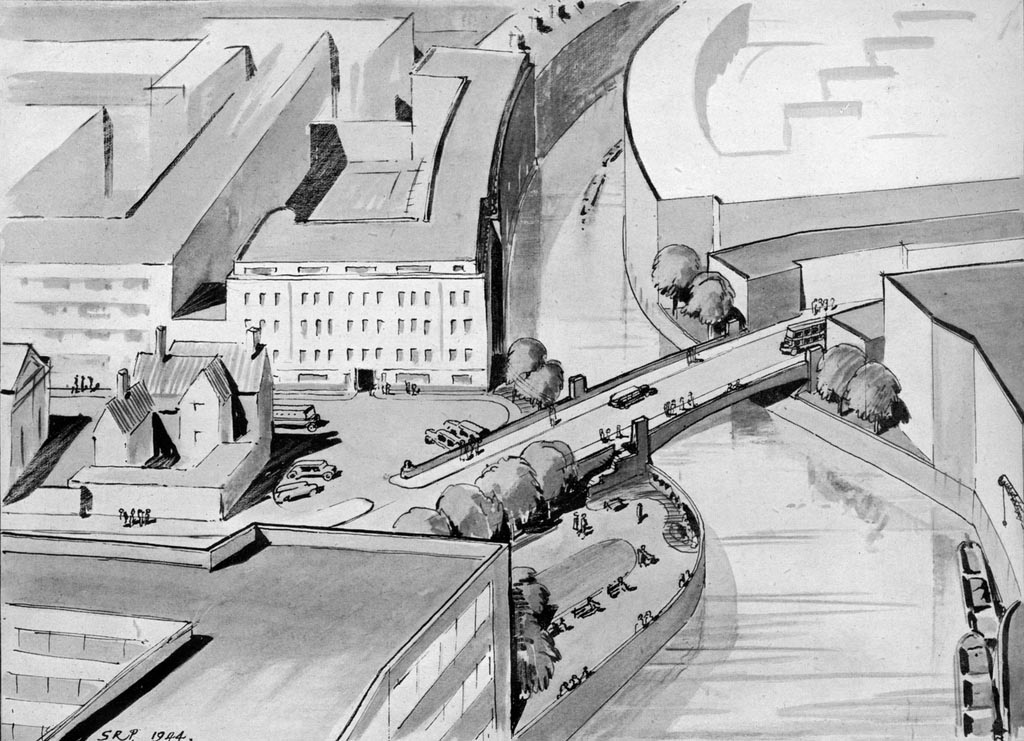 Exchange Street and Duke Street: You get the gist now of the illustrations of Duke street better once this map in your head. From the book: Duke’s Bridge is at present approached from the extremely dangerous crossroads… The plan proposes a direct approach from the bottom of Exchange Street… and a new bridge, note the preservation of some of the older buildings, also note the space allowed for everything.. Make’s sense, costs lots, didn’t happen.

Apart from the giant fold out map this bit is possibly my favourite bit of the book, a stalled plan of some grandeur. In various people’s heads this was a great idea. In my head now, it looks pretty cool. The idea was to have this as a link road, it would have looked grand, then the lime would have leeched out of the concrete and it would have gone a bit stripey, and those two chaps on the left would have pulled some cans out and sprayed “SHOOK” all over it. Then in that reality, I would have taken photos of it with hideously wide angled lenses looking all urban and buggered, and people would have tutted at it. Most of the units under it in our reality would probably be empty and have boards over the windows, unable to cope with the sound of the ever increasing fleets of wagons filling our shops. It might of course be part of a regeneration project by now, possibly a stalled one in alternative 2012. Or in the alternative alternative utopian reality it would in fact be a hive of industry where we still have a manufacturing industry and an economy not based on financiers escalating property prices in one big city. Who know.

Instead we have the Inner Link Road, and Rouen Road in particular which replaces this section. Rouen Road was bulldozed through communities and always feels like it’s in the wrong place. Now we have Normandie Tower; one of two blocks of flats that were supposed to be built here; thrown up at one end, whilst the brave flint and concrete monolith of the ECN (Archant) building extrudes from the pavement at the other with it’s cobbles and giant brass belly. Normandie Towers wins though, it featured in the dystopian film of Memoirs of a Survivor, a film based on the book by Doris Lessing. Apt.

See also this article on Municipal Dreams. for more information on the council housing developments in Norwich.