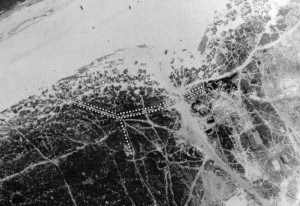 Yet more lumps of concrete, I doubt a the vast majority of people even give them a thought apart from trying not to scratch the car. Bit strange though, 13 ton blocks of concrete in a car park, and on the beach in one of those lovely little Norfolk corners. Winterton, like a lot of the Norfolk coast was a prime target for the imagined invasions of the war and these little babies are Anti Tank Blocks or ATBs, you’ll find them dotted about all over the place, there’s a least two at Thorpe for starters, some at Thetford, I spotted two near Stalham, in fact dotted up the whole coast, inland, all over the place. Well these are the same, anonymously crumbling away for the next however many hundreds of years in the salt air. Each one weighs 13 tons, they are built in-situ and contain of steel re-inforcment. Some of them have tumbled onto the beach, joining the old searchlight building and at least one mortar pedestal at the mercy of the sea.

Built in September 1940 by May Gurney using a team of eight, two blocks could be completed in a day. The same teams of men also built the Radar masts at Eccles and Happisburgh. John Green in an article on the PBSG website also remembers embedding fir poles with steel cables tramadolmain.com strung between them into the fields in the are in case of glider borne invasion.

This area is interesting as well in that it was used as a dummy town and airfields. Towards Somerton a decoy airfield was constructed in the fields around Homes farm, manned by some of the old boys in the area drums full of oily rags were lit to distract the Luftwaffe from trying to bomb Great Yarmouth, Horsey Mere provided a night-time reflective surface that was reminiscent enough of Breydon Water to get the area bombed on several occasions.

The village itself was also targeted later in the war, this may or may not have been due to the presence of a gun battery in the village forming two FDLs or Forward Defended Localities consisting two 4 inch naval guns and various mortar spigots or in fact the Radar in the Winterton Valley Estate. There’s also a post-war Royal Observer Corp (ROC) post in the dunes which you can see remnants of in teh photo above, currently a group of locals are clearing the site of the old Lifeboat station. An interesting bit of coast, also given how close it is to Somerton (See previous piece here) which has stories of its own.

There is a remarkable piece of writing by John Green (MBE) on the subject of Winterton during WW2 here.