Lost in a landscape: Salthouse, touching the past 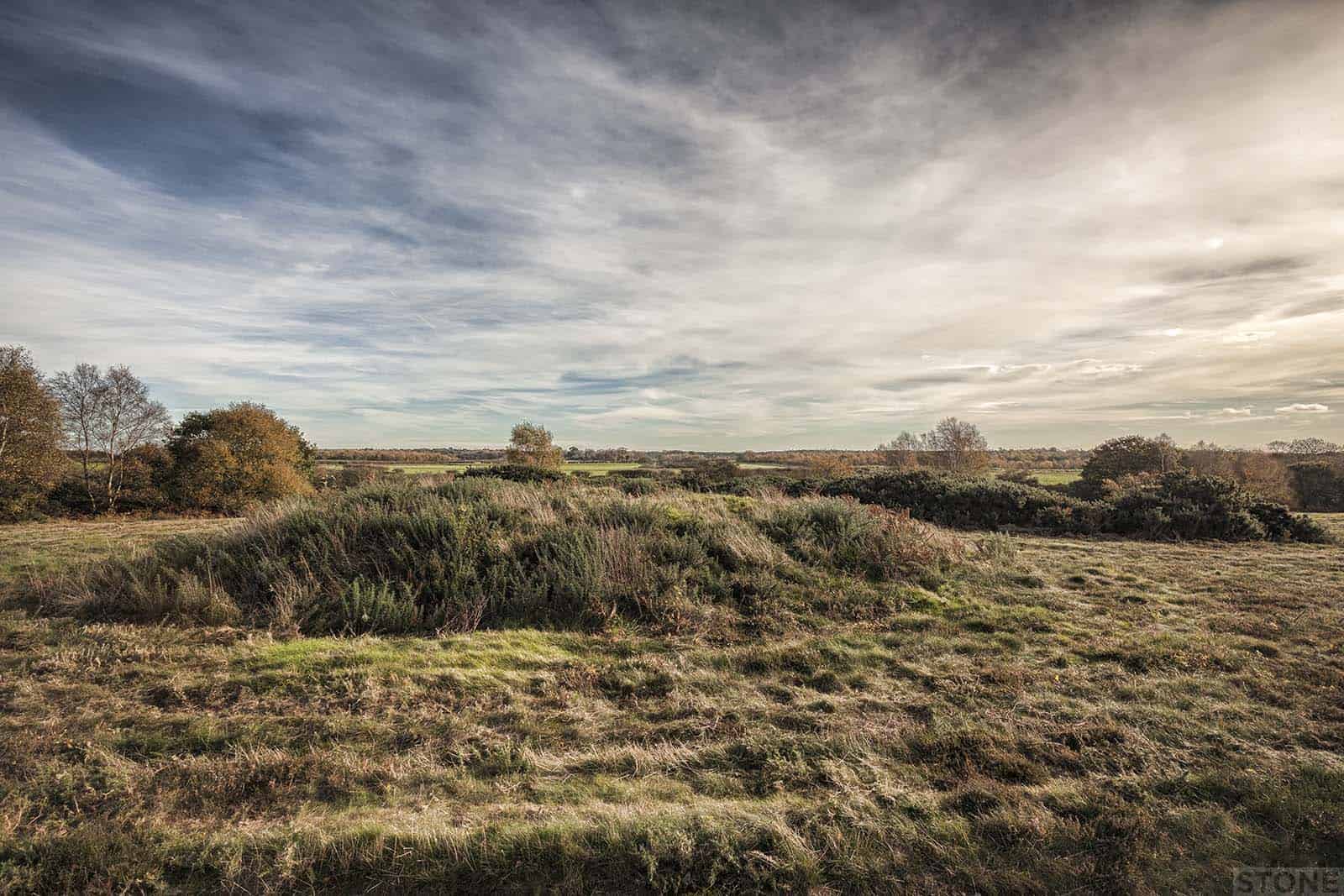 We visited the long dead, stretched our fingers out, touched fingertips through the flint and bracken. North Norfolk has some lovely landscapes, far removed from the outsider idea of some flatland devoid of features. The North County around Salthouse is a rolling and curved patchwork of fields, fillets of woodland and heath, lanes and roads that track the rise and fall. In Autumn tweed squares form from the ploughed in stubble, Geese fly in and feed off the beet tops. Some soils are riddled down to a fine clay till and are already flushed with a light fresh growth of winter and spring crops, occasional fields of sugar beet give way to dried blackening corn. The soil varies from darker clay tills into sandy loams on the slopes of the old denuded glacial moraines that run in a curve along the coast, their crests eroded down displaying the gravels dropped by the ice. For centuries extracted by us along sections of the Blakeney Ridge and the Glaven Valley. I visited a Glaven pit once years ago on some school trip. Bored, we looked for fossils, turned the gravel in our hands.

This does all take me back, further now than ever before. We are up here in the wind and warm autumn air, it’s my birthday. And as I pass another milestone I am more aware than ever of the pasts receding and blurring tracks than normal. My own beginnings are entwined with the others from long before that lie here up on the ridge. Salthouse Heath is itself a survival. It is part of a landscape we have almost lost. Here where the sandy soils were thin there may well have been these natural clearings where the trees didn’t grow so well and gorse, heather and scrub predominated. This scrubby heathland probably formed natural grazing areas and as such, akin to later lost places like Godwick was protected from the plough by virtue of the nature of the environment that it is, where you can’t cultivate it is best to farm animals not crops. 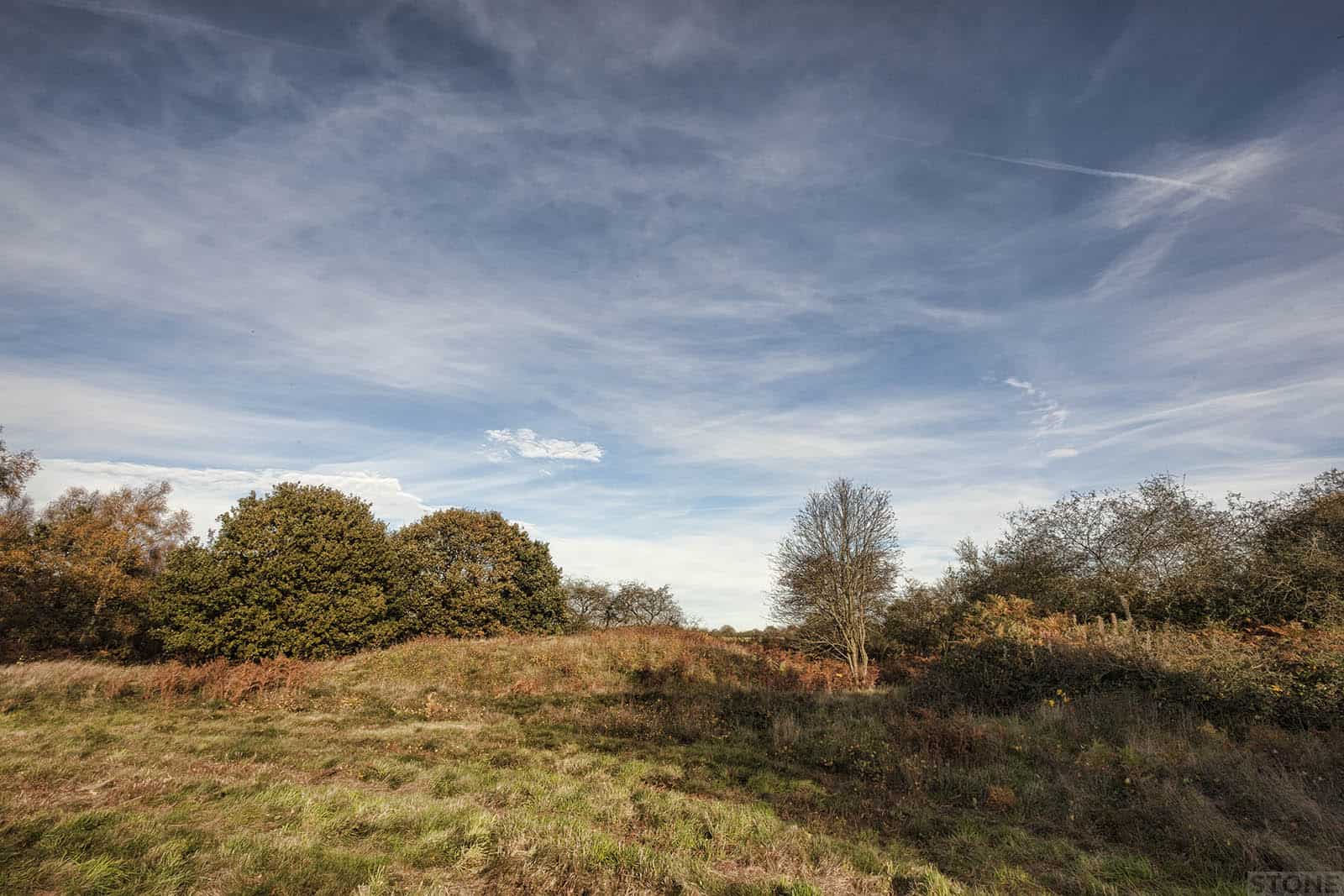 As a result it hasn’t been deep ploughed and plays host to the largest surviving barrow cemetery in Norfolk. There are others, crop marks indicate other areas that were once rich in layers of settlement, memorial, burial and ritual. Cressingham, some lost in Breckland and Roughton to the East. This last is one such place where he evidence has been ground and spread over the centuries. Now it mostly visible only as shadows on aerial photographs. If you dig from the air you can find a cursus, causewayed enclosures and barrows. All were found in the 1980s, and since, as the county was traversed in the low light of the sun or when the land was dry, the profusion is such it hints at a funerary landscape starting at Roundhow Hill and Two Hills which stretched down towards Hanworth and Suffield. More occur as far as Marsham Heath and further south around Horsford where they are flattened out and nearly lost in the pine stands and brush.

Around the heath stretches fine farmland bounded only by taught wire, protecting the landscape of the past from the landscape of production. From the height of the front edge of the ridge where the scrub sits you can sea the grey line of the sea. Below the heath the banked scatter of flint and sand slopes down towards the village of Salthouse and the Marshes; the coastal paths and roadways of Shuck, and the tales of pirates, shipswrecks, Saxons and Danes. The light is nice up here in autumn, the slant of the sun even at midday makes everything feel more faceted and three-dimensional. It is a landscape cast in the rich palette of a countryside sliding into chemical hibernation, as the sap draws down; yellows, oranges, reds and browns, trees shedding leaves, the bracken curling and cut back. Beyond the fences in the fields to the east are hollows surrounded by trees, glimpsed through the crops and hedges from here through to Weybourne, like the shrieking pits of Aylmerton, they dot the landscape across the coast to Northrepps. A mixture of medieval quarry holes, suspected iron mines and marl pits pepper the fields.

Salthouse Heath fortunately wears its legacy on the surface as it has done for millennia. Unspoilt by the heavy-handedness that modern farming brings. Some of the burials sites have dissipated into the fields it is the inevitable attrition of agriculture wearing at the edges of this type of land. There are supposedly signs of thirty burial mounds in the region; from fieldmarks to standing bowl barrows. Some are easy to spot even in the confusion of lumps and bumps that are often the marks of often more recent activity and excavation. There are two barrows in particular which sit as part of a group of five or more suspected burial mounds that are quite remarkable in their completeness. They date to the Bronze Age, probably around three to four thousand years old, possibly older.

As you walk up the back slope from the road that cuts the heath off from Taylor’s Wood it’s difficult to guess where to look, there’s bracken, the trees thin, a wall of mulberry on one side, hips and haws, brambles covered in the desiccated bird-pecked corpses of fruit and eventually grass and gorse. Cupped in dark green spiked crescent lies the smaller of the two. It is known locally as Three Farthing Hill, a name which conjures and plays with all sorts of associations in your mind, it may seem slightly prosaic but it feels like it could come from some now lost story, as buried as the ring ditch is that once surrounded this small hill. It’s not exactly vast in scale, but it still has that magical quality that all these places possess if you know what they are. It’s just a lump in the ground covered in the stumps of dried bracken and grass, but it isn’t. The rabbits have gone to work on one sheltered patch, cutting scoops out of the side. Standing on top there’s is a depression alleged to have been cut in 1850 by Reverand Greville John Chester, marking where he found flint tools and pot shards. some charcoaled remains. The mound was damaged by trench digging in the 1940s when the area was considered a likely landing spot for a seaborne attack as it had been before. The whole area is covered in modern mounds that mark gun emplacements, breastworks and boundaries the beach below scattered with railway sleepers and iron to stop landings. The archaeology of our grandparents lies with the much more distant, itself truning remoter with time. A mower has been around the mound, between the grass stalks lay shards of flint, not knapped but shattered by the blades skimming the earth, each grey facet as sharp as the tools that may still lie beneath.

I have maps, these poor hills are marked and as we move up to the next barrow I’ve tuned in to what we’ve just seen and expect the same, blinded by expectation I just can’t see it. My wife points it out. It is much bigger, nestling hard up against the fence that marks an old but more recent trackway. Partially hidden by bowing trees and bustling bushes either side, it bulges pregnantly. It is nearly perfect. This is Three Halfpenny Hill, a complete bowl barrow; The mound, one ring ditch and bank still in place. We pace it out at around 70 feet in diameter, then stand on top in the long grass, next to more burrows and flint scrap looking across the heath into the sun. I marvel. It would probably have had a second bank and ditch, when examined in 1849 was found to have an entrance way that pointed towards the sea they too would have gazed out from here and seen something like this. This is a handshake with our past. Below this mound lies someone, maybe just fragments of burnt bone in a pot, beneath our feet, 80 generations ago, we are here. 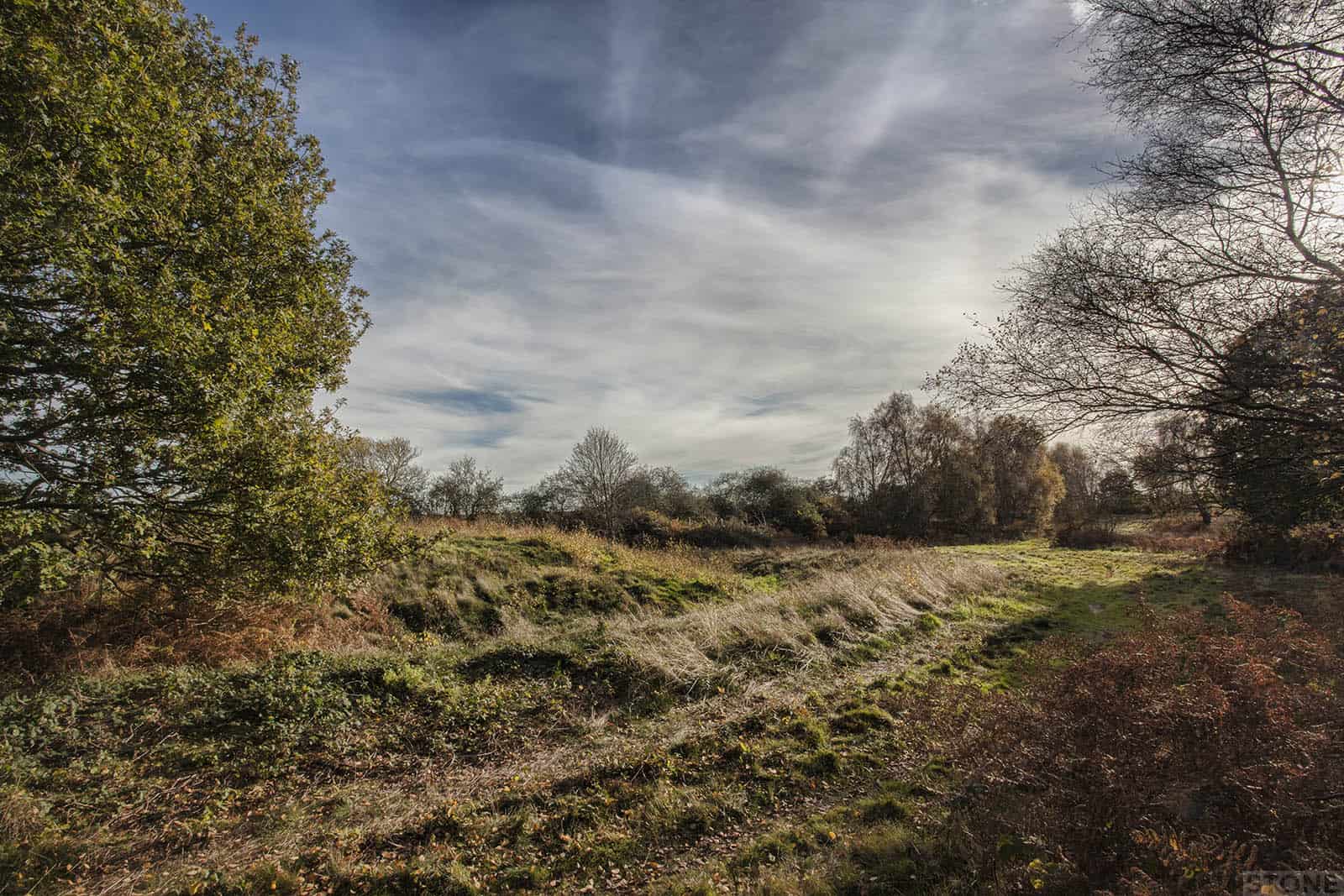