This is the first of a series of posts. These will be based around a collection of found photographs which were pointed out to me by a friend in possession of someone else I know who didn’t really know what to do with them. These were picked up at a jumble sale; a huge set of slides; some 400, around 60 of which are Norwich in the 1960s and 1970s which is where the unknown photographer hailed from we’d think. The rest are from holidays and trips, from Edinburgh to Kent. He or she shot on 120 film and had them converted to 56mm x 56mm glass sandwich slides, the quality is pretty astonishing. We can only guess what they were shot on, but the depth of field on them is fairly shallow in places and not in others which indicates it may have been a camera with a certain level of control over the apeture, the fact that most of them are well exposed also indicates that it was probably metered shooting, not guesswork with a hit and hope camera. Whoever he or she was knew what they were doing and had spent some money on gear, processing and storage. The condition of these now slightly over 50 year old pieces of film is good, some minor foxing and a few marks on the glass, but nothing that can’t be repaired.

They are quite remarkable in the same way that George Plunkett’s work is, as they seem to be a deliberate effort to record certain aspects of the city at a particular point in time, pretty much the same as I do and other people do. Some are specific events, others are buildings, and a few are at a point of change; things closing down, an archaeological dig, a city just before a large series of developments changed it. Some areas have altered dramatically. others are pretty much the same. Most of the Norwich photos appear to be from 1963 they feel like they may have been throughout a summer, a poster in one of a venue indicates June. Others are dated 1973.

What makes them special is they originate in an era when the camera was nowhere near as ubiquitous and everyday as it is now; most people didn’t carry one with them in their pocket, with a few exceptions such as folding cameras this wasn’t possible generally. This was also an era where the cachet of a photo becoming popular held no meaning unless you worked for the press or in advertising. These were shot by someone to record things for the sake of recording them. Seeing these gradually appear on-screen from a digital scanner is always rather magical. Now they have the opportunity to be seen and appreciated more widely, as well as rescued.

It would be nice to put a name to whoever stood behind the camera and stopped time for an instant. There are a few clues, people in some of the images, what could be his or her daughter.

With thanks to Charlie Wilson for pointing them out and Julie Chettleburgh for passing them on. It is important these things are seen, so here we go a selection of the more interesting ones.

Spitfire and Bloodhound missile outside the Bell Hotel. 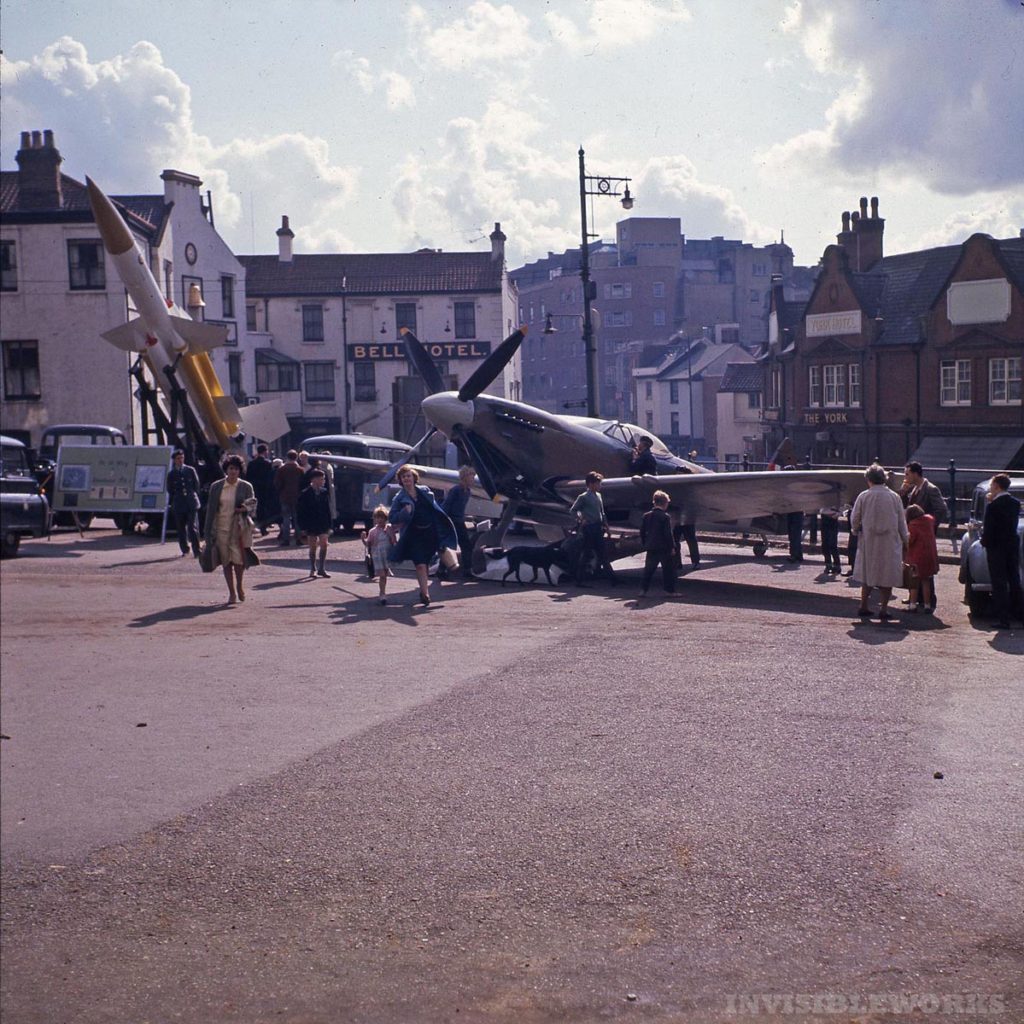 A curious shot which has already caused a few conversations as to exactly what might be going on. both are parked on what was then the Cattle Market, now inside part of Castle Mall. 1963 was the year what we now call the Battle of Britain Memorial Flight moved from RAF Horsham St Faiths to RAF Coltishall, where it stayed for about nine years. The Spitfire is a late mark, you can see from the cockpit cowling, It could be a Mk LF XVIE, and it is possible that it is TE311 which flew over the city in 2016 on Battle of Britain Day, which at the time was being used as a static display aircraft, if it is it had full elliptical wings at the time rather than clipped-wings as it does now. Note also York House was still York Hotel. 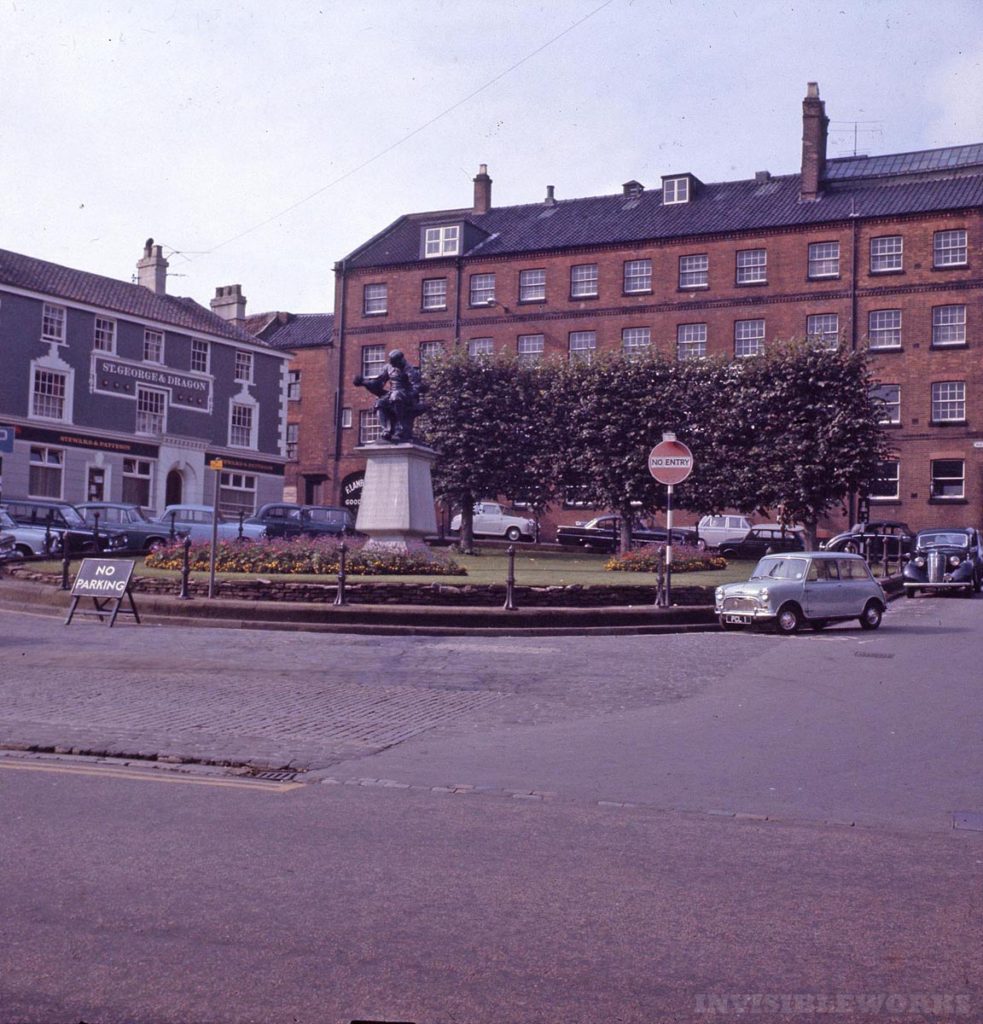 Now of course long gone, this is now next, formerly C&A. Thomas Browne’s statue is still in-situ on the green and there’s parking outside McDonalds which was then the George and Dragon Pub, below it out of shot the Haymarket Cinema, Norwich which was demolished in the 1960s. Lambert’s warehouse went the same way. 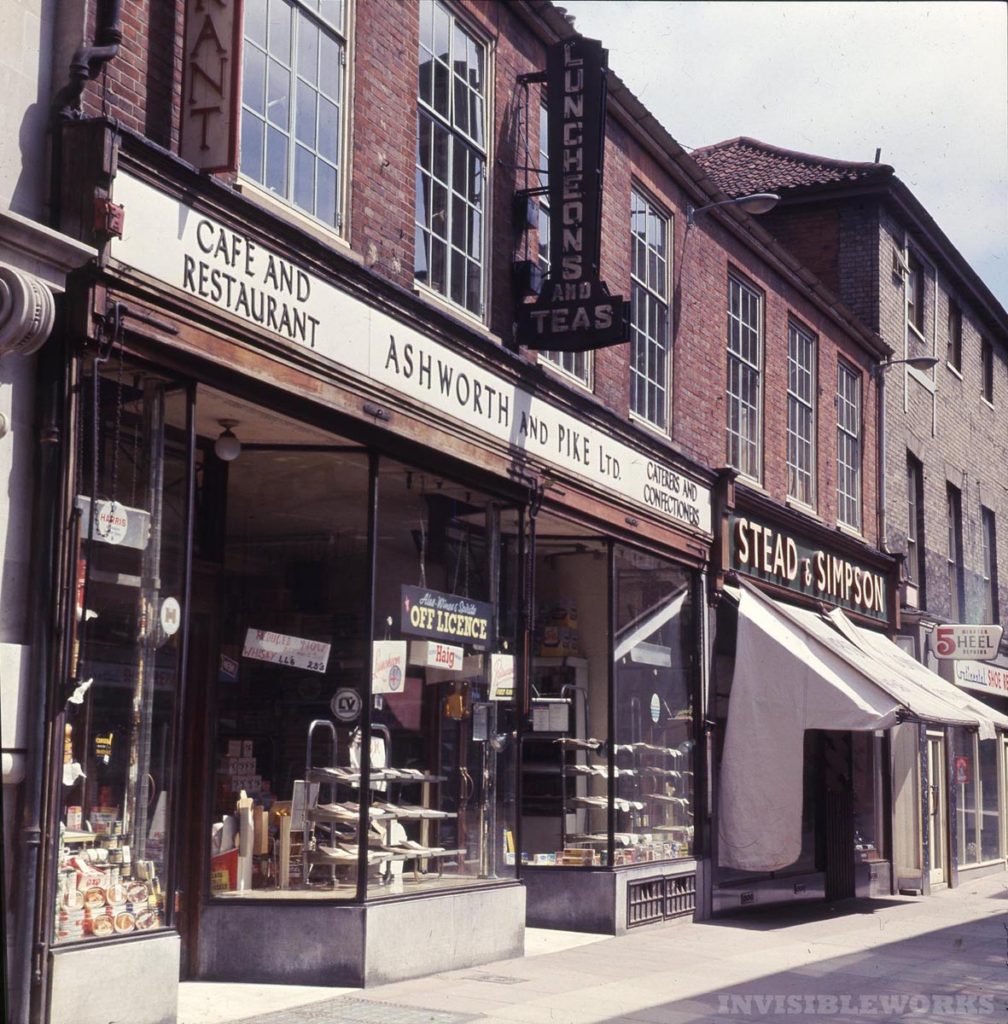 Shot looking in the direction of Castle Street, these are now Jessops, Animal and City Bookshop. Ashworth and Pike owned six shops in Norwich at their peak and ran a bakery and confectioners to supply them. 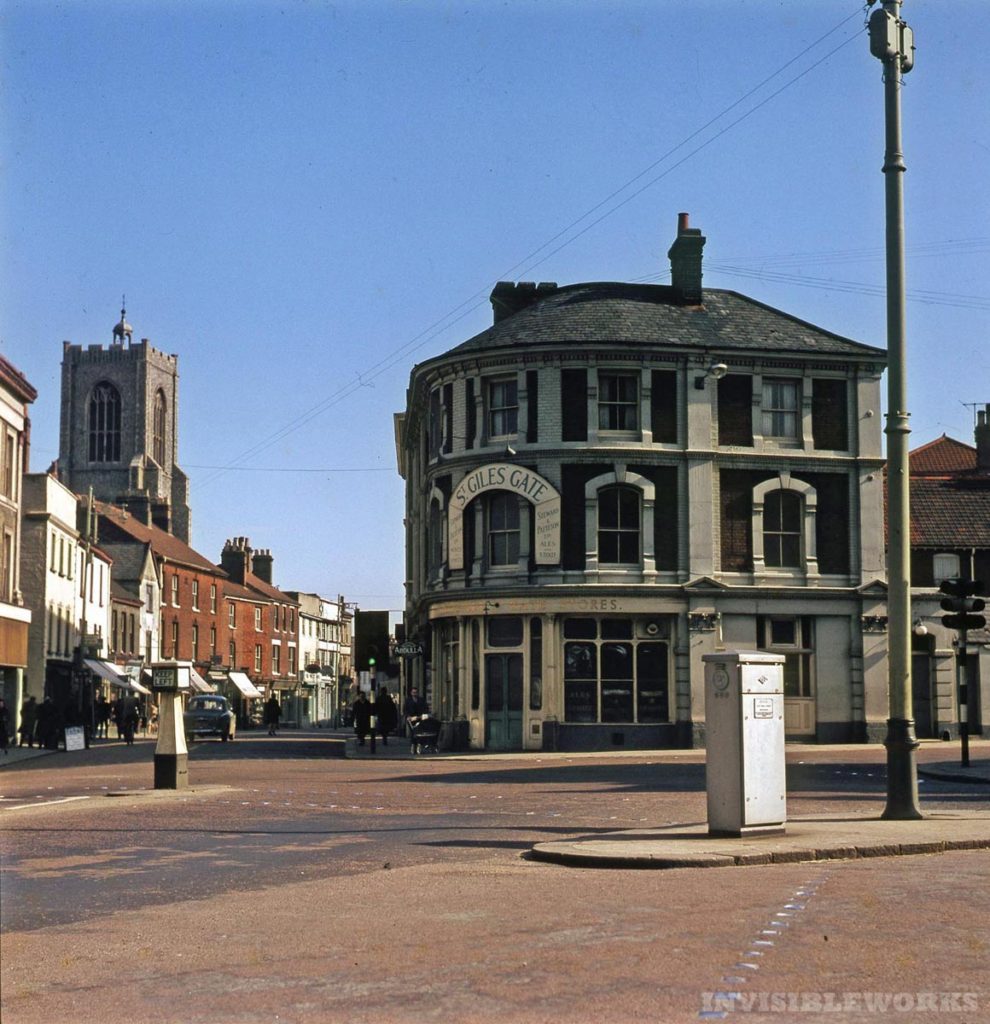 Formerly the St Giles Tavern this stood on the corner of Upper St Giles and the junction of Grapes Hill and Chapelfield Road, Norwich. Listed as licensed 1867 to 1965. The building was subject to a compulsory purchase order and demolished to make way for the ring-road. The original crossing here would have taken you straight onto Earlham Road and access to Unthank. 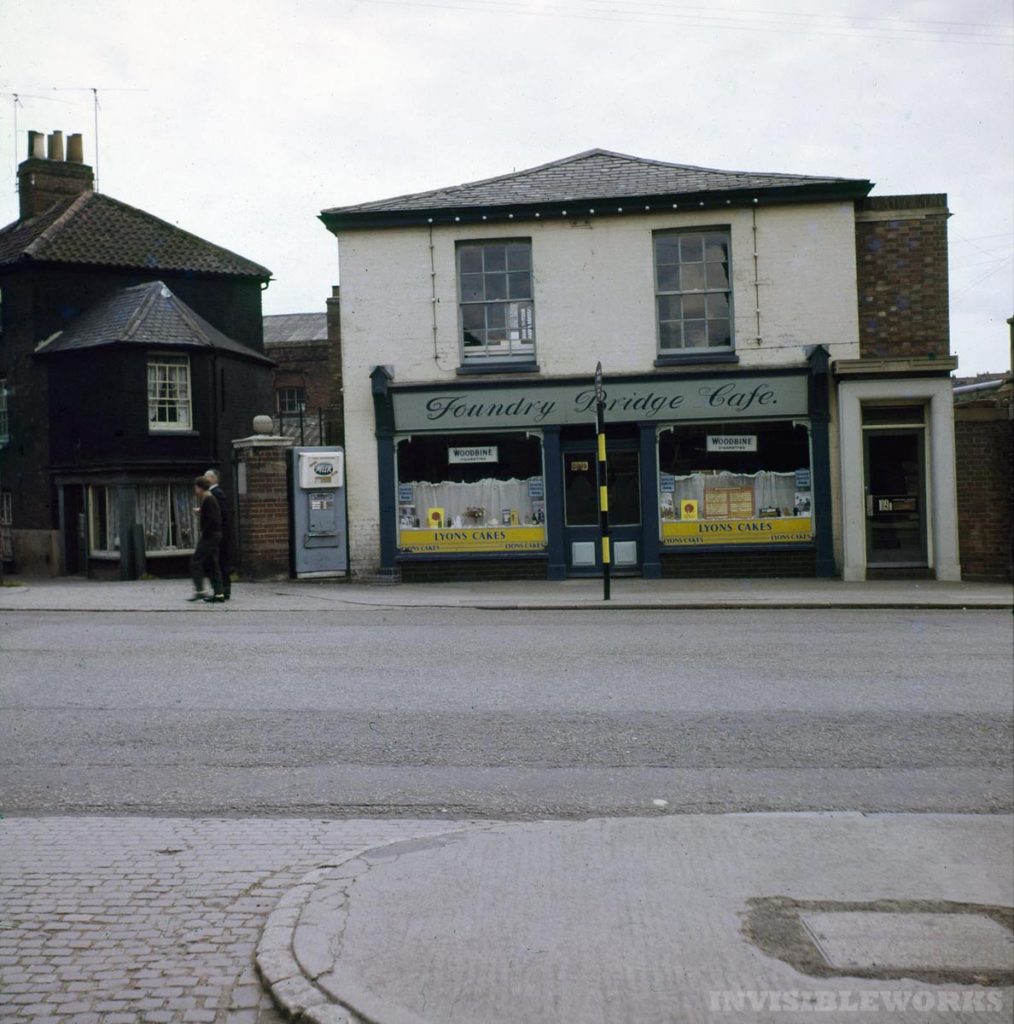 Exact location unknown, but if you look at the last photo at the next photo it appears to be the same building at the end before the Great Eastern Hotel, but early twentieth century adverts indicate it was ‘The first cafe over the bridge coming from Thorpe Station, Norwich – Salt Beef and Ham a specialty’. The proprietor in 1929 was M. Nattrass. 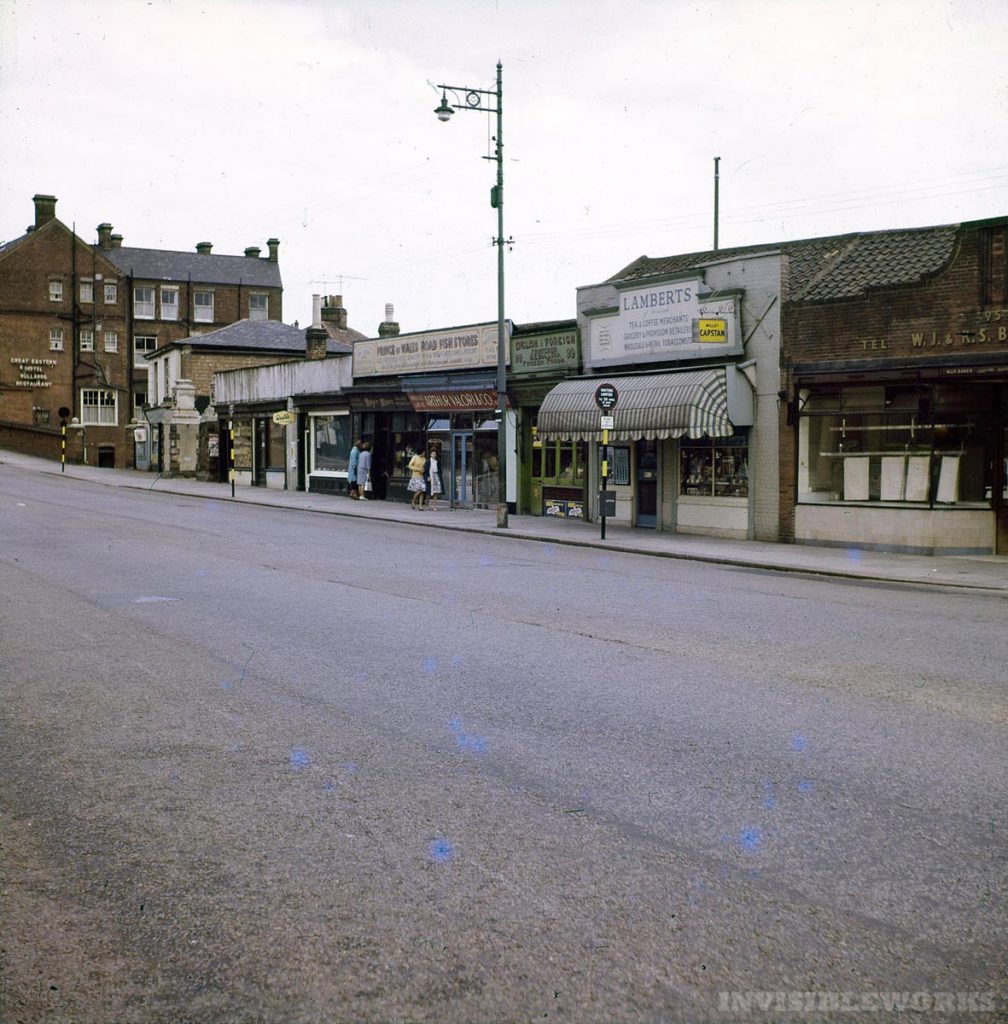 A nice littel assembly of slightly run down shops, left to right: Major Mace – Gold and Silver dealer, One of the many Valori fish shops; the Valori’s were one of the many early twentieth century Immigrant Italian families whose industriousness came to dominate certain trades in the city along with the Peruzzis, Carreras and Marcantonios. Bullocks Fruiterers, and another Lamberts tobacconists, ubiquitous across the whole of Norwich in the 1960s. All gone in a redevelopment in the 1960s. 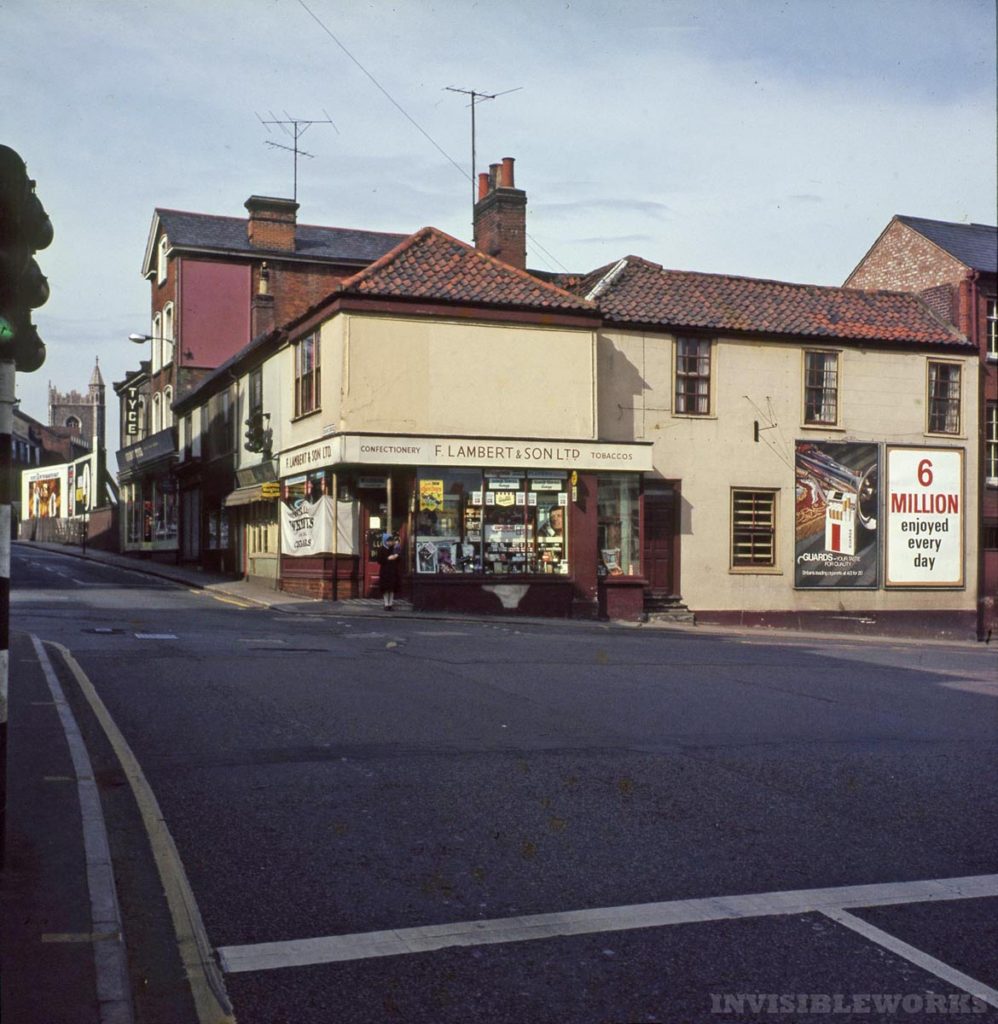 On the corner of the now widened St Andrews Braod Street (and Charing Cross) stood this little confectioner and tobacconist, another one of the Lambert stores which stood across the city. In the background to the right you can make out the tower of St Lawrence which stands between St Benedicts and Westwick Street. 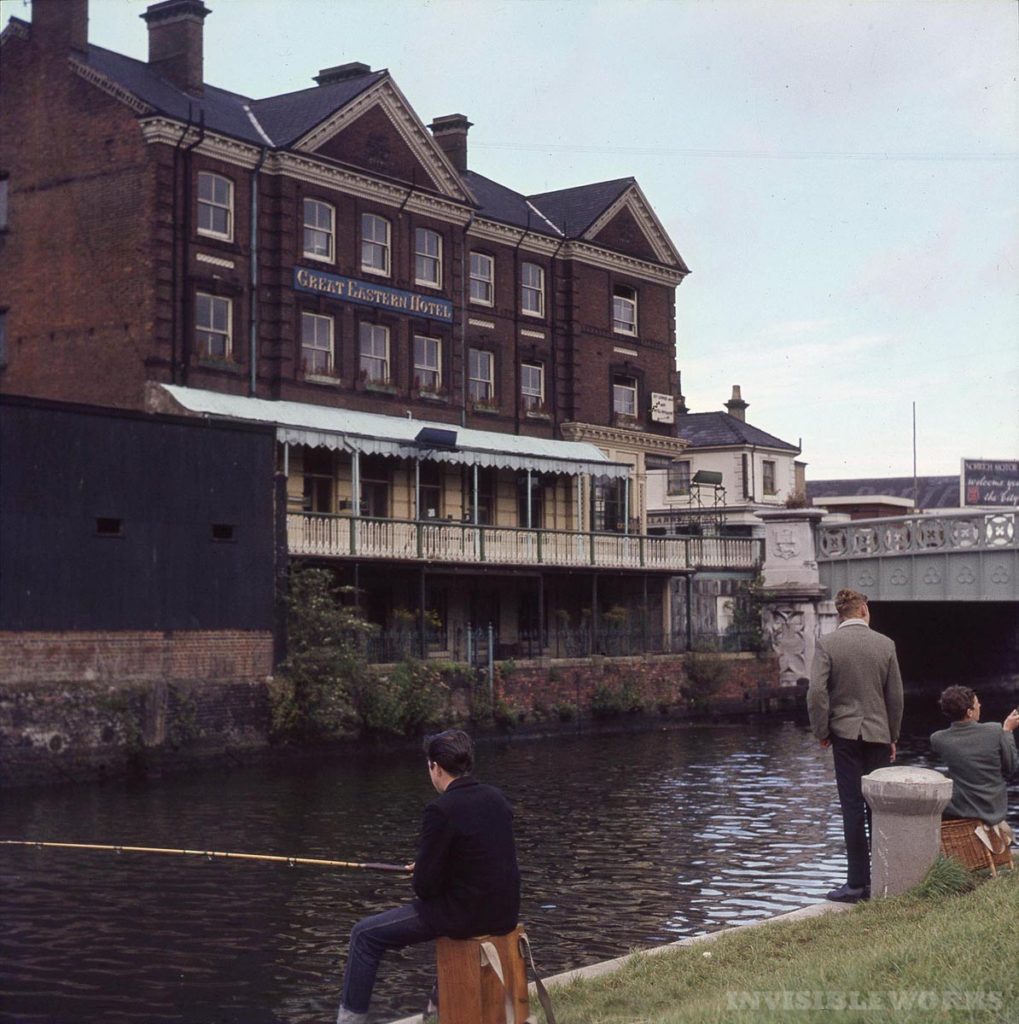 What is now Hotel Nelson Norwich, a Premier Inn as far as I’m aware. It was demolished in 1963.

Special thanks to Julie Chettleburgh.